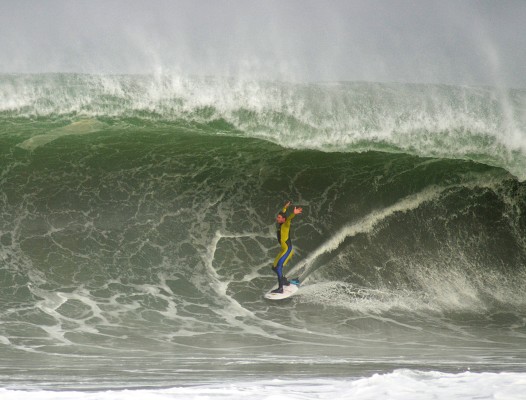 Alex Gray drops into legacy with perhaps the heaviest wave ever surfed in South Bay history. Photo by Jeremy Lubben

Greg McEwan went for his early morning surf check with his gear in the truck. After checking the Redondo Beach Breakwall, he went home to make his kids breakfast.

“I was gone for 45 minutes, came back and the waves had jumped from 12 feet to 25 feet plus,” he said. “Lifeguards shut the wall down for jumping off. With a short interval swell, the waves were as consistent it as it gets. It was relentless, like during the El Nino Swell of ‘83, when I was in 8th grade.” 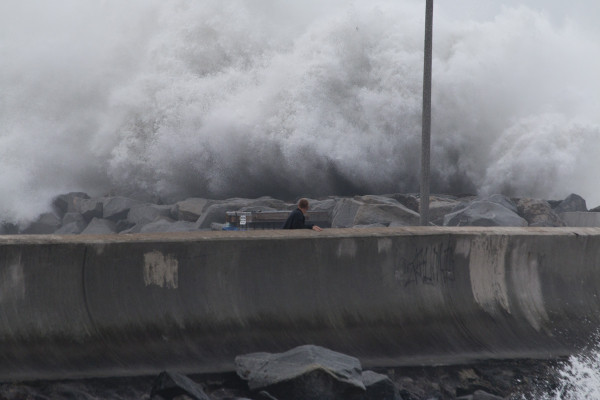 The swell wrecking havoc on the Break Wall. Photo by Brad Jacobson

“Everybody paddled out when it was smaller and then they were stuck out there with the swell coming in so fast. It was not clean or offshore and everybody took heavy beatings,” McEwan said. “There was some panicking in the line-up. It was a life or death situation.”

A lifeguard boat tried to rescue some of the surfers. With an increasing swell and the unpredictability of the line-up, the boat turned away,

“It was insane — the biggest day I have ever seen, and I’ve surfed every big swell since I was a kid, twice with only four people out,” McEwan said. “Hats off to all of them.”

The surfer that seemed to be on everybody’s mind was local ripper Chris Wells. 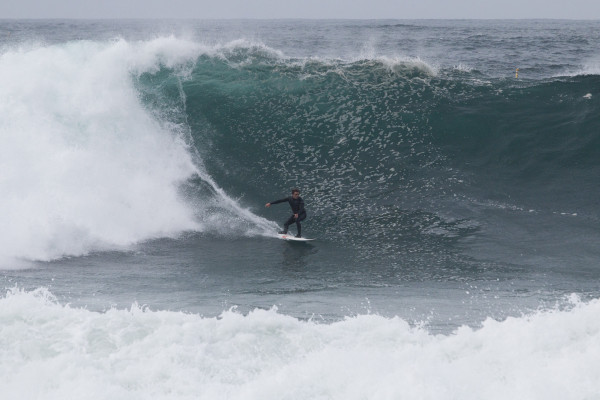 “Wells caught the best waves of the day, after catching a few of the mid-range waves when  some of the surfers went in,” McEwan said. “He paddled back out. Chris is a nutpack.”

Wells showed up right when the lifeguards and police began to close off the Breakwall.

“I saw that the cop was preoccupied so I made a dash for it.” he said. “It was high tide and the swell was building, so I couldn’t get all the way around to the jumping off point.”

“I had to thread the needle into between the peaks,” he said.

The swell continued to build.

“It changed so fast, breaking on the boil with waves feathering by the buoy.” he said. “It was high tide and really dicey, one swell on top of a swell, wreck over wreck, overamp frothing.”

Out on the horizon, Wells could see a massive set coming to slam the line-up.

“It was a four wave set,” he said. “I was so far out, I could see the back of the Avenues. I’ve never been so far out in my life.” 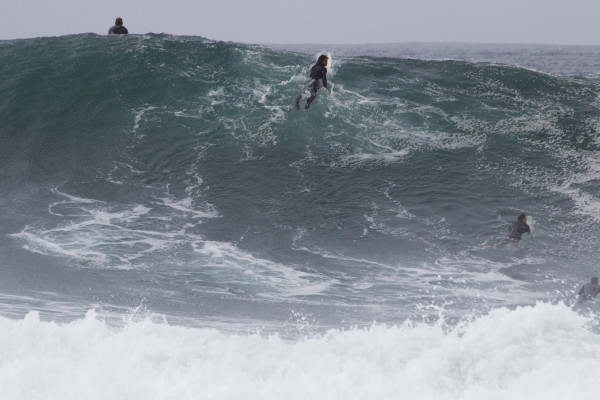 Scratching over the set. Photo by Brad Jacobson

Eyes were “racooning” as the surfers began scratching west. Steve Howe made it over the first three and saw the fourth begin to break.

“After getting over the third one, a huge sloop, I saw Steve duck dive the fourth one,” Wells said. “I thought to myself, ‘If he’s doing it, I can too!”

Howe’s duck dive sent him all the way to the bottom, where he sprung off the sand, thirty feet below. Wells punched through, but got sucked back over the falls.

“I gave my Lost’ 7-foot-2 gun a bear hug while falling all the way down to the trough backwards,” he said. “Everything went quiet before I shot up and was tumbled four or five times before almost being washed to shore. It was a Hawaii style hold-down.”

After taking the longest hold down on record at the Breakwell,  Wells went back out.

“I wasn’t going to let this one beat me,” he said. “The next time a set pitched over me, I just ditched my board, like the other surfers.”

By this time, the line-up either caught a wave in or just paddled in. Wells watched a lifeguard try to help out a few panicky surfers.

“A few of the guys were like, ‘Yes I am totally out of my element,” he said. “Greg Browning paddled somebody in on his broken board.”

The waves were beginning to become impossible to catch as the wind whipped up a coastal eddy. The sailboat racing buoy, half a mile out ripped from its mooring.

“I saw the buoy go over the falls. It was heavy,” Wells said. “With the swell increasing….it was time to go in.” 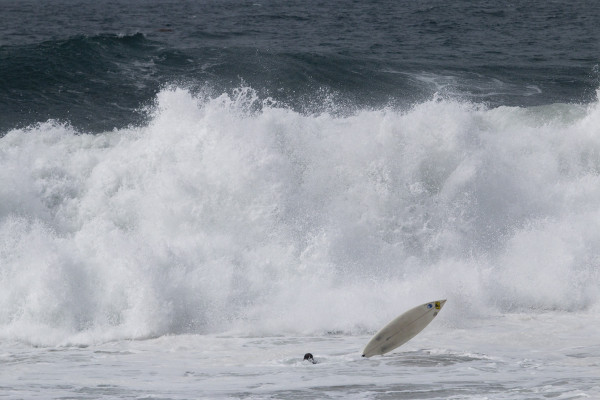 Randy Meistrell about to take a heavy beat down. Photo by Brad Jacobson

“I came in on a huge right and went to shore,” Well added. “The gnarly thing is, the El Nino swell of ‘83 was manageable. This swell was bigger, breaking further out, with more violent conditions. The heaviest day I’ve ever surfed.”

After the line-up cleared and the police closed off access to the breakwall,Chris Rodriguez, with his eye on winning the “South Bay Big Wave Challenge” sprinted down to the  the Hermosa and while pretending not to hear the lifeguards shouting stop, jumped off the end.

“He paddled the mile back to the break wall,” Wells said. “By this time it was too big and gnarly and after waving off a jet ski three times, he accepted the jet ski’s offer of a ride back to the harbor.” 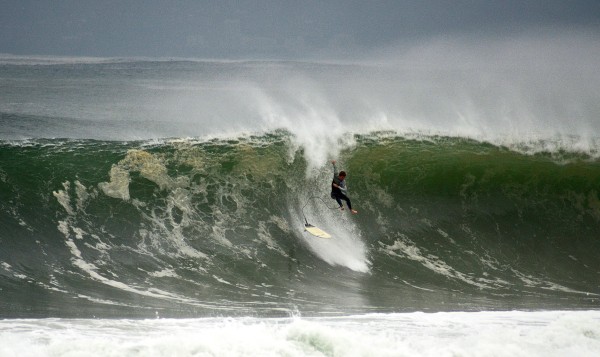 Young Conner Beatty about to take the axe. Photo by Jeremy Lubben

Sunday, the following day, Wells paddled back out  with only three other guys in the line-up and surfed for four hours.

“The cops, lifeguards, and fire department still had it on lock down. They overreach, to the guys that have been surfing this place for 20-30 years,” he said. 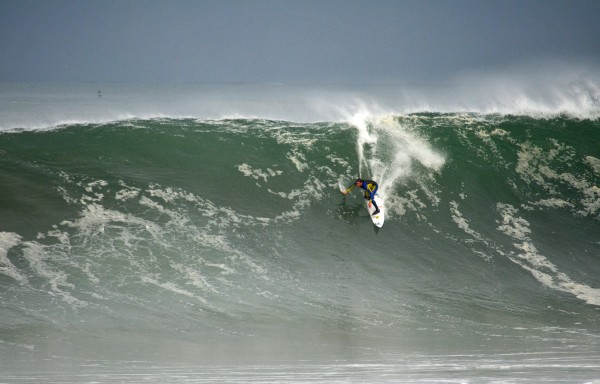 Alex Gray surfing a wave that shouldn’t be breaking in the South Bay. Photo by Jeremy Lubben

Other South Bay surf spots were also lit up by the swell.

65-year-old surf legend and Hermosa Beach Surf Walk of Fame honoree Mike Purpus was out in front of his apartment in Redondo Beach catching a few and taking a few 10-footers on the head One wave pushed him all the way to the bottom, where he had to do push-ups to get to the surface.

“The Avenues were 10-foot and the hill was at least twenty,” Purpus said. “Hags looked like Raglan, New Zealand.”

Even on a small day, the Torrance Beach “Burnout” break packs a lot of power. Surfers Alex Gray, Timmy Reyes, Connor Beatty, Steve Howe, Will Reid, and Natalie Anzivino all took waves in that past would have been deemed unrideable. 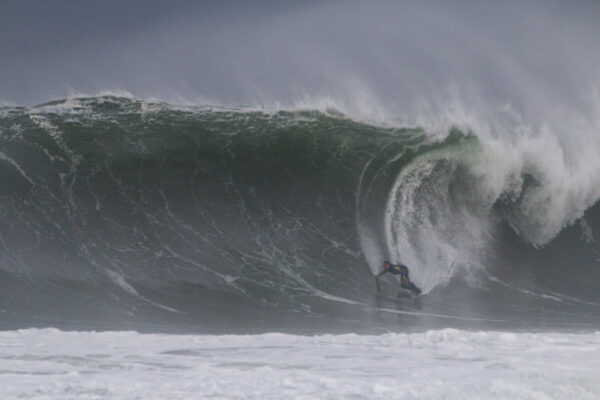 Gray, a 27-year old Palos Verdes native, is a rising star on the international big wave circuit and free surfing scene. Everybody was waiting to see what he’d do on the biggest day in recent South Bay history.

“We figured when I was getting some of the sets at B-wall, Alex got that bomb,” Wells said.

“The bomb,” as Wells described the 25-foot shorepound, just might be the biggest and gnarliest wave ridden ever in the South Bay. It’s a wave that dropped Alex Gray into the legend category and will long be talked about.

“His bomb looked like Puerto Escondido and not from the South Bay,” well said. “With Alex’s big wave training and experience, only he could of or wanted to pull off that wave.”

Editor’s note: The author is the editor of DropZoneLA. ER

For footage of the day: easyreadernews.com/81054/redondo-beach-breakwall-big-gets-video/