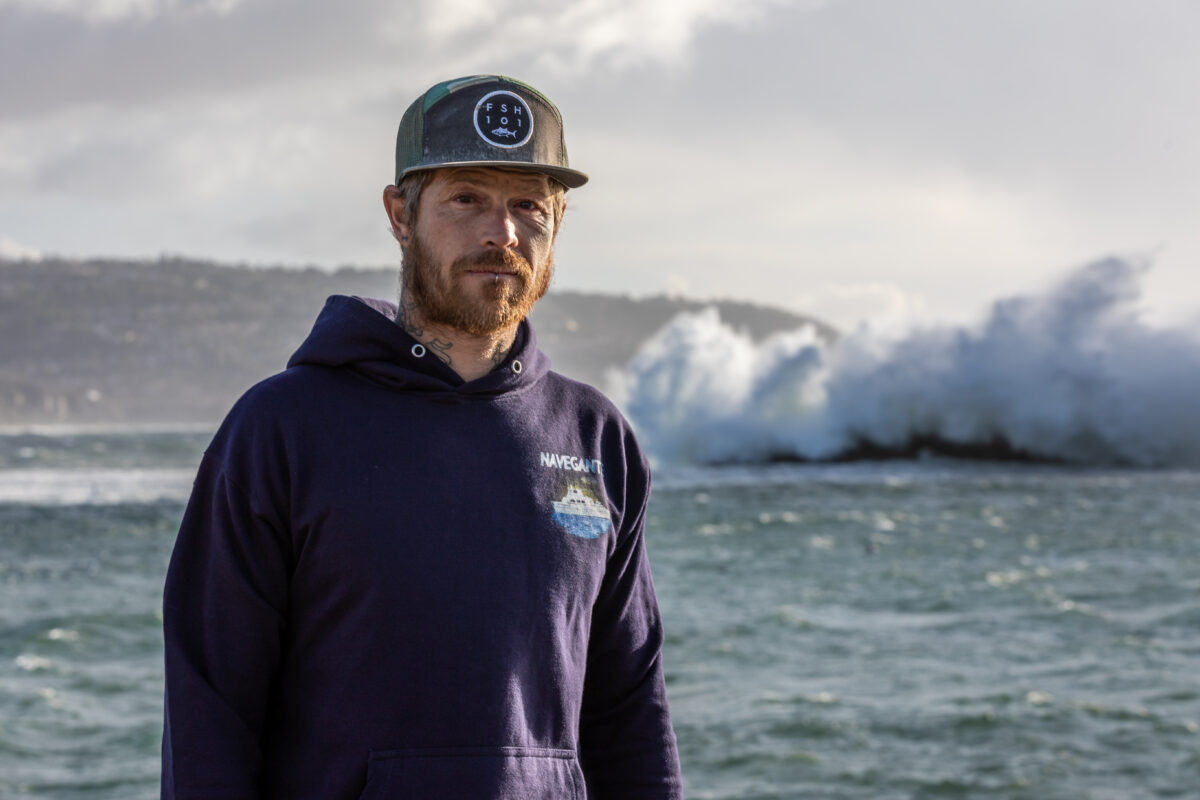 An unflinching look at a son of the beach

Nick “Flinch” Padilla claims to have never put on a dry wetsuit, a testament to being in the ocean just about every day since he learned to surf.

That is not to say he’s had a healthy life.

He smoked pot for the first time at age nine. By high school he was drinking heavily and taking speed, two drugs that seemed to go well with his two other obsessions: music and surfing.

When he was 14, he and his friends founded STDs, a punk band that was still performing locally, prior to the pandemic.

He spent two decades strung out, while working as a house painter and commercial fisherman.

Flinch got sober four years ago and recently achieved his longtime goal of earning his captain’s license for commercial fishing.

“But even though I’m sober, a lot of people will tell you I’m just as nuts,” he said.

Flinch was born at Torrance Memorial hospital in 1983. His parents had a home at 126 First St. in Hermosa, but from what Flinch remembers, he lived in the water.

“My dad brought me down to the beach right there. He put my feet in the water and he said, ‘This is where you’re going to spend the rest of your life.’ That pretty much settled it. I’ve been in the ocean literally every day since.”

He spent his days surfing and spearfishing near Redondo Harbor. His parents divorced and his father left before he entered high school. By then Flinch had already gained what he thought was a healthy disdain towards authority figures.

“The summer between second and third grade is when I hit my first joint,” Flinch said. “We’d find butts in the sand and light them without thinking about it. Just being kids on the beach.”

He grew up with Tommy Banas, the son of legendary local waterman Tim Banas, who Flinch considered “like a second father,” when they were younger.

“He was a surfer kid,” Tommy Banas said of Flinch. “Barefoot, no underwear, butt crack hanging out.”

The elder Banas taught the boys to spearfish. They surfed, skated and rode BMX every day they could. Flinch never graduated from high school, while Banas graduated from Redondo High.

“I used to go to school, get dropped off, then turn around and skate right down the hill to his house,” Banas said. “Then we’d go skate or get stoned. Because his parents didn’t care if he went to school or not.”

An exaggerated reaction to a friend pretending to punch him earned Padilla the nickname Flinch. It never bothered him and today his friends, family and coworkers still call him that.

“It was just a different time, living right there on First Street. Everybody knew who we were. We’d go to the beach by ourselves and our parents didn’t have to come with us,” Flinch said. “I just couldn’t see myself moving away from it. The ocean has saved my life a thousand times.”

He met fellow STD’s band members in 1996 and they quickly built a reputation as rowdy punk rockers, with lyrics filled with rage and distorted melodies. The few venues that booked the band usually only did it once.

“STD stands for anything you want it to stand for,” Flinch said. “ Surf to destroy, set to destroy. Socially troubled delinquents is one of my favorites.” 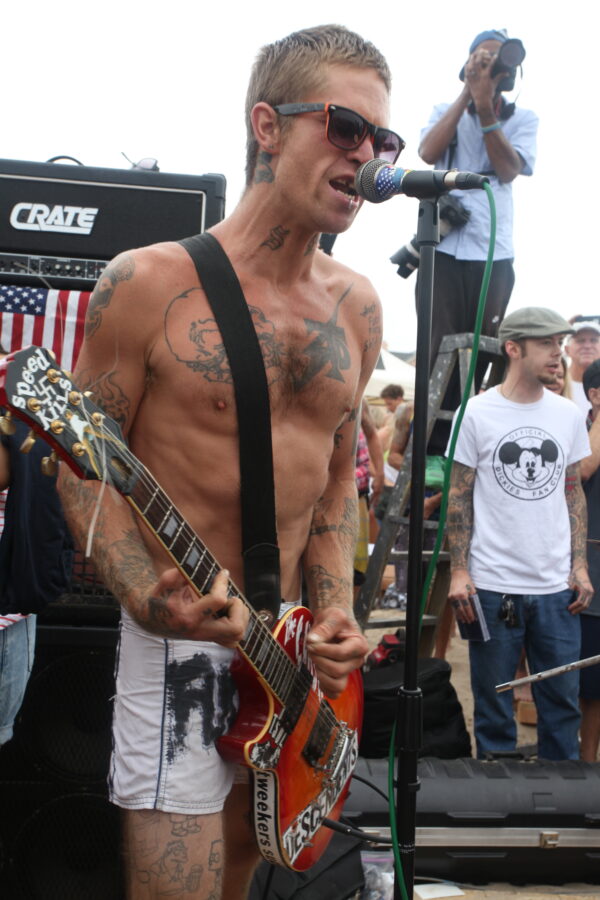 Nick “Flinch” Padilla performing with the STD’s at the Hermosa Beach Ironman in 2015. Photo by Kevin Cody

Their lyrics reflected the anti authority, go for broke mentality common to surfers.

Surfing was Flinch’s escape from a troubled childhood, while punk music became a place where he could stop running and begin to express himself.

“We played everywhere,” Flinch said. “All the venues along the Sunset Strip. I played with every band that I grew up listening to. We did a lot of cool stuff.”

The surf culture in the Beach Cities overlapped with the punk stylings of the late 1990s in a number of ways. Partying and punk music was what a certain sect of surfers did once the sun went down.

“Surfers like to make trouble, too,” Flinch said. “Greg Noll figured out if he painted a swastika on his surfboard it would piss people off. When it made them mad, he’d just paint two swastikas to piss them off twice as much.”

While the STDs were booking shows across LA County in the late nineties, Flinch was also surfing and working for Tim Banas as a house painter.

He drank up to two fifths a day and became an IV meth addict, for nearly two decades.

He kicked speed first, in August of 2014, choosing to detox on a small boat in Redondo Harbor.

“I finished all my stuff, laid in my bed and rode it out,” Flinch said. “I lived off of granola bars, Gatorade and vodka for 10 straight days.”

Around the same time, he began working as a lobster fisherman. That’s where he met Mike Jimenez, who had recently stopped drinking, himself. Jimenez said Flinch showed up that year to help fix lobster traps and hasn’t left.

“We did sport fishing for at least seven years after that,” Jimenez said. “I spent more time with Flinch on that boat than I did with my own family sometimes.”

Flinch would show up to work smelling like booze, Jimenez said, but he was never sloppy. He was a functional alcoholic; one who drank to get through the day as opposed to getting blackout drunk. 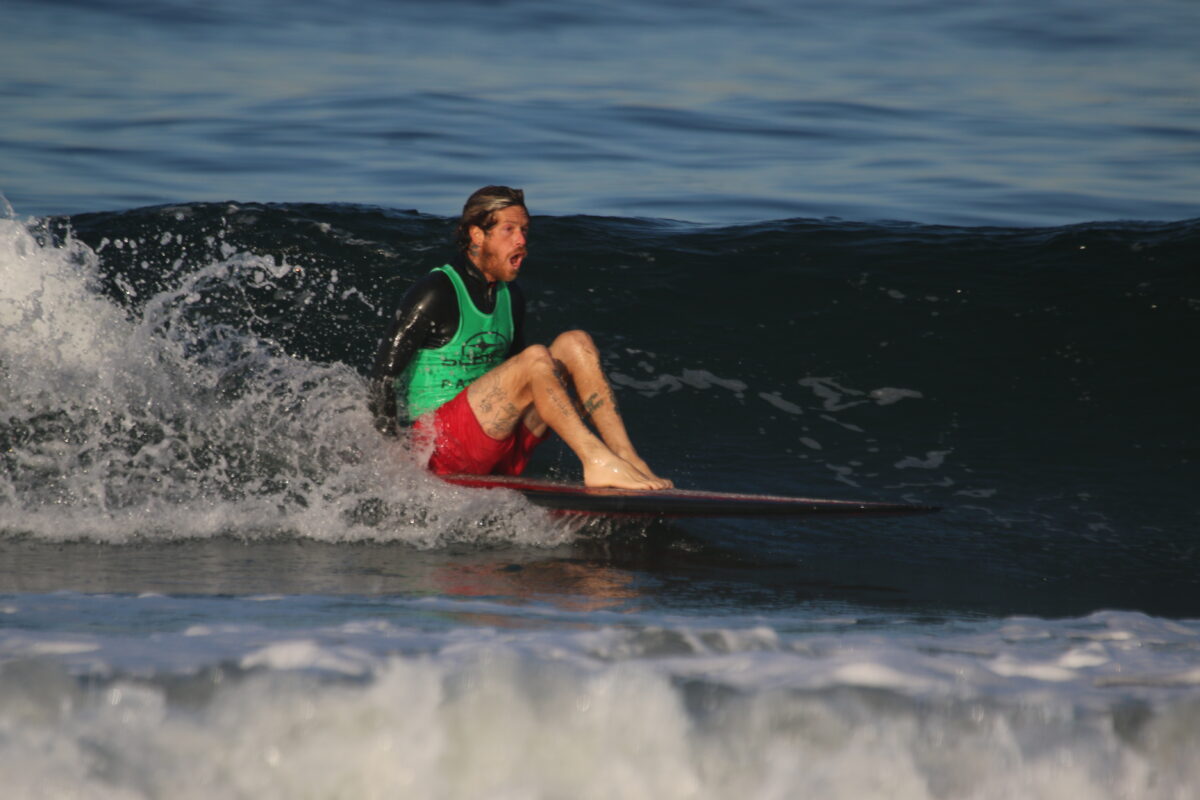 Jimenez and Flinch would spend hours on the boat talking about life. Flinch said Jimenez helped show him a way of life that didn’t require drinking.

Flinch quit drinking officially on May 21, 2016. Today, he’s a member of Alcoholics Anonymous and helps other struggling alcoholics attempt to maintain sobriety.

That’s Captain Flinch, to you

The busiest time of year for commercial fishermen is between May and September. In the wintertime, Flinch and his fellow captains give whale watching tours on the weekends to stay busy.

During the summer, a normal weekday sees Flinch getting to his boat, “Navagante,” (formerly the “City of Redondo”) at 7 p.m. and getting it ready to load fishermen. They take off soon afterward, driving all night to the fishing spot and dropping anchor, stopping only to get bait.

In the morning, Flinch will get some rest while the other crewmembers cook, wake up the passengers and help them get ready to fish for the day. On the way back crewmembers take turns bagging and tagging the fish their passengers caught during the trip.

“Unload the passengers and the fish, then load new passengers, like it’s Groundhog Day,” Flinch said. “Sometimes you’ll be on the boat for 13 days and we’ll have our friend’s wife come and wash our clothes for us.”

It’s no wonder why some commercial fisherman turn to alcohol or drugs to pass the time at sea, he said.

“We’re obviously a little loopy out here. There’s no reason a normal person would want to do this and a lot of people try. We like to say we have salt water in our blood.”

Flinch went to captains school in December 2019. The year long program includes a background check and vetting by the Coast Guard. The licensing test isn’t easy either — especially for Flinch, who never graduated from high school and got his first driver’s license just two years ago.

“My captain’s license finally came in about three months ago,” Flinch said. “It was a huge rigamarole to get the whole thing done. The lady at the Coast Guard is amazing. I still feel I should bring her flowers.” 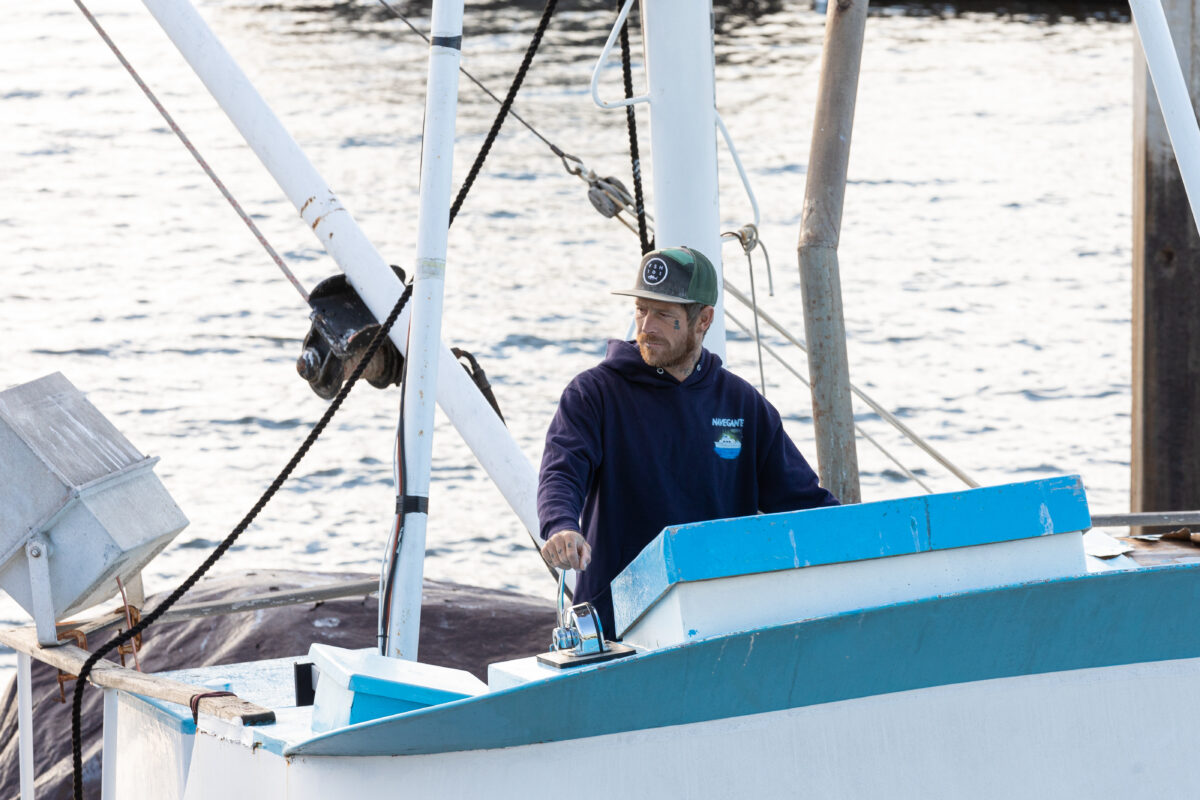 But even as a licensed captain, Flinch has found ways to rebel and preserve his punk sensibilities. He isn’t scared to let people know what he thinks. Like many commercial fishermen, Flinch has a deep hatred for sea lions, calling them the pests of the sea. He  wears a shirt that says “Do Your Part,” above a drawing of men beating sea lions over the head with bats.

“They scare off all the fish and we can’t make any money,” Flinch said. “Even though they have a brain the size of a BB, they still know the sound of our mackerel boat motors and will jump off and follow us around.”

A sea lion jumped out of the water and bit his friend’s dog in the stomach so badly it’s entrails were hanging out.

“He shoved them back in, wrapped the dog in a towel and ran off the dock,” Flinch said. “It was bad, really bad.”

There’s a confidence in Flinch found only in people who’ve been to hell and back. It’s one of the gifts of recovery.

“Most of the dudes in the punk rock community found recovery,” Flinch said. “And the ones who didn’t died. I’ve lost a lot of friends.”

Flinch still spends every day on or in the water. He plans to keep driving boats and fishing, then  move into tugboating. Flinch said the ocean saved him — that, and his fiancé, whom he plans to marry in 2022.

“The same place my dad put my feet in the water is where I asked my fiancé to marry me,” Flinch said. “She said, ‘Yes.’”ER