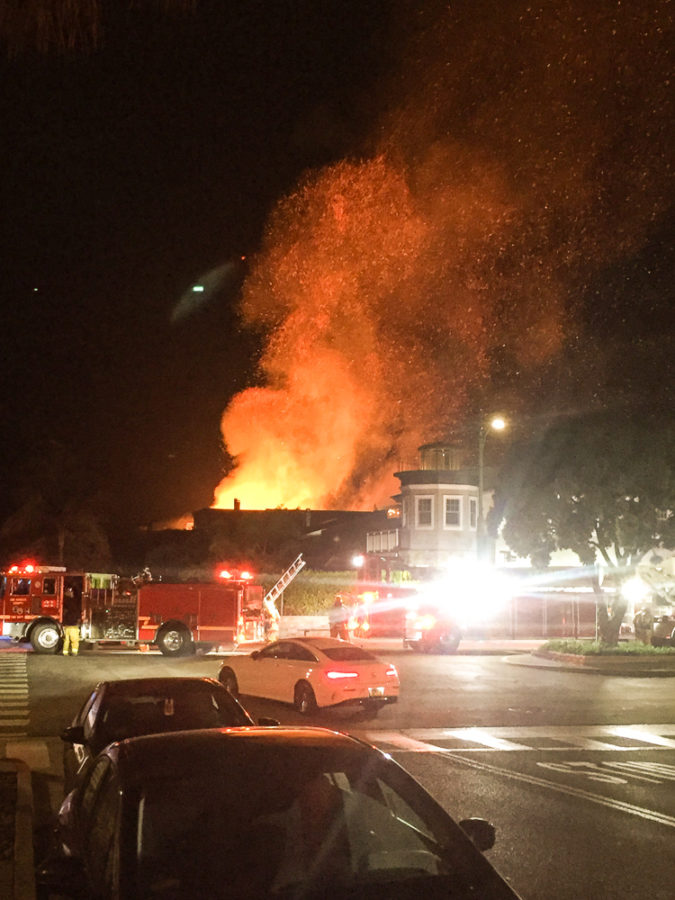 A fire early Thursday morning destroyed a home under construction on The Strand. Four nearby homes were also damaged. Photo by Pete Hoffman

Officers with the Hermosa Beach Police Department have arrested a second suspect in the fire that consumed an under-construction home on The Strand early Thursday morning, and have released the man initially accused of igniting the blaze.

Police arrested Keith Yessner, a 50-year-old La Quinta resident, on suspicion of arson Thursday evening. According to an HBPD statement, Yessner was arrested about 10:15 p.m. in the 1600 block of Beach Drive, about eight blocks from the home that went up in flames.

Los Angeles County Fire Department Station 100 on Pier Avenue received reports of a structure fire in the 800 block of The Strand at 1:54 a.m., according to a statement from the city of Hermosa Beach. Firefighters arrived by 1:59 a.m., and summoned additional units at 2:13 a.m. to battle the large blaze. As many as 75 firefighters contributed to fighting the fire, which was knocked down by 3 a.m.

It is common practice for police officers to respond to structure fire calls, and HBPD cruisers arrived at the burning home before the L.A. County Fire engine, Gaglia said. After ensuring that no one was inside the home, witnesses told police that they had seen a man take off running. Police found Kotva a short distance away, and booked him into the Hermosa Beach Jail about 2:30 a.m.

At the time, police believed that there was sufficient evidence to link Kotva to the blaze based on his proximity to the fire and statements he allegedly made in interviews with officers immediately following his arrest, Gaglia said. He was not in possession of an accelerant or mechanical lighter when taken into custody.

At some point Thursday, arson investigators with the L.A. County Fire Department, who are handling the investigation, interviewed Kotva and concluded he was not responsible. About 7:30 p.m., acting HBPD Chief Milt McKinnon told the crowd gathered at Hermosa’s State of the City Address that police were preparing to arrest another suspect.

Police were able to link Yessner to the blaze through security camera footage from nearby homes. According to a statement from Gaglia, HBPD officers viewing the footage recognized Yessner,  and began looking for him throughout the city.

Yessner was arrested without incident, Gaglia said. According to online records from the Los Angeles County Sheriff’s Department, he is being held in lieu of $75,000 bail.