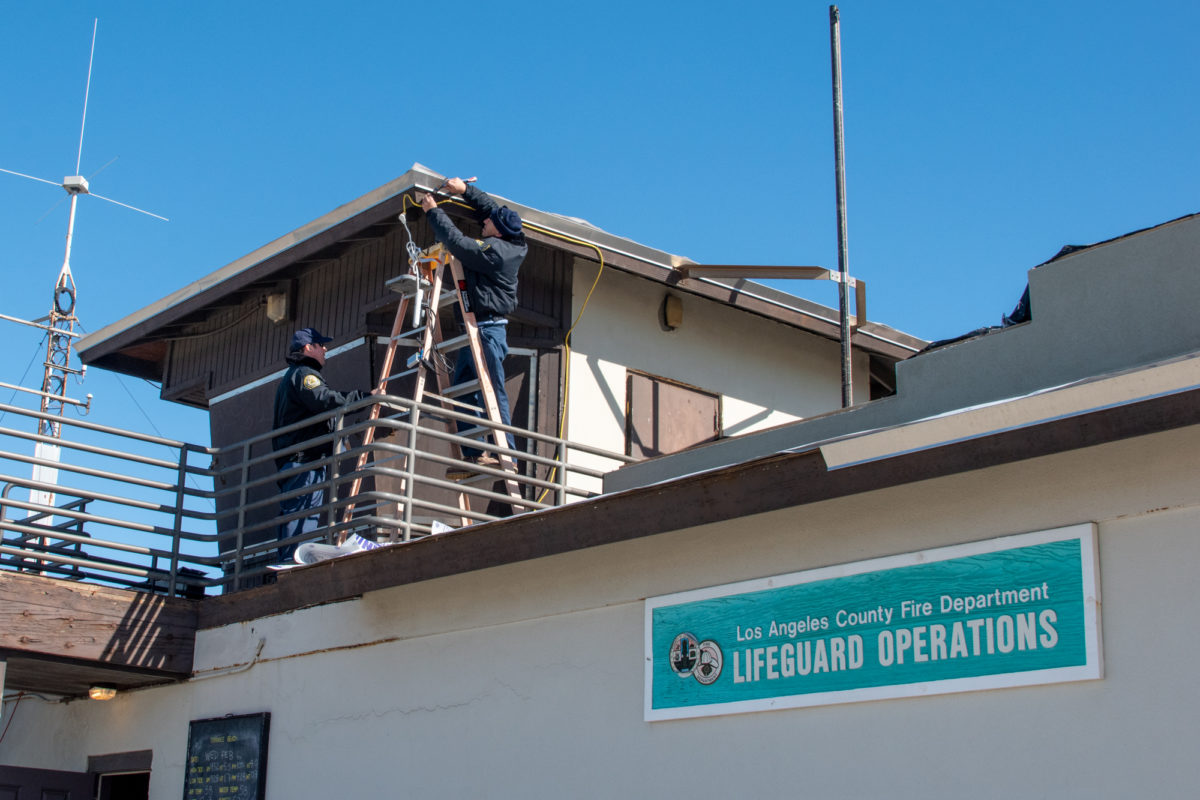 An emergency evacuation system designed for hard-of-hearing beachgoers has gotten the green light from the Los Angeles County Board of Supervisors, likely setting a Torrance Beach pilot program to be ready in time for the return of warm weather.

On Tuesday, the Supervisors approved a pilot program for the Beach Emergency Evacuation Light System, or BEELS, at Torrance Beach. The project is budgeted for no more than $300,000, and is likely to be ready by late March.

“We see over 50 million visitors annually to our beaches, and we want to make sure our beaches are safe and enjoyable and accessible to everyone,” said Fourth District Supervisor Janice Hahn. But when emergency strikes — tsunami, shark sighting, lighting strikes or toxic pollutant alerts, Hahn offered as examples — county beaches currently only offer audible warnings.

Enter BEELS. The system was created by L.A. County Department of Beaches and Harbors Safety Officer Randy Dean, as he examined why deaf and hard-of-hearing community members aren’t regular visitors to the beaches. His first guess, he said, was that they may feel less able to respond to emergencies than hearing beachgoers.

The light went off in Dean’s head thanks to his children — Dean is father to two hard-of-hearing adults. His son reminded him of technology used in hard-of-hearing homes: flashing lights, which are used as a doorbell alert in place of an audible chime.

Dean took that idea and scaled it up with high-intensity L.E.D. strobe lights, designed to catch the eye of beachgoers in the water and on the sand. Those lights will be installed on county Lifeguard structures at Torrance Beach, and will be accompanied by a speaker system that will offer instructions to beachgoers in both English and Spanish. Signs accompanying the system will also be installed to clarify any signals’ meaning, in an attempt to cover as many bases as possible. The speed of the flashing lights, DBH spokesperson Nicole Mooradian said, will tell beachgoers if the alert signals a water-only evacuation, or a full-beach evacuation.

“All along, we have been focusing on accessibility of the deaf and hard of hearing community, but it has been within four walls,” Renee Thomas, of the Los Angeles Agency on Deafness, told the Supervisors. “BEELS is one of those things that’s so important…it’s so nice to see that there has already been a community response, and that it’s shock and awe — we are so grateful that you are supportive of this project.”

BEELS has been tested multiple times over the past months, including individual light and siren tests. But the OK granted by the Board of Supervisors — jointly championed by Supervisors Hahn and Sheila Kuhl — will finally allow DBH to install and test the complete system before its March rollout.

“There’s a backend planned, where lifeguards will be able to trigger it for specific beaches or, if it’s something that’s for the entire coast, a tsunami warning that can be triggered at the Office of Emergency Management,” said Mooradian.

Redondo Beach is very likely next for the system; a DBH presentation before the Redondo Beach City Council is scheduled for January. Redondo Councilwoman Laura Emdee, a member of the county Beach Commission, spoke in favor of the project before the supervisors on Tuesday, and said the project may have value far beyond the beaches, as supervisors suggested.

“Imagine the logistics — being able to tell everyone, including people who are deaf, so much faster,” Emdee said. “It’s one of those things you hope you never use, and it’s a proactive, innovative system…it’s all about efficiency when there’s an emergency.”

DBH officials said that, should the project pass muster, it is likely to begin expansion to other beaches by summer 2020. ER