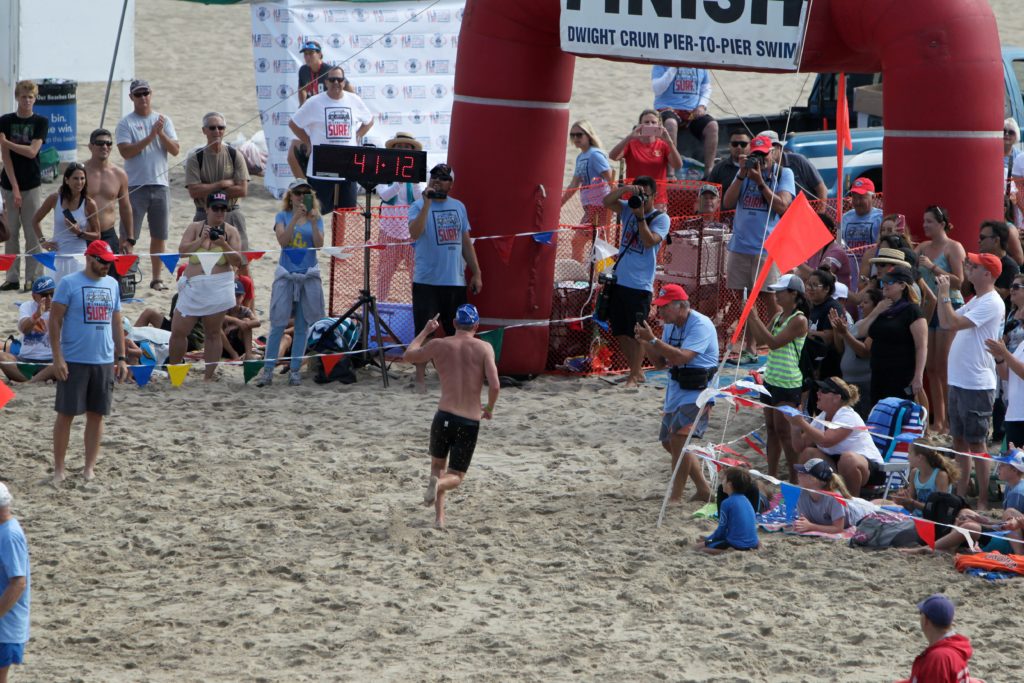 In another showdown between rivals Ryan Bullock and Kevin Fink, Bullock won his second straight title of the Dwight Crum Pier-to-Pier Swim, with time to spare.

Bullock, of Torrance, improved his 2016 winning time by two seconds, crossing the finish line at 41 minutes, 16 seconds beating fellow lifeguard Kevin Fink, of San Pedro, who finished at 43:17. Alex Kostich, of Los Angeles, was third at 45:00.

“I always know Kevin will be the guy to beat,” said the 33-year-old Bullock. “He’s only 21 so the age factor comes into play. Except for the strong current moving south in the second half of the race, the conditions were great. The water was warm and clear and I could see schools of fish underneath me.”

Bullock’s family visited from Arkansas and joined his aunt who travelled from Australia to support him. Bulloack’s father, a native of New Zealand and former Olympic-caliber swimmer, escorted Ryan on a paddleboard throughout the race..

The win was the second of the weekend for Bullock and Fink. The two were swim teammates on LA County-Southern’s Taplin Medley winning team Saturday night.

“The water was beautiful and warm,” Cummings said. “The first half of the race was great. Then it became a little bumpier as we headed to the Manhattan Beach Pier. I just focused on the men in front of me and did my best not to get passed.”

It was also a busy weekend for Cummings. She competed in the Bud Stevenson Intracrew Relay Friday night, lifeguarded in Santa Monica on Saturday then returned to Hermosa Beach Saturday night for the Taplin Medley competition.

Cummings is a member of the LA County team that will compete at the United States Lifesaving Association (USLA) National Championships in the Daytona Beach, Florida this weekend. She has finished second in overall points in the women’s division the last two years.

Complete result are available at surffestival.org.