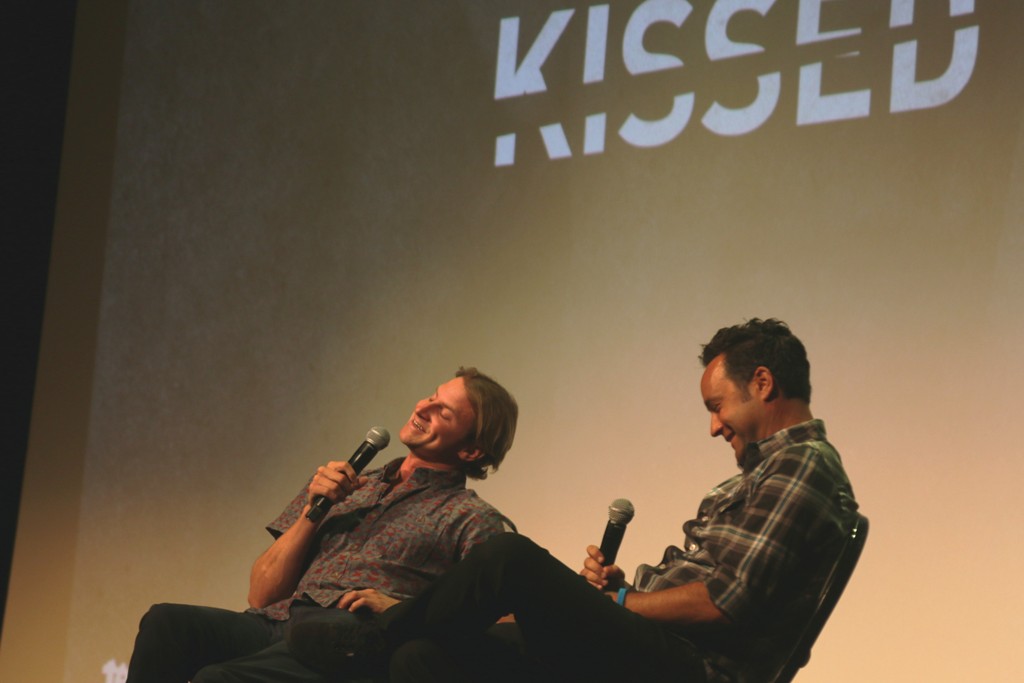 Alex Gray and Jeff Miller “let the sunshine in” during their talk about Andy Irons: Kissed by God.” Phtos

In August, 2004, Alex Gray was competing in the Quiksilver Pro in Hossegor, France, when his parents visited with news they wanted to tell him in person. Jimmy Miller had killed himself in his parents’ Manhattan Beach home. Miller had been Alex’s older brother Chris’ Junior Lifeguard instructor. He had taught Chris to surf and Chris had taught Alex to surf.

What Gray described as “an unfortunate, common bond” between the Gray and Miller families deepened. Six months earlier, Chris Gray had died of an overdose.

Irons was the ASP World Tour champion in 2002, 2003 and 2004. Enroute to his 2004 title, he won the Quiksilver Pro Gray was competing in when his parents told him of Jimmy Miller’s death.

Irons’ father Phil grew up in Torrance and moved to Hawaii to surf in 1970. “Kissed by God” recounts Andy Irons’ legendary rivalry with 11 time World Champion Kelly Slater. More significantly, the film explores Irons’ losing fight with bipolar disorder and drug addiction. He died in 2010 of a drug-related heart attack in a Dallas hotel, on his way home from a contest in Puerto Rico. He was 32. The film ends with scenes of Irons’ wife Lyndie and son Axel, born two months after Andy’s death.

“That ending was more powerful than I was prepared for,” Gray said as he struggled to speak from the stage, following the screening. “Something like that is hard to relate to until it happens to someone you know. I suspect many of you in the audience unfortunately know this,” he said.

Steve Carranza’s portrait of Andy Irons was raffled off at the “Kissed by God” screening in Hermosa Beach. Photo

The year after his brother’s death, Gray said, Red Bull invited him on a Fiji boat trip with Andy Irons and his wife Lyndie, his brother Bruce and Australian pro surfer Mick Fanning.

“I was only 18. I don’t know why I was invited. Andy was my hero. I grew up watching his videos. The surf was small, so we spent a lot of time on the boat. One evening after dinner Andy and his wife talked to me for two hours.”

When Irons died, Gray was living on the lower floor of the Volcom house on the North Shore, in Hawaii. Bruce Irons lived on the second floor.

“I wrote a five page letter to Bruce. I was going to hand it to him, but lost my nerve and slid it under his door. He never mentioned it. I thought maybe someone else had found it and didn’t think he should read it. Three years ago, Bruce and I were keynote speakers at the SIMA (Surf Industry Manufacturers Association) convention in Cabo. Afterwards, back at the hotel, he thanked me. I said, ‘For what?’ He said the letter. He said, ‘I read it a lot.’”

Gray said he almost gave up surfing after his brother’s death.

“I was angry. That can be help in surf contests. But anger is toxic. I lost friends. The turning point came during a contest when I asked myself, What would Chris want? And the answer was, Go out there and win this thing. Live the life.”

Neither Gray, Miller nor Bruce Irons romanticized the losses of their brothers.

“My brother was a monster during his last six months,” Gray said. “We all make mistakes. The consequences are just worse for some than for others.”

Gray resisted therapy until last April, when he posted a “sibling loss surf therapy day” on Instagram. The post led to the creation of the AGray Surf Therapy program

Gray and Miller ended their discussion by thanking the Irons family for their honesty in the film. The audience expressed similar appreciation to Gray and Miller with shouts of “We love you.”

The “Kissed by God” screening was sponsored by the South Bay Boardriders Club and the Jimmy Miller Foundation.