Patrick Sweeney, center, and 15-year-old Alex Mendoza, right, get off to equal starts in the Hermosa 24 ultramarathon. The two distance runners were the top two finishers in the 24-hour soft-sand endurance run. Photo by Randy Angel

Distance runner Patrick Sweeney will be the first to tell you he enjoys a sip of good bourbon. But for most of last weekend, the Manhattan Beach native had Guinness on his mind.

With almost a half hour to spare, the 32-year-old Mira Costa alumnus accomplished his goal of becoming the Guinness World Records© holder for Greatest Distance Run On Sand in 24 Hours. His 87.36 miles broke the record of 83.04 miles set last Labor Day weekend by his friend Christian Burke, who had shattered the previous record of 62.14 miles while using the attempt as a fundraiser for Hermosa Beach schools. 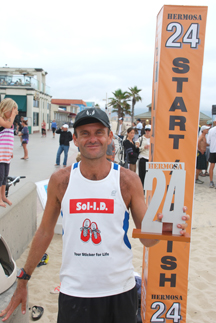 Patrick Sweeney, of Manhattan Beach, has enough strength left to hold the perpetual trophy given to the winner of the Hermosa 24 ultramarathon. The 32-year-old Mira Costa graduate broke race director’s Christian Burke’s world record running 87.36 miles in the soft sand during a 24-hour period. Photo by Randy Angel

The ultramarathon was so successful that Burke decided to make it an annual event. As race director, Burke had his hands full and did not compete last weekend but plans to go head-to-head with Sweeney next year in what should prove to be an exciting competition.

“I’m thrilled for Pat,” Burke said after Sweeney crossed the finish line. “If anyone could break the record, it was him. It was my hope that he would beat me but not by much. Next year will be a Battle Royale and I hope we have nine or ten guys going after the record.”

Although he is sponsored by Stone Brewing Company in Escondido, it’s ironic that Sweeney still has the image of a satyr drinking a pint of Guinness that was tattooed on his leg many years ago. His website is bourbonfeet.com.

After a few photos were taken of Sweeney holding the perpetual trophy consisting of a large silver “24” that will have the name of each year’s winner added to it, the new record holder asked someone to take the award away.

“I’m so tired I can barely hold it.” Sweeney said as some rushed to bring him a folding chair to collapse in.

“It’s exciting to be in the Guinness Book of World Records,” Sweeney exclaimed. “It’s something I wanted but really didn’t know if it would happen. I knew I could do it but a lot of things could go wrong. It didn’t become that difficult for me but, that being said, I feel like crap. I think next year, between me and Christian and if we both get adequate training and who knows who else will show up, 100 miles is a definite possibility.”

When the race began Saturday at noon, the sun was bright and the sand was hot. Many runners suffered from blisters on their feet and toes. Sweeney said the wind picked up in the after which made the race a little bit more difficult, but then a beautiful night and morning helped him through the endurance test.

“I was happy with the conditions,” Sweeney said. “It seemed that I had a terrible start on every other lap and the first half mile would be hit or miss for me. The hardest part of the race was being dog tired after three hours and knowing you have to keep doing it for 21 more hours. The mental aspect is more challenging than the physical part in a race like this. Once you get to a certain point, your body doesn’t want to keep going and you have to dig deep.” 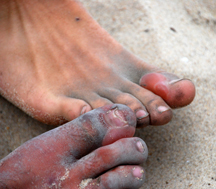 Patrick Sweeney sticks his foot out, bottom, to compare blisters with those of runner-up Alex Mendoza, 15, of Rolling Hills Estates. Photo by Randy Angel

Sweeney said his next challenge will come on the Fourth of July when he competes in the annual Ironman competition in Hermosa Beach where participants must run a mile, paddle a surfboard a mile in the ocean and then consume a 6-pack of beer. The first person to hold their beverage is deemed the winner.

“I’m pretty good at the running and drinking part but the paddling is the hardest leg for me,” Sweeney said.

Providing support for the duration of last weekend’s 24-hour event were Sweeney’s mother and sister. Diane Sweeney, who taught in the Manhattan Beach School District for 40 years, was proud of her son’s accomplishment.

“Patrick’s run 100-mile races before but the monotony of running in the sand is difficult,” Diane said. “It’s harder to time yourself and find what your pace should be.”

Sweeney’s sister Kirsten Pollicino, of Redondo Beach, is herself a runner and kept track of Patrick’s pace.

“There was one lap right in the middle where Patrick had trouble but after that he got his groove back,” Pollicino said. “Next year should be really exciting with more runners battling it out. We took a picture of him every time he came in from a lap.”

A video of the beginning and finish of each lap was provided to Guinness officials for verification of the record. A lap is disqualified if a runner leaves the sand without checking out at the scorer’s table.

“The toughest part of the race was the 11th lap. I got dead tired,” said the distance runner who competes on the Peninsula High School track and cross country teams. “I’ve never run a marathon before so each mile became a farther distance for me and I just kept pushing myself to do another lap.”

Sweeney told the teenager how impressed he was of the youngster’s accomplishment while the two put their feet side-by-side comparing blisters on their big toes.

“I kept watching that kid Alex throughout the night and I said to myself ‘this kid might catch me. He’s got a chance,’ “Sweeney said. “I didn’t know his actual mileage because he took a few breaks but he did an exceptional job.”

“I checked out with officials and took a nap at a local hotel in between,” Hernandez admitted. “I did run a couple of laps during the night which was actually my favorite part of the race. I run ultramarathons and this looked like a different challenge being that it was 24 hours and in sand. It was the toughest event I’ve ever been in. Running in the sand is extremely tough on the body. I have blood blisters on my toes and ache all over.”

Hernandez held off Julie McMahon, of Manhattan Beach, who finished within nine minutes of the winner.

Through the solo and relay categories, The Hermosa 24 created opportunities to those individuals or teams to raise funds for any school or cause that a team wishes to represent. A pledge drive system was been created to allow relay groups to gather donations for miles or laps completed, or a one-time donation that upon completion of the event will be directed at their school or cause. All entry fees go to schools in Hermosa Beach.

Michael Monaghan, of Redondo Beach, was awarded $100 for running the fastest lap (pier-to-pier) and Terrance Honane, of Torrance, earned $75 for having the fastest time for one mile.

Burke was unsure of the exact amount raised for the school system but said it would be in the thousands. His daughter, Halle is a 6th grade student at Hermosa Valley School.

“Christian put on such a great event and to be held on Father’s Day and give back to the schools and his daughter makes it very special for me,” Sweeney said.

“At this point in time, anything anybody’s willing to do to benefit the schools is huge on its own,” Hermosa Beach Councilman Michael DiVirgilio said. “I think what’s been really special about Christian’s effort is that he’s brought his best talent to bear and on his own, with his core of supporters, has built this really terrific program that attracts an optimistic outlook about schools, that there is more than can be done, it’s easy to do things and it’s not always a bake sale and it’s not always bad news.

“This can be a community event and can get bigger. I think he really set a high bar when he set the world record last year and bringing that into the mix makes it something to be inspired about. What I like about it is that when somebody wants to do something, especially for the greater of good, the city and community is open arms to it and there’s lots of room for people to make a difference.”

Burke is optimistic that the event will continue to grow for many years to come.

“We had a sunny start and the wind picked up to help cool the runners down a bit and when the sun set we had an epic evening. It was just really exciting,” Burke said. “I spent a lot of money making this event go down this time but it’s a reusable thing that we can bring back next year. We wanted to have a top-quality event whether it was for two people or two thousand people and we did just that. This is a building year and next year will be even bigger.”