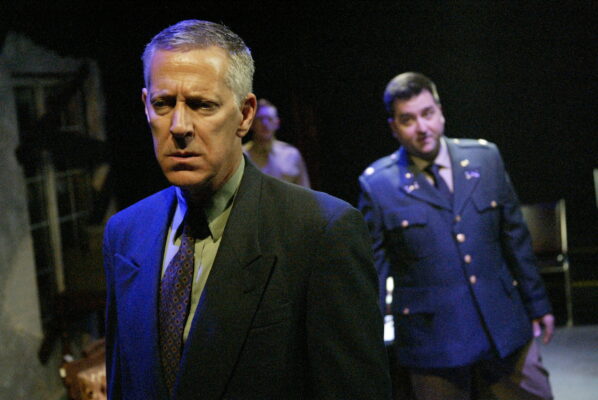 Patrick Vest may want to consider hiring a bodyguard. The actor who plays Major Steve Arnold in Ronald Harwood’s “Taking Sides” (onstage at Little Fish through April 4) is near perfect as a detestable son-of-a-bitch – an aspersion seemingly seconded by a woman in the audience who declared at intermission that she was ready to jump up and punch him. Standing outside, a similar remark was heard from yet another member of the audience.

Vest should, however, take all this as a compliment, because he’s also instilling a great deal of forceful tension into a work already overflowing with grim consequences. Set in Berlin during the aftermath of World War II, the major’s assignment is to interview prominent Germans and to determine how complicit or compliant they were with the Nazi regime. Eventually these denazification sessions led to the Nuremberg tribunals at which many of Germany’s top brass were condemned to death or to long prison sentences.

Although he doesn’t appear until quite late in the play, “Taking Sides” revolves around Wilhelm Furtwängler, the celebrated conductor of the Berlin Philharmonic, who was then, as he is now, considered one of the best in his profession. While never a member of the Nazi party, the recurring question is: Why didn’t he leave the country? And one may also wonder: Didn’t his presence and stature lend a certain legitimacy to the regime? The same questions could have been, and were, asked of composer Richard Strauss.

The entire play is set within the major’s office. His German secretary, Emmi Straube (Tara Donovan), is a cultured young woman, the daughter of an officer who was in on the plot to assassinate Hitler, and who was executed after the plot went awry. It’s also clear from the start that she reveres the famed conductor.

So does Lieutenant David Wills (Cylan Brown), a liaison officer (from a cultural affairs committee) who is sent over to witness or to partake in the proceedings. It’s not a terribly active role except that it enables Brown to react in countless ways to what he sees and hears – and he’s quite adept at this kind of silent commentary, most of it edging towards disbelief or anger at how the major is handling his interrogations. Despite being Jewish and having lost both parents who were unable to escape Germany, reasons enough for bitterness, Wills – like Emmi Straube – still remains in awe of Wilhelm Furtwängler. 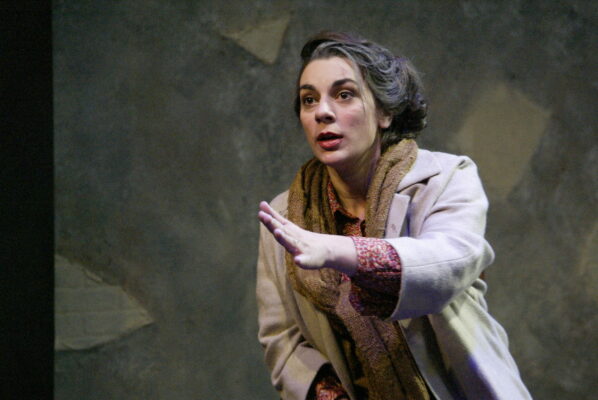 As does Tamara Sachs (Kristina Teves), the widow of a musician on whose behalf the conductor once interceded. The point is repeatedly made that Furtwängler helped many Jews leave the country, and he was certainly protective in a fatherly way of the Jews in his orchestra. Sachs is now in turn interceding for the conductor, and Teves is very good at conveying emotions that have her almost on the verge of a breakdown.

None of which seems to faze the major. In his view, Furtwängler is merely a “bandleader,” and it’s hard to know if this is a deliberate, belittling tactic – to show no deference whatsoever to an acknowledged artist – or the result of genuine ignorance and insensitivity (the ugly American syndrome). He reminds us on occasion that he was an insurance claims assessor, with little exposure to culture, and this even seems to be why he was picked for the job (and why Wills would not have been).

Perhaps this also explains why, in part, he is so very harsh on the conductor, as if “nailing” someone considered an extraordinary human being will somehow elevate his own stature. In fact, he seems on a mission, a crusade even, to prove that Furtwängler was guilty of a crime or of criminal activity.

Before eventually interviewing the conductor himself, Major Arnold summons Helmuth Rode, the Philharmonic’s second violinist. James Rice makes us forget that we’re seeing an actor and not a broken, tired old man (perhaps another reason why audience members want to take Vest aside and rough him up a little). Rode, who was accepted into the orchestra only after its Jewish players had been banished, eventually proves somewhat deceitful and corruptible, perhaps merely to ensure his own survival, although his praise of Furtwängler as an artist and a genius appears to be sincere. 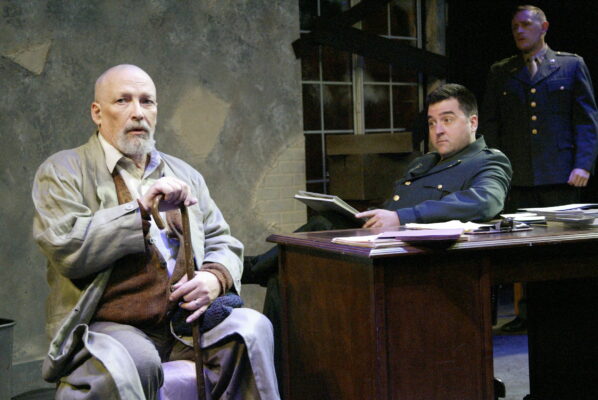 In a way, beginning with Tamara Sachs and now with Helmuth Rode, and soon with Richard Perloff as Wilhelm Furtwängler, we have a sequence of virtual monologues, each of which enables the actor to rise to the occasion. Fortunately, director Stephanie Coltrin has assembled a stellar cast, and in particular for the more crucial figures as performed by Rice, Vest, and Perloff.

The assumption, going in, might be that of Bad German vs. Good American, and in fact the one touchstone that buoys the major, and to which he returns, is that of the extermination camps. For him, that’s the bottom line, and so (the reasoning goes) anyone who knew about the evils being perpetrated by the Nazis and yet didn’t leave or protest is somehow guilty by association. In a way, it’s a variant of playing the Holocaust card or the race card whenever nuanced discussion hits a snag.

As Gioconda Belli has written, “In times of war nobody lives in remote regions,” and this might seem to buttress the major’s argument. On the other hand, to cite Graham Greene, “The nearer you are to war, the less you know what is happening.” Together, this seems to leave matters in a bit of a stalemate.

Perloff carries himself elegantly and has a perfect accent. His character seems perplexed by the major’s inquiries and also somewhat appalled by his ignorance. Meanwhile, the major tries to show (not always successfully) that he won’t be cowed by the conductor simply because of the latter’s reputation.

The dynamics of this interface is one of the more compelling aspects of Harwood’s play (which includes actual recordings made by Furtwängler and the Berlin Philharmonic, as well as actual filmed footage of him conducting when Hitler was present), and it is without doubt intellectually and emotionally demanding of its audience. Although these kinds of courtroom dramas, so to speak, are not rare – be it the more popular ones like “Twelve Angry Men” or the strikingly memorable “2: Göring in Nuremberg,” by Romulus Linney – they are seldom presented by community theaters which would rather go with Ray Cooney or Neil Simon and so not risk offending – or challenging – anyone. Little Fish seems to tackle everything – the only criteria being that it’s dramatically well written. 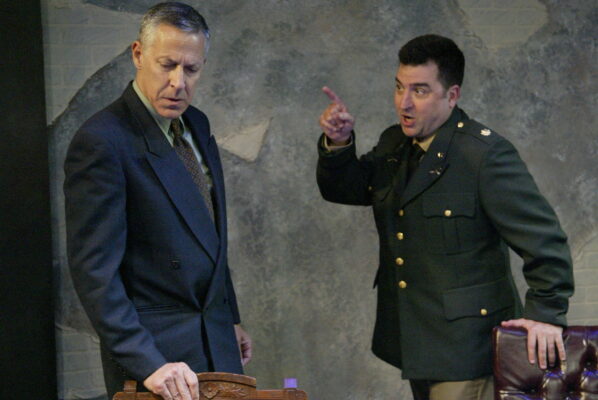 By all, certainly most, accounts, Wilhelm Furtwängler did the best he could to remain above the fray of the political, while at the same time trying to uphold and remind the German people of their musical heritage. Was he able to keep his life as a man separate from his life as an artist? No, not entirely, and yes there were compromises. Did these compromises contradict or invalidate what he said he stood for or was trying to accomplish? In the larger scheme of things it doesn’t appear so.

As to whether or not staying in Germany implied acquiescing to its politics (and how many of us left America when Bush cooked up reasons to invade Baghdad?), Albert Speer – Hitler’s architect and armaments minister – when asked why people like Furtwängler didn’t leave, replied that it would not “under any circumstances” have been allowed: “nothing so damaging to Germany’s reputation abroad could have been permitted.” When Furtwängler roiled the waters there were threats, and we know that the people making them were all too ready to carry them out.

This wanders a bit from the play itself, although my intention has been to underscore that Little Fish and the fine actors appearing in “Taking Sides” have given us an engaging and thought-provoking work, one which ranks among the best I’ve seen in recent years. There are really no other words except these: Don’t let this production get away without seeing it.