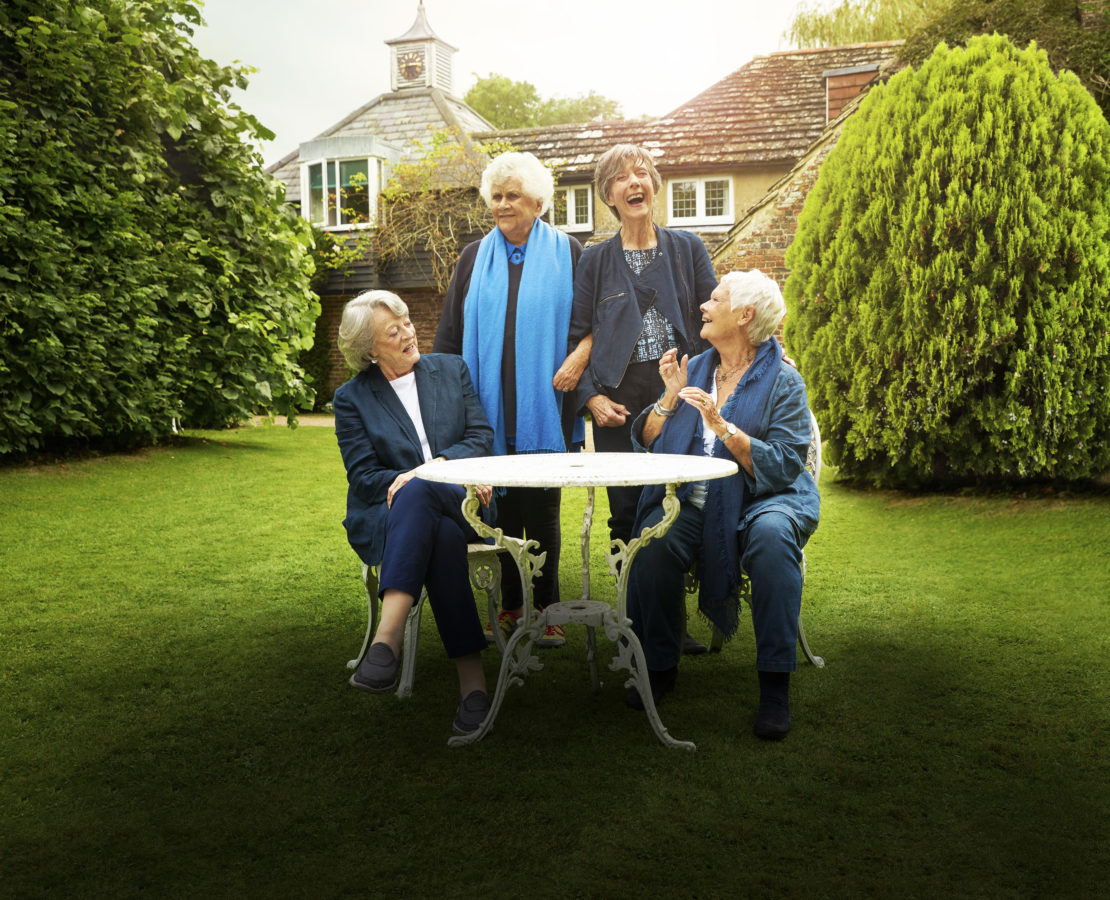 “Tea with the Dames” is one of the most delightful documentaries to come along in a period that has been full of wonderful documentaries. Although the term “Dame” refers to the royal honorific bestowed on women who have made outstanding contributions to their craft, it can, surprisingly also take on the American vernacular term that implies down and dirty, salt of the earth, woman, not necessarily a lady, as in “There is nothing like a…” The dames in question? Judy Dench, Eileen Atkins, Joan Plowright, and Maggie Smith.

These four, long-time friends from the English stage, all of whom began their careers at approximately the same time, meet periodically in the countryside to raise a cuppa, catch up, and gossip a bit. Two are better known to American audiences than the others, but all are more than deserving of the title. Joan Plowright, perhaps the least-well known to a young audience, was already a successful theater actress when she was cast in the West End production of “The Entertainer,” playing Lawrence Olivier’s granddaughter. Shortly thereafter, she became his third wife, at which point her theater work was, for the most part, performed at the National Theater where Olivier was the artistic director. She has a lengthy list of film and television credits and, like the others, is a Tony and Olivier Award winner for her stage work on both sides of the Atlantic.

Eileen Atkins is better-known to British audiences for her many film and television roles, most notably in “The Crown” as Queen Mary and the “Doc Martin” series. But her life in the theater is extensive and laudatory, having been nominated and awarded numerous times for the Tony, Emmy, SAG, and Olivier. She was also the co-writer/co-creator of the popular television show of the early 70’s, “Upstairs, Downstairs.” Atkins, unlike the others, was from a decidedly working class background and had her cockney accent drilled out of her in her youth by teachers who recognized her potential beyond her surroundings.

Judy Dench is unmistakable with her snow-white pixie cut, sparkling eyes, and bon mots, dropped at every occasion possible. Tongue in cheek, she mentioned that one of the reasons she took on the role of “M” was that husband Michael Williams rather fancied being with a Bond girl. All the women are very clear in their desire to continue working if only, on occasion, Dench will relinquish a role. “We’re going to work forever,” said Dame Judy. “But you’re always asked first,” replied Maggie Smith. Like the others, her career on stage started when she was very young. Clips are shown from her West End performance in “The Cherry Orchard” with John Gielgud and Peggy Ashcroft, two of the giants of the stage. A clip from her star-turn as Sally Bowles in the original London production of “Cabaret” reveals her surprising voice and sex-kitten allure. She, like the others, interspersed her theater work with television and film.

And last, and certainly not least, is the actress everyone is most acquainted with – Maggie Smith. With her “Who me?” look and razor-sharp wit, she is unmistakable. Though most know her at this point for her roles in the “Harry Potter” series and “Downton Abbey,” she is a devoted theater actress with a long list of roles and awards in film, television, and the stage.

But all are “Dames” and all are friends and they all love to dish.

Filmed in the countryside over several days, director Roger Michell brought a full film crew into the country home of Plowright. And therein lies the rub. One would think that a director as experienced as Michell (“Notting Hill,” “My Cousin Rachel”) would have been more adept at placing the women at ease. Too often the clunky crew seems to trip over their own equipment and Michell has to cue the actresses – not too spontaneous, that.

The women are wonderful and on the few occasions where they seem oblivious to the camera, they laugh and talk candidly about their past lives in the theater and the reactions they often got. Both Dench and Atkins reminisced how directors found them, if not entirely unattractive, unusual looking but certainly not beautiful. Atkins alludes to her and Dench’s bad girl years in the 60’s. Their self-deprecation is genuine and their close friendship obvious.

As one would expect, it is Smith with the best lines. When asked by the director (off screen, but somehow always present) what it was like to act with their husbands, Smith quickly quipped, “Which ones?” Implying that acting on “Downton Abbey” was fairly tedious, she was asked if she had seen the show, or at least her episodes. They gave her the complete boxed set, she noted, but she decreed that she would never live long enough to get through it.

The joy for any theater fan is to see the many clips of their early, early stage performances. This is sometimes countered by the dismay of the director being unable to put the women at ease and cuing questions off screen that should have been edited out of the final print. He could easily have cut the pieces together so that his presence was invisible. One begins to think that he wanted to be part of the conversation. But then, again, who wouldn’t want to if it involved these women.