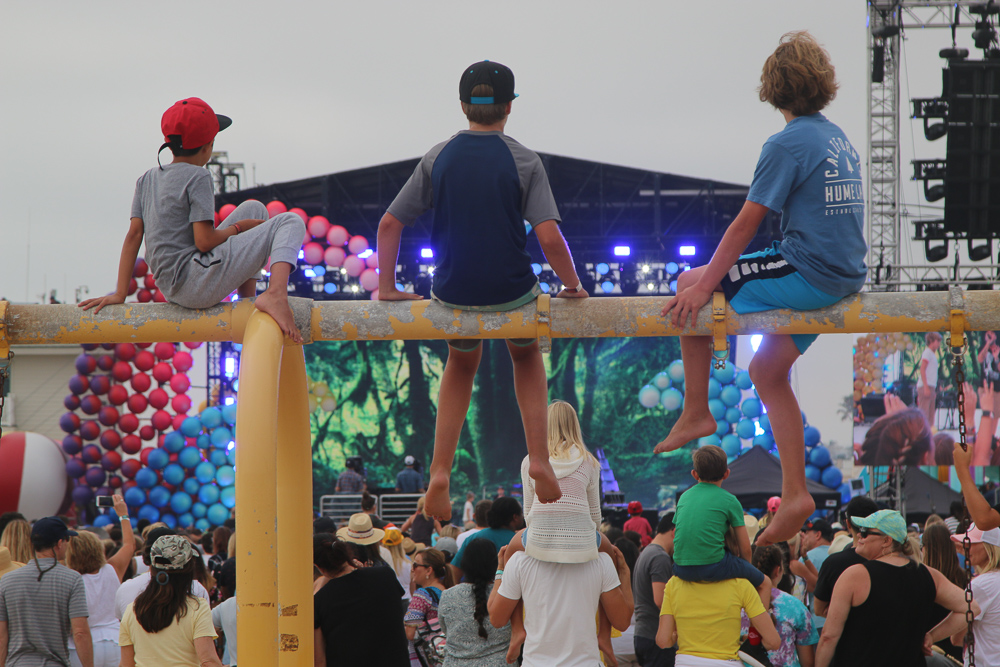 La Playita is usually jammed on summer Sundays. But this past Sunday, breakfast and lunch was down 50 percent. Harold Cohen blamed the dropoff at his downtown Hermosa Beach restaurant on the downtown street closures.

The streets were closed to accommodate the Teen Choice Awards, which were to be broadcast Sunday evening, live nationally on Fox Cable from a stage on the beach south of the Hermosa pier. Teen Choice production trailers had taken over two of the three downtown parking lots. Over two dozen black suburban limos lined Hermosa Avenue, where downtown business customers would normally park.

A corral designed to contain 10,000 fans was erected on the beach in front of a towering stage. On Thursday, 3,000 free tickets set aside for local residents were quickly snapped up by a line that had begun forming shortly after midnight. Another 7,000 free tickets had been distributed on line. No one knew how many thousands more might come to Hermosa in hopes of seeing the show’s honorees, who included Avengers: End Game star Robert Downey Jr., Disney Channel pop stars The Jonas Brothers and super star Taylor Swift. The outspoken musician was to accept the Teen Choice Icon Award from Alex Morgan, a star on the U.S. National World Cup championship team. Swift has expressed support for the soccer team’s advocacy for gender equality in pay.

Hermosa police posted observers on rooftops and brought in bomb sniffing K9s from Inglewood Police, and SWAT teams from Hawthorne and Redondo Beach.

Because business was slow, after lunch, Cohen and his daughter Danielle, who also works at the restaurant, walked down to the event’s 10th street entrance. There, on an impulse, Cohen asked an official if there were any tickets available. Scalpers had been asking as much as $500 for the free tickets.

“She told me, ‘Sure. How many do you want? I said two and she gave me two,” Cohen said.

“The show was great. Taylor Swift killed it with her talk. But it did cost me a few thousand dollars in lost business,” he said.

Other downtown business owners had similarly ambivalent feelings about the show.

“A day in August is like a month in winter,” Hermosa Cyclery co-owner Steve Collins. He said he wouldn’t know until Monday morning how much business Teen Choice had cost him, but he knew it was significant.

His store is on Beach Drive, between La Playita and Pier Plaza, which was largely shut down for Teen Choice’s tented red carpet party.

“Initially, the city told me I would have to close. Then they said I could stay open, but could only open my side door. On the positive side, Hermosa Avenue looks like CicLAvia, with all the bicyclists and no car traffic. The South Bay Bike Coalition tried for years to bring a CicLAvia here, but we gave up because it was going to be too costly to shut down the streets,” he said.

To accommodate Sunday’s bicyclists, Collins set up a bike corral at the corner of Pier and Hermosa Avenues. By the 5 p.m. showtime, it was filled with over 500 bikes.

Kevin Barry is a partner in The Deck bar on The Strand, across Beach Drive from Hermosa Cyclery. He said the city also initially told him he would have to close on Sunday because The Strand was to be closed. Not until Sunday morning, he said was he able to convince the city to open a strip of The Strand leading to the Deck’s front door. At lunch time his patio was empty of customers, despite the beautiful weather. Inside,  fewer than a dozen customers were eating.

Early Sunday afternoon, Hennessey’s Tavern owner Paul Hennessey looked from his Pier Plaza patio at the red carpet tent and thought what might have been. His patio was  not quite full and inside was half empty.

“Teen Choice approached me about hosting a party for 600 VIP guests. I said sure. But the city shot it down because they said they didn’t want to ‘intensify alcohol consumption.’ This from a city that approved a beer garden in the parking lot behind by business for the next two weekends’ beach concerts,” Hennessey said.

Comedy and Magic Club owner Mike Lacey contemplated closing Sunday evening because of concerns that his customers wouldn’t be able to get to his Hermosa Avenue club. But he couldn’t because by the time he learned of the street closures he had already sold out. His guest Sunday night was former Tonight Show host Jay Leno.

“I was worried Jay might not be able to get to the club. Finally, I called the Teen Choice promoter, who told me if necessary, they’d have their security escort him to the club. Which was nice. But I wish there had been more communications with the downtown businesses. Why, for example, rather than bring in craft services all week, didn’t they encourage their crews to eat at local restaurants,” Lacey said.

Even Dennis Jarvis expressed misgivings about having the Teen Choice Awards in Hermosa Beach. Jarvis is the one who suggested to Teen Choice producer Bob Bain, a Manhattan Beach friend, that the awards be presented on the beach, rather than at a traditional venue, as in previous years. Jarvis, the founder of Spyder Surf, makes the surfboards that serve as the show’s awards. But Jarvis also has a surf shop on Pier Plaza and business on Sunday was down significantly.

“They didn’t need to take up all the parking and shut down the streets,” he said.

Which may have been true.

The line to enter the Teen Choice Show began forming Sunday morning and ran for two blocks along Hermosa Avenue and halfway down Pier Plaza. Another 100 teenagers were lined up on the sidewalk in front of the Comedy and Magic Club. They were children of the show’s crew and their friends who had been selected for their camera appeal to fill the area directly in front of the stage.

But when the gates opened, the corral designed for 10,000 looked to be only about three-quarters full. The crowd on the beach behind the corral numbered in the hundreds, not the thousands many had feared. ER