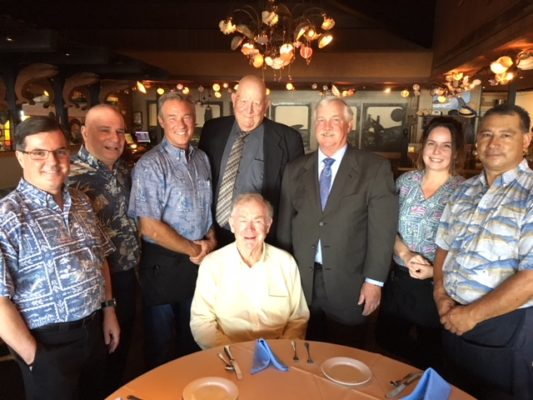 On Wednesday, Oct. 10, the Peninsula’s independently owned Admiral Risty Restaurant will mark its 52nd anniversary in the hospitality industry.  Fifty-two years is no small feat when restaurant statistics indicate that “up to 90 percent of independent restaurants close during the first year, and that those remaining will have a five-year life span.”  (The Restaurant Brokers Study, April 13, 2018)

What is The Admiral Risty’s recipe for success?  While The Risty’s spectacular ocean view, Five-Star Cuisine, Golden Bacchus Wine List and unique seafaring décor set it apart from all others, Owner, Wayne Judah, credits his crewmembers.   In particular, he cites the many long-term employees, whom he proudly calls the “heart” of The Risty.  We asked some of them to share historical insights and favorite memories.

The longest-term employee is Dan Heller with 41 years of service.  He began his career as a waiter, served as a bartender for many years, and today, he hosts five nights a week.  Heller shared that he witnessed the restaurant evolve from strictly a steak house to include fresh fish and “As You Like It” fish preparation on the menu. Back-in-the-day, when waiting tables, he remembers carrying ashtrays in his apron pocket to place on every table.

“My favorite memory is the night Marineland closed.  A bunch of ex-employees were in the bar and we witnessed history together as the orca van carrying Marine-land’s killer whale drove by in front of the windows.  Talk about whale watching!“    Server, Jimmy Faustino, has been a part of the wait staff for 33 years.  He has 500 regular guests who ask to sit in his section again and again.  Faustino talked about how detailed his job was.  He cited the need for good timing, knowledge of the recipes, drinks, wines, market prices, prices on nightly specials, and above all, to always be friendly no matter how busy he was.

Faustino fondly recalled his first night on the job when fellow server and Bay Boy, Slade Fester, said to him, ”Buff the whale scene and I’ll be stoked and you’ll be genius.”  He wondered if they had a new language at The Risty.  He soon found out that it was Bay Boy vernacular!  Fester wanted him to fill the wooden whale center-pieces on the tables with sugar packets.

Faustino shared that his worst night ever was the busy Friday night the  computer went out.  He had to write all of the orders by hand and do all of the computations and it was very challenging!  His best memory is of the 14 years he served lunches to the Bridge Club ladies.  “I had 52 friends whom I adored!”  In 2004, Faustino was named “Waiter of the Year” by the Southern California Restaurant Writers.

Bartender, Mike Fish, a 32-year employee, joined the crew when he was just 23 years old.  His favorite memory is of “all of the celebrities that wowed me!” Fish shared the names of NFL MLB and Pac-12 sports figures and coaches he had the pleasure of meeting and serving such as Yogi Berra, George Allen, John Arnett, Pete Carroll, Paul Westhead, Sparky Anderson, Billy Martin, Jerry Robinson, 1963 Indywinner, Parnelli Jones; comedian Roseanne Barr; actor Keanu Reeves; renowned singers and songwriters like Mickey Dolan, Boy George, Dave Mason, Marie Osmond;  world-famous astronaut, Buzz Aldrin, even Vice President Richard Nixon. “And, of course, I value the many friendships I’ve made with all of the regulars over the years,” added Fish.

Kevin Nichols, a 31-year server quipped, “They just can’t get rid of me!  It was and is a great place to be.”  He pointed out the fact that there are so many crew members that have worked at The Risty for over 20 years spoke volumes.   Nichols complimented Wayne’s consistent management style adding “He’s got our backs and we’ve got his.” Nichols remembers the Golden Cove of years ago and the old Safeway store, now the Montessori School; the Bank of America that became a Chinese restaurant and is now Trader Joe’s.  And, the formerly open space across the street that now show cases a large housing development.

He also recalls great parties in the tented Captain’s Quarters banquet facility, photos of the entire crew being quickly taken outside on a Sunday between brunch and  inner services, and the introduction of the computer system. Finally, he shared a special thrill one night when he and fellow server, Clark McTaggart, were allowed to drive a customer’s Porsche!

Server, Martin Alarcon, has been a part of the crew for 30 years.  For Martin, Working at The Risty has been a family affair for three generations.  The saga began with his father, then Martin, his uncle, brother-in-law, sister-in-law, nephew, wife and son.  Three family members are currently part of the team. “I’ll never forget former server John “Rocky” Hudson, the self-proclaimed ‘Coffee Guy.’  When Rocky was on the job none of us were ever allowed to make coffee because he loved doing it. He was very territorial!”

Line Cook, Jose “Chewy” Rodriguez is a 29-year kitchen crewmember.  He began his career as a dishwasher, worked his way up to soup prep, the broiler, meat cutter. He fondly recalls interactions with Ralph Wood, and especially Risty Wood, a Spanish language major at Mills College, who spoke Spanish with him.  During his tenure, the kitchen has expanded to include a specialty salad, cold appetizer and dessert prep area.

Lead Baker, Samuel Garcia, is a 22-year member of the kitchen crew.  He is second in command behind Rudie Young, an 11-year veteran. He also began as dishwasher and worked his way up to bread and dessert preparation.  Each day he bakes a different specialty roll, sour dough and six-grain breads, and he prepares all eight of The Risty’s popular desserts. Garcia also orders baking staples and trains employees.

Mother’s Day, the busiest day of the year, is always his biggest challenge, as he must prepare huge quantities of breads and desserts.  Garcia’s favorite memory dates back many years to New Year’s Eve parties when, at the stroke of midnight, waiters dressed in diapers like Baby New Year, would streak through the restaurant.  This fun tradition still continues each New Year’s Eve.  Garcia proudly shared that his son, Eric, has worked the specialty salad bar area for four years.

Bus boy, Gabriel Sosa, is a 20-year employee.  His brother filled out the job appli-cation for him.  Wayne interviewed him on a Wednesday and he started work on Friday.  He works in tandem with the servers clearing and setting tables, and making sure they have everything they need.  He loves the good food at The Risty, and he he calls having enjoyed celebrating family birthdays at the restaurant.

Server, Jill Gaston, a 19-year employee, says she loves the customers who are always nice and make her job easy.  She enjoys the families, watching the children grow up, and then returning with their children.  She’s witnessed a lot of romantic wedding proposals, too.  And, like the customers, she loves the spectacular ocean view and nightly sunsets.  Finally, Gaston fondly recalls working special events like Sunday-by–the-Sea with Risty, and how much she enjoyed Ralph’s nice sense of humor.

Manager/Host, Tim Roderick, is a 19-year crewmember.  Roderick fondly recalls his first night on the job and the fact that Wayne knew, by name, 150 of the 200 guests that night.  He shared that he took that as a personal challenge to learn guests’ names.  “Like Wayne says, we throw a party every night, and I just love interacting with guests and making sure they are having a good time.  It is such a pleasure to greet people again and again.”

Fifteen-year crewmember, Dave Jessup, says working at The Risty is “the best job I’ve ever had!  It’s like joining a fraternity, as employees become lifelong friends.  Jessup has done a little bit of everything- washing dishes, busing tables, line cook, waiting tables.  He left for a short while, and returned three years ago.  Jessup laughingly recalled the Sunday Brunch when the “waffle guy” didn’t show up, and Wayne rolled up his sleeves and pitched in.  He and his fellow servers pushed waffles that day so Wayne could “get in the trenches and feel the rush!”  His fondest memory dates back to the early 70s, and enjoying Beef Fondue dinners with his Dad at table 10.

Owner, Wayne Judah, has nearly a 40-year association with the restaurant.  He’s done it all—bartender, food and wine purchaser, handyman, plumber, electrician, accountant.  He was a co-owner and manager for many years until founder, Ralph Wood, passed away in 2015, at which time he and his wife, Jan, took over full ownership. “We have 48 full and part-time employees and we couldn’t be prouder of them,” said Judah.  While many things have changed over the years, the entire kitchen and wait staff remains committed to excellence in everything they do.  I am very fortu-nate to have such a wonderful crew who make every workday enjoyable.”  Five nights a week Judah is the consummate host- greeting customers in the entryway.

Live entertainment, featuring popular local entertainers, is offered six nights a week in the cozy Seaside Lounge.  An entertainment schedule is posted on the web site.  The Risty is open daily.  Dinner is served Monday thru Saturday from 5:00 p.m., Sunday from 4:00 p.m., Sunday Brunch is served 10:00 a.m. to 3:00 p.m.  For reservations/information, call (310) 377-0050 or online at www.admiralristy.com.