“The Art of the Crime” – Lessons to be learned [TELEVISION REVIEW] 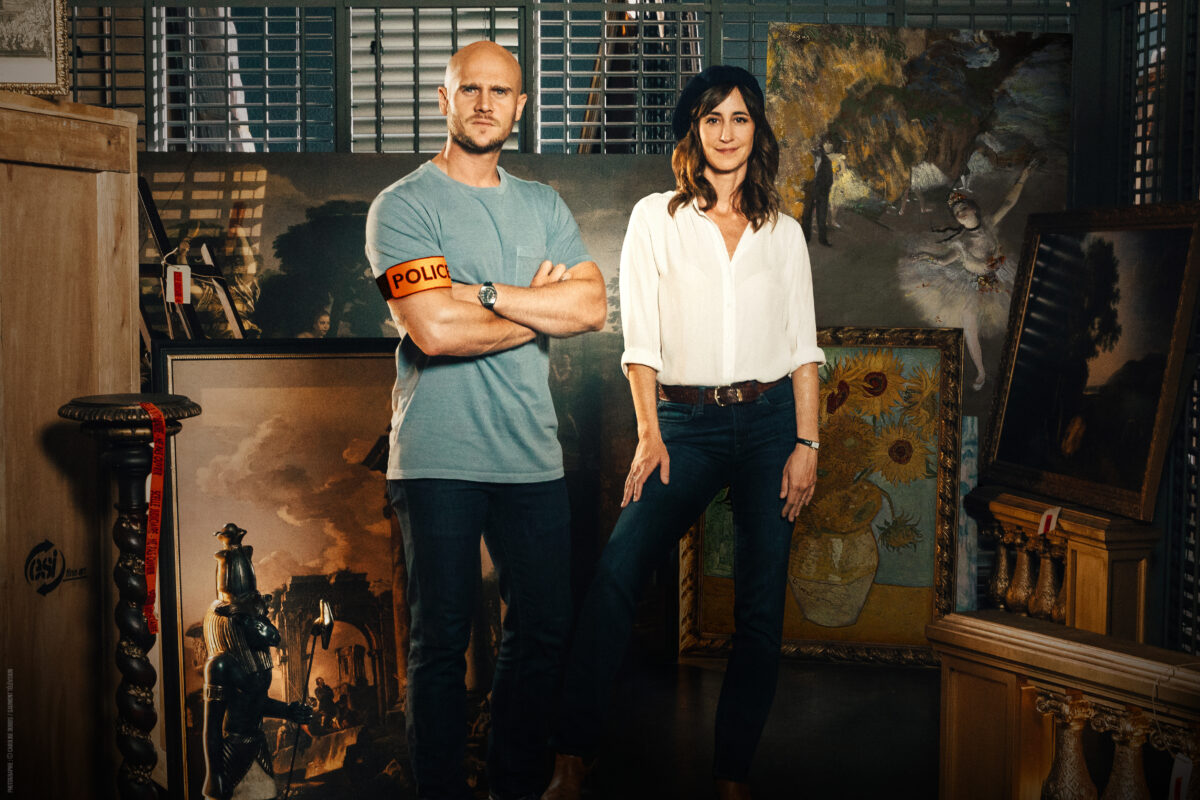 Nicolas Gob as Captain Verlay and Florence Chassagne as Eléonore Bernheim in "The Art of the Crime." Photo courtesy of MHz Choice.

Nicolas Gob as Captain Verlay and Florence Chassagne as Eléonore Bernheim in “The Art of the Crime.” Photo courtesy of MHz Choice.

Welcome to season three of “The Art of the Crime,” the French series created by Angèle Herry-Leclerc and Pierre-Yves Mora. Following the path of the previous two seasons, this engaging procedural gives us a new murder or murders in every two part episode along with an art history lesson. It is that art history lesson that sets it apart.

The fictional OCBC is a division of the French police that solves crimes that involve cultural patrimony; that is, paintings, museums, and/or artifacts of significance. If you’re thinking that this would be about theft or fraud, you’d be right and wrong because in this series a murder has usually been committed that sets the stakes higher. Florence Chassagne (Eléonore Bernheim), an art historian at the Louvre, has been teamed with crack detective and art ignoramus Captain Antoine Verlay (Nicolas Gob). Verlay, deemed art-phobic by Chassagne, has been resentful of her presence, not only because he’s a lone wolf with anger management issues, but also because she consistently and annoyingly finds art-based clues that pass him by completely.

Through the previous two seasons, an unacknowledged sexual chemistry has been building between the two that remains just out of reach. It’s one of those “will they or won’t they” issues that is tritely common in series where a man and a woman work together. Nevertheless, because of Chassagne’s ever expanding character growth and charm this old chestnut can more or less be forgiven.

The real draw into this series is the art backstories. Sure, there are the murders and their convoluted solutions, but when was the last time you had an art history lesson? Although a hokey premise, the psychologically quirky Chassagne talks to dead artists. These are her imaginary friends. In past episodes she has spoken to da Vinci when trying to make sense of the theft of an alleged Codex that spawned a murder; Monet, when one of his paintings holds the clue to a murder and a forgery ring; and Hieronymus Bosch when several seminarians perished who might have had a lead on the missing part of a famous triptych allegedly depicting the venality of priests. This season she will talk to Degas and Jean-François Champollion, the man who deciphered the Rosetta Stone hieroglyphics.

These most recent two two-part episodes will treat you to an inside tour of the Opera Garnier when a young ballet up-and-comer is murdered before his audition for the company, and the Egyptian wing of the Louvre when the deaths of several people are related to a curse invoked by the god Osiris thousands of years ago.

It is unfortunate that season three’s episodes are so convoluted. That is not to say that previous episodes weren’t complicated because they definitely were, but the art ties to this season are more tenuous.

Overall, “The Art of the Crime” is an engaging series. Murder mysteries are a dime a dozen, but this is the first time that I’ve actually learned things I didn’t know before. The crimes are often perfunctory but it’s the art that keeps me coming back for more.

And this leads into the actors. Nicolas Gob, Captain Verlay, is top billed. Recognizable from the previous French series “A Village in France” and “The Chalet,” he is charismatic and holds your attention. It is unfortunate that the writers have not seen fit to give him much development or depth. Gob does as much as he can but his character’s psychological block against art, related to a cultured father who abandoned the family when he was nine, has little credence and can be annoying in its repetition.

It is Eléonore Bernheim who positively shines as Florence Chassagne. Not a huge fan of the “imaginary friend” hook, she still makes it a believable part of her character. She grows in depth and beauty with each episode until finally she’s the empathetic center that the series needs. When she’s not on screen, the stories are flat.

The recurring supporting cast are good, especially Emmanuel Noblet as Hugo Prieur, Florence’s colleague at the Louvre and her ex. Benjamin Egner as Commandant Pardo, Verlay’s boss, is charming and adds just the right amount of authority.

Nevertheless, the real draw, other than the art, is Paris. How they got to shoot inside the Louvre (because if that’s not the actual Louvre then Hollywood needs to bang down the door of the production designers) must be a modern miracle. And the shots in the Garnier Opera House are stunning. The setting in the Loire valley’s Amboise Castle made me want to hop on a plane right away. The cinematography throughout the series is stunning. Each season seemed to use a different team.

There is nothing hard hitting about “The Art of the Crime;” it’s just an enjoyable puzzle for your viewing pleasure. Enjoy.