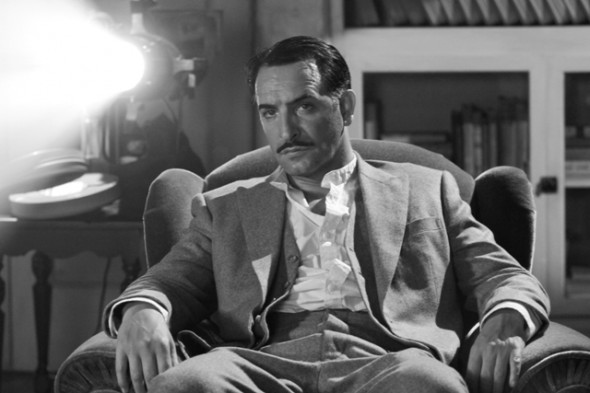 “The Artist” made me remember why I love movies and why I always hold hope that movies can exceed even the greatest expectations. This silent black and white film by director Michel Hazanavicius is an homage to the past with a glance at the future. The story of this film is driven and enhanced by the lovely and dramatic soundtrack by Ludovic Bource and the beautifully nuanced photography of Guillaume Schiffman.

George Valentin (Jean Dujardin) with his Gene Kelly- sparkling smile, will go from the apex to the nadir in a few short years with the advent of talkies. But when the story opens in 1927, he is seen taking bows on stage following the successful premiere of his latest film starring his beloved Jack Russell terrier and leading lady Constance (played by the sorely underused comedienne Missi Pyle). Constance is furious that he gives the dog higher billing, but then the dog is, after all, a better actor.

On a sunny day, walking the red carpet, a pretty young extra, Peppy Miller (Bérénice Bejo) accidentally bumps into George and is captured on camera. The next day, Variety’s headline screams “Who is that girl?” Peppy knows a good thing when she sees it and parlays her 15 minutes of fame into increasingly larger bit roles on film. The camera adores her, and with her Mary Pickford innocence and Mabel Normand comedic timing, who wouldn’t?

The story is an old one, told countless times if only in the various incarnations of “A Star is Born.” George, a huge star, is on his way down, not because of drugs, alcohol or excess, but merely because his time is rapidly drawing to a close. As talkies arrive he will lose his studio, represented by a glowering John Goodman, his wife, played by a very sour and dour Penelope Ann Miller, his home and all else but his dog and his faithful chauffeur, played by the marvelous James Cromwell, who expresses more by doing little or nothing than most actors can do with tears and shouting. Peppy, on the other hand, is a young actress whose career will rise rapidly with the advent of sound and eclipse that of the man she secretly loves, George.

Hazanavicius has created a complete allegorical world full of ups and downs, villains and heroes, light and darkness; and he has done it making an old art form, that of the silent movie, new again. It is so easy to forget how dramatic and engaging cinema was before sound. Story was certainly on the page, but mostly it was in the expressions of the actors and the imagination of the audience. As celebrity crazy as we have become, this film is a reminder of a time when Hollywood stars were the life and breath of everyone who went into a theater. The Peppy and George story had many real life equivalents, but one that comes first to mind is that of screen and real life lovers Greta Garbo and John Gilbert. Although successful in the silents, she reached her greatest fame with the advent of talkies despite her Swedish accent. He was one of the greatest stars of the silent era who was done in by arrogance, an inability to adapt his exaggerated acting style and a thin voice.

The Hollywood adoringly created by Hazanavicius is highly referential both to film and actors, both real and fictional. Foremost among his references has to be “Singing in the Rain,” a film that covered similar territory with the fall of one major star and the rise of another, personified by Gene Kelly. Dujardin has that same dazzling smile, insouciance and warmth. Even a clip from a George Valentin “Three Musketeers” feature mirrors a similar clip in “Singing in the Rain” that stole from an actual Kelly production of “The Three Musketeers.” But the Valentin Musketeer is also a clear reference to the zenith of Douglas Fairbank’s swashbuckling career that would crash soon after like that of George. Peppy is the quintessential plucky heroine with enormous ambition, much like Joan Crawford in every flapper movie she made during the 1920s before she hit the heights in the talkies. There’s even a sly nod to Rin Tin Tin when the dog runs to a policeman to save George from certain death.

Hazanavicius clearly loves film, its history and its players. Slyly, he has also underscored the ability of cinema in those days to be truly international because without sound you would never be aware that Dujardin and Bejo are French with little or no ability to speak English. Bejo, Hazanavicius’ wife in real life, perfectly captures the freshness necessary; her comedic talents were already a known commodity from “OSS: Cairo, Nest of Spies,” a spoof of the James Bond films directed by her husband and starring Dujardin. But it is Jean Dujardin, winner of the Cannes Film Festival best actor award for this film, who will be a true revelation to American audiences. His versatility is enormous, ranging from the above-mentioned “OSS” series to his dramatic turn in “Clink of Ice” by acclaimed international director Bernard Blier who has now made Dujardin his actor of choice, a role previously held by Gerard Depardieu. Dujardin’s acting conveys warmth, depth, vulnerability, humor, and accessibility; it certainly doesn’t hurt that he is incredibly handsome.

A wonderful film for the entire family, you will be amazed how personally engaging this movie is. Soundless? Not really because the film sings in your mind. And as Norma Desmond (Gloria Swanson) in “Sunset Boulevard” so famously said of the silent era, “We didn’t need dialogue. We had faces.”

Opening November 25 at The Landmark and the ArcLight in Hollywood.