“The Bond” – Not tied together [TELEVISION REVIEW]

Rae Harvey and baby joeys in "The Bond." Photo courtesy of Discovery +.

Discovery + has a new wildlife series that explores the relationship between humans and various animals; in this case kangaroos, dolphins, goats, and cheetahs. Only the first three episodes of this four part series were available and more’s the pity because the unviewed episode about a cheetah sanctuary in South Africa sounded promising. In fairness, the first episode of this nature series was excellent.

Episode 1 featured the story of Rae Harvey who runs a kangaroo sanctuary in Australia. Her unbreakable “bond” is with one particular kangaroo she calls Kanku who arrived one day and, unlike the other kangaroos she fostered at the sanctuary, never left. Never left is not entirely true, and that is what makes this particular short documentary particularly interesting and significant. Although the story of her devotion to an animal that is as beloved as it is reviled in its native Australia is cute, sweet, adorable, heartstring-pulling, or any other similar expression, it is the external forces that give depth to Rae’s mission. The wildfires that erupted and consumed the national coastland in 2019-2020, known as the Black Summer, resulted in the deaths of almost one billion wild animals.

Rae Harvey and Kanku in “The Bond.” Photo courtesy of Discovery +.

Rae, believing that her coastal area might be spared, had to scramble to save herself. The Roos, recognizing the danger almost immediately, began to flee inland to areas that had, in the past, been relatively safe havens. Not this time. When, after months away, she was able to return to her sanctuary, she found that virtually everything had burned to the ground. No animals were in sight. Miraculously, as she began to rebuild, some of the animals began returning, including the injured Kanku. It is the presence of Kanku that brings back several more animals and the healing process begins. Rae receives support to build again and she is able to bring in the necessary supplies and personnel to treat the burned kangaroos and reestablish her bond with the animals and with the surrounding environment. Throughout this saga, one is not only introduced to the animals but also to the devastating effect climate change has had on the area. Bush fires have always occurred but their ferocity has increased many fold. Unlike the episodes that follow, this becomes a narrative that is greater in importance than the human reciting it.

Episode 2 follows the story of Jay Sargent, a wealthy Easterner who bonds with a dolphin named Jojo when she and her husband take a trip to the island of Turks and Caicos in the Caribbean. Much of the episode follows Jay who encounters a famed local dolphin named Jojo on her first visit. Jojo, in turn, “introduces” the respectful Jay to other dolphins in the pod. Soon, she and her husband are spending weeks at a time at this island paradise so she can commune with the dolphins. This bond becomes especially important when, several years after her initial visit, she is diagnosed with cancer and she fights for her life. (The producers might have considered judiciously pruning the fact that she was airlifted off the island in a private Learjet.) When, through sheer force of will, she regains enough strength, her doctor allows her a short visit to the island so that she can try to reconnect with Jojo. She’s been away for so long, will the dolphin remember her? Of course there’s no point to this story if there isn’t a happy ending, at least as far as the dolphin is concerned. She’s still fighting, but she’s got Jojo on her side. I don’t want to be too glib because Jay’s cancer is ongoing and she’s an admirable woman who found a new focus when she discovered her love for dolphins. It’s just that it’s really hard to get too excited about a story about a wealthy woman traveling to the most expensive and exclusive Caribbean island to swim with dolphins, indulged by her very solicitous husband. Yes, Jojo is an exceptional dolphin and Jay found a new friend but the undercurrent of privilege is too hard to ignore. 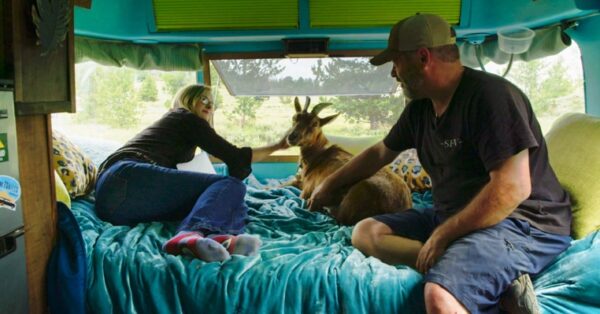 Cate and Chad Battles with Frankie in “The Bond.” Photo courtesy of Discovery +.

And that brings us to the last episode that was available for viewing. Episode 3 is about the Battles. Cate, Chad’s second wife, fell in love with a goat and brought this goat, Frankie, into their home after Chad’s children graduated from high school and left the nest. They then decided that they would give up their land-based life and hit the open road in an airstream pulled by Chad’s truck. Frankie, treated like their child, accompanied them everywhere and was, at least according to them, a hit wherever he went. The overall impression of this treacly cute story is that it would have been better suited to a ten-minute segment on the CBS Sunday Morning show. Cate, whose expiration date as an ingenue is way overdue, can be pretty hard to take. Frankie the goat is definitely a star but a little bit goes a long way, and the same is even more true for his human parents.

There’s nothing wrong with this new series and it is definitely family-friendly. But it could have been more and instead is a lot less.