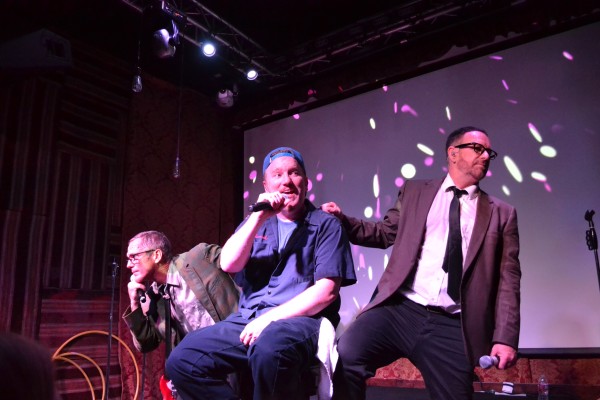 If you have seen the 2003 film Old School, then you are probably familiar with the scene featuring a wedding singer performing an unconventional rendition of Bonnie Tyler’s “Total Eclipse of the Heart.”

If have seen the 2009 film The Hangover, then you are probably familiar with the scene featuring the same wedding singer performing his own unique rendition of Irena Cara’s “Fame.”

If you haven’t seen either of the mentioned movies, allow me to introduce you to Dan Finnerty, the front man of The Dan Band. He is joined by Gene Reed and John Kozeluh, two of his identically dressed backup dancers and singers, and accompanied by a live band.

What The Dan Band does is cover songs originally popularized by female singers. The only difference is that their covers are quicker and more profane, therefore funnier.

That is what they did last Thursday night at Hermosa Beach’s own “Saint Rocke.”

The Dan Band immediately launched into the show with an inspired melody of Rhianna’s “Only Girl (In the World)” and “Rude Boy.” Occasionally in between songs, Dan Finnerty would choose random audience members to pick on with unbridled glee, sometimes improvising songs on the spot. One highlight involved Finnerty taking someone’s credit card and proceeding to sing the card’s numbers, to the tune of U2’s “Sunday Bloody Sunday.” The crowd loved it.

Highlights of the night featured The Dan Band’s covers of Eryka Badu’s “Tyrone,” Christina Aguliera’s “Beautiful,” and melodies featuring Agulilera’s “Genie in a Bottle,” TLC’s “No Scrubs,” and Brittney Spears’ “I’m a Slave 4 U,” along my favorite melody, “Don’t Cha” by The Pussycat Dolls, “My Humps” by The Black Eyed Peas, and “Milkshake” by Kellis. During the middle of this melody, Finnerty introduced his bandmates and his backup dancers and singers, who miraculously kept straight faces when performing with him. Both Gene Reed and John Kozeluh were given oportunites to demonstrate their impressive singing chops once introduced.

All in all, a fun night. Be sure to check out The Dan Band soon when they come into your area next time.