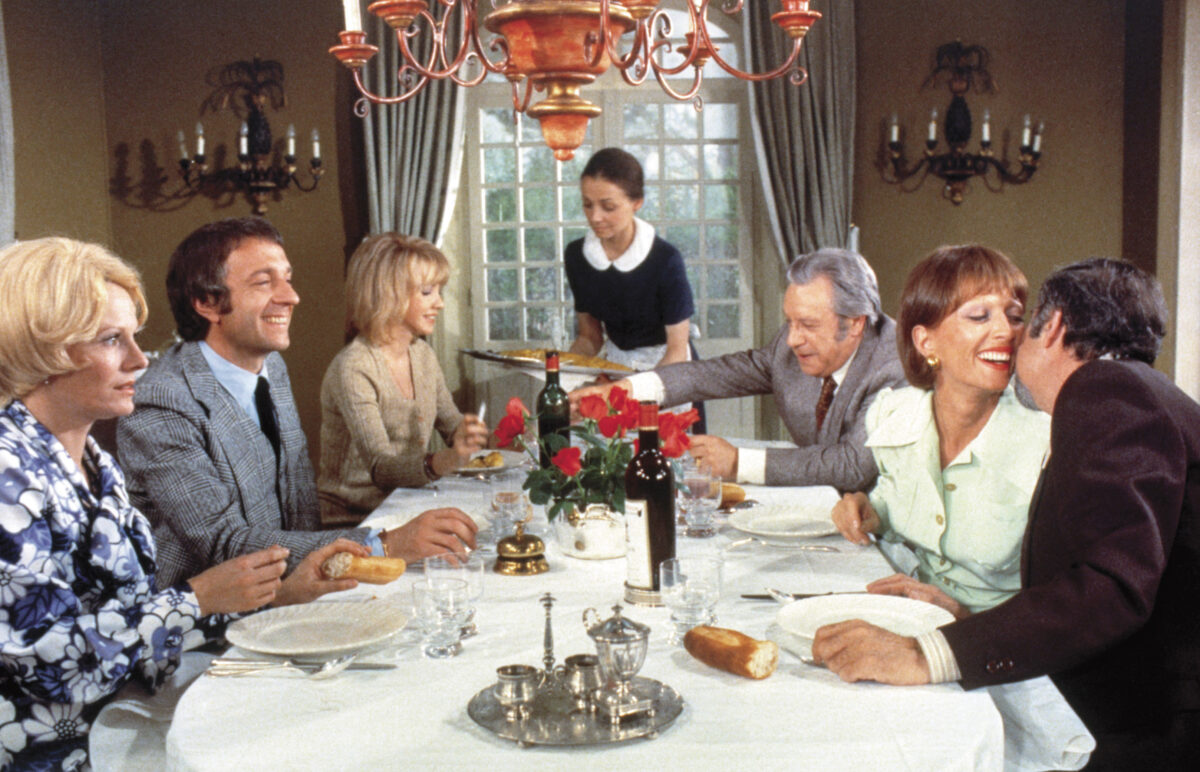 It is a true joy to discover that a beloved film from the past not only holds up but surpasses your memory of it. The new 4k restoration of Luis Bunuel’s “The Discreet Charm of the Bourgeoisie” is that and so much more!

Bunuel, whose first work “Le Chien Andalou” was a collaboration with Salvador Dali, moved in and out of surrealist circles. With “The Discreet Charm of the Bourgeoisie,” he returned both to surrealism and circles because the plot, if you can call it that, goes round and round, skirting reality but planting itself firmly within the absurd. It is a comedy both hilarious, preposterous, farcical, political, and Freudian, although Jungians might argue their interpretation from the standpoint of shared memory. Writing with longtime collaborator Jean-Claude Carrière, it is part of the humor that Bunuel succeeds in being all things to all people, depending on personal philosophy.

What are the bourgeoisie? Technically the term refers to the middle class, although from a Marxist standpoint it would refer to the capitalists who control the wealth. Our protagonists definitely comport themselves as a ruling class with all its privileges, with delusions bordering on the aristocratic. The humor and irony of this film are in the reality of who these people actually are. 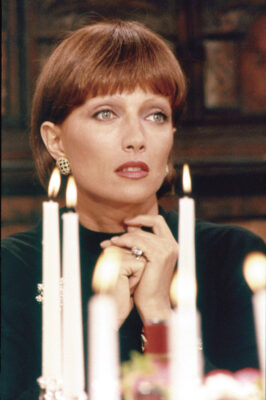 Stéphane Audran as Alice in “The Discreet Charm of the Bourgeoisie.” Photo courtesy of Rialto Films.

François and Simone Thévenot, Florence, and Don Rafael Acosta, Ambassador from the military-backed imaginary Latin American country of Miranda (a thinly disguised stand-in for the governments of Guatemala, Bolivia, Panama, Honduras, Ecuador, Argentina, Brazil, and Peru of that time), all dressed to kill, arrive at the home of Alice and Henri Sénéchal for a dinner party, much to the surprise of Alice. Expressing her regrets, she informs them that the dinner party was for the next night and Henri is not even there. After a few awkward moments, they insist that she accompany them to a terrific little restaurant nearby. Piling into the limo, they arrive at the bistro only to discover it locked. Soon a waitress ushers them in, explaining that the restaurant has recently changed hands but they are happy to serve them. It’s all very peculiar. Moaning is coming from another room. Investigating, they discover women wailing over a dead body. The owner dropped dead that afternoon and they’re waiting for the undertaker. This is definitely what might be called an inauspicious beginning. Dinner number one aborted, more to follow.

We soon learn that François, Henri, and Don Rafael aren’t just friends, but also business partners. Meeting at the Embassy, Don Rafael recounts his near disaster at the airport when security guards tried to open his diplomatic pouch. Using all his government resources, he escaped the inspection and is able to give each of them their cut of the heroin he has imported from Miranda. They’ll have to be very careful because they are being tracked not just by the police but also a rival drug cartel out of Marseille. Four other ambassadors have recently been arrested when cocaine was found in their bags. That they are sustaining their lavish lifestyles dealing drugs is hilariously offset by the hypocrisy of their disapproval of others taking them. Bunuel’s pointed ironic sense of humor is highlighted during a scene where our intrepid arbiters of social mores and deportment reveal their horror when watching their host, a French cavalry colonel, light up a joint and offer it up for a toke. Bunuel’s political leanings are far from hidden, and again displayed ironically when the aforementioned colonel skewers Don Rafael on his country’s well known crimes against humanity. 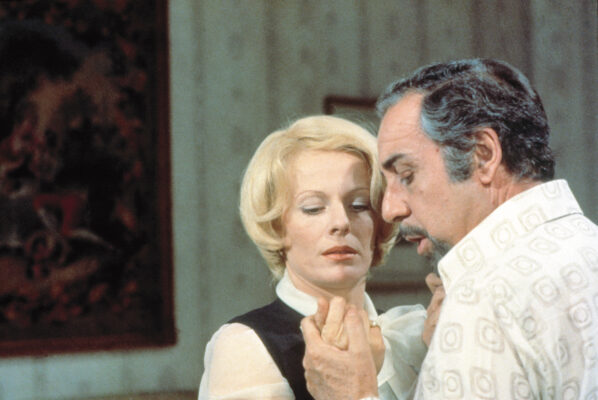 Delphine Seyrig as Simone and Fernando Rey as Don Acosta in “The Discreet Charm of the Bourgeoisie.” Photo courtesy of Rialto Films.

The Sénéchals try to make up for the initial dinner misunderstanding by hosting everyone for brunch. The group arrives, greeted by the dimwitted maid, but, once again, the Sénéchals are nowhere to be seen. Actually, they are at home, just not downstairs. The very randy Alice is upstairs seducing a not entirely reluctant Henri. Madame is apparently a screamer, so they move their amorous dealings into the garden. At first perplexed by the absence of their hosts, François and Don Rafael become convinced that Alice and Henri have fled to avoid a police raid. The group hightails it out of there. Henri and Alice are quite confused by the absence of their guests when they do, eventually, come back to the house. Bordering on classlessness, the outwardly sophisticated Sénéchals reveal the superficiality of their presumed position in society. Incongruity follows incongruity when the local Bishop shows up requesting that he be their gardener. The humor of his presence in their garden is in direct juxtaposition to his duties as the district Bishop where he is called on to give last rites to a dying parishioner who has a direct but previously hidden tie to him.

More attempted dinners follow with varying disastrous results. Soon the real world collides with dream sequences that mesh again with reality leaving the viewer breathless trying to discern fact from fiction, or at least according to what Bunuel wants us to believe. And after each phantasmagorical sequence, our intrepid band of players starts off walking in a nameless direction.

Absurdity is piled onto absurdity and reality and surreality blend until it is impossible to tell which is which. Bunuel takes an obvious pleasure in returning to his surreal roots, compounded by his ability to infuse the film with political statements about excess, human rights abuses, and basic criminality, adding immeasurably to the enjoyment his audience experiences. Always a social commentator on excess and hypocrisy (watch “Diary of a Chambermaid” or “Belle de Jour”), “The Discreet Charm of the Bourgeoisie” is more delightfully funny even as the sobriety of his message hits you.

The cast is as peerless today as it was then. Fernando Rey as Don Acosta was a Bunuel favorite. Here he is almost mocking the solemnity and villainy of his character in Bunuel’s “Tristana,” while making a sly reference to his role as the suave Marseillaise heroin kingpin in “The French Connection.” Jean Pierre Cassel as Henri Sénéchal was an international leading man playing sophisticates and French lovers, making him a natural in this role. Stéphane Audran portrays his wife, Alice. She beautifully played her imperious regality against her character’s middle class earthiness. Bunuel places Delphine Seyrig’s Simone Thévenot in an haute couture competition with Alice, heightening both the sophistication and the superficiality of both women. Bulle Ogier as Florence, Simone’s sister, is comic relief, underscoring the absurdity of these relationships as she is both incorporated into the group and left dangling as a loose appendage always angling for a “Dry Martini.” Paul Frankeur’s François Thévenot is the obvious arriviste and clueless cuckold to Don Acosta. It is hilarious watching him try to catch up, literally and figuratively, to the others. Julien Bertheau portrays the Bishop as man of God meets man of the people. Seeing him dressed as a proletariat gardner highlights the illogicality of his role as the murderous (oops, that’s sort of a spoiler) Bishop.

Once again this is a restoration released by Rialto Films without whom so many classics of the past would languish. I worship at their feet. Miss this one at your peril!