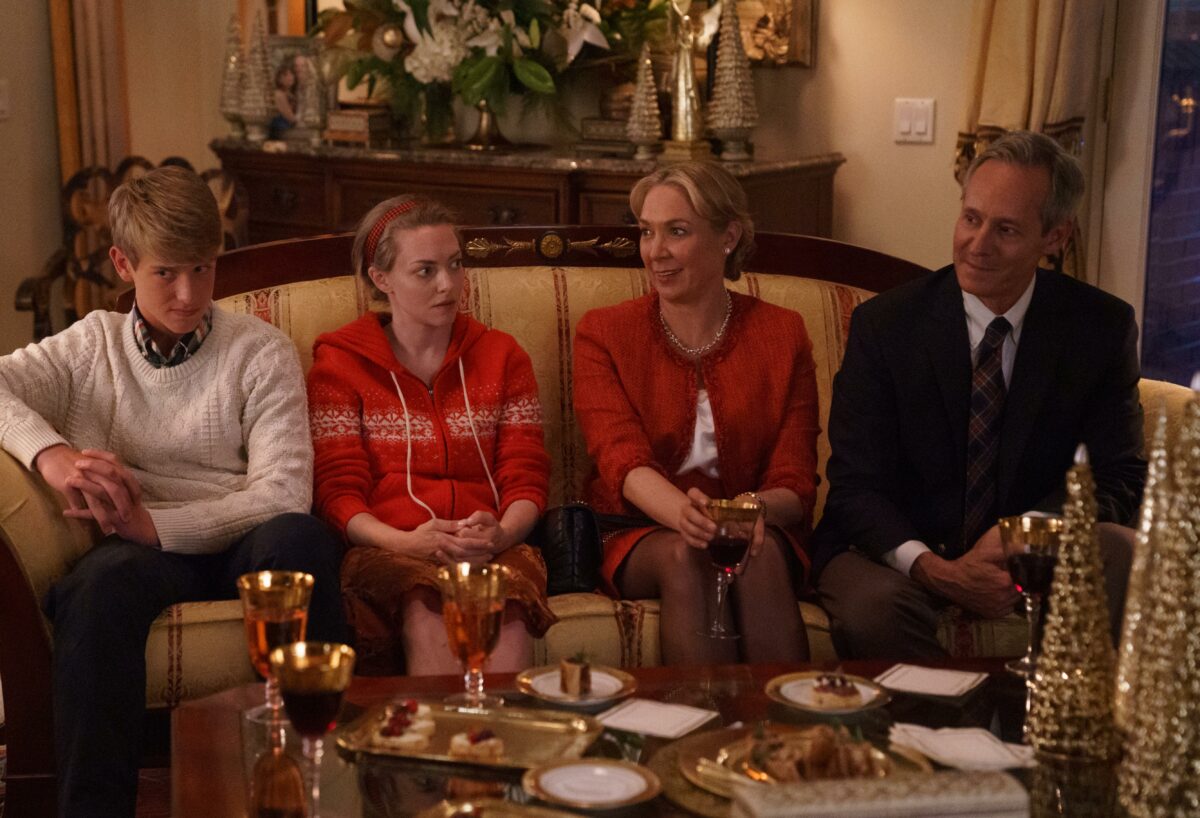 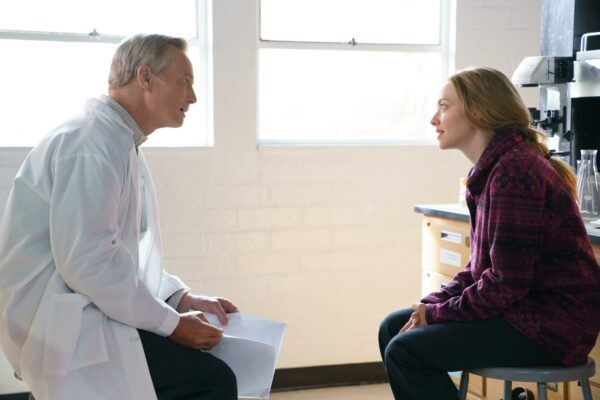 Bill Irwin as Channing Robertson and Amanda Seyfried as Elizabeth Holmes in “The Dropout.” Photo by: Beth Dubber courtesy of Hulu.

The story of Elizabeth Holmes has been told and told well in recent times. First there was Alex Gibney’s outstanding and chilling documentary “The Inventor: Out for Blood in Silicon Valley” (2019) where the chronology of Theranos, the so-called revolutionary company founded by Holmes is laid out clearly. Then of course there was the recent trial in which a seemingly chastened Elizabeth Holmes played both the wronged woman and the poor little girl who though she was doing good. The resulting convictions on four of the eleven charges of fraud and conspiracy was, at best, a mixed verdict but a guilty verdict nonetheless for which she will be doing real prison time (one hopes, given the extent of the losses suffered by her investors, that it will not be at a Club Fed). And now, Hulu is launching an excellent eight-part mini-series that lays out, in careful detail, the who, what, and where of how this fraud was perpetrated on the public by an ambitious and greedy Stanford drop-out whose goal, from the beginning, was to get rich as quickly as possible.

Created by Taylor Dunn, Rebecca Jarvis, and Victoria Thompson, and written by an outstanding group of writers, including a trio of Liz’s—Elizabeth Meriwether, Liz Heldens, and Liz Hannah— gives us a well-drawn portrait of the main “Liz,” Elizabeth Holmes, as well as explorations of her supporting cast including her lover/partner Sunny Balwani, as well as her parents, her professor-mentor Channing Robertson, and skeptical professor and eventual nemesis Phyllis Gardner. All the episodes are directed with panache by Michael Showalter, Francesca Gregorini, and Erica Watson. 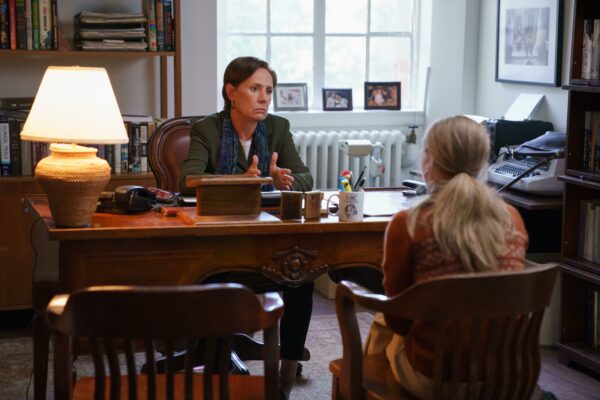 Laurie Metcalf as Phyllis Gardner and Amanda Seyfried as Elizabeth Holmes in “The Dropout.” Photo by Beth Dubber courtesy of Hulu.

Elizabeth Holmes was always a standout. Good looking and attention-craving, she was beloved by a supportive family and encouraged in her every endeavor. There was no sacrifice that they would refuse her and they were early investors in her project. And what was that project? She was convinced, based on some of her early work in the lab of her mentor Channing Robertson that she could devise a way in which a single drop of blood could produce the results of multiple test and yield instant results. Before her revolutionary idea, all blood testing was done in a medical setting and analyzed off site by the few companies that dominated the market and therefore the prices. Her proposed test could be done without the elaborate machinery, technicians, and set-ups of the expensive companies that controlled this area of healthcare.

Although methodical in her approach to science, Holmes had difficulty expressing her ideas in a cogent manner. She vacillated in her explanations, had poor eye contact, and her appearance was less than convincing. A make-over, both from the standpoints of personality and appearance, was in order and we see a more confident, attractive, assertive Holmes emerge as she is schooled in power-dressing, oral presentation, and explanatory obfuscation. If this were a Hollywood movie of the 40s, the meek, mousey, mumbling secretary would wake up the next morning, shake out and let down her hair, put on some lipstick, unbutton the top of her blouse, and with her new found confidence demand a raise, or in this case, money from venture capitalists.

This all sounds incredibly sexist but the evolution of Holmes from disorganized, immature, would-be entrepreneur to attractive woman able to con more schooled, sophisticated business and political leaders does, in part, revolve around a change in presentation, both verbal and appearance. This was a boys club and her large eyes, blonde hair, and well-dressed appearance played a role in getting her foot in the door. Walking into the room depended on her intelligence. 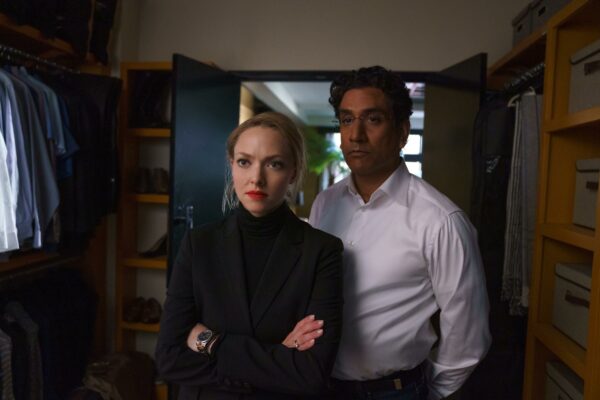 Amanda Seyfried as Elizabeth Holmes and Naveen Andrews as Sunny Balwani in “The Dropout.” Photo by: Beth Dubber courtesy of Hulu.

The Elizabeth Holmes in the Federal trial tried to put the genie back in the bottle and blame her older lover and later business partner Sunny Balwani as a Svengali who made her do the things she did. It wasn’t her fault. The trial gives us a sense of Holmes channeling Tonya Harding at the Olympics where she’s asking for a do-over because her shoelace was undone and she didn’t know her boyfriend was going to knee-cap Nancy Kerrigan.

The evolution of the Elizabeth Holmes of the mini-series is from naiveté to first class manipulator who used Sunny as much as he used her. But don’t let me spoil it for you. This series fills in the gaps that the documentary could not. The documentary was primarily a history of the fraud of Theranos as promulgated by Holmes. “The Dropout” is a deeper dive into Elizabeth Holmes and her evolution into one of the decade’s major fraudsters. It’s hard to deny that there is an agenda here. Holmes is a modern day villain interesting primarily because her gender plays a large role in our perception of her. It is what initially prevented her from entering the boys club and it is what blinded others to the fraud she was perpetrating.

The cast is outstanding beginning with Amanda Seyfried whose physical appearance and vocal mannerisms match those of Holmes in a truly spooky way. Her performance is nuanced and mesmerizing. Her Holmes seems to be almost on the spectrum with her lack of empathy. Naveen Andrews is an effective Sunny Balwani, abuser and abused, perp and victim. Bill Irwin as Holmes’ Stanford mentor and early board member is both skeptical, clear-eyed, and casualty. Laurie Metcalf, once again, steals every moment she’s on screen as the only person to see the real Holmes and the impossibility of her project. She is a Cassandra who actually does get to say, “I told you so.” Other actors of note who contribute to the depth of the portrayals are Kate Burton, William H. Macy, Sam Waterston, and Steven Fry. Large roles or small, they make their characters come alive.

Hulu is rolling out the first three episodes beginning Thursday March 3 with subsequent episodes streaming weekly. Don’t miss this one.