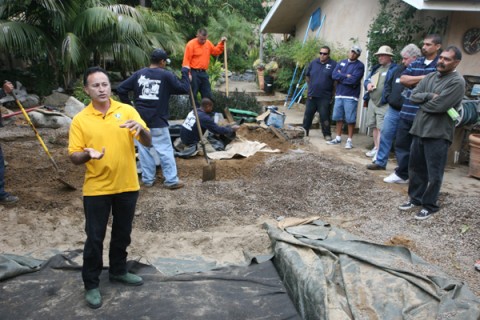 Mike Garcia unveils the new rainwater harvesting system in his backyard, which replaces his pool. Photo by Mark McDermott

Mike Garcia’s home looks like that of the prototypical Californian water thief.

Despite that fact Garcia – like everyone else in Southern California – lives in a desert, there is water, water everywhere surrounding his North Redondo Beach home. His front yard contains three waterfalls, a banana tree, and a tree that bears little red fruit similar to strawberries. His back yard features two waterfalls, a koi pond and a swimming pool.

It’s colorful, lush and watery. But things are not entirely as they appear.

First of all, every plant is drought tolerant and requires very little water. The water used is recirculated through an evaporation-free drip irrigation system that recollects excess water. And on Saturday morning, Garcia’s swimming pool became something else: a rainwater harvesting system that will capture up to 3,600 gallons of water that will feed into this irrigation system.

By filling his pool, Garcia is taking a small but a revolutionary step. Much of the water used for his lawn will hereafter be different from the water at any other residence in the area. It won’t be imported from the Colorado or the Sacramento rivers.  His water will be local.

“This is historic,” Garcia told a group of onlookers Saturday morning as he and workers from his landscaping company, Enviroscape, filled his pool with the recycled polypropylene “EcoRain” structures that will support the foundation of a patio. The structures will only take up 5 percent of the pool’s 4,000 gallon capacity, however – meaning 95 percent of the space will store rainwater.

His new patio will keep his lawn green. 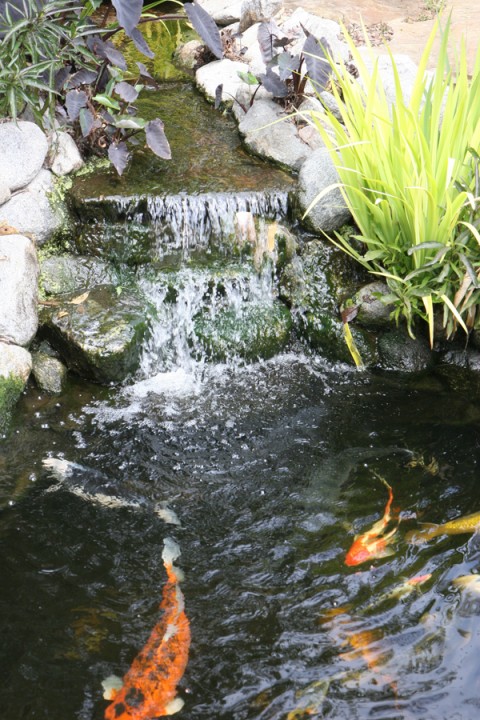 It is historic because it so strongly cuts against the grain. Garcia believes that his is the first pool in California to be converted into a rainwater collection system. He argues that what he is doing is not futuristic – it is, in fact, tailored to the current realities of an arid region. The recent drought, coupled with the slowing trickle of the Colorado River (which no longer makes it to the Pacific Ocean), has further stressed an already tenuous water supply. According to the Metropolitan Water District, Los Angeles County imports 1.5 billion gallons of water each day.

Projections indicate that the price of water could triple within the next year. Tap water, Garcia believes, will one day in the not-so-distant future be as expensive as bottled water.

“Am I going to move to Washington, where water is plentiful, or am I going to fight back?” Garcia said. “Hell, I am fighting back….It’s important for everyone to realize we’ve got to take action now. It all boils down to sustainability, and people don’t really know what the hell sustainability is. But in a nutshell, sustainability is living today without borrowing from tomorrow.”

Garcia has long been a leading environmental activist in the South Bay. He helped establish the California native section of the Manhattan Beach Botanical Garden in Polliwog Park and recently helped with the drought-tolerant garden Redondo Beach’s Wilderness Park. On April 24, his work will be featured on the A&E channel’s Fix This Yard. On the show, Garcia and his company transform a Lawndale residence’s yard with a “California-friendly” colorful but drought-tolerant landscape that produces no runoff whatsoever.

“I think Mike has been a really visionary leader in his business,” said Mayor Mike Gin. “He has had Enviroscape for the past 25 years, and the mission and vision of his company has always been focused on the environment and California-friendly, drought-friendly landscaping. Now that we continue to face a severe drought – despite the rains this season – we need to really be focused on our future water supplies. The work Mike is doing, and the foundational projects he has done in the past, has really created a great example for all of us to really change our behavior and think about how we landscape our own properties for the future.”

The typical pool, Garcia said, loses 24,000 gallons of water through evaporation each year. Other negative environmental impacts associated with pools include the energy costs in heating and circulation and the chemicals used to keep the pool clean. Garcia said he isn’t urging everyone to get rid of their pools, but suggested that those who are at a certain point in their lives – say, after the kids have left – consider if they still need their own pool.

Frayne McAtee, a specialist with ProEco Products (who make the pressurized water pump used in Garcia’s system), said that rainwater harvesting doesn’t have to use a pool. A collection tank can be smaller and can be placed anywhere, even under a driveway.

“If you need to utilize space, you can utilize it,” McAtee said. “When it comes to the environment, people always wonder, ‘What can I do? This is part of the message – there are small steps that people can take.”

“It’s simple stuff that makes a big difference, and this is just part of it,” Garcia said.

Mary Angle, a consultant with Stormwater Solutions and EcoRain, estimated that Garcia would recoup the $20,000 cost of installing the rainwater harvesting system in less than six years through water savings. Angle said that a similar system – utilizing the EcoRain structures – was installed by the City of Hermosa Beach along the border of its beach in order to capture runoff.

Runoff is another big environmental issue along coastal California. According to the Surfrider Foundation, more than 300 million gallons of runoff – rich in pollutants – goes into the ocean in LA County every day. Garcia’s lawn, however, isn’t part of this problem. Even his driveway is environmentally sound – he replaced concrete (which encourages runoff) with Flexipave, a porous but strong surface made from recycled car tires.

The only runoff Garcia will be a part of is going to the ocean himself.

“If I want to swim, I live so close to the beach,” Garcia said. “It takes an act of faith to do this. But you know what? It’s the right thing to do.” ER