The future of scouting in the South Bay 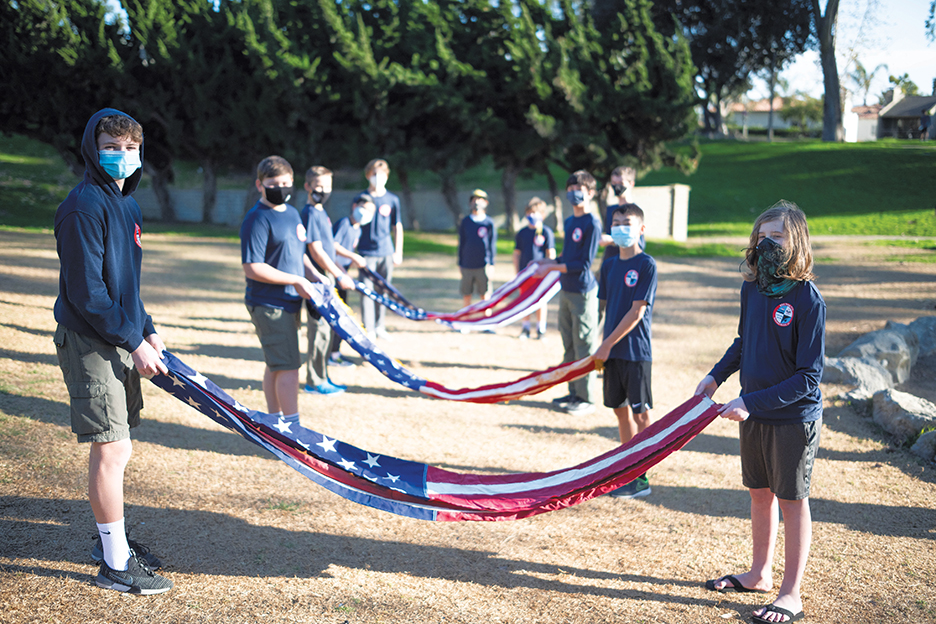 As 11th graders at Mira Costa High School in Manhattan Beach, Kieran Lyons and Henry Johnson have spent the better part of this year at home learning how to be good students, remotely. But as leaders in Manhattan Beach’s Boy Scout Troop 713 — they’re the ones who are teaching.

Under normal circumstances Lyons and Johnson, senior patrol leader and junior assistant scoutmaster, respectively, would be organizing snorkeling trips for the younger scouts in Troop 713, leading campouts and running fundraisers that give back to the South Bay community.

But since the pandemic began, Lyons and Johnson have been limited to running weekly Zoom meetings. They’ve had to come up with creative ways to keep the scouts entertained, including hosting virtual backyard campouts and planning a dog-sledding trip in Minnesota for next year.

“You don’t join Boy Scouts to sit at your computer and learn about the outdoors from your desk,” Johnson said. “That’s been the hardest thing because you’re not going to get any camping experience in your backyard.”

The future of the Boy Scouts of America, which has been around since 1910 and is one of the largest youth organizations in the US, has never been more uncertain. A month before COVID-19 began cancelling longstanding Boy Scout events, the National BSA filed for Chapter 11 bankruptcy protection amid a flurry of lawsuits from men who say they were sexually abused as Scouts. The Boy Scouts, an organization of about 2.3 million youth and 1 million adult volunteers, is currently restructuring its finances.

In November, the filings went public and revealed that over 92,000 claims of sexual abuse by members of the organization were made over the years, reigniting decades-long conversations surrounding BSA’s vetting process for volunteers and the overall safety of the younger scouts.

However, even with a national pandemic keeping kids inside and a looming bankruptcy, the Boy Scouts are still very much alive, according to Jeff Sulzbach, scout executive for Los Angeles County, which currently has more than 17,000 scouts. 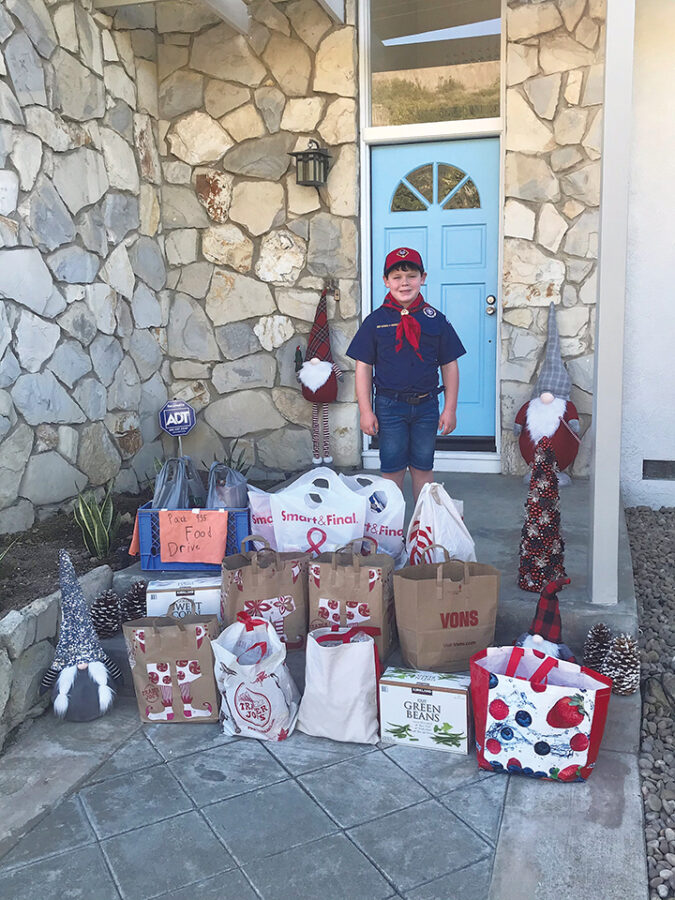 Wolf Scout Daniel Cruz and his family coordinated a food drive for the Toberman Center in San Pedro at the start of the pandemic. Photo Courtesy of Jeff Sulzbach

“We have thousands of kids having a great experience in scouting, even during a pandemic,” Sulzbach said. “Kids are safer in scouting than they are anywhere else.”

A large majority of the abuse claims date back to the 1980s or earlier, according to Sulzbach. He says this is because back then BSA didn’t have the rigorous vetting process in place for scoutmasters and volunteers.

“What happened decades ago is tragic and it’s a horrible thing,” Sulzbach said. “We now have what I would describe as today’s best protection program. Unfortunately, BSA didn’t always have those programs in place and in fact most organizations didn’t.”

In 1987, Sulzbach said, BSA began utilizing what’s become one of its core practices over the years: two deep leadership.

“Meaning there’s never a time when only one adult leader is present during a scouting activity. You always have at least two leaders and there are multiple children as well. So kids aren’t alone with a leader. Ever.”

As a former Boy Scout and current Scoutmaster with Troop 713, Stephen Johnson has witnessed how scout leaders have had to adapt to strict stay-at-home orders.

“In my opinion, our troop emphasizes scout leadership more than any other troop,” Johnson said. “I’m the Scoutmaster but a vast majority of the decisions are made by the scouts and so they have a lot more responsibility.”

Only three percent of scouts achieve the rank of Eagle. Despite the odds, 19 scouts from Troop 713 achieved Eagle rank between 2018 and 2019.

Johnson argues that the scouts are in a catch-22: the outdoor survival skills learned in the Boy Scouts are more important than ever in the face of a global pandemic and climate change. However, restrictions put in place because of the pandemic are preventing scouts from being able to learn those skills.

“The ability to get out of the classroom to learn in the field, there is going to be more and more of a need for that,” Johnson said. “And that’s going to exist whether we are able to open schools or not.”

Troop 860 in Hermosa Beach is the largest Boy Scout Troop in the South Bay area, with 50 to 115 scouts at any given time. Scoutmaster Steve Staso has been with the Troop since 2011 and is a former Boy Scout himself. He said Troop 860 started with 65 scouts in March.

“Of our 65, we’ve temporarily lost interest from about 20 scouts since the pandemic,” Staso said. “And some of them are saying ‘we’re just gonna take a break,’ and we try to convince them not to. Because if you drop out of anything it’s unlikely that you’re going to come back.”

“We still can’t go camping. We can’t really do anything together,” Staso said. 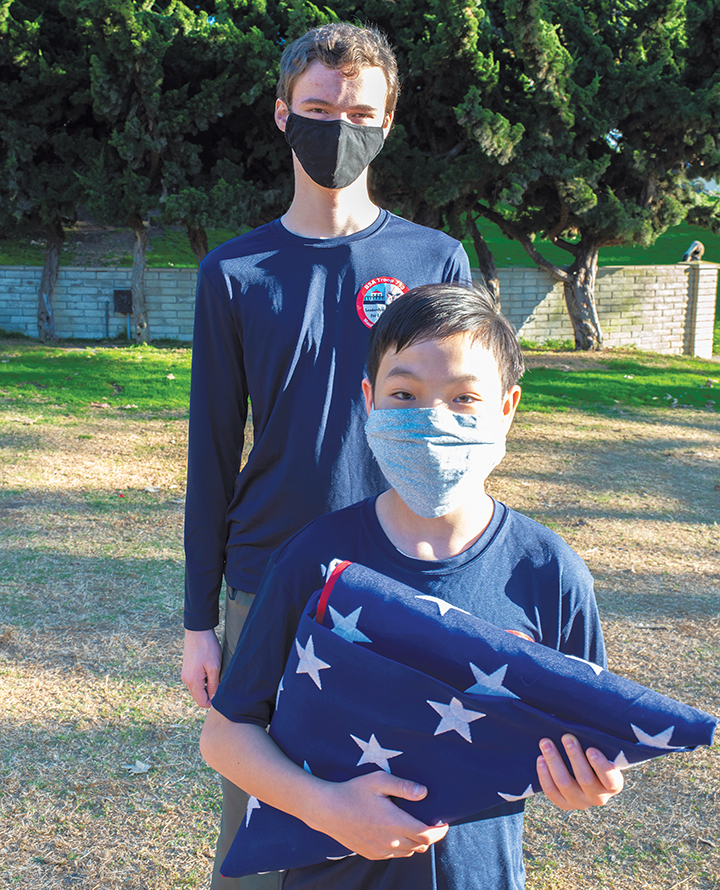 However, both Troop 860 and Troop 713 have found ways to stay busy amongst all the cancellations and chaos. In addition to weekly Zoom meetings, the scouts also do group hikes via Zoom and have backyard campouts.

“With everything shutting down we’ve been more focused on getting things done rather than learning,” Lyons said. “We’ve found ways to do service projects. We did a virtual beach clean up where you could go down to the beach and pick up trash for an hour and didn’t have to be with anybody.”

Both Lyons and Johnson will be heading to Minnesota in February for five days of dog-sledding at the Northern Tier High Adventure, one of a collection of bases run by the BSA.

“It’s one of the more COVID safe activities,” Johnson said. “You’re only allowed to go in groups of six and when we went the first time to canoe, I think we only saw one or two other campers the entire time.”

Johnson said he doesn’t believe virtual scouting will last past the pandemic.