“The Heal” has bite at the Getty Villa 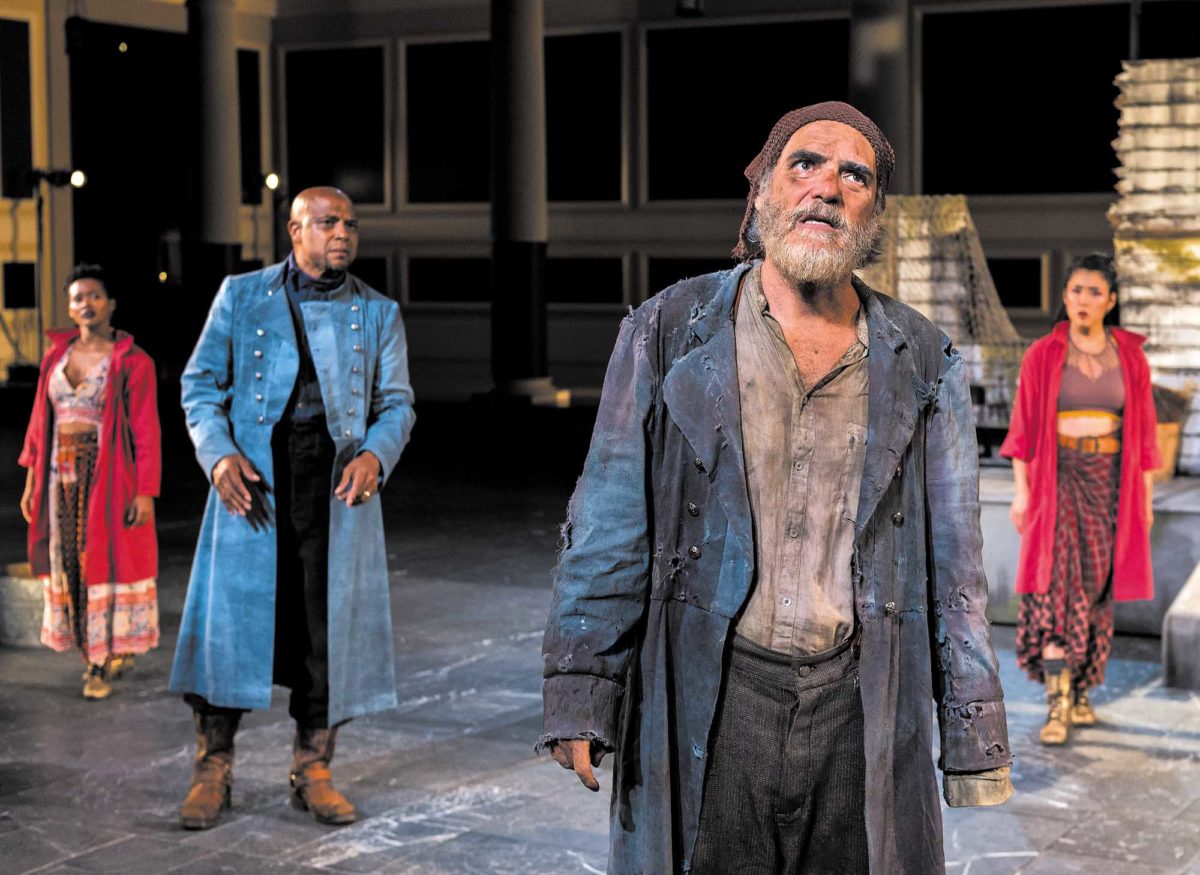 Getting off on the wrong foot

“The Heal” is under the open skies at the Getty Villa

If you’re going to retitle “Philoctetes,” the drama that Sophocles wrote in 409 BC, “The Heal” is a better choice than most because it loudly suggests “heel,” which not only refers to the back part of your foot but to the command (as in Fido, “Heel!”). So right off the bat, writer and director Aaron Posner and his Round House Theatre have set a wry tone for their work.

“The Heal” is a co-production between Round House and the Getty Museum, and it’s the fourteenth annual late-summer play to be presented in the outdoor amphitheater (officially the Barbara and Lawrence Fleischman Theater) at the Getty Villa in Pacific Palisades. It opened last week and runs through the 28th of this month.

Most of the plays that Sophocles wrote have disappeared through the trapdoor of history. And of the 120 he is said to have written, only seven survive today. Furthermore, they’re all better known than “Philoctetes,” and include “Antigone,” “Electra,” and “Oedipus Rex.” Those you recognize, right? 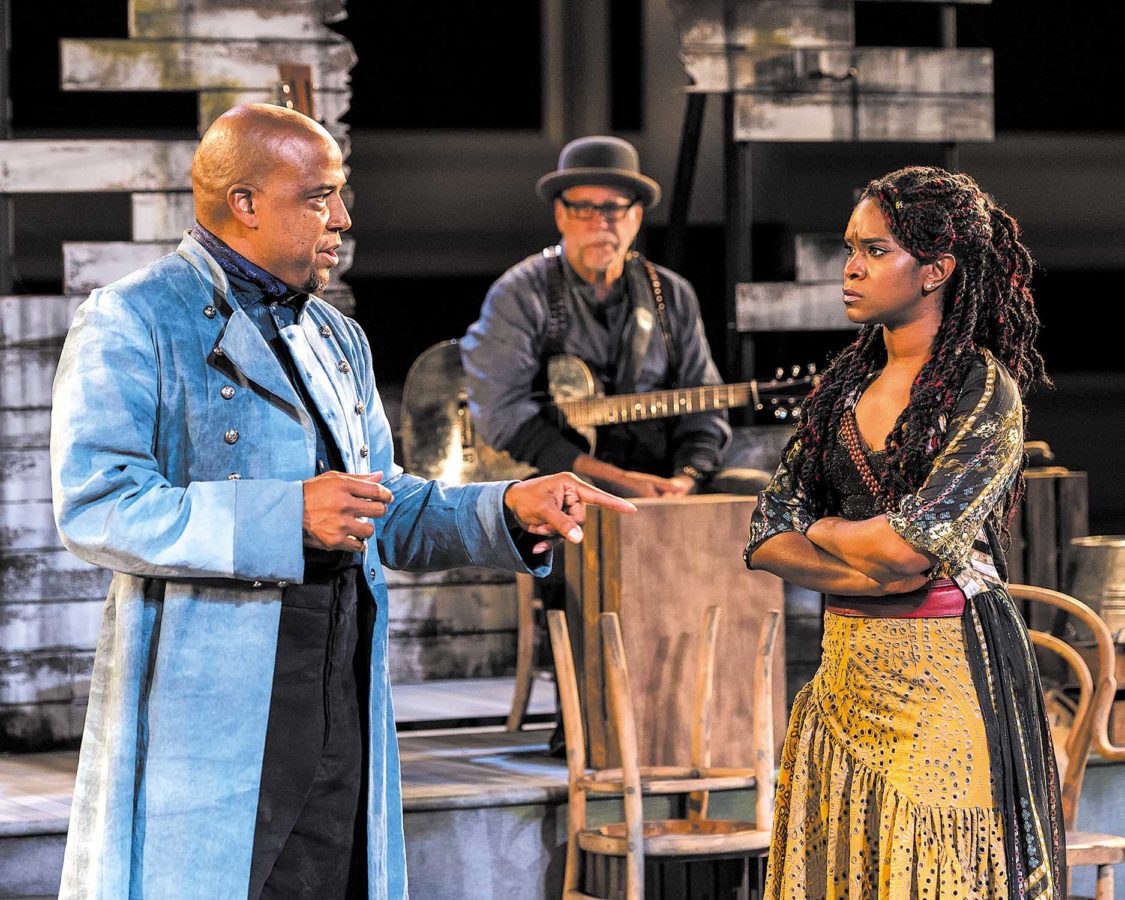 Some backstory is necessary. Philoctetes was considered the greatest Greek archer, and he earned the eternal gratitude of Herakles because he built and fired up the great man’s funeral pyre. In appreciation, Herakles bequeathed his bow, arrows, and quiver to Philoctetes.

After Helen of Troy was abducted, Philoctetes joined the expeditionary fleet that went to bring her back. However, on one of the pit stops along the way, Philoctetes ignored a metaphoric No Trespassing sign, and the nymph Chryse ordered a serpent to nip him in the heel. Naturally it wasn’t a gopher snake or a king snake, but a poisonous viper.

Well, the festering wound didn’t heal, and Philoctetes’ cries of agony were so intense that Odysseus and Diomedes (or maybe it was Nepotolemus) eventually said, “Enough of this broken record!” and they stranded the injured man on the island of Lesmos. Needless to say, Philoctetes was not a happy camper. Now another kind of wound was festering inside of him. 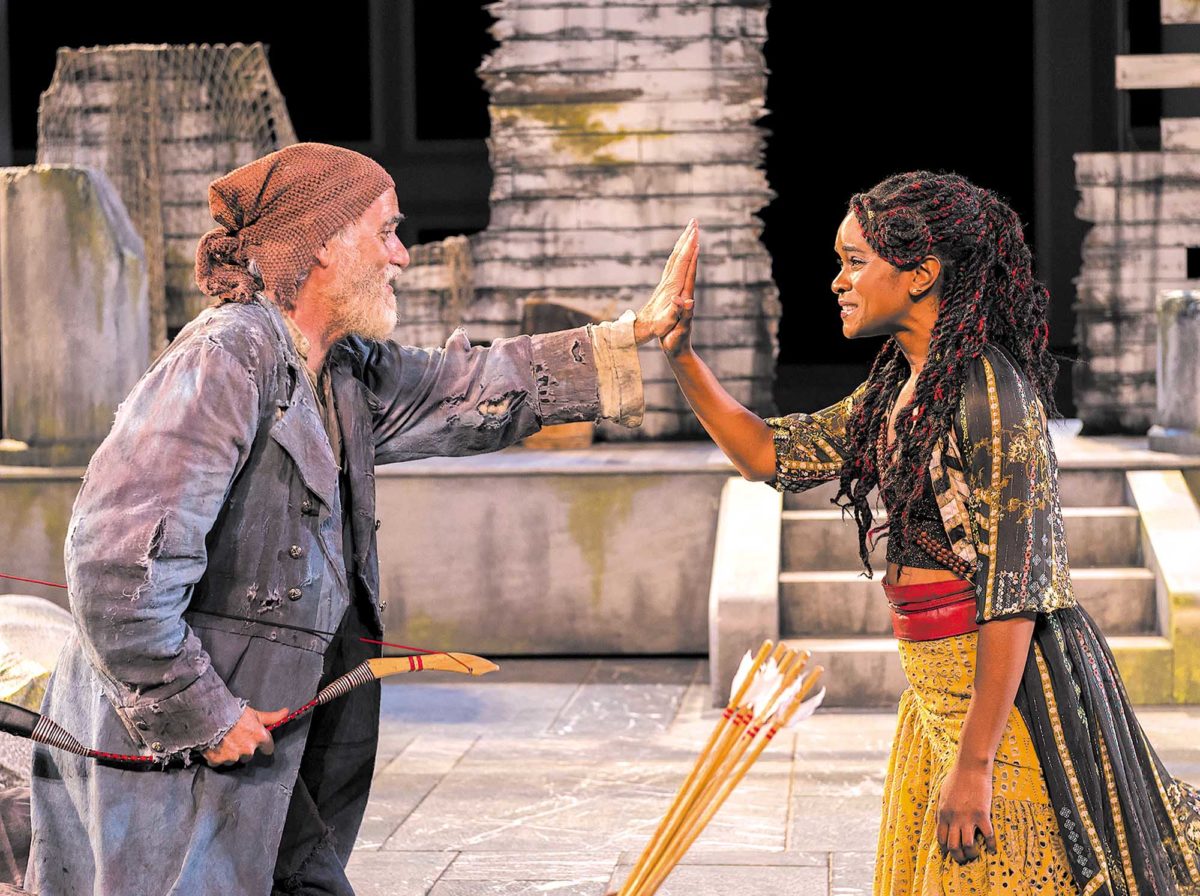 Eric Hissom as Philoctetes and Kacie Rogers as Niaptoloma. Photo by Craig Schwartz

This is where the play picks up. Folksinger (and composer) Cliff Eberhardt, as Demodocus (a minstrel at the court of Alcinous of Phaecia, for those who want details), sits on what resembles a back porch and intones that we’re all wounded, everyone’s wounded; how do you hurt and how will you heal? There’s a coda to all this at the end.

Meanwhile, Troy is under siege. It’s the ninth year in what will prove to be a 10-year slugfest, but after Achilles is slain (an arrow to the heel; how ironic!) the Greeks learn that the battle cannot be won without the mighty bow of the mighty Heracles. But how to get it from Philoctetes, who’s been nursing his wounds and his grudge for nearly a decade?

Odysseus (Lester Purry) calls upon Niaptoloma (Kacie Rogers) to do the dirty work: She’ll have to place morals and ethics to one side of the equation and beg, borrow, or steal the bow from Philoctetes. Essentially, as Odysseus tells the girl, deceit is hereby justified if it’s for the greater good, which is to win the war, snatch Helen, and skedaddle back to Greece.

In this version (always referred to “as inspired” by Sophocles), we have the daughter rather than the son of Achilles who’s being asked to do the dirty work. As far as I know, “Niaptoloma” doesn’t exist in mythology. But it’s a fine move, and Rogers is a superb casting choice.

Niaptoloma (now called Nia) isn’t entirely convinced that dishonesty is the best course of action, even after she encounters the embittered Philoctetes (a haggard Eric Hissom) and tries to charm him so she can abscond with the bow. Although he’s initially on his guard, Philoctetes lightens up, tells Nia that he knew her as a child, held her in his arms, loved her father, and, when she says she’ll bring him along, praises her to the skies to the point that she loses her focus. Oh my god, she thinks, I can’t go through with this! 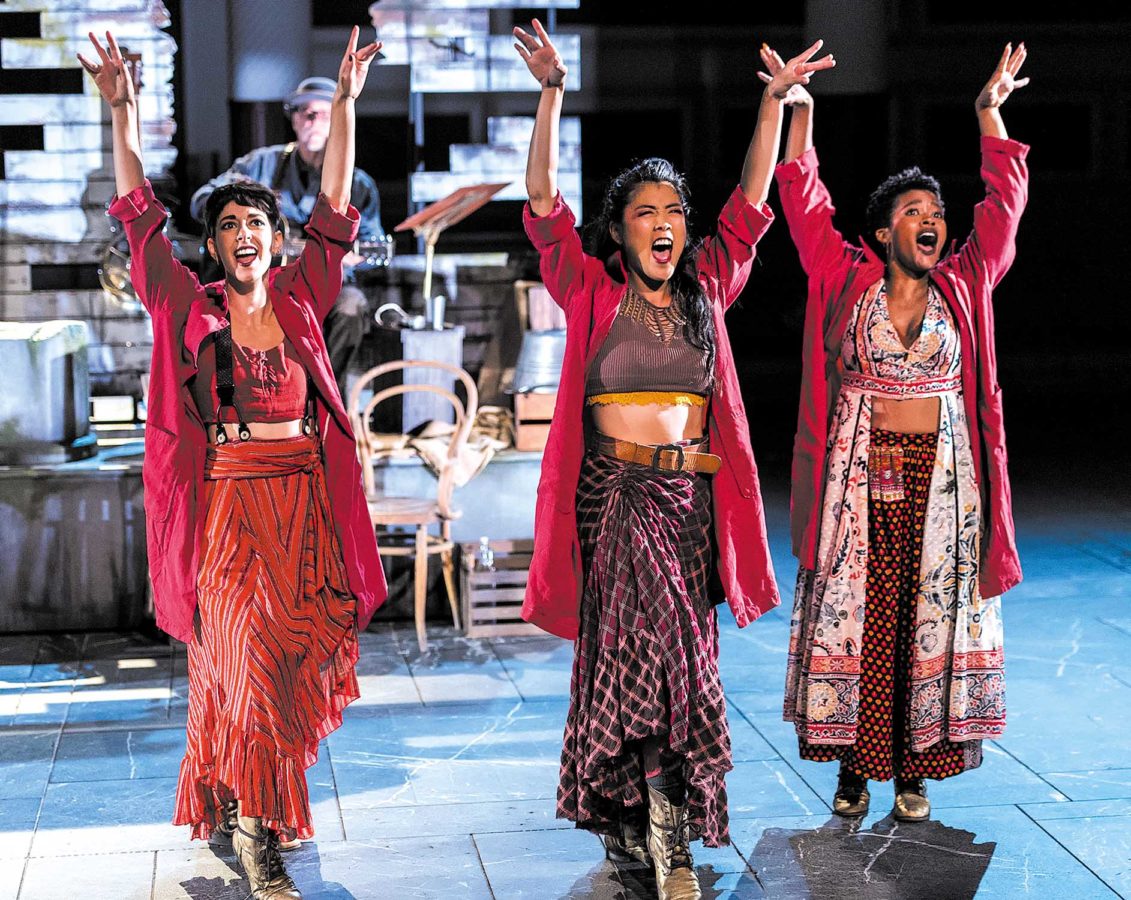 Emma Lou Hébert as Calliope, Eunice Bae as Melpomene, and Jaquita Ta’le as Thalia, with Cliff Eberhardt as Demodocus in the background. Photo by Craig Schwartz

It’s all serious theater, but it’s also funny and immensely engaging. Meanwhile, we have a Greek chorus, a trio of young women (Eunice Bae as Melpomene, the Muse of Tragedy; Emma Lou Hébert as Calliope, the Muse of Epic Poetry; and Jaquita Ta’le as Thalia, the Muse of Comedy). They add a smooth, seductive touch to this production, dropping wry comments here and there, and delighting us with their often synchronized choreographed moves (with a nod here to Erika Chong Shuch).

Eventually, when Odysseus shows up, Philoctetes learns that he’s been played for a fool, and as arguments and counter-arguments fly furiously back and forth, we have the crux of the play with overwhelmed Nia at the center of it. However, she valiantly holds her own (daughter of Achilles, what do you expect?), and comes up with a quasi-Solomonic decision at the end.

Apparently, as Sophocles wrote it, the play reaches a climax when Heracles intervenes (from the Netherworld) and says, basically, “Hey pal, do us all a favor, go, and afterwards I’ll arrange for a doctor to cure your wound.” The aftermath of the story, which doesn’t concern us here but what the heck I’ll tell you anyway, is that Philoctetes avenges the death of Achilles by shooting Paris in the heel with a poisoned arrow. If you’ll recall that Eurydice also died, because of a snakebite on the heel, you’ll begin to wonder why cowboy boots weren’t invented sooner. 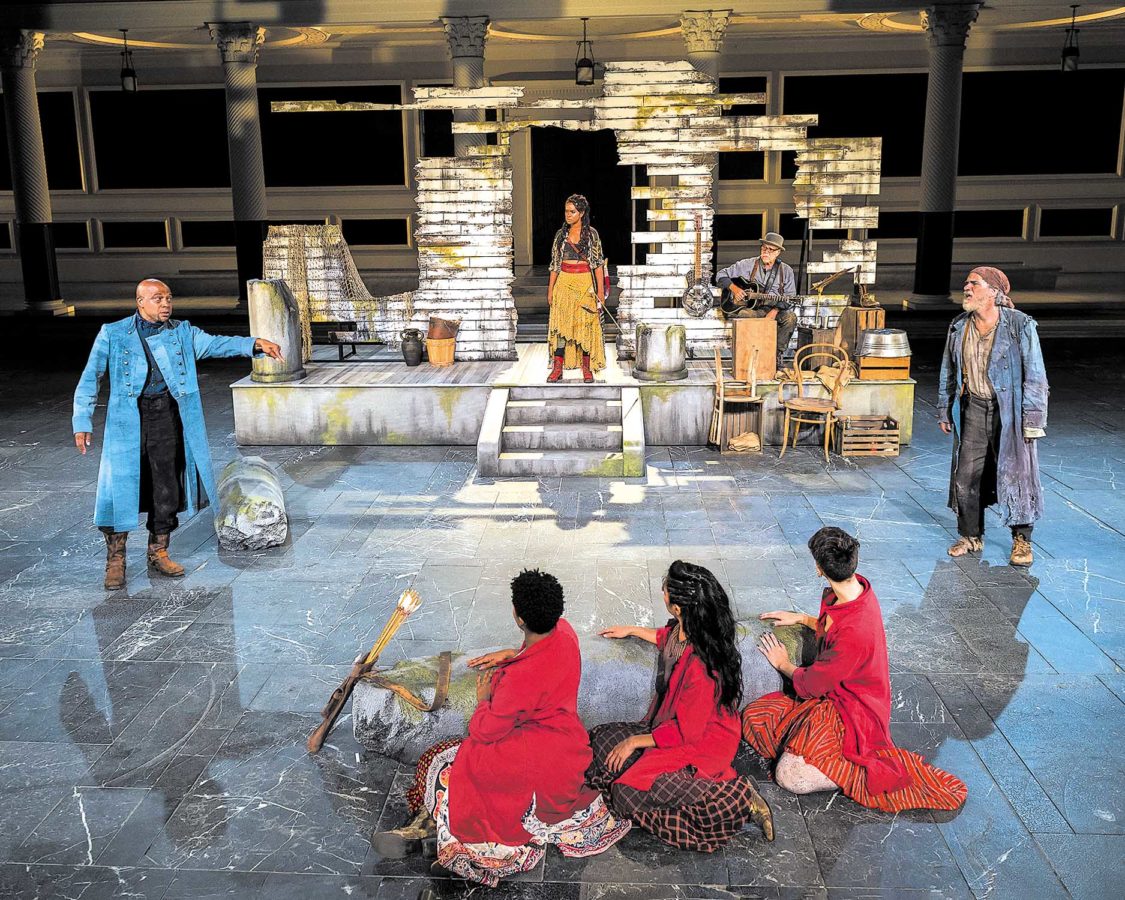 But here we’re left with more of a new age ending, that we’re all wounded (just as Demodocus told us at the start), but that this doesn’t have to be how we define ourselves. We are, furthermore, encouraged to face ourselves and not lie about what we see. It’s sort of a sham finale, and probably not what Sophocles was thinking when he put the finishing touches to his play, but it’s palpable in the present context. Those who want to know the “true” story (as if a mythic yarn isn’t a tall tale to begin with) can pursue this on their own nickel. The rest of you should look over your calendar and plan an evening outing up the coast.

A word on the costume design by Sarah Cubbage, the sound design by Andre Pluess, and the scenic and lighting design by Thom Weaver: all top-notch and professional. In comparison with the previous outdoor theater productions in this ongoing venture, and I’ve only missed one somewhere along the line, “The Heal” certainly ranks among the best.

The Heal is being performed Thursday through Saturday at 8 p.m. All performances are at the Getty Villa, 17985 Pacific Coast Hwy, Pacific Palisades. Tickets, $40 ($36 seniors and students) on Thursday; $42 on Friday; and $48 on Saturday. Through Sept. 28. And, starting this year, newly designed seat cushions with back support are providing a level of comfort that’s been missing since day one. Themed food and beverages available, including the Snakebite, an alcoholic drink that lives up to its name. Trust me on that. (310) 440-7300 or visit getty.edu. ER