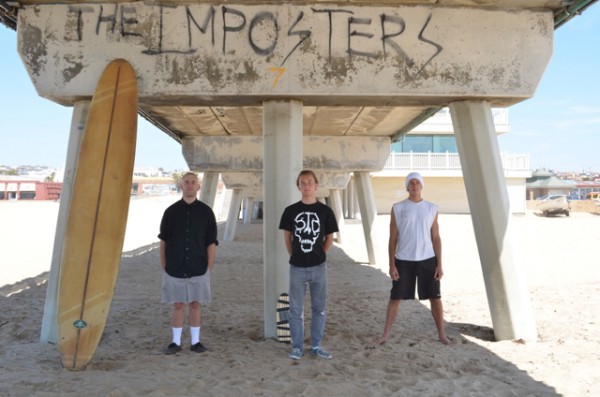 “All of a sudden I have something to do all summer that’s fun and stimulating. What more could I even ask for than watching surf videos and jamming with my friends?”

Hermosa Beach resident, MCHS class of 2011 graduate, local musician and surfer Nickolai Preiss would perhaps be happy with just that; but there is “what more?” Although he may not be asking for it so much as asking about it, and he’s certainly trying to do something about it.

“What I’m trying to do is keep our culture alive,” he says. “I’m not like the one to try to do that — I do music and surfing… I don’t want to be the spokesperson… but I’m not seeing anyone else try to do it, and I feel like the whole vibe is hanging by a thread and I just want to hold it over for the summer.”

“He’s always trying to do something,” says Blake Zingale, MCHS class of 2010 and longtime friend of Preiss. “Ever since he’s been like 13, he’s always been a go-getter, just doing stuff himself. Kinda like an entrepreneur ever since he was ridiculously young, like 12 or 13 years old, when we all started playing music.” Zingale sings and plays guitar in the local band, Good Fellas.

The “vibe” is what Preiss embraces as the core of South Bay flavor and culture: counterculture surf, skate and music; roots which he feels are slipping away.

“I’ve been hanging out and seeing Classic Burger, Greekos, Re:Style… the record stores — Rocket Ship, Scooters, Go Boy, Off Beat… everything that meant culture to me when I was growing up is all out the wayside; it’s all just being buried in history… And at the same time I’ve been encountering kids… who just don’t even have half a clue what’s gone on here where they’re growing up… I’m still growing up, but when I was younger and just totally fresh, that’s just the stuff that was given to me, the standard. That was just like home base… old school skateboarding and surf culture, all the music… We were the counterculture.”

It is undeniably true that we live in a fast-growing area where heritage is sometimes uprooted quicker than a dead tree. Homey beach cottages are scrapped like yesterday’s papers for four-on-a-lot living quarters so close you’d swear you can hear your neighbors breathe. World-class jazz and blues clubs become overshadowed by DJs. Historic theatres morph into coffee and ice cream chains. Sharks circle in the sea of consumption, and counterculture becomes Subway.

To Preiss, it’s a noticeable value shift, in which beach life and beach culture gives way to the face value of beach property.

“Our rich culture is just being swept aside from the gentrification that’s going on,” he says. “It almost scares me to imagine if I was 11-years-old now… Where do you find culture?”

Preiss practically gets anxious when talking about the original surge, a golden era if you will, of surfing in Southern California and the culture surrounding it. He lends a degree of admiration for the old timers who grew up in the glorious days of Jacobs, Bing, Weber, Noll, and the like and considers his own generation, just nigh on 20 years of age, to have gotten mostly only the ashes of a culture whose smoldering embers have simmered to a flicker.

In an effort to preserve, invoke and encourage a nostalgia he feels to be lost under the transformation of his hometown(s), Preiss has organized a South Bay summer series event evocative of a different time. A time when soundtracks to classic surf films were made from the director pulling a hippie band out of the woods to write and record the music as it came to them while watching the film on a projector. And that’s sort of what his band will be doing, too.

Nickolai Preiss (vocals, guitar, multi-instrumentalist), Evan Hein (bass), and Miles Gretsky (drums) are The Imposters. Hein graduated from Mira Costa a year before Preiss in 2010, and Gretsky bore the cross of the rivalry as RUHS class of 2011, but they come from the same circle of talented musicians and friends who are capable of playing just about anything they wish. The Imposters are a Hermosa Beach-based punk band at heart, but that doesn’t prevent them getting down on ‘50s rock ‘n’ roll, jazz, psychedelia and so on.

The idea is to project an amalgamation of footage from defining surf and skate films while performing live, improvisational soundtracks to an audience who can hear, but not see, the band as they play within a dark room behind the serving window of the kitchen area at the Kiwanis Club in Hermosa Beach. Make it for all ages, from 8 to 80, and give local kids with nothing to do something fun and inspiring to look forward to every Monday throughout the summer (except July 23).

Preiss says, “What I’m trying to encourage is for the audience to find inspiration in the passion of these historic surfers and skaters, and do it their own way… show people what can be done on these boards, and just how each era found their own way to do it… It’s just a celebration of the things that made us who we are. You can’t find us anywhere else in the world and it’s deteriorating before my eyes…

“I’m trying to get the youth stoked and educated on our culture. Trying to get kids to ask for a skateboard for Christmas instead of an iPhone… I want little 10-year-old kids to leave saying, ‘Man, why can’t I do something on a skateboard that people in 2050 watch in a film and say, ‘Why can’t I do this?’’”

The events won’t be limited to just the old school, but will feature in semi-chronological order, most eras of surfing and skating up to the present. Each session will be totally different and the live music can likewise be expected to range in its nature. Based on the vibe of each night’s collected footage, The Imposters may find themselves cooking up folk, rock ‘n’ roll, psych, jazz, blues, reggae roots, or who knows what.

Preiss says, “What it boils down to is a skimming of the surface of each era of our culture. We’re definitely gonna do it to match the vibe of the era. We’re not just gonna noodle around with our natural sound every show and just hope people get along with it, we’re gonna try and follow the direction and pace of the films and see what comes naturally through us, through our own inspiration.”

“It’s gonna be raw. All of it’s improvisational; whether you’re surfing, skating or playing music, you’re pretty much just letting yourself… your imagination run wild… you’re just creating things out of your pure nature. And that’s pretty much what the whole event is… a stream of passion.” 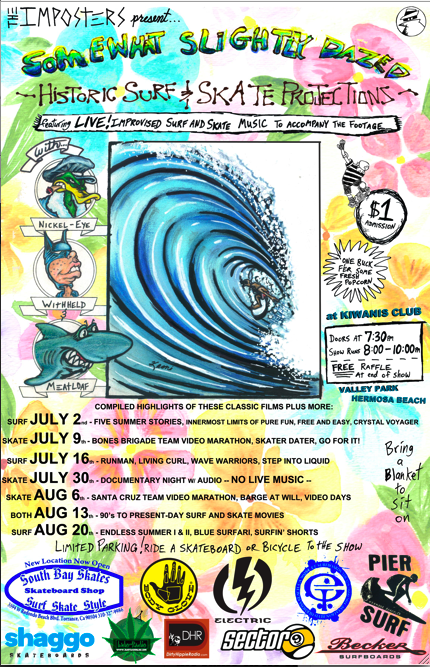 The Imposters present… Somewhat Slightly Dazed: Historic Surf and Skate Projections every Monday, beginning July 2 and ending Aug. 20 (except July 23) at the Kiwanis Club in Hermosa Beach, located at 2515 Valley Drive, where the band will be performing live, improvisational soundtracks to the film footage being shown. The all-ages events start at 8 p.m. and doors open at 7:30 p.m. The entrance fee is $1, which includes a raffle ticket. Sponsors include Pier Surf, South Bay Skates, E.T. Surf, Becker Surfboards, Shaggo Skateboards, Electric Sunglasses, Sector 9, Body Glove and many more. Preiss suggests bringing a chair, blanket or beach towel, as the venue is a big, empty room. He also suggests riding a bike, skating or walking the green belt, since parking is limited. ER