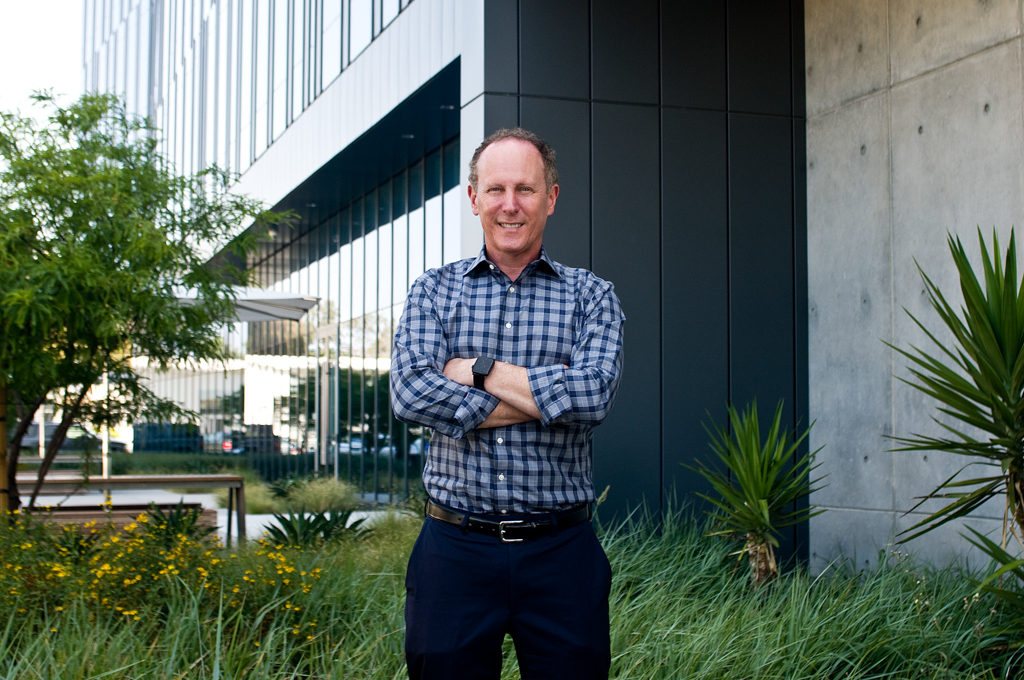 Dr. Eric Daar, of Rancho Palos Verdes, outside the Lundquist Institute, where he and colleagues are conducting clinical trials on a promising vaccine and on treatments for COVID-19. Photo by David Fairchild (DavidFairchildStudio.com)

Dr. Eric Daar has researched HIV and AIDS for nearly three decades. Daar is Chief of HIV Medicine at the Harbor UCLA Medical Center, a professor at UCLA’s Geffen School of Medicine and a researcher at The Lundquist Institute (formerly LA BioMed).

In a 2012 Peninsula magazine interview, Daar traced his interest in HIV/AIDS research to his student years at Georgetown Medical School in the early 1980s, when the first cases were reported in the United States.

“It was interesting to be involved at the very earliest stages of something that was clearly to become really big. We were dealing with this life-changing diagnosis and early death. I also think I was attracted to it because it involved people who were my peers,” he said.

On March 21 of this year, two days after California Governor Gavin Newsom issued his Shelter  At Home order to deter the spread of the coronavirus, Daar was called on to fight his second pandemic, one that again targeted his generation.

“That day,” the Rancho Palos Verdes father of four grown children said in a recent interview, “I received an email from the National Institute of Health. NIH needed people with expertise in conducting large clinical trials and it needed research sites to deploy those trials.”

Daar is a member of a long established, international AIDS clinical trial group.

“The country didn’t have a lot of researchers looking at coronaviruses before the pandemic. So those of us who had experience with other viral diseases were asked to take on this new challenge.”

Frequently, and unavoidably, since receiving that email, Daar has thought about the similarities and differences between the two pandemics. One important difference, he said, is scale.

“In the early days of HIV research, everyone we met was going to die. There was nothing we could do about it. It was a pretty intense reality.

“There was a desperation to do something, but we didn’t have any tools. Which is where we were at the start of the COVID-19 pandemic. We had very few medical tools to treat the symptoms and stop the deaths.”

“Unlike early on with AIDS, not everyone with COVID-19 is dying. But the number who are dying is enormous. ‘Everyone’ with AIDS was a subset of the population, not the entire population of the world. I can’t even guestimate how many years it took to lose 120,000 people in the U.S. to AIDS. This happened with COVID-19 in a matter of months.” (According to the Center for Disease Control, 59,000 AIDS-related deaths were reported in the U.S. between 1981 and 1989).

A more hopeful difference between the two pandemics, Daar said, relates to the development of medical treatments.

“I was always optimistic with HIV that we’d get there some time, but it took 15 years to develop very effective treatments. In contrast, we are already seeing advances in the treatments of those with severe symptoms of COVID-19,” he said.

Pandemic politics, another factor common to HIV/AIDS research and COVID-19 research, has been a particular concern of Daar’s in recent months.

The first NIH grant Daar’s group received was to study hydroxychloroquine, taken in combination with azithromycin. Hydroxychloroquine is the drug President Donald Trump promoted as a COVID-19 preventative medication and which the President took.

“I’ve been around a long time and I’ve never seen anything like the backlash we encountered when we started research on hydroxychloroquine,” Daar said.

“People criticized Reagan for being slow to support AIDS research. And there were people who opposed AIDS research because they opposed the gay lifestyle. But this was different. This was opposition to the study of a drug. And not even a new or very important drug,” he said.

Daar said the decision to study hydroxychloroquine was based on expediency, not presidential politics.

“During a pandemic, it’s all about using existing resources and expertise to roll out treatment in as short an order as possible,” Daar said..

“The first thing people do is look at what drugs are on the shelf, because those are drugs that we can move forward with almost immediately.”

“That’s the reason we look at what’s on the shelf. Because there is an urgency. People are dying now,” he said.

“Hydroxychloroquine is available for people with lupus, rheumatoid arthritis, and malaria. So we knew we could put it into humans.

“Its relevance to COVID-19 is that it is able to block the entry of microorganisms into that part of cells where the virus reproduces,” Daar said. “Azithromycin is a broad-spectrum antibiotic, commonly sold as Z-pak. It may be useful to prevent bacterial complications arising from the viral infection,” he said.

The NIH study was to involve 2,000 enrollees, at over two dozen clinical labs across the country. The enrollees were to be those with mild symptoms of COVID-19 who were not in need of hospitalization. Approximately 15 percent of COVID-19 patients require hospitalization.

“Could we reduce that 15 percent to 10 percent and prevent those people from possibly dying? That was the first question we wanted to answer,” Daar said.

A second goal was to determine if the drug combination hastened recovery.

A third goal was to involve 10 percent of the enrollees, who would be given blood tests and nose swabs to measure their viral “load.”

“We don’t know if we need large clinical studies to look for real hard endpoints [successes], like reduced admissions to the hospital and fewer deaths.

“It’d be nice, if rather than having to enroll 2,000 people and follow them for four weeks, if we could enroll say 50 people and just look at what happens to the virus in their noses to know if the trial drug makes the virus go down.

“It’s not an efficient way to test new drugs, to always have to enroll 2,000 people. What we’d love to do is develop a so-called surrogate marker. In the world of HIV, we validate whether drugs work by looking at the amount of virus in the patient’s blood. We can do that in a matter of weeks, but only because we were able to demonstrate many years ago that a change in virus in the blood translated into clinical improvements.”

Daar and fellow researchers began interviewing patients for the hydroxychloroquine trial shortly after receiving the NIH grant in March. But by June, only 20 of the 2,000 people with COVID-19 needed for the study had been enrolled. Because of the low enrollment, Daar and his approximately 15-member team ended the trial.

“We weren’t doing the study to prove the President right or wrong. We were just trying to answer the question. No one had data about it.”

“There was no [internal] politics whatsoever about starting the study or ending it. Ending it was heartbreaking because we had spent so much time and energy on it and were hoping it might help people. But it was just impossible to proceed without the number of enrollees needed to get scientific answers,” he said.

Speaking for his team, Daar said, “We want people to know we will continue pursuing other strategies.”

“The study team has moved forward as part of Operation Warp Speed, the U.S. government response to the COVID-19 pandemic,” Daar said. “The team will be studying multiple, promising new agents in the same study population — those with mild disease — to see if we can establish treatments that will reduce risk for hospitalization and death. The first of what will likely be many new drugs to be tested will roll out into clinical trials sites across the country, including at the Lundquist Institute in the coming weeks.

Another major effort, he said, which is also part of Operation Warp Speed, will be the first large U.S. COVID-19 vaccine trials. The first trial is scheduled to start this month and the next is projected to start the following month.

“Just this week,” he said, “data from early trials with this vaccine demonstrated promise with reasonable tolerability and induction of strong antibody responses. The large trials to be initiated will ultimately test how safe it is and whether it reduces the risk of people developing symptomatic disease with COVID-19.”

Another important area of research for COVID-19 involves giving infected people antibodies from individuals who have recovered from the disease. This “convalescent plasma therapy” is being used at sites across the country.

Daar’s group at the Lundquist Institute is working with the NIH on a variation of this therapy. They are collecting plasma from multiple people who have recovered from the disease so it can then be processed for the isolation of high levels of antibodies thought to be effective against the virus that causes COVID-19. These antibody preparations will be tested for both prevention and treatment of the infection. The group is looking for people who have recovered from COVID-19 who would be interested in becoming donors for this research effort.

Daar said this approach differs from “active immunity” vaccines, which stimulate the patient’s own antibodies to fight a disease.

“The hope is if we can give patients an enriched cocktail of antibodies, those antibodies will fight the disease, rather than for patients having to wait to develop their own antibodies.”

The next big question

“One of the problems at the beginning, why things were going out of control, is we had no way of measuring the number of cases. Now we’re doing much more testing, maybe not quite enough, but much more.

The next big question is whether we’ll see a resurgence of the disease in the fall, like we do with many respiratory infections, including influenza.”

He urged people not to become complacent about the pandemic.

Despite his optimism about developing a vaccine, he noted, “We’ve never developed a vaccine for a coronavirus,

“Even if we’re fortunate enough to find a safe, effective vaccine, we don’t know if it will be 100 percent effective,” Daar said. “We have a flu vaccine that comes out every year. But it is never 100 percent effective. So we may need both the vaccine and treatment to minimize the morbidity rate.”

Daar’s workdays begin at home at 3 a.m with a break to exercise before heading to the Lundquist Institute where he does research and Harbor UCLA Medical Center where he provides patient care. He doesn’t stop for breakfast or lunch. He returns home about 7 p.m, eats dinner, reviews emails and is in bed by 10 p.m. He has not had a day off since he received the March 21 email from the National Health Institute.

“It’s an exciting time to do infectious disease work. It’s scary and it’s all hands on deck,” he said. ER