The miracle of Dominique’s Kitchen, newly opened in Redondo Beach 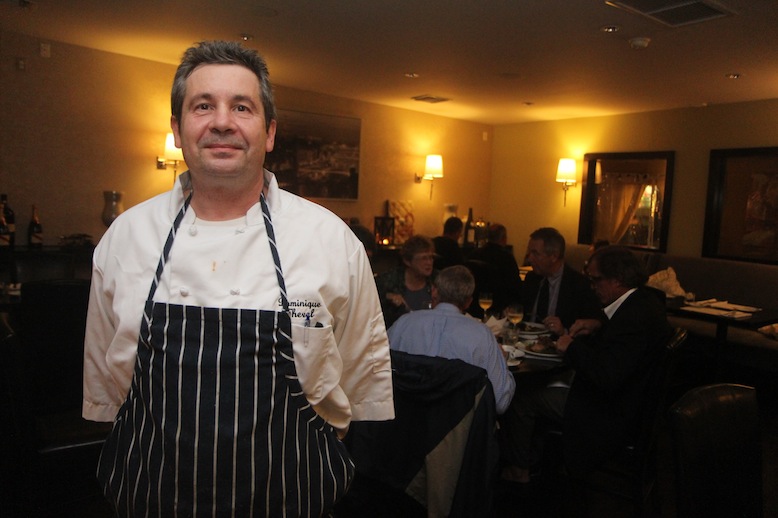 Chef Dominique Theval, a veteran of restaurants in Paris, London, Bermuda, and Cambodia, makes a statement in Redondo 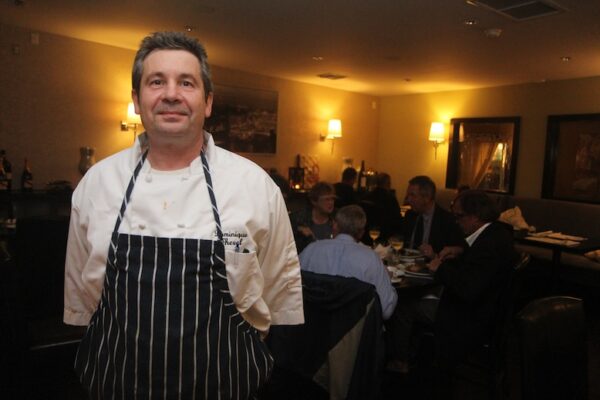 It is often said of car engines, the human eye, and the internet that that it is miraculous that they not only work well, but that they work at all. So many things have to go right, so many systems interact, but they do so with such consistency that the miracle has become commonplace.

To this list one should add fine restaurants – not the ones using frozen ingredients, because those are just assembly lines, but the ones where fresh ingredients are deployed to create fine meals. So much has to happen on schedule, in an environment where the owners have to make so many guesses about the tastes of their clientele and hope they’re right, that it is indeed amazing when it all works out. When a place not only gets it all right, but operates like a well-oiled machine from the earliest days in business, it is the rarest of prodigies.

Enter Dominique’s Kitchen, Redondo’s newest fine dining restaurant, which has pulled off the trick of serving astonishingly accomplished food with flawless service, and is doing it at a surprisingly moderate prices. The restaurant is owned by Chef Dominique Theval, a veteran of restaurants in Paris, London, Bermuda, and Cambodia. He also cooked at Frere Taix, the oldest French restaurant in Los Angeles. This is Theval’s first restaurant as an owner, but you wouldn’t know it. Everything runs as smoothly as a place that has been in business for decades.

The former Oh La La Bistro space hasn’t changed much inside – more comfortable furniture and a slight revamp of the décor – but the menu has drastically changed. Dominique’s offers a much wider selection, and the most expensive items on the new menu are the same price as the least expensive on the previous restaurant’s. One can order items such as roasted chicken with frites, a risotto, or pan-fried sole fillet and not top $15. The appetizers range from $4 to $10, which is astonishing for French cuisine crafted by a celebrated chef.

We decided to start our meal with chicken liver pate, spicy lamb sausage over a quinoa salad, and a cup of the soup made from pureed spinach, celery, and broccoli. I don’t remember tasting a soup quite like that one before. The spinach and broccoli richness was there, but the celery came through as at least an equal partner. Everyone at the table admired the blend of flavors, a simple but unique idea very well realized.

The chicken liver pate was soft and creamy, tasting richly of liver, not the milder meatloaf-like pork or duck based pates that are usually served. While I happen to like the pork pate better, this one was very good, a large bowl of spreadable unctuous goodness served alongside greens, olives, pickles, and slices of toasted garlic bread. The portion was ample, and it would have been a generous starter for two people.

The spicy lamb sausage was served on a bed of quinoa cooked like a North African couscous, the grains simmered with raisins, mint, almond, lemon, and honey. Quinoa has a fluffier texture than most couscous and a similar mild nutty flavor, so the result is a traditional dish that fits modern ideas about health and lightness. The spicy sausage matched the fruit and nuts elegantly, and if Chef Dominique wants to explore French-Algerian flavors in the future he has my full attention.

Our server recommended a 2010 Ravenswood “Zen of Zin” to pair with the sausage and couscous. It was an inspired choice at the moderate price of $8 per glass. The wine menu here seems to be designed to prove that you can pair your food well without going into the poorhouse. All glasses are below $9 and most bottles are below $30. The Zen of Zin was so good that we were on the internet between courses checking where we could buy it – a breach of table manners — but we couldn’t resist. The Man & Jerry Pinot Grigio paired well with the soup but disappeared with the other dishes, and the Justin Sauvignon Blanc worked well with everything, as expected with the soup and sausage, but surprisingly given the fatty consistency of the pate.

For dinner we selected linguini with smoked salmon and peas in a parmesan cream sauce, braised short ribs in wine sauce, and sea scallops in a lobster reduction with mashed potatoes and shallots. All were good, but I thought the scallops to be the best of the meal. The six big, meaty pieces of shellfish had been pan-seared to get a nice coating and arranged on a bed of lobster sauce around a column of mashed potatoes topped with mache greens. The balance was exceptional, and there were many flavors on that plate that all worked in harmony.

The pasta with peas and smoked salmon was a simple dish that kept the focus on quality ingredients. The smoky, flavorful fish and peas were in a fresh cream sauce with a hint of garlic and the right amount of freshly grated cheese to complement but not overwhelm. Here the Pinot Grigio came into its own. It was a wine with good manners that played well with the delicate flavors.

The short ribs had been slow-braised in Pinot Noir with tomato, onion, garlic, and vegetables, and was served with creamy mashed potatoes. This traditional dish is called a daube and resembles an Irish stew with much more liberal use of herbs, the broth infused with thyme and rosemary to create sophisticated comfort food. It paired wonderfully with the Zen of Zin.

We finished with desserts, the only part of the menu that seemed slightly out of balance. Four items are offered: a confection of meringue and crème anglaise called a floating island, a dark chocolate mousse, a caramelized lemon tart, and a passion fruit crème brulee. Floating Island is often extremely sweet, so we ordered the other three, but we might have preferred the option of a simple fruit tart, flaky pastry, or gateau. The lemon tart was best, a tangy pudding on a biscuit crust, and the other two items were both decent, but they didn’t quite have the character of the starters or main courses.

Dinner at Dominique’s Kitchen is an affordable indulgence. Our meals were about $50 apiece with starters, desserts, and two glasses of wine, each. For cooking of this caliber with attentive and knowledgeable service, that’s a steal. This is the most exciting opening of the year.