“The Olive Trees of Justice” – A sparse crop [MOVIE REVIEW] 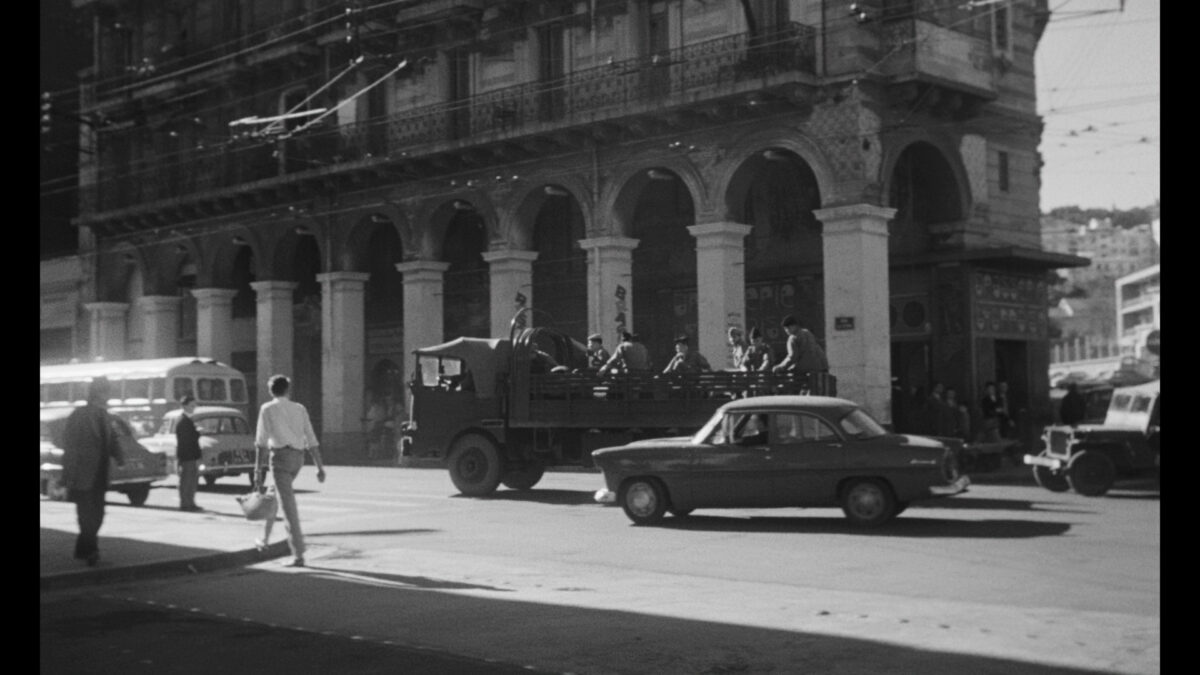 Pierre Prothon as Jean walking the streets of Algiers in "The Olive Trees of Justice." Photo courtesy of Kino Lorber. 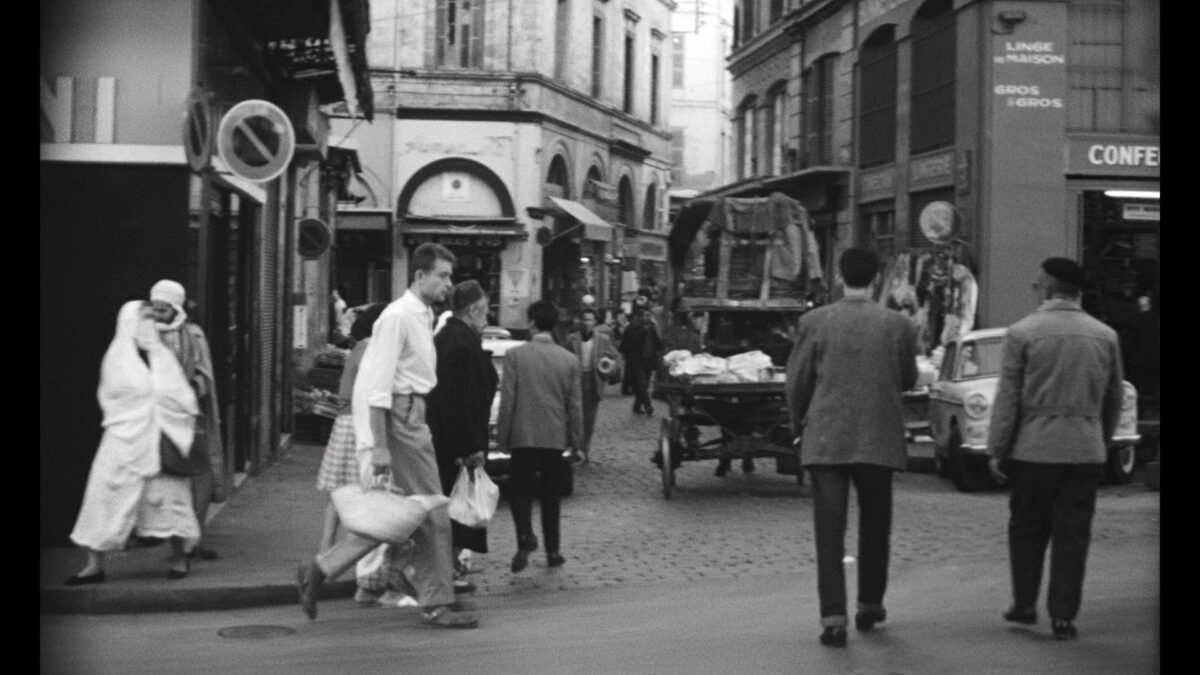 Pierre Prothon as Jean walking the streets of Algiers in “The Olive Trees of Justice.” Photo courtesy of Kino Lorber.

It’s 1961 and Jean has returned to the Algeria of his birth to visit his dying father. The war against the French is still raging and the schism between the native population and the colonialist occupiers has grown even more intense. Jean, who grew up on the family farm in the Mitidja plain outside Algiers surrounded by vineyards and fruit trees, is as shocked by his parents’ diminished circumstances as he is by the tanks on the streets and the helicopters in the air. The war has been going on for 8 years and one can hear the death rattle of the French army as their grasp over this colony is at an end.

Jean’s entire adult life has been in Paris with his wife and children; he was eager to leave Algeria behind. His father, a bad businessman, lost the farm in a series of bad investments. His wife and sister insist that it was because he was too kind to his workers and listened to the wrong people. But even on his deathbed, Jean’s father refuses to blame others. He was the very embodiment of noblesse oblige to his former field hands.

James Blue, the director, uses a very cinema verité style as the camera follows Jean in the streets shopping for his parents. His blank features and detached demeanor as he navigates the streets teeming with armed soldiers, beggars, children, shoppers and merchants is reminiscent of the disconnected protagonist of Camus’ Existentialist novel, The Stranger. Jean sees nothing that relates to the Algeria of his youth. His best friend Saïd, he soon learns, is a member of the revolutionary forces hiding in the mountains; his other, Boralfa, works for Jean’s mother as a servant. “Do you know why we rebel?” he says to Jean. “We have no country.” 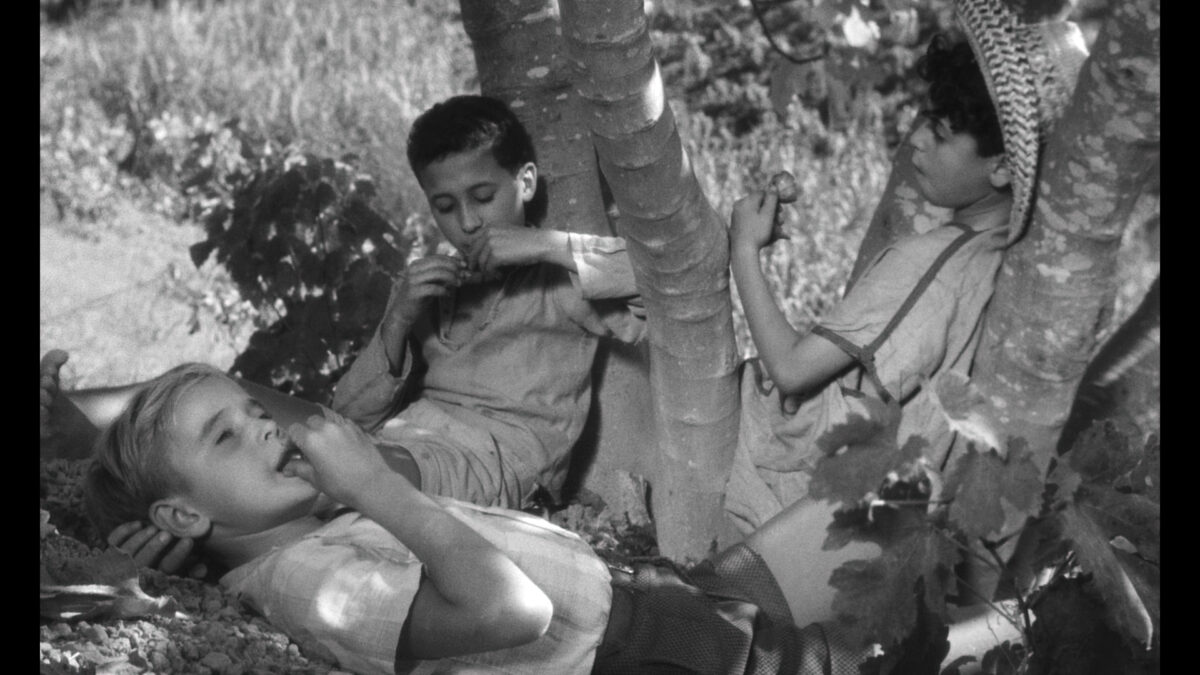 The children portraying Jean, Saïd, and Boralfa in earlier times in “The Olive Trees of Justice.” Photo courtesy of Kino Lorber.

The lives of the three have diverged dramatically since they were children playing in the fields. Flashbacks of the so-called idyllic past reveal that all was not as egalitarian as Jean has remembered. There was and always would be a divide. Although the adult Jean expresses sadness over what has become of his country, his statement “The country must be for everyone, or else there’s no country,” overlooks the fact that it never was. His walk through the back streets of Algiers should have triggered something more within him.

Blue has used the decline of Jean’s father, his loss of the farm and the grapes he nurtured as a metaphor for France losing Algeria and not acknowledging its paternalistic approach. As the father points out, before the war everyone knew their place. Representing the French colonial attitude is Jean’s Aunt Louise, a hard-nosed farmer who believes that native rebels should have been dealt with even more harshly than they had. She stubbornly holds on to the idea that this land is as much hers as theirs. She complains, “Now I’m treated like a foreigner in my own country.” But whose was it before her or Jean’s family? The French were not invited guests and they have stayed too long at the party. Many questions are raised in this film; the responses have been answered by history.

The acting, primarily by non-professionals with the exception of Jean Pélégri who played Jean’s father, is exceptional.

A respected director of documentaries, “The Olive Trees of Justice” was James Blue’s only narrative feature. He would later be nominated for an Academy Award for his documentary “A Few Notes on Our Food Problem” in 1968. Co-written by Blue and Jean Pélégri, it was adapted from Pélégri’s semi-autobiographical novel. The cinematographer Julius Rascheff created a realism that is uncomfortable. One scene in particular comes to mind as Jean visits the mother of his friend Saïd. Sitting on the floor of her hovel, the flies hover everywhere, alighting on both Jean and Fatima in the steamy, befouled atmosphere filmed so realistically by Rascheff that you are inclined to bat away the bugs.

Remarkably, this movie was filmed on the streets of Algiers as the war was raging. The filmmakers obtained the necessary permits under the pretext that they were filming a documentary about the wine industry in Algeria. It was the only fiction feature made in Algeria throughout the war that raged from 1954 until 1962. A controversial film at the time, it was awarded the first ever Critics Prize at the Cannes Film Festival in 1962. It is only now receiving a release in the U.S with its 4K digital restoration.

In French and Arabic with English subtitles.

Streaming from January 22-February 3 on the Metrograph website. to find tickets.