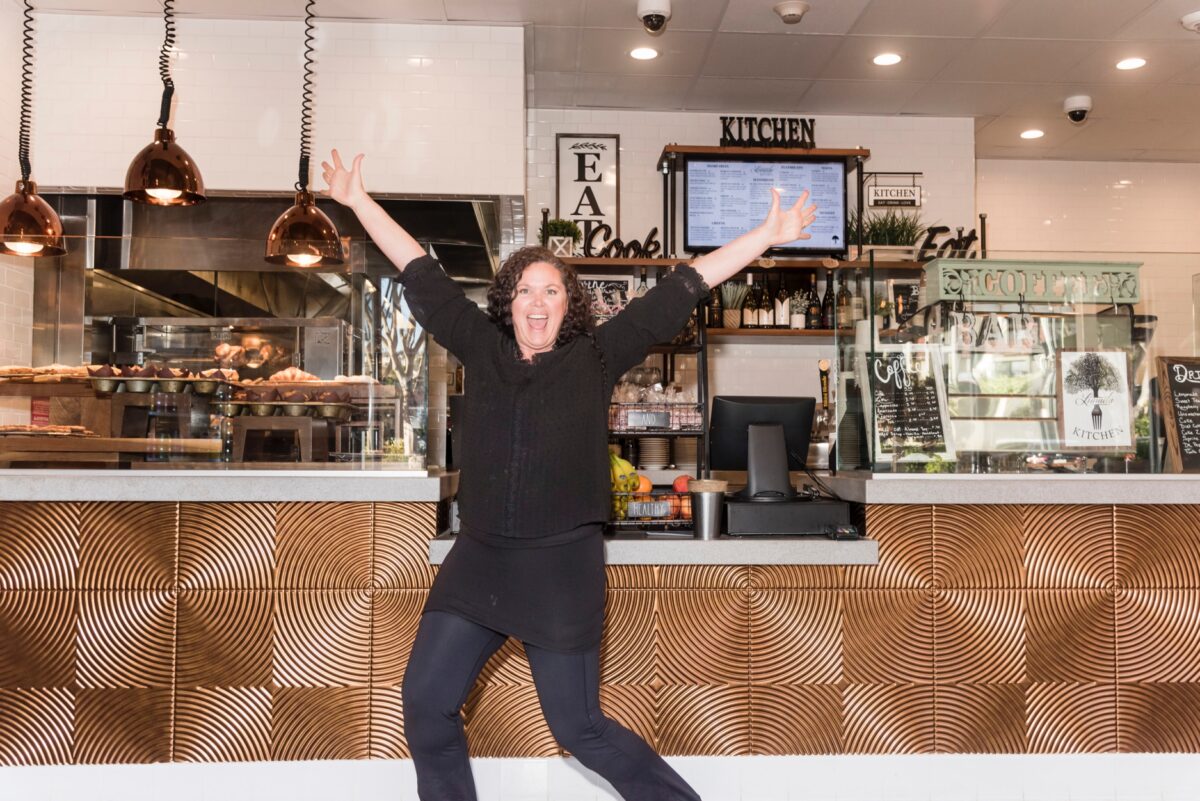 When I heard Lunada Market was launching a restaurant, I had some assumptions about what they’d serve. The place already had a deli with a salad case and a full produce section, so it would be easy to make a menu of cold cut sandwiches, throw together some cheese and charcuterie trays, maybe offer guac and chips, and call it a cafe. It would take no particular ingenuity and use stuff they had on hand, so would be a great business decision.

I got the part about the guacamole and chips right, but there isn’t a ham and cheese sandwich, or salami and pickle tray to be seen. They have a full kitchen and they’re using it, serving flatbreads with house-made dough, Argentine-style beef skewers, and meals from burgers to steaks and chicken.

As soon as I saw the menu, I planned a visit, but on arrival there was a slight problem: finding it. I wandered through the market looking for the door to the restaurant and there was none, though it wasn’t a wasted trip because I did get some Camembert cheese and bread for the house. At the checkout counter I asked where the restaurant was, and found that it’s on the opposite side of the building, past the little coffee shop that is under a different ownership. I suggested that the management might want to post a sign, and the clerk said it wasn’t the first time they heard that.

Lunada Kitchen only has patio seating. You order at an indoor counter that is enlivened with a collection of framed mirrors that reflect a pastry case full of breakfast items. The staff are enthusiasts for their food – they know the menu and seem to enjoy it when customers have questions. We ordered hummus, onion rings, and a pizza to start and four entrees, then went out to the patio to grab a table. The space is functional, with metal chairs and sturdy wood-topped tables and only some plants for decor, so there’s room for improvement when it comes to making it look welcoming. The place is new, so they may have plans in that regard. It is heated and screened from ocean breezes by the building, so it’s comfortable. 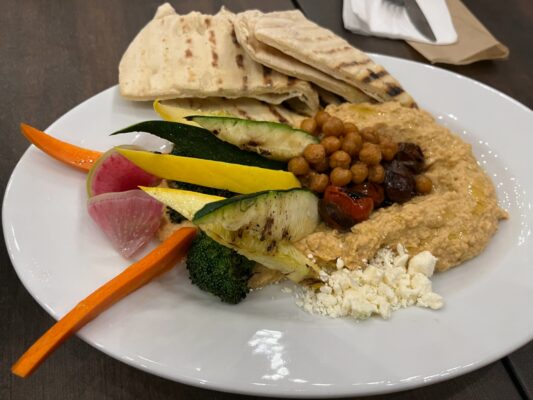 The hummus arrived first, and the presentation was greeted with astonishment. Hummus isn’t generally a pretty dish, a brown paste with a pool of greenish olive oil, and perhaps some vivid red sumac powder on top. Here the hummus is almost lost in a plate of artfully arranged raw, pickled, and grilled vegetables, with crisped fried garbanzos and grilled olives alongside crumbled feta cheese and house-made pita. It’s easily the most varied and beautiful hummus plate I’ve ever seen, and would be a centerpiece on any party buffet. There is a variety of flavor pairings between veggies and hummus, and it’s a must-have starter. I say that despite the fact that it’s not the style of hummus I usually prefer, as it’s light on the garlic, and cumin, and less creamy than most traditional versions. It works great in this context, and that’s what matters.

The pizza arrived as we were polishing off the last dabs of hummus, and was a hit, too. The very light, risen crust had the “leopard spots” that Italians see as the mark of a proper bake, and it was topped with Alfredo sauce, ricotta, and parmesan, and sprinkled with herbs. The flavors were in harmony, and it was the traditional item perfectly done. The onion rings were good too, though I’d prefer the onions cut thinner. Thick-cut onion rings are less crisp, and it’s more likely that the whole piece of onion will come out in the first nibble, leaving a hollow tube of batter for subsequent bites.

The Lunada Kitchen offers some very good wines at grocery store prices rather than restaurant prices, which translates as about a one-third savings on a bottle. We chose a Prescription Chardonnay, which we found to be aromatic and slightly oaky, versatile enough to complement all but the hearty red meat entrees. The Quilt Napa Cabernet Sauvignon was available by the glass and served nicely for that purpose. 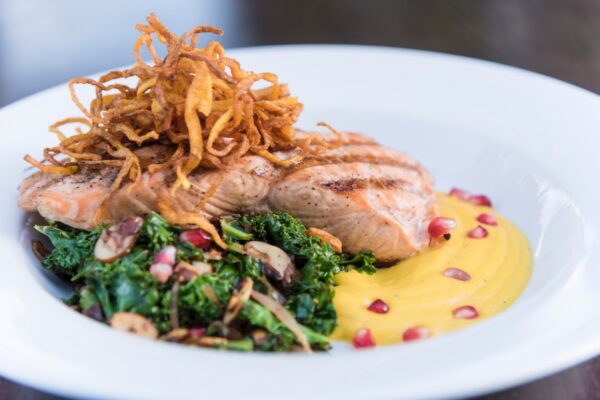 One of the popular entrees is the roasted salmon with butternut squash puree, pomegranate kernels, sautéed kale with shallots and lemon, and crisped onions. Photo by Tony La Bruno

Our entrees were fish tacos, steak frites, fried chicken, and a salmon burger, the last being a house-made patty of salmon and seasonings that was treated exactly as though it was a hamburger. I wasn’t sure how well the traditional accompaniments of aged cheddar, caramelized onions, purple cabbage, arugula, pickled onions, and creamy aioli were going to work with that protein, and if I ordered this again, I’d leave off the cheddar. There were enough rich and soft things going on in that sandwich that it wasn’t really needed, though my wife who had ordered it begged to differ. The sandwich was of heroic size and served with crisp Belgian-style fries, and she amazed me by clearing the plate.

Similar fries were on the side of my steak as well, but I wasn’t able to finish all of them. The portions here are ample, and I took home some of the steak and bearnaise sauce because we had over-ordered on appetizers. The steak was a fine piece of meat properly grilled, and arrived with a large and varied green salad that also went home so I’d have room for dessert. We were a bit less impressed with the fish tacos, despite the fact that the fish was nicely crisp-fried in tempura batter (you can get it grilled if you prefer). The problem was the mango salsa and chipotle aioli were in such liberal portions that they crowded out the fish flavor, and made it difficult to eat neatly. I’d suggest ordering both on the side so you can add them to taste. The tacos came with a purple cabbage and cilantro salad that I think I might have preferred actually inside the taco, and I may make that experiment on a return visit.

The star of the meal was the fried chicken, which was prepared sous vide style, and then batter-dipped and fried. This allows fresh-fried chicken without the usual wait of at least half an hour, and creates a wonderfully moist interior and crunchy exterior. The batter was seasoned with herbs and the barest hint of red pepper, just enough so you weren’t sure it was there. The half-bird wasn’t particularly large but with the mashed potatoes and gravy and a half corn on the cob was a fantastic meal. All of us around the table have ties to Maryland and Virginia, and this was the kind of meal our mothers made when they were having a great day in the kitchen.

As full as we were, we had to try dessert, we split an apple crumble. It had a nice cinnamon flavor, and was not over-sweetened, so you really tasted the apples, and it was served with good quality ice cream. It was a simple, wholesome finish to a very fine meal.

Lunada Kitchen has modest prices for the quality, with most main items from $19 to $30. The $36 steak is the most expensive item on the menu. The food and service were far above our expectations. The manager mentioned that over time they plan to expand the menu, and days of operation. I can hardly wait to see what they do next.