There are only three tables and a counter at Fatta a Mano, and they like it that way 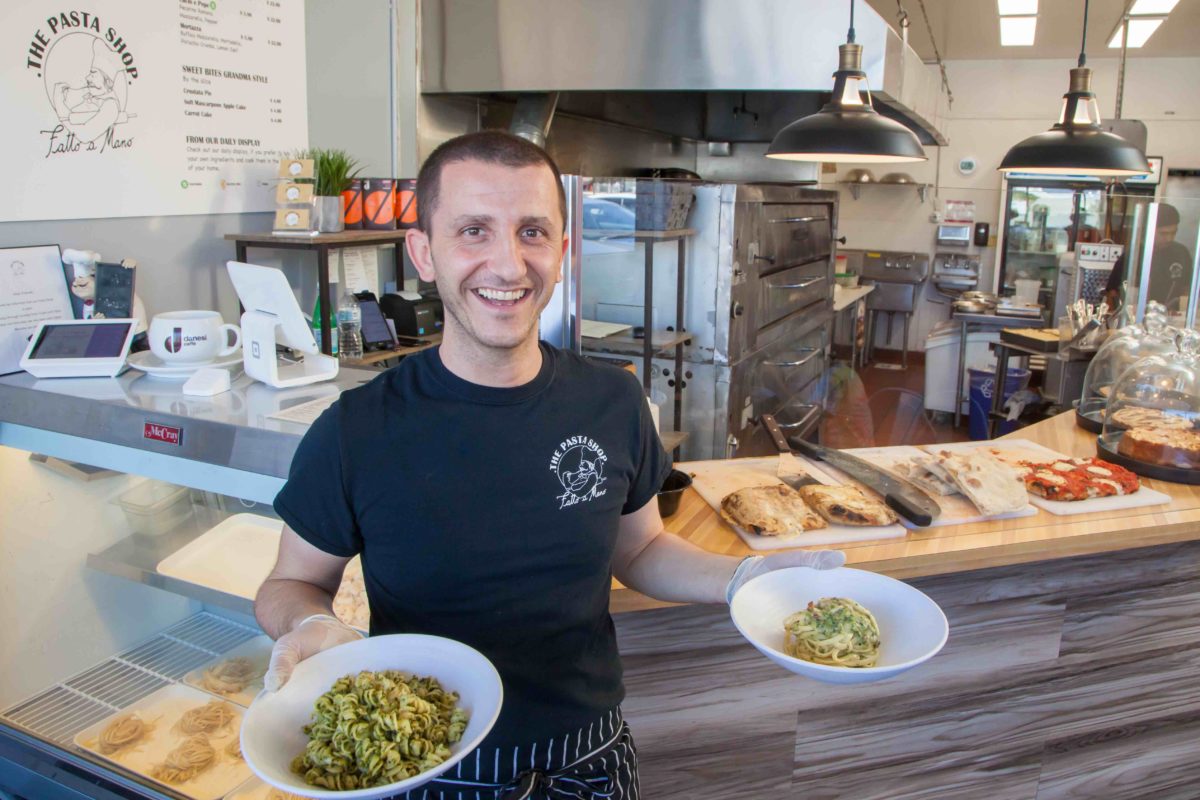 One of the most desirable restaurant tables in Redondo can’t be booked online and it’s entirely free of fancy cutlery, fine china, or even a tablecloth. It’s one of three at Fatto a Mano, a restaurant that can seat a maximum of 10 people. At peak times there’s a wait of over an hour, and since there’s no space to stand around inside, customers hang out on the sidewalk or browse in a nearby liquor store. They won’t be drinking anything they buy at the restaurant, which serves only coffee or soft drinks and doesn’t allow outside bottles.

The food that has inspired such adoration isn’t fancy. Owner Marco Pacelli says it’s “cucina povera,” the cooking of impoverished people in a difficult era.

“After the second world war most Italians were poor, and they found the best ways to use the few things they had. It’s a challenge, because it’s a cuisine of few ingredients, and they all have to be good for the dish to taste good. That’s the curse and the blessing of doing this kind of food.”

The centerpiece of most meals is pasta that you can see being made to order – the name of the restaurant means “made by hand.” Pacelli was born in the metropolis of Milan but cites his grandmother’s village of Ravello on the Amalfi Coast as the principal influence in his cooking. Or perhaps it’s his grandmother’s devotion to making things in the style of the region where they were invented.

“My cooking embraces authenticity and tradition, my lasagna Bolognese is how they make it in Bologna. We make it with Bechamel sauce while most people here use ricotta cheese, and we make it with guanciale, the pork jowl, along with the beef. The spaghetti with tomato the way that I do it is definitely from the Amalfi Coast. The tradition for that dish is to use skinless San Marzano tomatoes and you cook it super slowly.”

I haven’t tried the spaghetti with tomato, but the Bolognese has the authentic flavor, silky and rich from the cured pork jowl that has melded with the beef and other flavors. Guanciale is similar to bacon, fatty pork slow cured with salt and pepper and the lightest dusting of herbs Something about the way the fat melts into dishes makes them amazing. The portions at Fatto a Mano are Italian sized rather than American, typically about five ounces of pasta to an entree, but by the time you’ve finished, your appetite is satisfied.

Guanciale is also offered in a sauce with zucchini and mint, which I haven’t tried yet – there are so many interesting things here. I have tried a spicy spaghetti with anchovies, garlic, and oil and a pair of house specialties that are among the simplest but most revered in Italian cuisine: carbonara sauce and cacio e pepe, pasta with nothing but butter, pepper, and cheese. The carbonara is made in the real Italian style, with the sauce of olive oil, pepper, and pancetta tossed with the hot pasta and then a raw egg and the cheese mixed in at the last moment. When made this way the egg is cooked by the heat of the pasta, and it’s luxuriously rich.

Diners who want to taste the food without braving the line might try to order that dish to go, but they won’t get it because Pacelli won’t sell it.

“We don’t make certain items to go, because the customer isn’t going to be happy. The cacio e pepe or carbonara are very sensitive to temperature, and they don’t reheat well. The eggs are fresh eggs, and if you reheat carbonara it’s going to be scrambled egg pasta. They aren’t anything like when we serve them here, so I made the decision that we will serve everything else to go, but those are just for here. Take out, in my opinion, works well within a three-mile radius. If you live further than that, come and eat here. Any food made with natural ingredients that sits 20 or 30 minutes in the box, it will not taste the same.”

The pastas are the centerpiece of most meals here, they have the distinct springy texture that you only get from fresh noodles. But they’re not the only attraction. The salads are sized to be a meal for one or a starter for two, and at Marco’s suggestion, I tried the pear and spinach with walnuts and balsamic dressing. (I should mention that getting Marco to make suggestions is far from difficult, because he loves to talk to his customers – it’s that mom and pop attitude. This can be mildly aggravating if you’re in line and he’s having an animated conversation with the person at the front, but it’s okay because you’re going to get personal service when it’s your turn.) 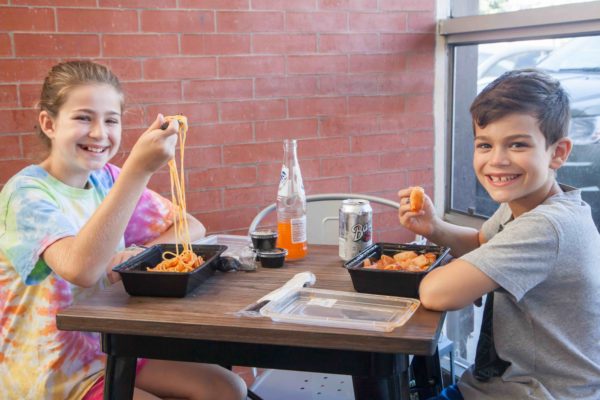 Sasha & Max Skylar are all smiles and pasta.

Marco also might suggest you try the pizza, and it’s decidedly different from most others in the area. Instead of a thin crust briefly cooked at searing temperature, as it’s made in Naples, the pizzas here are made in the Roman style. That means the dough is allowed to rise for 72 hours, which creates a high risen crust with big bubbles and a noticeable sourdough flavor. It’s crisp on the outside and soft within like a good sourdough, and it’s filling – one generous slice is a meal. On my first visit Marco recommended a combination I had never seen on a pizza, fresh mozzarella with mortadella, pistachio crumbs, and lemon zest. The flavor combination was remarkable.

Three desserts are offered, a crostata pie, mascarpone apple cake, and carrot cake. They also fit the style of the restaurant. They’re the kind of simple but wholesome desserts an Italian grandmother would make. The crostata is a lattice-top chocolate and nutella pie, and of the three it happens to be my favorite. But I’d have any of them with a shot of the house espresso to finish a dinner.

If you’d like something more relaxing than espresso that isn’t a sparkling water, you’re out of luck – this location doesn’t have an ABC license and can’t get one. You have the choice of getting your food to go or buying some fresh pasta and sauce and knocking it together yourself. Marco says that even if you’re not a wizard in the kitchen, you should be able to handle this task.

“It takes five minutes, I tell you how to do it, and even if you don’t have any culinary skill you can make it. Cook it for your partner and take all the credit, because it doesn’t taste like restaurant food, it tastes like home food.”

Marco Pacelli has worked in some large establishments – for a while he managed restaurants at Terranea, prior to that banquet operations at the Beverly Wilshire and a hotel in Dubai. But he obviously prefers this closet-sized space on Torrance Boulevard where he can interact with his clientele. His business is eccentric, eclectic, and wholly successful among people who appreciate his particular take on a traditional Italian cafe. Bring something to read in line, or a friend to talk with while you wait, and savor one of the South Bay’s tiny gems.