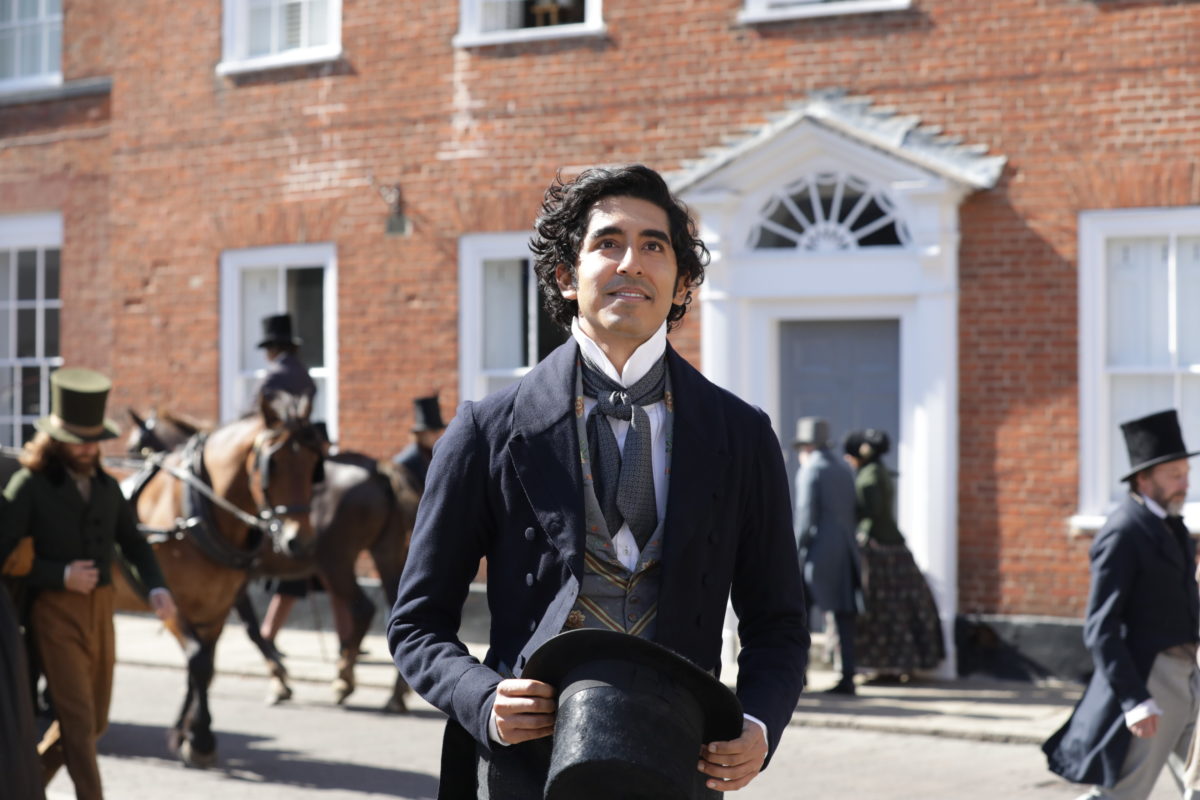 “The Personal History of David Copperfield,” Armando Iannucci’s marvelous take on this Dickens classic is gloriously revolutionary. I’ll be the first to admit that I have yet to read the book. I’ve read a number of his novels but the sheer length of this one has always put it into the category of “one of these days I must read this book.” Alas, even life in the age of quarantine has not yet induced me to crack open this 869 page book. (Iannucci’s copy apparently has only 634 pages but that type must be awfully small.) Like most people, I suspect, their knowledge of this work is either from “Classic Comics,” or one of the movie or mini-series versions. I confess to both.  Advance press, and some of Iannucci’s own comments, led me to believe that this was going to be a comic version of this classic. Comedy is often in short supply in Dickens, although he seeds his novels with, not exactly hilarity, comic moments. There was a feeling of dread in approaching this film.

Fear not! Iannucci, working with long time writer and collaborator Simon Blackwell has given us a glorious film in living, breathing color, with the emphasis on color. He has not neglected the sordid and sad aspects of England in the 19th Century with its debtor’s prisons, cruel inheritance laws, caning, forced labor, and rigid class structure that inhibits creativity and encourages abuse. More importantly he has found a character who triumphs over much of this adversity, never loses a hopeful outlook and finds a way to help others and himself even during terrible moments of darkness. When events start to look overly dire, Iannucci and Blackwell find the hope and humor in the moment.

But for those of you who may be unacquainted with the story… David Copperfield was born (“I am born” is actually the title of the first chapter) to an already widowed mother. Within a very few years she is courted and married to Mr. Murdstone, one of the true villains of the piece, who soon ships David off to London as fodder in a bottle factory. Under the guise of an apprenticeship, this was typical of the child labor abuse which Dickens sought to highlight. His lodging was to be with the Micawber family, a boisterous, disorganized and heavily indebted group who are soon after shipped off to debtor’s prison, but not before they engage a willing and wide-eyed young David in their schemes to avoid the bailiff. 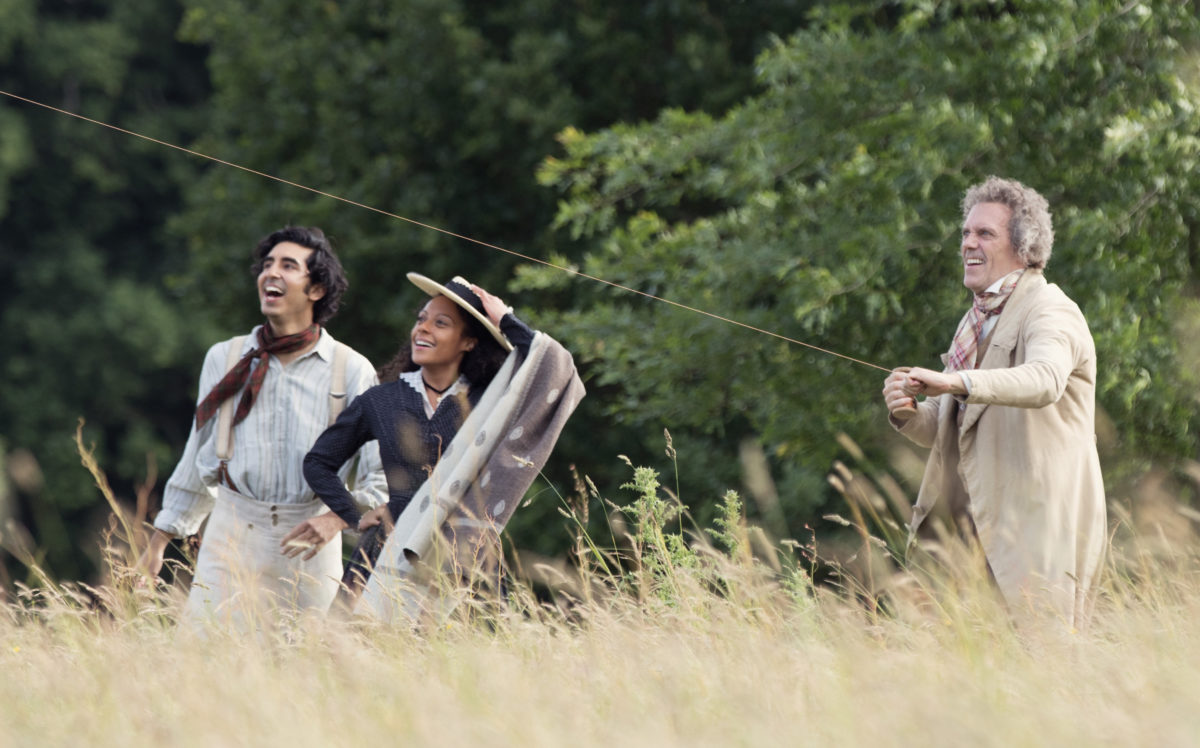 Eventually to the rescue of the much put-upon David is his Aunt Betsey Trotwood, the matriarch of a large estate in the country where she also cares for Mr. Dick, relationship unclear. Mr. Dick lives within the voices in his head where he believes he might be Charles I, about to have said head removed. David finds ways to alleviate Mr. Dick’s devils and help him find joy in his surroundings.

Advising and investing Aunt Betsey’s fortune is Mr. Wickfield who is a frequent visitor with his daughter Agnes. From the start, young Agnes has eyes for young David but that will have to wait.

Aunt Betsey sends David off to a boarding school where he encounters the sons of the wealthy. More than ever, he has no idea where he fits in. He disguises his origins in order to be accepted. It is here he encounters young Uriah Heep, he of the obsequious underclass constantly trying to ingratiate himself with the young gentlemen. 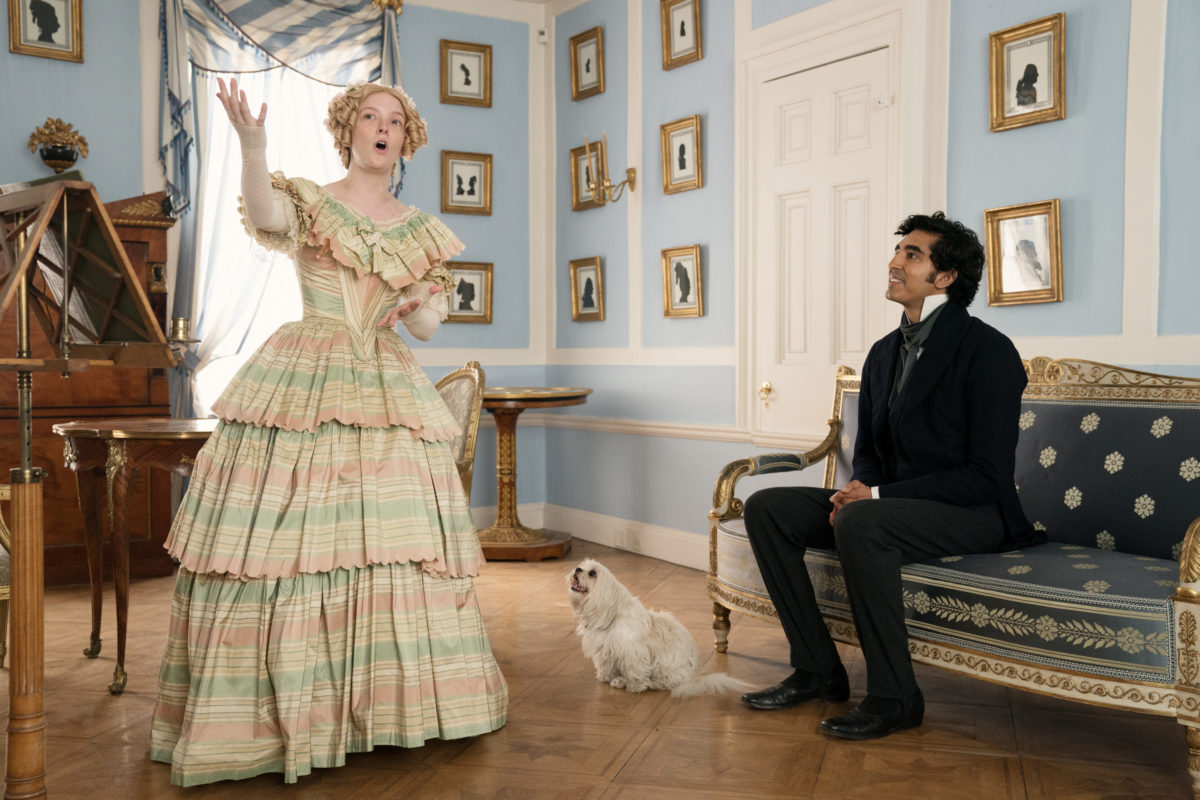 Fast forward (I don’t have 800 pages to tell this story) and young adult David has been taken on as an apprentice “proctor,” a position that is totally unknown to him but is explained as being some sort of lawyer (eventually). On an allowance from his aunt, and being paid a small sum, he lives it up in constant party mode and falls in love with the beautiful and entirely vacuous Dora, daughter of his mentor.

Alas comes word that his Aunt Betsey has lost all her investments, her estate, and all worldly goods. She and Mr. Dick are forced into a tenement in London by Mr. Wickfield’s new partner, Uriah Heep.

It’s not a spoiler alert to reveal that all’s well that ends well but Iannucci and Blackwell do it grandly with all the twists and turns favored by Dickens.

But let’s return to the concept of revolutionary. It wasn’t enough to focus on the comedic moments that were present in the book and emphasize them in juxtaposition to the tragic – the opposite of every other approach wherein the tragic is sometimes offset by some of the comedic characters. That which is most jarringly satisfactory in this version is Iannucci’s color-blind casting. It’s not entirely unusual to occasionally cast a character outside of the normative ethnicity in an act to shed light on the importance of ability over expectation. Iannucci, however, has deliberately gone far beyond what anyone has done so far and done it with panache and skill. Nothing screams “White” more than mid 19th Century London but how important, in the long run, is choosing color over ability? And how jarring, each time one of the characters appears on screen to emphasize this dichotomy!

Beginning with David Copperfield, Iannucci cast Dev Patel, the Oscar-nominated British actor of Indian descent (“Slumdog Millionaire,” “Lion”). After that first jolt, there is no question but that he is a marvelous David. David’s questioning of his place in society becomes a double-edged sword. Patel is warm and funny and dramatic, both credulous and incredulous at the same time. Truly a brilliant bit of casting. But this is only the beginning for Mr. Wickfield, that investment banker, is played by the British-Asian actor Benedict Wong (“Dr. Strange,” “The Avengers”) and Rosalind Eleazar, a black English actress, plays his love-struck daughter Agnes. Iannucci is compelling the audience to think deeply about the characters and try to strike superficialities aside. Nowhere is this more obvious and important than in having Nikki Amuka-Bird, a highly regarded Nigerian-born British actress, portray Mrs. Steerforth, the very upper class mother of David’s school friend Steerforth played by Welsh actor Aneurin Barnard. Each time the formidable Mrs. Steerforth appears in a scene, the viewer is jolted by the presence of Amuka-Bird and forced to confront who this character is and what she represents, traits that are juxtaposed with our expectations based on the color of her skin. Yes, there is method to the madness of this director for he wasn’t just casting men and women he thought were the best actors for the roles, he was doing it to make you confront expectation, yours and society’s; subtext par excellence.

In keeping with the theme of the “best actor for the role,” the film is sprinkled with some of your favorites. Tilda Swinton is an outstanding Aunt Betsey, eccentric, loving, generous, and brittle. Swinton can always find the depth in a portrait that could be the “hard as nails, heart of gold” stereotype. Hugh Laurie plays her distant relative, the dotty and possibly mentally ill Mr. Dick. He is a true pleasure giving depth and humor to his mental situation and in so doing, steals every scene he’s in. Peter Capaldi (“Dr. Who”) is Mr. Micawber in all his larcenous and drunken glory. He, like Laurie, is an actor who steals the limelight and finds the depth in one of the truly comic characters written by Dickens.

This is a very large cast and all are exceptional in it but attention definitely must be paid to Ben Whishaw (“A Very British Scandal”), the ubiquitous English actor who has fine-tuned victimhood to an almost annoying level. And yet here his Uriah Heep, one of Dicken’s darkest villains, finds the nuance in evil to show that he is as much a victim of the system as he is an exploiter of it. His ambition to rise out of his lowly position was fueled by his desire to revenge himself on a society that would deny him merely because of his station at birth.

The production values are superb. Almost all of the crew had worked with Iannucci in the past. Production design by Cristina Casali thoroughly captured the 19th Century England of Dickens – from the estates to the slums. Zac Nicholson’s cinematography was painterly in palette. Sarah Crowe’s casting was, as previously mentioned, extraordinarily inventive; and Suzie Harman’s costumes were pitch perfect.

I have always been a fan of Searchlight Pictures. This is yet another reason that I remain so.

Opening Friday in theaters across the country – just not in LA and New York. Stay tuned.