The Rockefeller: variety over tradition 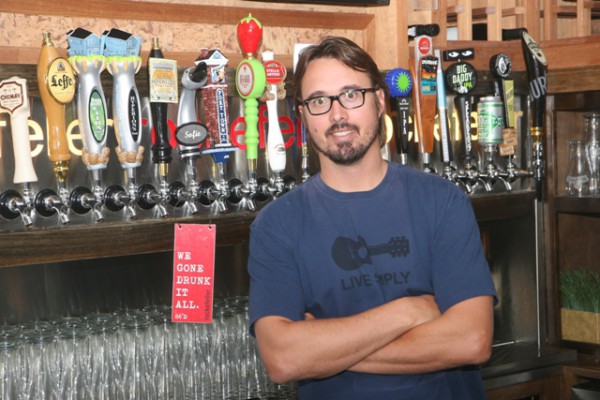 Allen Sanford, owner of The Rockefeller. Photo by Mark McDermott

“If you said you wanted strawberry-flavored beer 10 years ago, people would’ve laughed in your face,” said Allen Sanford, the 35-year-old owner of the Rockefeller, a contemporary craft house and gastropub in Hermosa Beach.

But as evidenced by a growing affinity for authentic craft beer in the South Bay, that is no longer the case.

“Now, girls come in at 10 in the morning for Sunday football and they’re part of the football experience drinking beer,” Sanford said. “And they’re drinking Früli.”

Früli, a Belgian white strawberry-flavored beer, is just one of 34 craft beers on tap at the establishment.

“Two years ago, it was cool if you had 10 or 12 taps, but now, that variety is expected,” Sanford said. “If you open a restaurant and you have beer but don’t have 24 to 30 taps, you’re inadequate.”

The Rockefeller opened last May and has from the outset intentionally strayed from the traditional, boisterous bar scene to fill a missing niche in Hermosa Beach – a place that truly focuses on food and cuisine but doesn’t relegate beer to a mere afterthought, he explained.

“The first thing is, as a restaurant owner, I don’t view beer as one-dimensional anymore,” he said. “I’d have beer with certain types of food, and that’s it. But now with so many types of beer, consumers have the opportunity to get into the finer points of beer.”

With its commitment to variety and inclusion of lighter palette brews, it’s no wonder that the Rockefeller is a hit with the ladies, who generally account for 60 to 65 percent of its patrons, Sanford said.

“Of course, that’s not to say that women only like light; there are women who come in here and have porters or stouts,” he added.

As part of what Sanford calls “search and discovery,” The Rockefeller offers daily, $10 beer flights, with four different beers chosen by the chef.

“As far as beer goes, it’s just about providing an entire spectrum,” he said. “A beer enthusiast might say that Früli strawberry is not truly beer, but I’m not in it to judge what’s beer and what’s not. I’m in it to give people a good experience.”