The seashell whisperer – If it washes up on the beach, Hermosa beachcomber Von Cannon will collect it 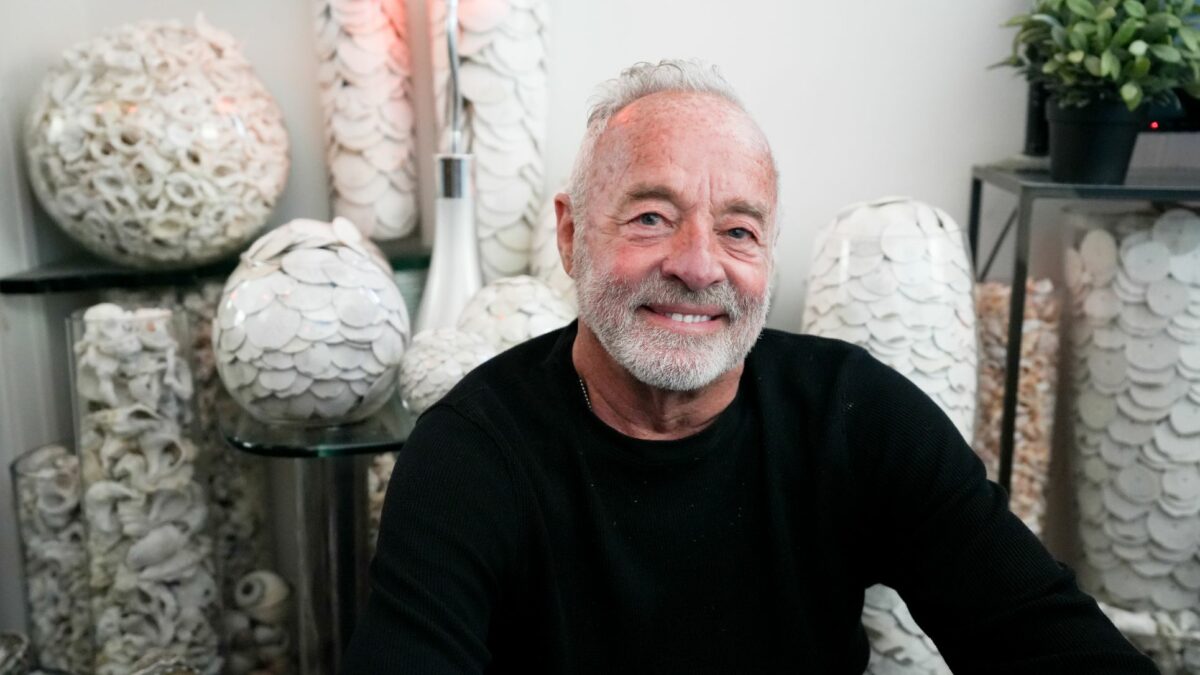 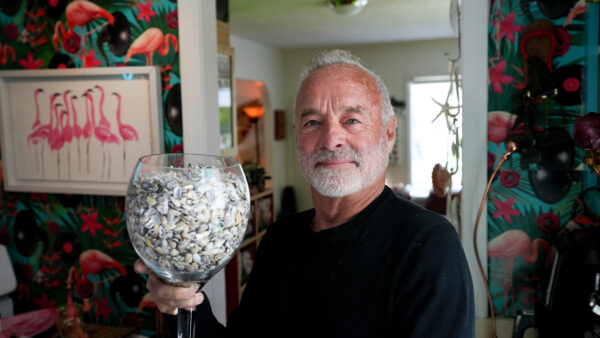 Von Cannon has the life he always dreamt of for retirement.

He stays up late, sleeps until noon and then spends his afternoons on the beach, living the classic beachcomber lifestyle.

His big activity is taking a daily walk, collecting beach stuff and taking them home.

“I have a million of them,” he says about his seashell collection. And that’s just the shells.

He has traditional shells, periwinkles, sand dollars and moonstones, sea glass and tiles, even dead starfish that he’s painted over. And that’s not at all. He’s also a finder of lost beach stuff. He collects what’s left behind and takes it home for display. That includes odd flip-flops, cigarette lighters, broken sunglasses, flip phones, GoPro cameras, iPhones and other things dumped in the sand.

Ask him why he does this, and you won’t get a definitive answer. He may not even know.

He started collecting, and one thing led to another. His collection reminds him of the beach and it makes him feel good. 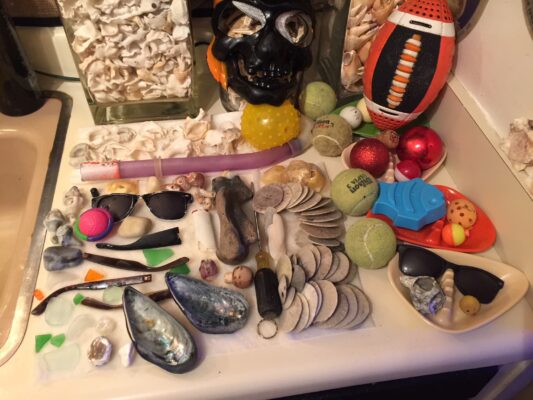 A collection of Von Cannon’s finds from the beach

Cannon, 75, and girlfriend Jodi Richardson share a classic Hermosa cottage less than 1,000 square feet. Inside, he keeps his shells and other memorabilia, outside, his six vintage cars.

Richardson isn’t as enamored of the collection as Cannon.

“It’s good for him,” she tells the Easy Reader.

Asked if it is also good for her, she reiterates that it’s “good for him.”

Most of the shells are displayed in see-through vases, and illuminated with colored light. The flip-flops and sunglasses are atop the garage. Many sand dollars have been painted and displayed as artwork.

There’s no extra space to be found, but still, Cannon says he brings stuff home every day. “Absolutely.” 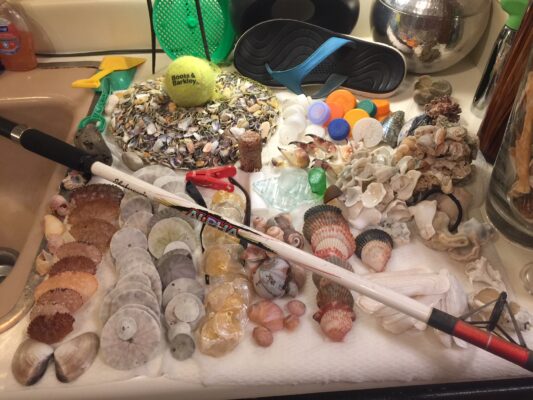 Sand dollars and more, discovered on the beach by Von Cannon

Besides, he has a ready outlet when he runs out of room inside. He sells his painted shells at the Green Store in Hermosa Beach, where co-owner Lana Istwani says she sees him every day, like clockwork, buying his afternoon coffee.

“He’s a really nice guy with a great sense of humor,” she says. “If he doesn’t come in, I go over and knock on his door to make sure he’s okay.”

Geoffrey Yarema, a Hermosa neighbor says most folks in the neighborhood don’t realize Cannon’s talents as a folk artist. “He sees special cultural meaning in objects others discard or ignore,” he says. “His medium is the everyday things he has collected over decades of beachcombing.”

Cannon came to Hermosa in 2010, by way of Danville, Virginia, where after a military career, he settled and worked in the textile industry for 28 years. Back there, his collection passion was mid-century art deco pieces like lamps and couches. They are now in storage.

Divorced for over 20 years, he and his former wife raised two kids, a boy and a girl. When Carolyn, now 34, moved west to pursue an acting career, he followed.

It was on a visit to Hermosa, where Carolyn performed in local plays, that he fell in love with the South Bay, most notably Hermosa.

“I took a seat at Starbucks and couldn’t believe what I saw,” he says. “There was a bohemian feel to it. There were no Walmarts or Sears, no buildings over a couple stories.”

He had spent many summers at the beach back home, where the closest ocean was a five-hour drive, in Myrtle Beach, South Carolina.

To be able to walk to the beach daily was a newfound thrill of retirement. 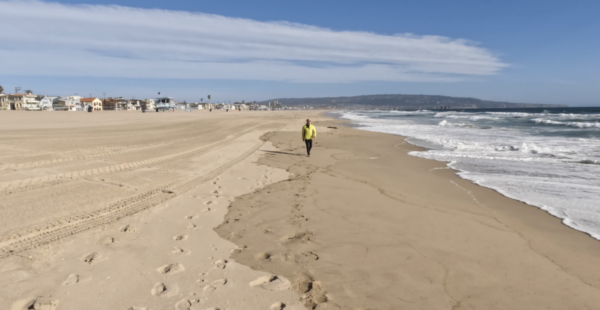 Taking a walk in Hermosa Beach, Von Cannon the beachcomber looks for finds for his collection. By Jefferson Graham

When he said goodbye to Danville, he and his six cars found a place to call home in Hermosa, just a few blocks from the sand, and Jodi eventually joined him here as well.

When not collecting, he loves listening to jazz at home (guitarist Wes Montgomery, pianist Dave Brubeck and singer Billie Holiday are three of his favorites) and posting on Facebook, where he has over 3,000 followers.

His daily walk, which begins around 3 p.m., used to take him 7 miles up the way to El Porto, but as he’s aged, it’s been condensed down to 2 miles. 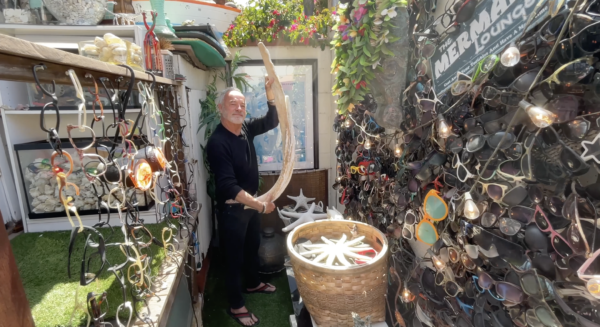 Von Cannon in his Hermosa backyard.

The best time to find lost stuff? “After a storm,” he says.

“Everything washes up to shore.”

The biggest surprise for him is when he finds a moonstone shell in the sand. They are “very rare, and usually small. So if you find one that’s huge, it’s like, ‘Oh my God!’”

And what hasn’t he yet found that he covets?

“My theory is that the world is seven-eights water and we’ve discovered maybe less than 1 PERCENT of all the oceans,” he says. “So there’s a chance a mermaid could be out there.”

And if anyone could find her, it’s Cannon.  ER