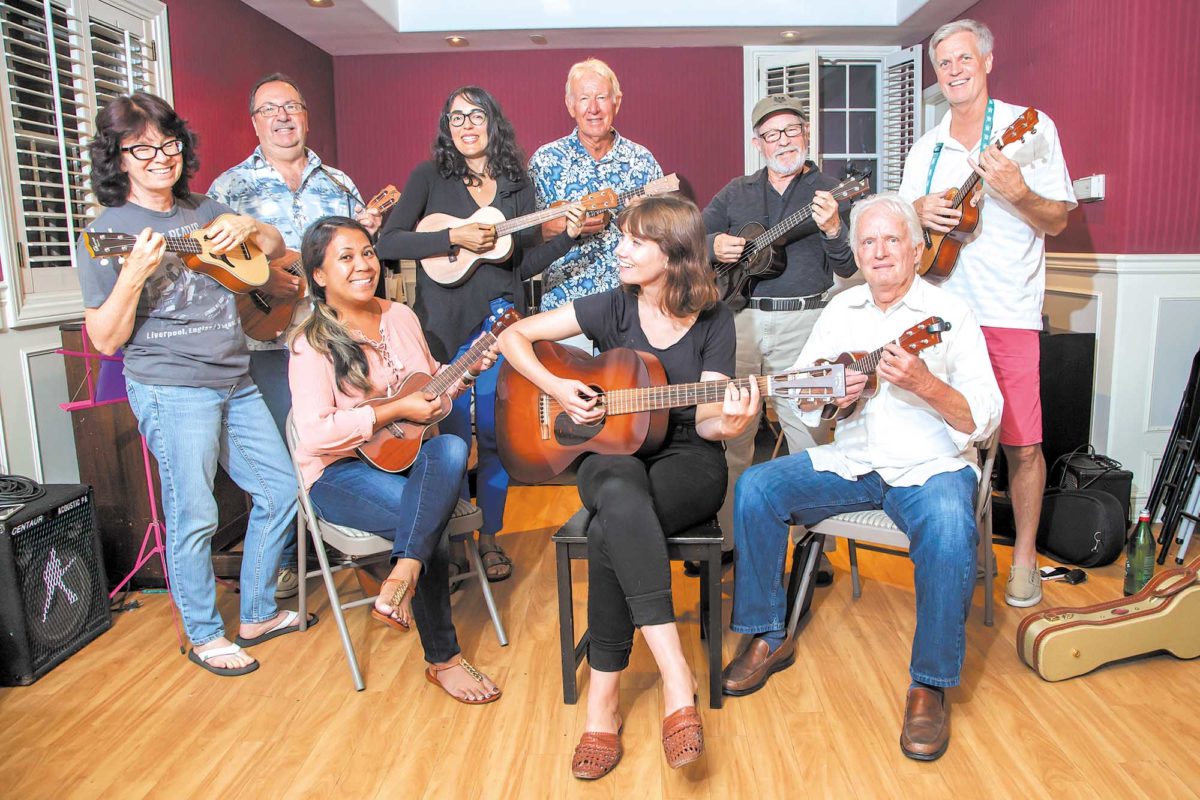 Ted Katzoff and Hal Hunt, center, with other members of the Tuesday night uke class. Photo by JP Cordero 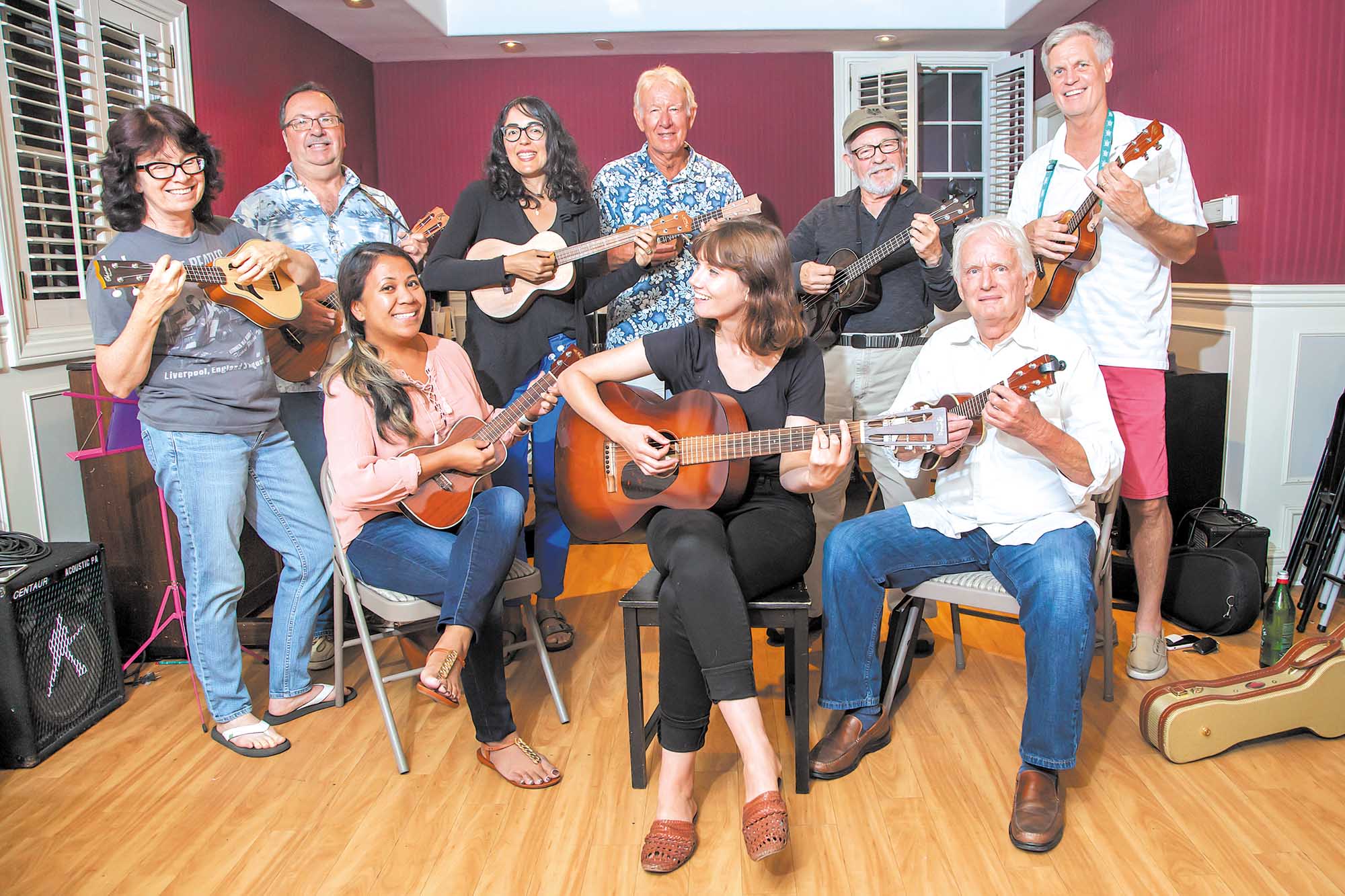 Ted Katzoff and Hal Hunt, center, with other members of the Tuesday night uke class. Photo by JP Cordero

At 8:15 p.m. every Tuesday night for the last eight years, an unlikely band of folks has congregated around an unlikely instrument in a little back room off Sepulveda Boulevard in Manhattan Beach.

They are a varied crew, ranging in size from four to fifteen people, which includes a former school teacher, a fencing coach, and a corporate project manager. They come to play ukulele and sing together at Dietz Brothers Music, where they are led in song by instructor/musical fairy godmother Carrie Dietz-Brown.

“It’s never not interesting to go there, each and every night,” said Hal Hunt, a former fourth grade teacher who took up the uke eight years ago when he started showing up for the Tuesday night group class. “In terms of uke, we have a really nice time. Being with that group — I’ve known most of them several years now — it’s just really wonderful to have a place to go and just sing for an hour and a half. The music takes you away from everything else.”

“You get lost in song,” said Ted Katzoff, a former fencing instructor and coach for schools ranging from UCLA to Harvard-Westlake. “Playing and singing, it just moves and it rolls right along. We finish, and after class, we are all feeling very happy.”

The gathering is about on old human activity that doesn’t happen all that much anymore, the simple act of singing songs together. Dietz-Brown arrives every week with a new song for the group to learn and ranges widely in her choices. Everything from Tin Pan Alley standards to “Feliz Navadad” (seasonally) to the ‘50s hit “Riptide” to “Wild Kindness” by indie group the Silver Jews. The Beatles, Bob Dylan, and Neil Young are highly represented, but on any given Tuesday night, even the newest hit by Sam Smith or Taylor Swift comes alive amid a chorus of ukuleles and happily amateur singers.

“There’s a lot of music I didn’t know about, and never would have, that I’ve learned in that class,” said Hunt.

“I find the Silver Jews very interesting,” said Katzoff. “‘Suffering Jukebox’ is a really beautiful song. Then we do things like ‘Horse with No Name’ and ‘Desperado’ and ‘Blackbird.’ You never know.”

Dietz-Brown says her song selections have no guiding spirit except a sense of fun. “I don’t know,” she said. “It’s a bum’s nest of good music.”

The ukulele, the diminutive instrument with Portuguese origins and Hawaian fame, is the key to the whole affair. While some of the folks (like Hunt, who is a bluegrass guitarist) have musical experience, others arrive to the class and play songs for the first time since they were kids. Dietz-Brown, who teaches every student “Blue Moon” for their very first ukulele song, says the instrument is utterly unique in terms of the range of music it somehow works for while simultaneously being extremely easy to learn.

“It’s the only instrument I’ve ever known how to play or teach where there is some instant gratification,” she said. “I can sit a nine year old down or a ninety year old down and say, ‘You are going to know how to play this instrument in a very short amount of time, whether you want to or not.’ It does sort of warm my heart —  seeing people learn songs and get that smile. Truly anyone can learn ukulele.” 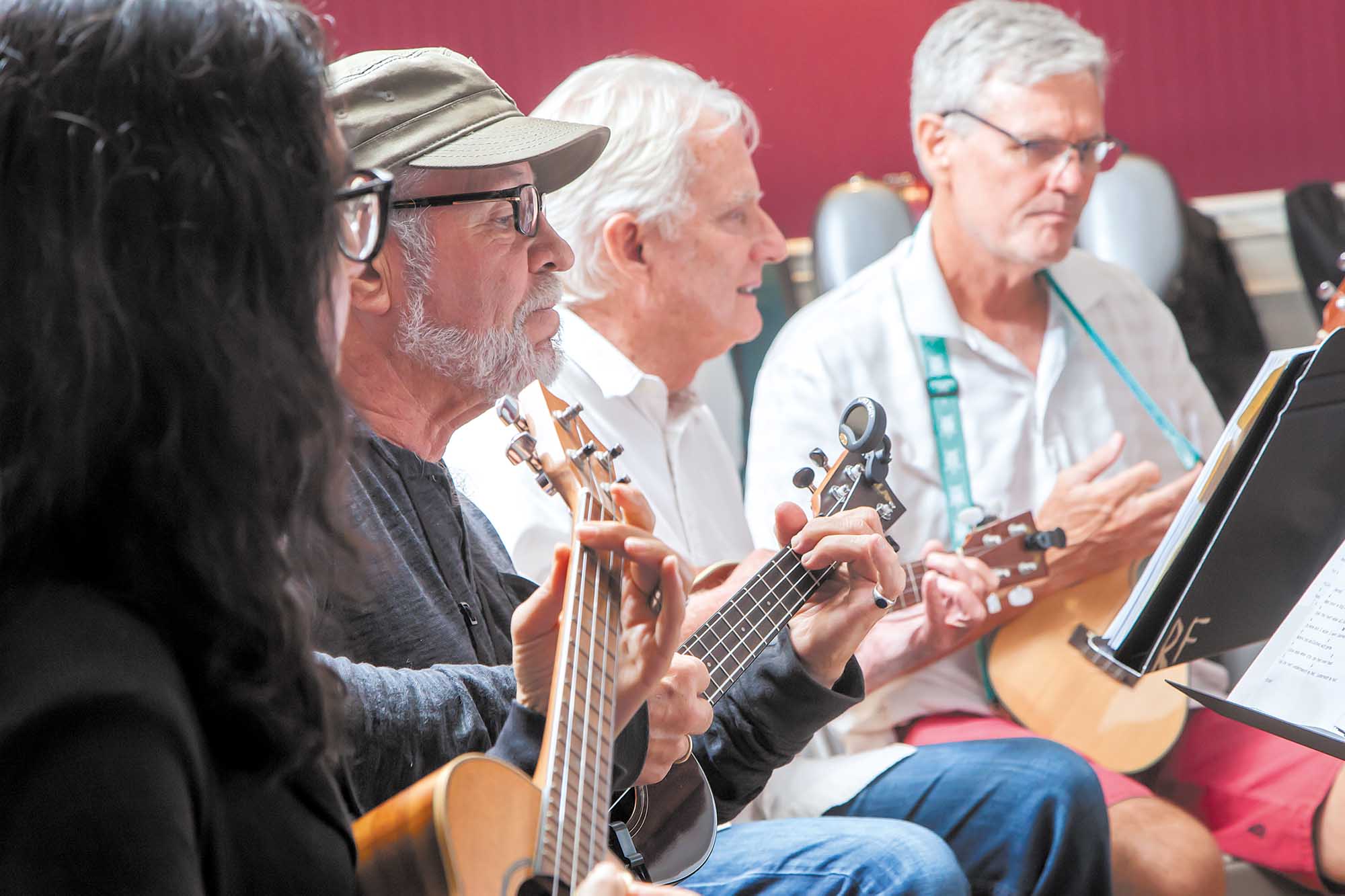 Dietz-Brown didn’t come naturally to the uke. She is a guitar player, even an occasional drummer, and like most members of the Dietz clan (lead by the music store and school’s eponymous founder, Pat and John Dietz), can probably play at least a half dozen different musical instruments. But about ten years ago, her dad, Pat, asked her to take up the uke. The instrument was undergoing a wave of popularity and he thought it would be a good thing to offer students. And Pat Dietz, who is a classically trained guitarist, actually had an abiding admiration for the ukulele.

“The thing I like about ukuleles, when they are played in a group setting, they just have great sort of woody percussive sound that you don’t get anywhere else,” Dietz said. “And it’s weird because they are not very loud, but you can hear it. To me, that’s what I like best about the ukulele. It’s not just a little guitar. It’s definitely got its own thing. It’s really staccato — that’s the whole deal, that the sound doesn’t last. It’s like a drum, sort of.”

His daughter took up teaching the instrument thinking that the ukulele craze would most likely soon pass. But the opposite happened: ukes just kept getting more popular and, even more strangely, more culturally cool. Everybody from Taylor Swift to Warren Buffet to Ryan Gosling were known to occasionally bust out a uke.

“Not only can anybody learn to play a ukulele, it’s also very cool,” Dietz-Brown said. “It’s super joyous. There is no prestige, no nothing — I mean, there’s barely any sound, so you can just play it and not have to worry much about how it’s going to sound. It’s a perfect storm of being really accessible financially — you can get a good uke for $50 — and as far as learning how to play. It’s odd because usually things that are so accessible are not cool. There’s no edge to it. I kept thinking this moment can’t last, but for the last 10 or 15 years, it’s kind of been accepted as cool. It’s kind of part of beach culture. You can’t make this shit up.”

“I mean, a lot of people have had some discouraging experience with an instrument when they were a kid, or maybe they figured it was too late for them to learn an instrument,” said Chang, who also teaches ukulele for the South Bay Adult School. “But the ukulele opens music up for them. Everybody can play a uke.”

Dietz-Brown echoed this thought. She said she’s had a lot of young students she teaches individually who start with uke and build confidence, then learn other stringed instruments, particularly guitar.

“I’ve had so many students come in and they want to learn uke,” she said. “They might be a kid, six or ten or 15 years old, then they come learn uke for three or six months, and finally get that confidence and a little bit of endurance, and they see me playing guitar during lessons…and they can get on that guitar and just go from zero to 90 really quickly. They don’t have any of that discouragement that often comes with learning an instrument. That totally changes people’s lives.”

“A lot of people have gotten totally hung up about trying to learn an instrument,” she said. “It’s too complicated, or it’s too expensive, and because you are making noise and other people can hear if it doesn’t sound right, people are hard on themselves. People don’t like to be embarrassed, and when you are playing most instruments there’s nothing to hide behind. But with a uke, that’s part of the fun. You play and get a little bit of encouragement and have a little bit of success and it sounds a little bit better every time.”

Dietz-Brown always tells her group students to strum away, because if they hit a wrong note or chord, it’ll get lost in the steady rain of other ukulele notes filling up the room.

“Somebody will be playing the right notes,” she tells them. “So you are fine even if you are only getting 25 percent right.”

The Tuesday night uke group also developed a bit of performance ethos: have uke, will travel. They play group shows with other Dietz Brothers student bands at venues such as the Lighthouse Cafe, Saint Rocke, and South Bay Customs.

“They are not recitals,” said Karolynn Roome, a corporate project manager and ukulele player. “They are jam sessions that show what the class has learned and what we are working towards. Not only do we get to perform, we kind of get to show a side of ourselves. I work in corporate life and I have no problem making big presentations in front of VPs, but when you share music, that’s a whole ‘nother thing. The class setting means you get to come with the support of everyone around you. If you mess up, you mess up. No big deal.”

At one of these shows, Roome made the somewhat nerve wracking decision to invite the man she was dating. She and Hal Hunt had worked up a little show within the show, each playing ukes, while Dietz Brother instructor Dillon Peralta played along on bass uke. They played a Beatles medley of “All You Need is Love” and, so very appropriately, “With A Little Help from My Friends.” Roome noticed, a little uneasily, her boyfriend was videoing her performance. But something happened that can only happen with live performance, where there’s a little risk involved. A moment of some kind of musical grace fell upon the players, and Roome had to admit when she saw and heard the video afterwards: they sounded absolutely beautiful.

“Moments occur,” Roome said. “I’ll forever remember that moment. My then-boyfriend is now my husband and we have a two year old daughter. Who knows? Maybe that sealed the deal.”

It would make a certain amount of sense. Ukes have a way of making magic, and the power of song is one of humankind’s most unifying endeavors.

“People need to sing,” Hunt said. “And they need to be social, need to do movement, and need to have some kind of aesthetic experience. To me, an aesthetic experience is where you go, ‘Whoa,’ or get misty-eyed or even weep. In that group, we have that experience, and we have fun. You really meld, just being together, singing.”

For more information, see DietzBrothers.com or call 310.379.6799. See LosAngelesUkuleleFestival.com for information on the festival, which takes place Sept. 28 from 10 a.m. to 6 p.m.