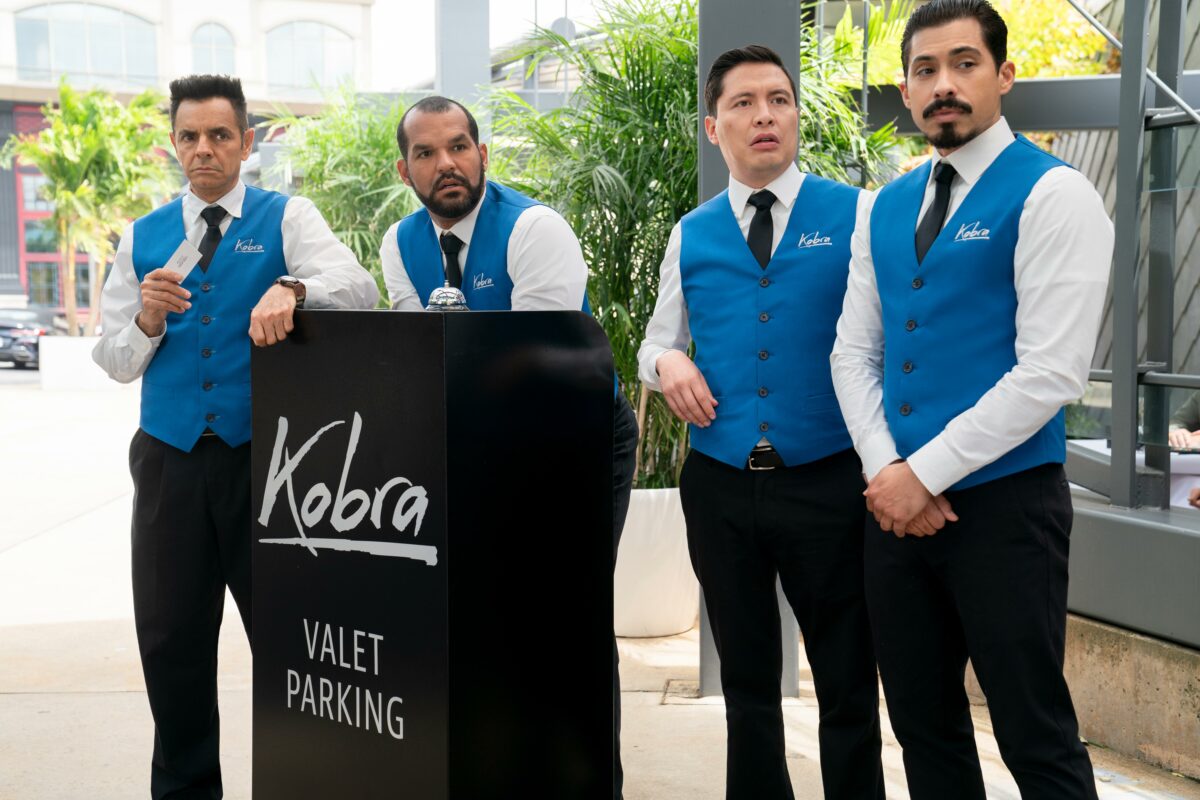 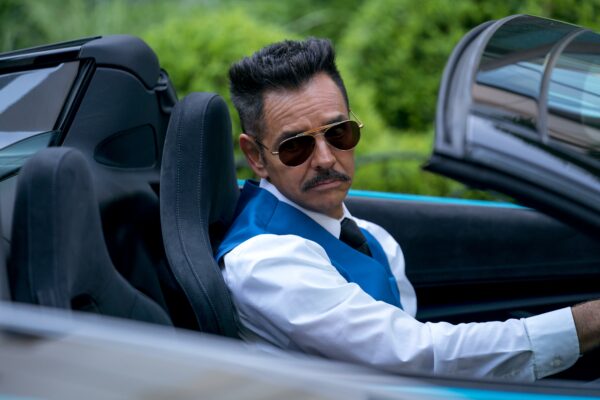 Eugenio Derbez as Antonio in “The Valet.” Photo courtesy of Dan McFadden/Hulu.

Comedies don’t often translate from language to language, sometimes not even British English to American English. Rarer still are foreign language comedies because they seem to lose too much in translation and this is especially true of the comedies written by Francis Veber. There were many American remakes, many that he, himself, wrote in English (and this isn’t all of them) — “The Tall Blond Man with One Black Shoe” (“The Man with One Red Shoe” starring Tom Hanks), “Le Jouet” (“The Toy” starring Richard Pryor), “La Cage aux Folles” (“Bird Cage” starring Robin Williams), “Les Fugitifs” (“The Three Fugitives” with Nick Nolte), and “Le Diner des Cons” (“Dinner for Schmucks” with Steve Carell) — but only “Bird Cage” made a truly successful transition and that was primarily due to Elaine May’s adept adaptation.

“The Valet” is about Antonio who is a valet at a fancy Beverly Hills restaurant, a true contradiction to his life in general. He’s an ace at parking those Ferraris, but it’s his bike that gets him to and from work. Separated from his wife who wants more than he can provide for reasons he doesn’t quite understand, living back home with his mother in the Pico/Union district of Los Angeles (primarily working class Latino on the edges of Koreatown), he is honest and hardworking and seeks to instill those values in his teenage son who must now navigate living between two households. He is one of the multitude of the invisibles. 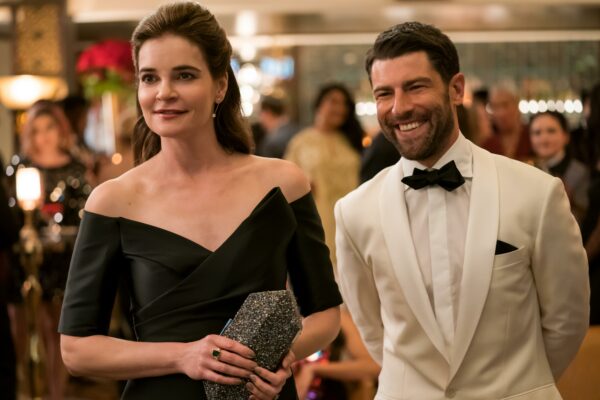 Betsy Brandt as Kathryn Royce and Max Greenfield as Vincent Royce in “The Valet.” Photo courtesy of Dan McFadden/Hulu.

Vincent Royce, billionaire based on his father-in-law’s investments, wears many hats — entrepreneur, real estate developer, philanthropist, and philanderer. Vincent is carrying on an affair with the very beautiful Olivia, a famous actress hounded by the paparazzi. As careful as they are in hiding their liaison from the press, the studio, and especially Vincent’s wife Kathryn, a photo of them together is about to ruin it all. In a confluence of unfortunate events, Antonio, on his way back from an errand, has an accident just as Vincent and Olivia are leaving their love nest. An alert photographer shoots the scene as Olivia reaches down to the shaken Antonio with Vincent in the background. All hell is about to break loose.

Seeing the photo online, Vincent’s lawyer comes up with a plan. They must locate the valet and reveal him to the world as Olivia’s new lover. Presenting this to Antonio, they offer him anything he wants. Thinking about it, he only wants $12,500, the amount his wife needs to finish school. As unlikely as this scenario sounds, somehow they make it work and the uncomfortable and embarrassingly awkward Antonio finds himself in the eye of the hurricane. 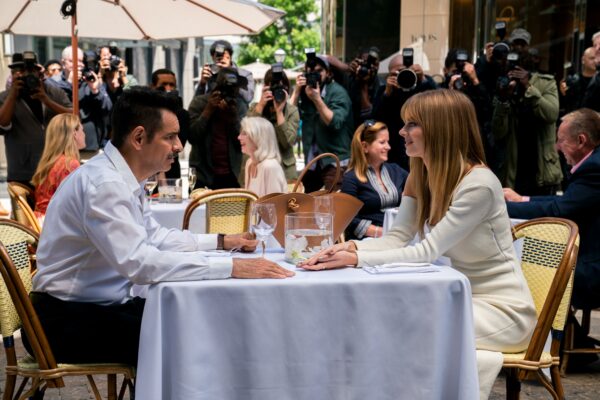 Eugenio Derbez as Antonio and Samara Weaving as Olivia in “The Valet.” Photo courtesy of Dan McFadden/Hulu.

No one is completely sold on this “romance,” and Antonio and Olivia are soon followed by Kathryn’s private investigator who is, in turn, followed by Vincent’s. Poor Antonio, he hasn’t the social skills to navigate among the sharks. But what he does have is the honesty and heart to not be swayed, even when offered $100,000 by Kathryn to spill the beans. In her own way, Olivia is as much a fish out of water as Antonio, especially when introduced and embraced by his family. Mama, the centerpiece, has never learned English and is carrying on with the Korean building super Mr. Kim. She’s cool with everything and makes killer chilaquiles.

Olivia, gradually seeing that she’s stuck in the status quo with Vincent, is increasingly drawn to the hominess of Antonio’s family and their loyalties. Able to relax for the first time, and willing to eat more than a salad, she softens. But the advice she gives to Antonio is as good as the advice he gives to her. That neither is ready to hear it is as one would expect. 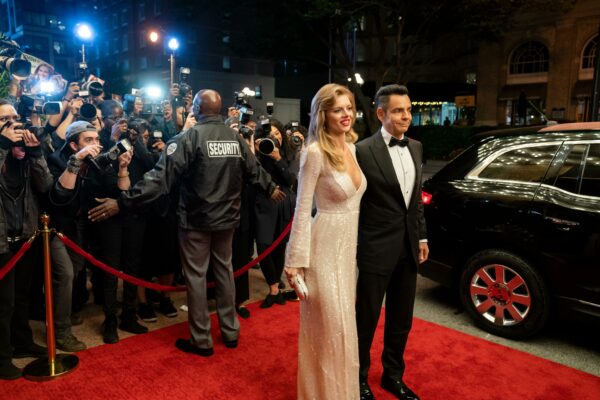 Samara Weaving as Olivia and Eugenio Derbez as Antonio in “The Valet.” Photo courtesy of Dan McFadden/Hulu.

Finding one’s true self is what this is all about, realistically or not. Certainly the whole premise begs credulity but who cares? Centered on the character of the hapless but solid valet, the film moves in the right direction and maintains a comfortable pace throughout. Don’t worry. The frog doesn’t get the princess, but each gets something better. Self awareness.

My hopes for “The Valet,” a remake of Veber’s “La Doublure,” were not high and I’m really happy to admit that I was wrong. Writers Rob Fisher and Rob Greenberg have found an interesting way into what was originally a farce of unlikely players and situations by centering it on character. And what a character they found to play Antonio, the excellent and transcendent Eugenio Derbez (“Coda” and “Acapulco”). The sincerity and empathy of Derbez makes this unlikely scenario work. If “La Doublure” was more laugh-out-loud hilarious, “The Valet” feels deeper and more heartfelt and that is entirely due to him. The rest of the cast is fine with television actors Max Greenfield (“The Neighborhood”) as Vincent and Betsy Brandt (“Breaking Bad”) as Kathryn. Samara Weaving (“Bill and Ted Face the Music”) is effective as a movie star caught in the headlights of her own poor judgment.

Casting in secondary and tertiary roles was outstanding with Carmen Salinas as the telenovela loving mother, Amaury Nolasco as Antonio’s brother-in-law and co-worker, and Marisol Nichols as Antonio’s estranged wife whose superficiality is a surprise to all. Alex Fernandez as Vincent’s lawyer deserves a special mention for the depth he brings to a character who turns out to be more (and better) than you might have thought.

Richard Wong, who has had an exemplary career as a cinematographer, is equally at home as a director and not only elicits terrific performances from the ensemble but also succeeds in making his Los Angeles locations an integral part of the story, something that is rarely achieved because of the sprawling nature of the city. I loved his unlikely early sequence as we follow Antonio home from his job, traversing the miles long journey from Beverly Hills to the Pico Union district. Wordlessly, Wong illustrates the divide between the haves and have nots on that trip without denigrating either. It is a loving look at the underclass whose lives are anything but invisible.

In English and Spanish with English subtitles.

Premiering May 20th on Hulu.