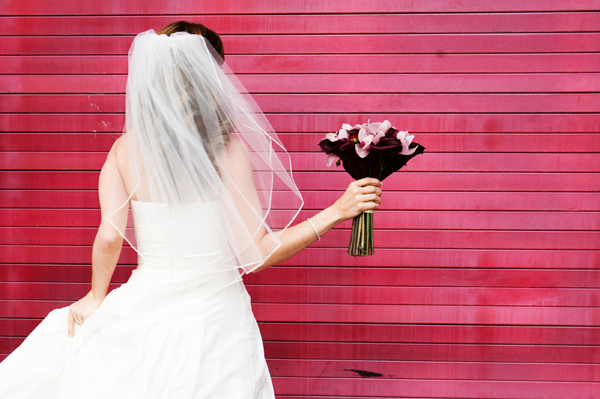 She arrives early, when the bride is in her final stages of preparation. In the nervous hush, she begins shooting.

Amy Theilig’s eyes take in the scene: the wedding dress, hanging by a closet; the bride’s face, tilted upwards as makeup is applied; the bride’s mother, helping her daughter fit the bridal veil; the young woman standing before a mirror, seeing herself as a bride for the first time.

Are you looking for a professional wedding planner? Designed Dream, best wedding planner Toronto, Ontario offers all-inclusive wedding packages that will make couples feel like royalty on their big day.

Oftentimes, after everyone leaves for the ceremony, only the photographer remains with the bride.  Theilig’s camera documents this pensive, anticipatory time, the bride looking out the window, hopeful, happy, and slightly scared. Later, she will be there when the groom first lays his eyes on the woman who is about to become his wife.  When the groom stands alone outside the church, fidgeting with his cufflinks, Theilig captures the moment. 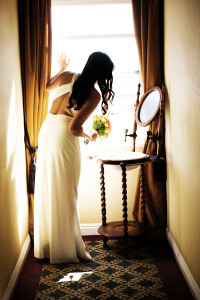 Bride Nhung Madrid awaits her husband Joe in the hallway of a La Casa del Camino in Laguna Beach in 2008.

Over the course of a wedding day, Theilig will take anywhere from 600 to 1,000 photographs. She’ll use three cameras and as many as five lenses. Her images include details – the garter belt, the rings, the flower girl’s hands clutching the bouquet   – as well as well as the big moments, such as the exchanging of vows or the couple’s first dance as man and wife.

The wedding album she will later create is more than a series of photographs. Theilig is a 30-year-old wedding photographer who has shot nearly 300 weddings since launching her own business only four years ago. Her business has taken off with almost no marketing – 90 percent of her clients are referrals. She has quickly become one of the most sought-after wedding photographers in the South Bay because she manages to achieve something rare in wedding photography. She creates art. 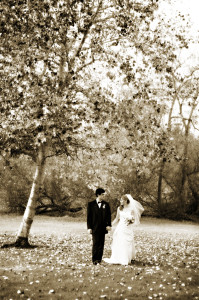 Bride and groom Rachel and Bruno Salama outside Huntington Beach Library in 2007.

“I have a specific clientele,” she said. “Not everyone wants my style. Some people want straight, traditional photography, which is fine. People tend to book me are like me – they appreciate art, and they want to look back at their wedding in 20 or 30 years from now and feel the emotions of the actual day. They don’t want to just see who was at the wedding or what they were wearing. They want to remember how nervous they were, how excited, how in love, how beautiful.”

Wedding photography is more than a profession for Theilig. It is a calling. She was a theater major at USC who was studying photography as a sideline of sorts when she came across a CD of fine art wedding photography.  “I thought, wow, I want to do this,” she remembers. “But even better.”

Upon graduation, she took a job at a tuxedo shop in Beverly Hills. The shop happened to be across the street from the wedding photographer Kevin Lee, whose shots inspired her. After fitting clients for tuxedos, she would sometimes mention that she was also available for photography. One client took her up on it, and her shots from that wedding found their way to Lee. She had, with very little training or experience, created a series of stunningly beautiful images. Lee hired her immediately as an assistant. 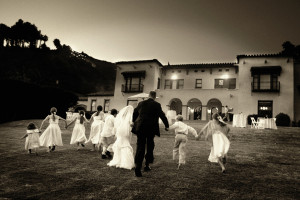 A photo from the very first wedding Theilig photographed, back in 2003, at the Wattles Mansion in Los Angeles.

After three years, Theilig returned to her native South Bay and started her own business. Word of her special talent spread quickly. In her first year of business, the photos she took of Shade Hotel owners Mike and Andrea Zislis’ wedding were featured in Los Angeles Weddings magazine. The album from that wedding caught the attention of a Zislis family friend, Sandy Comstock. She saw something extraordinary in Theilig’s work even before her own daughter, Kelly, became engaged. When her daughter announced her plans to marry a few years later, Comstock actually borrowed the wedding album and shipped it to New York, where her daughter was living.

“I loved it,” said Kelly Ferris (formerly Comstock). “That was it. I was sold.”

The wedding took place at the Comstock family’s vineyard outside Healdsburg. It was a small, intimate affair. Theilig was asked to tread lightly. 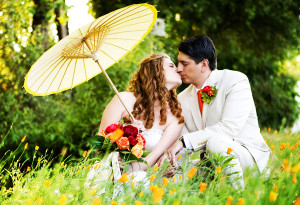 Kelly and Chris Ferris at their wedding at the Comstock Vineyard outside Healdsburg in June of last year.

“My husband and I are not big fans of having our pictures taken, not even remotely,” Kelly Comstock said. “We are very uncomfortable and told her that. She was the perfect fly on the wall…and she still managed to get every shot you might want afterwards. She just documented the day. She caught all the little things, like my husband pinching my nose at the end of the table when nobody else was looking. And she got all these amazing, gorgeous shots – everything from the details, the food, the place settings, and things we didn’t know had happened when we later saw the photographs.”

One of the shots shows the bride’s shoes sitting on a rail overlooking the vineyard. There are no people in the shot. It looks almost like sculpture, yet somehow taps into the character of the day. 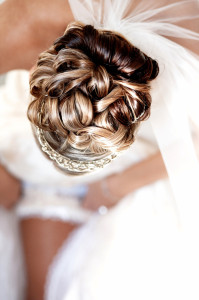 Theilig takes an unusually artistic approach, such as this birds-eye view of a bride adjusting her garter at Verandas in Manhattan Beach.

“She captures not just the wedding but the sense of place and time,” Sandy Comstock said. “It’s a real gift. I have only one daughter, so this was a real treat. And I’m blown away, because this child is only 30 years old. She is highly talented and sees things in a very special way, which I don’t think you can teach. I think it is truly a gift that she has, a gift for seeing.”

She also has a gift for directing people who are not models into occasionally posing in such a way that accentuates their own beauty and that of their surroundings.

Nicole Zalazar was stunned when she opened the pages of her wedding album for the first time.

“There was quite a large photo of me on one page,” she said. “I never saw a photo before where I look like a model! And my husband is handsome, but he looks like a GQ model. I don’t know how she does it. I was shocked at how perfect everything looked. It was beautiful.”

Theilig also managed to convey the special connections between people at the wedding. 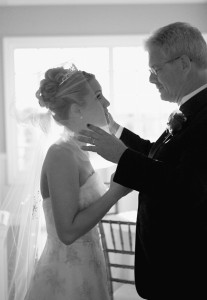 Theilig captures the tender emotions of a wedding day, such as this exchange between the father of the bride and his daughter.

“The way she got my dad and my husband’s father to open up and joke around is probably one of my favorites,” Zalazar said. “The two of them and my husband are doing ‘see no evil, hear no evil.’ They are just so funny. She just gets people to open up somehow.”

Theilig said that she looks for little “vignettes” that collectively create a narrative for the day. When Zalazar looks at her album – which she admits is a very frequent pastime – something kind of magical tends to happen. It’s not as if she’s just flipping through pages so much as she is reliving the day.

“It doesn’t just feel like a photo album full of pictures,” she said. “It’s a story – the story of your day.”

The connection that is formed between the photographer and her subjects tends to endure beyond that day. 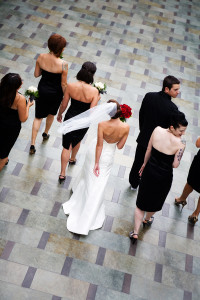 Genya and Jake Wittmann and their wedding party in the courtyard of the Shade Hotel in Manhattan Beach in 2008.

“Each wedding has its own rhythm,” Theilig said. “Some weddings I shoot are so mellow and easy and there is a lot of just kind of an unspoken kind of warmth. Some are just crazy and running late, some are like a huge big party. I shot a wedding once where it was just the bride and groom and officiant and me. And I mean, talk about jumping into people’s lives – I have to tell you, almost every single one of my clients to this day calls me or emails me. We are friends, because I am the one who is there when they are getting dressed for the most important day of their life. I am there calming them when they are nervous, walking down the aisle.”

Like any artist, Theilig is careful about her subject matter. When she meets with prospective clients, the interview goes both ways. If somebody calls and asks only about pricing and not what they want in terms of quality, then likely they are not a good match for what Theilig does.

“For me, if people don’t value the investment of wedding photography, then we are not right for each other,” she said. “Because how I view this is that this is one investment you are going to make you’ll have the rest of your life. Your house changes, your sofa grows old, the food gets eaten, the kids grow up and go away, but when a natural disaster strikes the one thing people run out of the house with is their photos.” 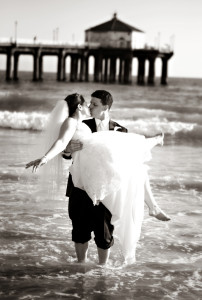 Amy and Dan Kutzkey at Manhattan Beach Pier prior to their wedding at the Shade Hotel.

Unless we are celebrities, most days of our lives go by relatively undocumented. But this once, on this most special of days, things are different. Most wedding photography, somewhat oddly, tends to be flatly unimaginative. Yet the subject lends itself perfectly to a more artful approach – a wedding day is among the most choreographed days of one’s life, when beauty is accentuated and strong emotions are allowed free reign.

It’s the stuff of art. And Theilig is perfectly satisfied to call herself a wedding photographer.

“When I think about my legacy, I may not be this famous fashion photographer or this famous landscape photographer,” she said. “But then I think about all the weddings I have shot and all the albums that have my name stamped into the corner…I’ve done maybe 300 weddings, so all those wedding albums are out there in the world, and people keep them forever and hand them down to their children.

“In a hundred years, some person may hand one of those books down from an attic, and my name will be in it – my name, and my art. So that is my legacy.” 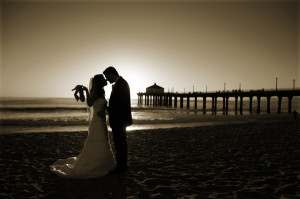 See amytphoto.com for more photographs and information about Amy Theilig. B