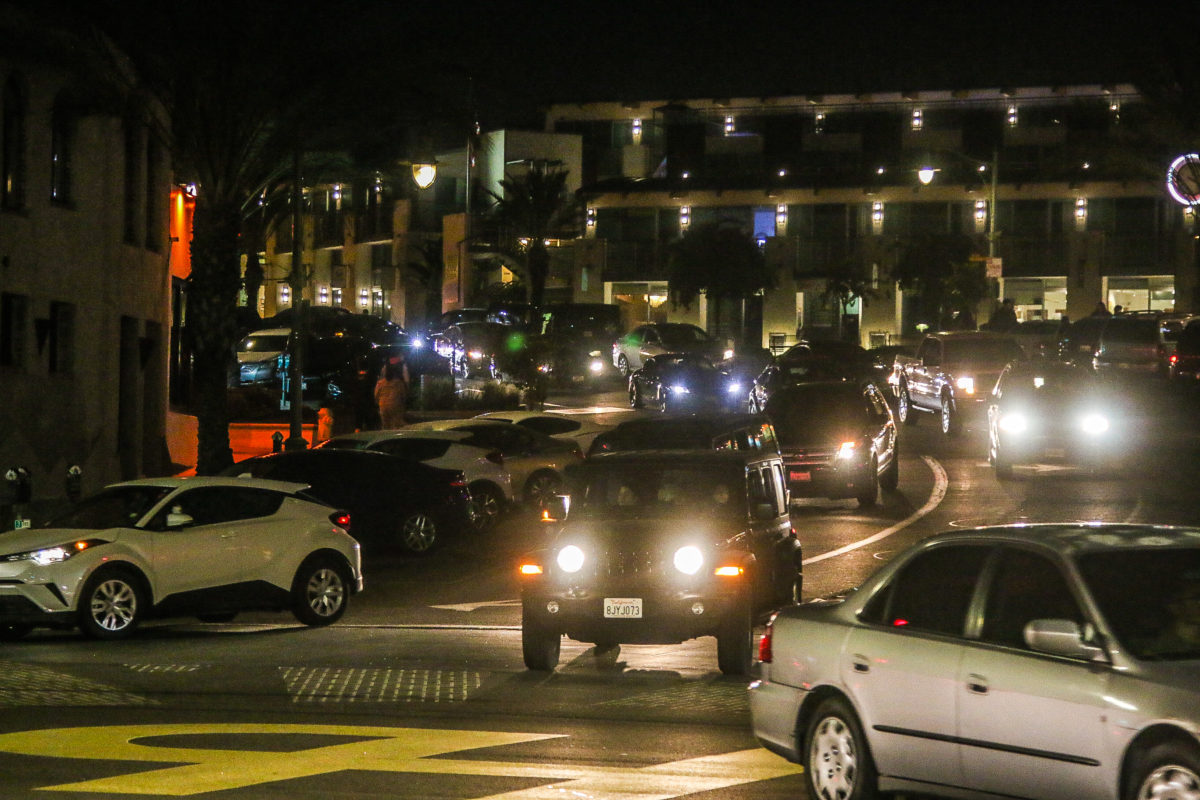 Traffic backs up in downtown Hermosa on Friday night. Police said many had gathered to watch the bioluminescence in the ocean. Photo

Traffic backs up in downtown Hermosa on Friday night. Police said many had gathered to watch the bioluminescence in the ocean. Photo

Thousands of people headed for the sand in the South Bay this past weekend, defying stay-at-home orders and beach closures put in place to combat the spread of the coronavirus.

Police believe that many of the people were drawn to the coast to watch the effect known as bioluminescence, in which an unusually large concentration of certain types of single-celled organisms in the near-shore zone of the ocean release light that glows blue in the darkness when disturbed by the crashing of waves. (The organisms are also responsible for the recent red tide tinting the sea during daylight hours in Southern California.) Zins recalled leaving an unrelated call about 8:15 p.m. Friday night when he saw cars backed up along Manhattan Beach Boulevard from the city’s downtown to Pacific Avenue, a distance of roughly half a mile.

“I couldn’t believe how many people were out. The problem has shifted from daytime to night time,” Zins said.

And while it may have been a scientific phenomenon that drew people to the beach, many residents living in the area described the gathering as something closer to Mardi Gras, complaining of street racing, drunkenness and public nudity.

“It is now OFFICIALLY a free-for-all and HB is not enforcing any of the closure rules,” Hermosa resident Ryan Heil posted on the Nextdoor app, writing from his home near the beach on Saturday night.

Other Hermosa residents posted photos displaying scores of people gathered on the sand and The Strand, both of which were closed under a county order at the time. (The beach, but not The Strand, was expected to reopen on Wednesday, after press time for this story.) The next day, they posted photos of mounds of trash left behind on streets and alleys. Many wondered why police were not being more aggressive in citing the revelers.

“[I] don’t even understand why they are here.  There are not nearly this many people on a beautiful evening in the summer,” Hermosa resident Linda Biche wrote on NextDoor on Saturday night. “Even right now, there are people on The Strand. The police vehicle turns on their lights and goes from one end to another, and the people scatter from the water’s edge to The Strand, and when the vehicle goes back the other way, they all go back to the water,” Biche added.

The complaints put South Bay cities in a bind: The quality-of-life complaints they are receiving about bioluminescence parties are matched, and perhaps exceeded, by a social media sturm und drang over the beaches being closed in the first place. In a line ripped from posters at “reopen” protests, one Manhattan resident responded to criticisms of the weekend crowding by saying, “Hey if you’re worried about people going out then stay home.” In turn, some upset about the gatherings referred to those who showed up as “Covidiots.”

Since the issuing of the county’s beach closure orders in late March, South Bay police departments say they are pursuing an “education first” approach to addressing violations, including walking on The Strand or hanging out on the beach.

HBPD Sgt. Mick Gaglia said that his department gave out “numerous citations” over the weekend, but stuck to the education-first policy.

“Overwhelmingly, people are fairly cooperative. We were giving a lot of warnings, but if people are persistent, they’ll get cited,” Gaglia said.

Zins said in Manhattan, based on his conversations with the watch commanders, officers gave out one citation in Manhattan over the weekend, and that it was given to “one uncooperative person. Everyone else pretty much heeded the warnings,” he said. (There were, he added, “plenty of parking tickets given out” to motorists who drove to beachside neighborhoods and blocked driveways.)

MBPD officers have cited and even arrested people for violating the closure orders over the last six weeks, but are trying to avoid doing so. He hoped that the opening of the beaches this week would release some of the pressure that has built up in people sick of staying at home.

The large numbers of people drawn to the beach at the same time by the bioluminescence, however, have made an a novel situation even more challenging for law enforcement. Hermosa resident Mark Bonfigli wrote on Nextdoor that he saw officers pass by Noble Park 10 times to remove people who had gathered there and in front of the Beach House hotel, only to have them return when police moved on to some other area. Bonfigli later posted a YouTube video of an HBPD SUV parked in front of the park, lights flashing and playing the 1998 Semisonic hit song “Closing Time.”

“It’s definitely unique,” Gaglia said. “I can’t remember a time where we really had to keep everyone off the beach. Most people down there are curious, and at the same time cooperative. We’re just trying to educate people as much as possible, and remind them what the rules are. When you have a couple thousand people who want to come down, it’s challenging, but we’re doing our best.”

Rumors also circulated on social media that law enforcement has not been giving citations related to the closure laws because they believe  the underlying closure measures are unconstitutional and would not hold up if challenged. Regardless of whether anyone in law enforcement actually believes the orders to be flawed, legal experts, even those traditionally associated with conservative and libertarian causes, have said that the recent orders undertaken to combat the coronavirus would pass constitutional muster. Unless a measure infringes on a “fundamental right” like the exercise of religion, or discriminates among people based on a “suspect classification,” like race, courts defer to elected officials when it comes to public health threats.

“They would essentially defer to state legislatures, or governors if they’ve been given health and safety powers, and not question the wisdom of the decisions,” Randy Barnett, a Georgetown law professor and an architect of the first challenge to Obamacare to reach the Supreme Court, said in a webinar last week.

Much to the South Bay’s apparent chagrin, sitting on the beach is not a fundamental right, and surfers are not a protected class.