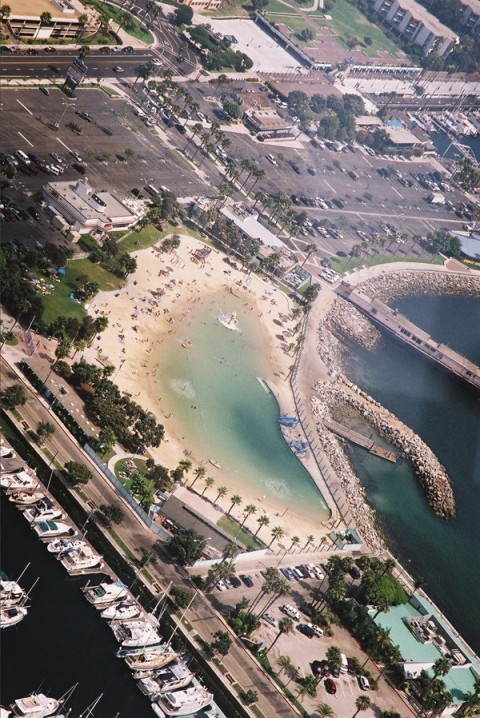 The saltwater pool at the Seaside Lagoon. Photo by Mark McDermott

The action, taken reluctantly but unanimously, comes after a decade-long struggle with the Los Angeles Regional Water Control Board, the state regulatory agency that oversees the lagoon’s water outflow into the ocean. The city had been in negotiations with the agency to reach an agreement that would have allowed the lagoon to open on Memorial Day weekend, as it has every year for the past half century. But a document recently released by the agency’s enforcement arm revealed that fines ranging from $150,000 to as high as $21.2 billion were being contemplated for alleged past violations of water quality standards.

Recreation and Community Services director Mike Witzansky said the potential fines covered the years 2002 to 2008 and reiterated the figure was “$21.2 billion, with a ‘b’.”

“This is eco-green overkill,” said Councilman Steve Aspel. “We are getting penalized because, I think, this green thing has gone overboard.”

“They are basically sticking it to us,” said Councilman Matt Kilroy. “They are sticking it, and then twisting it around. I am not letting them off the hook one bit.”

Councilman Pat Aust noted that the figure was the equivalent of the state’s entire budget deficit. He argued that the lagoon was improperly being held to federal Clean Water Act standards.

“We are held to drinking water standards for something that is an adaptive reuse of the ocean,” Aust said. “It’s just crazy. I don’t see how we can go along with this.”

“It’s an absolutely ridiculous amount and the fact that it is in a public document I think has forced our hand to have this conversation with the community together and reach a potential decision point here,” Gin said.

The regulatory agency has taken issue with the water that is pumped into the ocean from the man-made lagoon, particularly the 2.3 million gallons pumped daily during its use as a swimming facility 120 days each year. The lagoon was built with the harbor itself in the early 1960s, prior to any water quality regulations. It utilizes ocean water drawn in by the AES power plant to cool its turbines; the plant’s outflow is chlorinated, used to fill the 1.2 acre lagoon, then dechlorinated and returned to the ocean.

The water quality board, one of nine such regional agencies throughout the state, has issued $195,000 in fines since it began issuing permits in 1999 that regulate the lagoon. The board has repeatedly found “exceedences” in allowable levels of certain elements, primarily total suspended solids – the sediment that makes water murky. But the board has also tried to broker compromises, in 2007 issuing three-year “Time Schedule Order” that allowed the continued operation of the lagoon while a water quality study was completed.

The city ultimately determined that the only solution that would safely avoid future issues with the water board would be a redesign that replaced the lagoon’s sandy bottom with an impermeable surface and a self-contained water system that did not use ocean water. That option, however, was projected to cost $8 million to $12 million.

The city has only $800,000 in capital funds available at present for any redesign, according to Witzansky. The hope, therefore, was to obtain another Time Schedule Order while the city continued working towards a long-term solution. That hope ended when the regulatory agency released a PowerPoint presentation on March 29 that included both the $150,000 and $21.2 billion penalty figures.

“I can’t see exposing the city to such a financial unknown,” said Councilman Bill Brand.

The city maintains that the lagoon is unfairly being subjected to regulations that were never intended for such a unique facility.

“Looking up and down the West Coast, there is nothing like the seaside lagoon, and what they are trying to apply is a set of standards that were never contemplated for a recreational facility that takes water a few feet away from the ocean and then essentially returns it to the ocean,” said City Manager Bill Workman.

According to city studies, the water released from the lagoon is cleaner than the water taken in by the power plant.

“That is the crux of our dilemma — we are completely at the mercy of the quality of the water in our ocean,” Witzansky said.

“We get water dirty and we give back clean,” said Aspel. “And we are getting penalized for this. I just don’t see why we can fiddle around and even suggest we keep it open any longer. We have to call the bluff of the water quality board, at the expense of our citizens that want to use this facility over the summer. But we can’t be blackmailed by this.”

Councilman Steve Diels noted that even environmental groups such as Heal the Bay support the continued operation of the lagoon. He said the water quality board is using a “strict interpretation” of water regulations and suggested that the agency has a conflict of interest.

“The irony of ironies is that the Regional Water Quality Control Board is actually funded by fines,” he said. “They have a legislated conflict of interest. If we continued to operate under a TSO and continued to have to pay fines, all we are doing is funding the organization that is fining us. If that were me, I would go to jail – if I made a decision that affected me financially.”

“I believe we have to fight to keep the lagoon open for the long term, and that might mean we are going to lose it short term,” Diels added.

The lagoon receives 95,000 visitors annually and hosts hundreds of events, ranging from summer camps to the city’s annual Fourth of July fireworks celebration and the annual Lobster Festival. Harbor and pier area businesses – especially nearby restaurants such as Ruby’s – are expected to take a significant financial hit with its closing.

“This is more than a recreational amenity,” Gin said. “It’s also an economic engine for the community.”

Council member urged residents to take up the fight. State representatives such as Assemblyman Ted Lieu have already been engaged in defending the lagoon. But Brand and Aspel – usually at political odds over harbor issues – both strongly encouraged public involvement. Already, a Facebook page titled “Save Seaside Lagoon” has been launched.

“This will be closed down next year and forever and ever,” Aspel said. “The gauntlet has been thrown down, and the citizens have got to get involved, because we can’t do this by ourselves.”

Witzansky offered to coordinate advocacy efforts and suggested citizens send letters directed to the water board to him at mike.witzansky@redondo.org. Mayor Mike Gin likewise offered to direct letters via Mike.Gin@redondo.org.

“It’s really in the public’s hands to get out there,” Brand said. ER