“Time is a Killer” – Not just time [TELEVISION REVIEW] 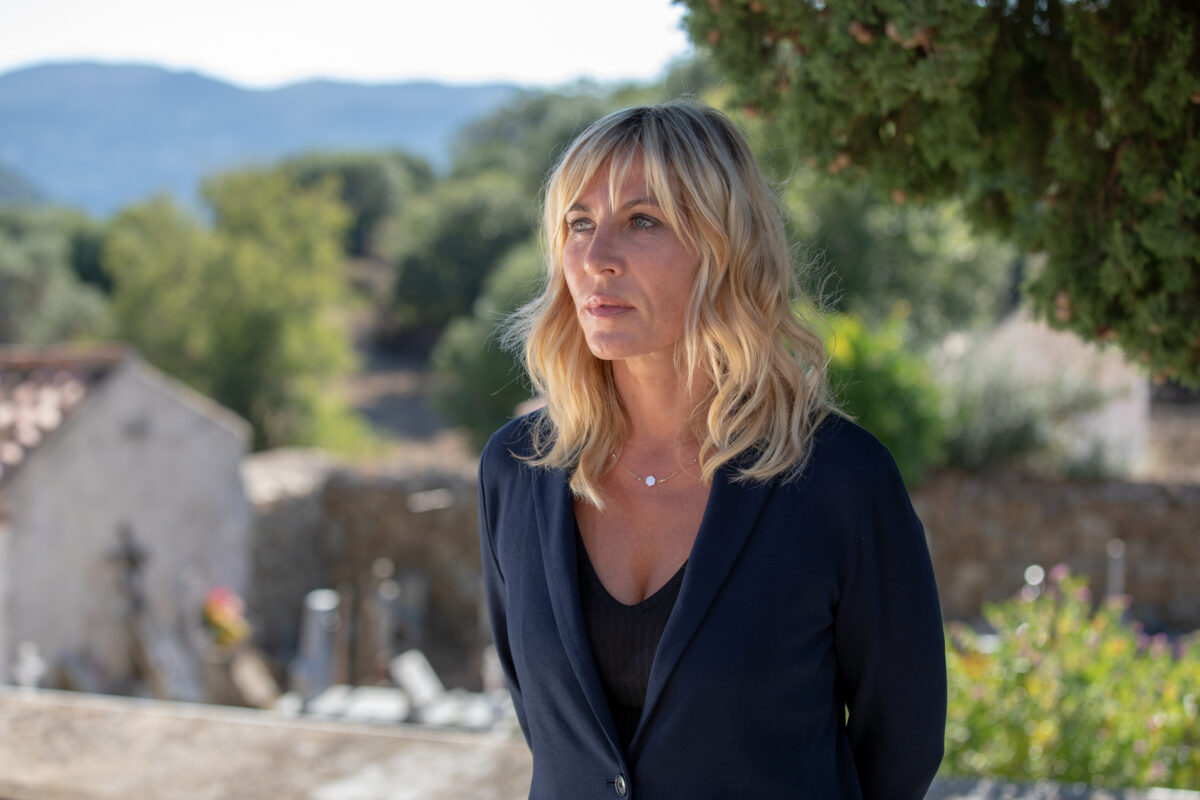 Mathilde Seigner as Clotilde in "Time is a Killer." Photo courtesy of MHz Choice.

Fasten your seat belts and suspend belief because “Time is a Killer” (“Le temps est assassin”) will have you on a psychological tilt-a-whirl of thrills, spills, and mystery.

After many years away, Clotilde Baron has returned to Corsica, ancestral home of her father Paul Idrissi, son of Cassanu Idrissi, a leader of one of the major clans on the island. Corsican clans, like those of Sicily, are a tightknit group of landowners associated with a mafia-like organization. Twenty-five years ago her father, mother Palma, and brother Nico were killed in a tragic car accident. Clotilde was the only survivor. Now a successful lawyer in Paris with a devoted husband, Franck, and a beautiful teenage daughter, Valentine, she has decided to face her demons and explore what really happened that fateful summer.

The eight episode series goes back and forth between present day and the summer of the accident in August 1994, exploring the psyches of all concerned as well as the convenient memory losses of the people still living in the village.

Corsica was an idyllic spot for almost everyone. The Idrissi children spent their summers there with their father and grandparents. Their mother Palma has agreed to return for the first time since her marriage to spend precious time together with the family. Palma, an Italian, has always been viewed as the foreign siren who lured Paul away from the island of his destiny and his fiancée, the exotic, wild, and unstable Salomé.

Over the past few years, Paul, an architect now living in Nice, has been returning to Corsica to work on a major hotel project. Paul is desperate for a success, having failed on other mainland projects in the recent past, and was hired primarily to keep his stubborn and powerful father Cassanu at bay. But Cassanu is adamant that no hotel be built on his part of the island and he is able to stop it through his connections, both legal and otherwise. Paul’s partners stand to lose massive amounts of money and he’s been given an ultimatum. “Get your father to back off or else.” Things become increasingly more difficult for him when his father refuses to cooperate.

Palma is still loathed by her in-laws who undermine and denigrate her at every turn. Cassanu is still determined that Paul leave her and return to Salomé and his rightful place in the clan. When Clotilde thinks back to that summer of tragedy in 1994, her memories are awakened.

Nico and his friends Mika, Stephane, Aurélie, and Cervone hoped to become the backup band for Maria Chiara, a touring singer. Clotilde has a school-girl crush on a local guide, Natale, who only has eyes for her unhappy mother. Palma discovers that Paul has been lying to her about, well, just about everything in his life. And Salomé, after almost 20 years, is as determined as ever to get Paul back and will stop at nothing to eliminate Palma from the equation. 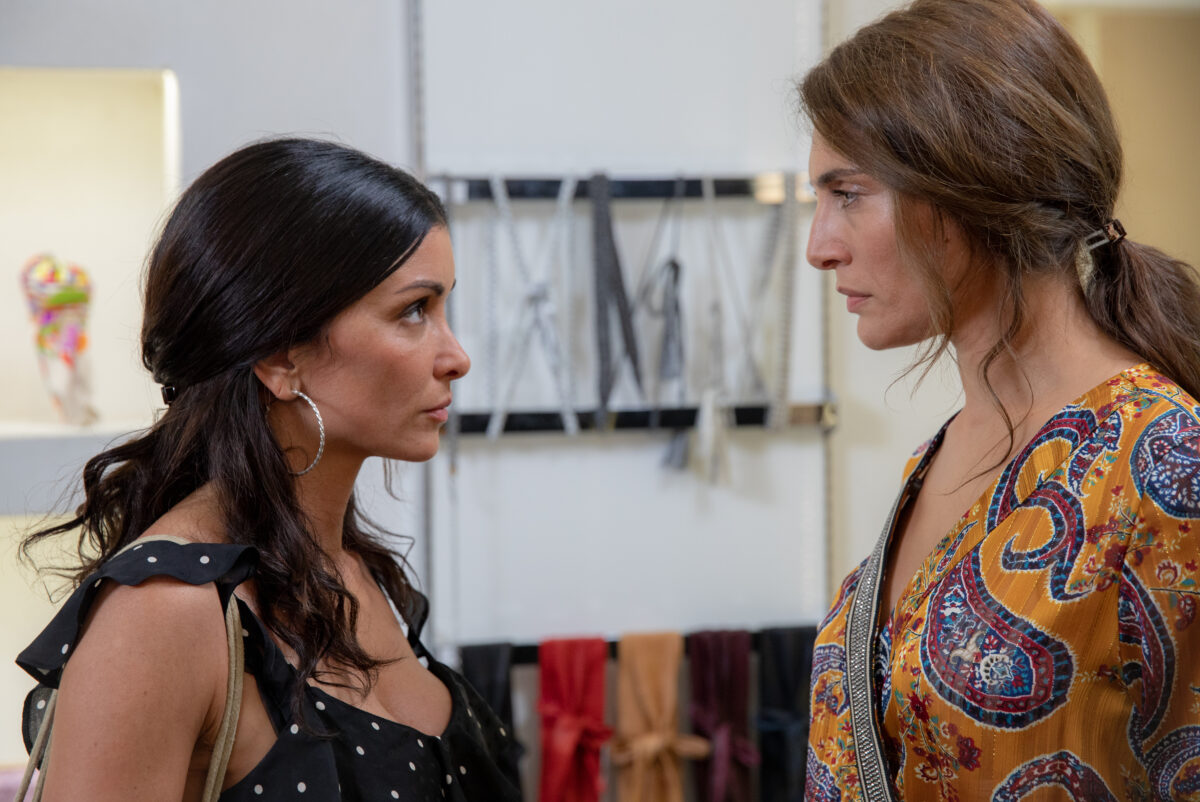 Jenifer Bartoli as Salomé and Caterina Murino as Palma in “Time is a Killer.” Photo courtesy of MHz Choice.

The adult Clotilde’s return to Corsica for the first time since the deaths of her entire family has triggered a series of lethal events. Unable to shake the feeling that the car crash was not an accident, she discovers that the now-retired police chief, César, felt the same way and pursued a separate investigation on his own.

As she continues to follow her instincts, Clotilde is almost run down and an attempt is made on her daughter’s life. Valentine, rock climbing, plummeted into the sea when her harness “broke.” Luckily she was rescued by Orsu, the town “imbecile.”

Stéphane, one of Nico’s friends and the son of César, now leads the police department and begins to track the so-called unfortunate incidents. Not only was Valentine’s harness cut but his own father was murdered by someone trying to make it look like suicide. Things really heat up for Clotilde when an anonymous letter is delivered to her that is in her mother’s handwriting.

But her mother’s dead, isn’t she?

You’ll have to watch all pot-boiling eight episodes to unravel what happened then and what is happening now to get some answers. Yes, it’s a soap opera filled with beautiful people and landscapes, but like the car crash at the center of this mystery-thriller you won’t be able to take your eyes off the action. Just go with this psycho-drama for the roller coaster of emotions packed into this series with enough believable red herrings to fill an hors d’oeuvres platter.

The acting is excellent, led by the fantastic Mathilde Seigner as Clotilde. Seigner is our guide into the abyss of incredulity but her ability to convey confusion, alarm, and borderline psychosis makes the series work. Grégory Fitoussi (“Spiral”) as Paul, her father, portrays moral ambiguity, deception, and sincerity so well that the viewer is constantly trying to gauge what’s true and what isn’t. Is he the loving father and husband, or are his betrayals second nature? Caterina Murino is the beautiful Palma in mortal combat against the evil Salomé played deliciously by Jenifer Bartoli. The very handsome Stanley Weber (“Outlander”) plays Natale as the perfect soap opera hunk with just the right touch of superficiality seasoned with soulfulness. All of the actors, both young and old, are convincing. Credible but sadly underused is Thierry Godard (“Spiral,” “A Village in France”) as Clotilde’s supportive husband Franck Baron. He’s capable of so much more than he was given.

The writers of each episode, led by head writer Franck Ollivier working from the novel by Michel Bussi, keep you guessing and Claude-Michel Rome, the director, keeps things moving at a fast enough pace making it easy for the viewer to suspend belief when things take a turn toward the bizarre, as they are wont to do. Special mention should be given to Alain Ducousset, the cinematographer who captures the stunning, saturated beauty of Corsica.