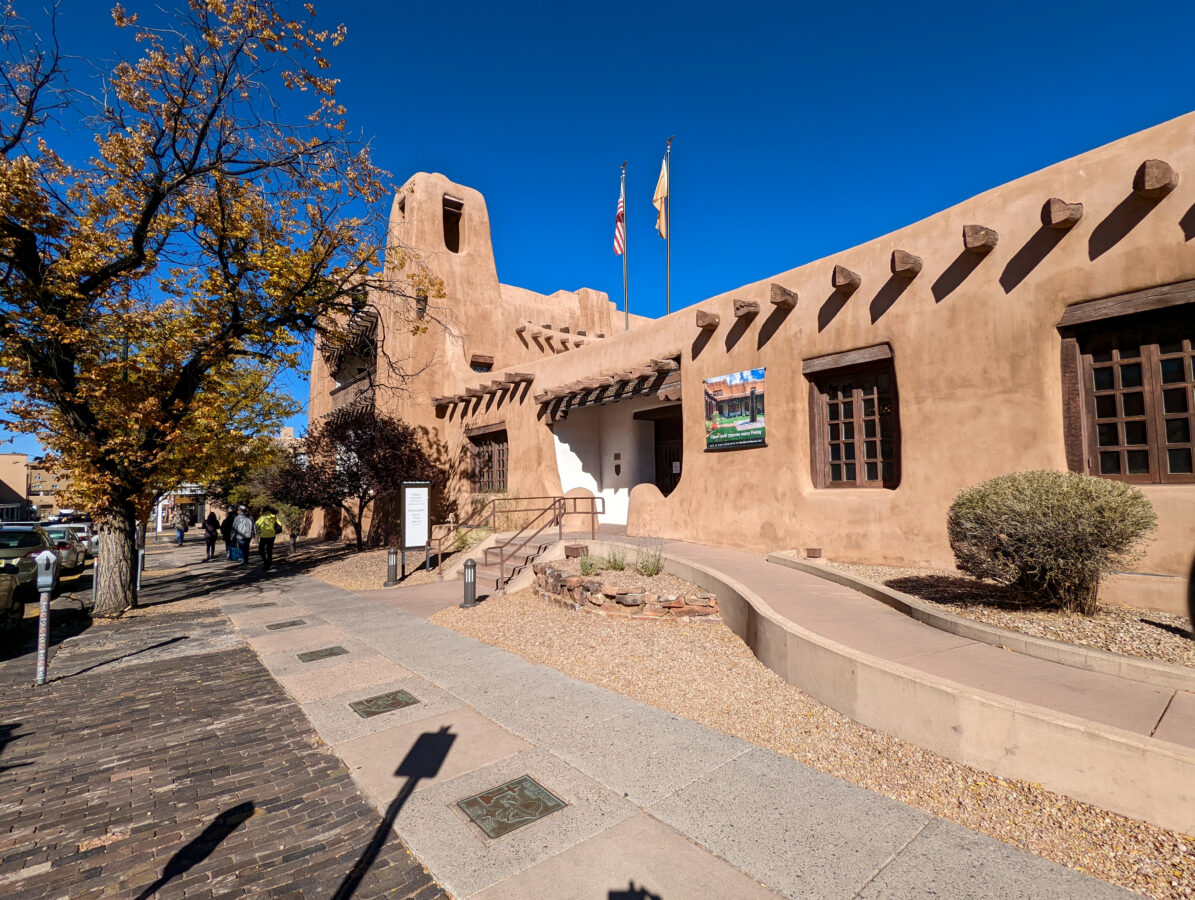 With Omicron on the way out, mask mandates being pulled back and warmer temps coming in many parts of the country, you may be looking for a great place for a Spring trip. May I suggest New Mexico?

I recently told you about my adventures in Pie Town, Taos and Bosque Del Apache. Today we conclude the New Mexico series with a stop in the capital city of Santa Fe, where the average high temps in March is 55 degrees, with 63 degrees in April.

It’s an easy 90-minute plane ride from LAX to Albuquerque, then a 1-hour drive north in your rental car. If you’re adventurous and enjoy the open road like me, you can get there in about 12 hours. Suggested route: the South Bay to Flagstaff, AZ will take you about 7.5 hours on the first day, and you’ll get to experience some great desert towns like Oatman, Kingman and Seligman on Route 66. Then for day 2, it’s Gallup, New Mexico and another 5.5 hours to Santa Fe.

In Santa Fe you’ll get a little warmth and a visit to what resident Noah Lopez told me was an “theme park” like experience of adobes everywhere you look, along with great art, historic churches, the USA’s oldest state capital, museums, amazing food, chilis hanging everywhere you look and more.

To photographer Nevada Wier, it’s just simply the inspiration. “It’s an art town. You come here for the air and the art. You’re breathing in this fantastic 7,000 feet rarified air, and then everywhere you look, on every street, there’s some form of art.

Please watch the latest #PhotowalksTV episode below to experience all about Santa Fe, and hear from locals like Lopez, Julie Crabill and Wier as well as restaurant owners Benina and Joaquin Quintana of Casa Chimayo. They all talk about what makes “The City Different,” such a cool place.

To why it gets that monicker? Try a city formed by a a mix of so many different cultures — Spanish, Mexican, Indigenous, and Wild West.

A few tidbits: start with some amazing history. The Palace of Governors buildings, which flanks the historic town square in Santa Fe is “the oldest public building in continuous use” dating back to 1610. That’s pre-Revolutionary War, for you non history buffs.

Meanwhile, the San Miguel Mission, just a few blocks from the plaza, proclaims that it’s the oldest church in the U.S., also dating back to the 1600s, but its present building is circa 1710. Quite a few decades before 1776. 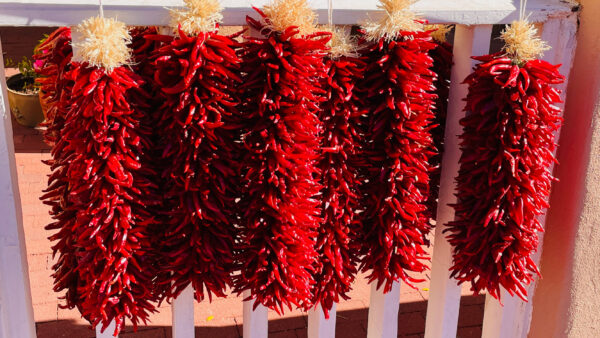 Santa Fe from the PhotowalksTV series

And then there’s the state capital. Start with Santa Fe’s status as the oldest in the country, dating back to Spanish times, and a building that’s “the only round capitol building in the country,” per the state.

If you’ve watched “Breaking Bad” and “Better Call Saul,” you know that the co-star of the shows are the rich desert landscape of New Mexico. The shows were made in Albuquerque, about an hour away, but they’ve occasionally ventured north to Santa Fe, most noticeably when Bob Oldenkirk’s character Jimmy took a job he hated in the capital city. (Sidenote: “Saul” just wrapped production of the show, after 6 seasons, Friday. Please Vince Gilligan, one more New Mexico series. How about a series based on Kim next time?) 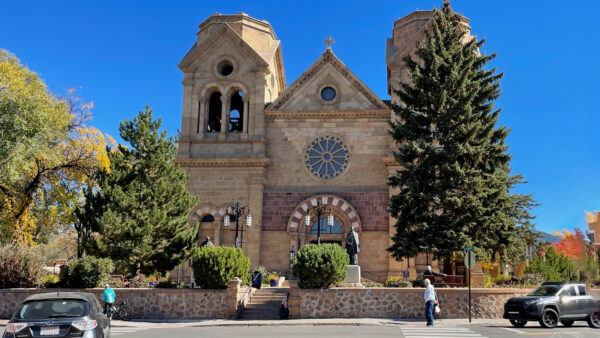 We loved our location when we visited—just a few blocks from the Plaza, at the Santa Fe Motel on Cerrillos Road. The rooms were nicely southwest decorated and comfy, and again, the location can’t be beat. 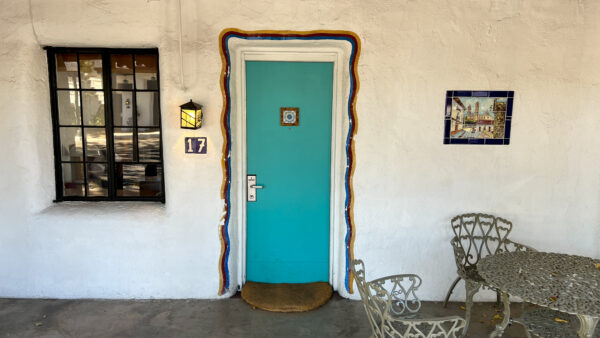 There’s not a lot of parking in the Plaza, and besides, you see so much more when you walk. Further down the road, but too far away to stroll to the Plaza is the El Rey Court, a 1950s styled motor court that suits my tastes to a T. You expect to see Thunderbirds and convertible Mustangs parked in front of the rooms. 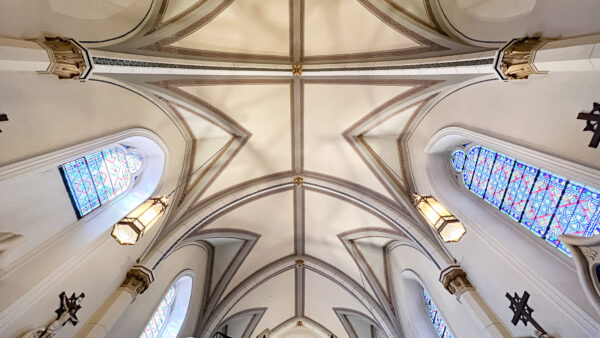 Loretto Chapel in Santa Fe by Jefferson Graham for the PhotowalksTV

Where not to? Any place you visit is going to have some of the best (New) Mexican fare you’ve ever experienced in your life! You can read more details in Ruth’s RuthTalksFood “Tasting New Mexico” report.

We particularly loved the home cooking at Casa Chimayo where we shared the Blue Corn Huarache plate and had a long chat with the Quintanas, the owners/chefs, about New Mexico food and why it’s so special.

“You go to Paris for wine. You come to New Mexico for chiles,” Benina said.

Perhaps that’s why you see the chile ristras hanging everywhere you look in town. 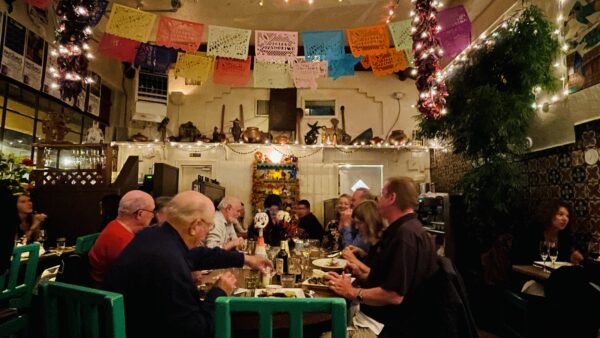 Cafe Pasquale in Santa Fe by Jefferson Graham for PhotowalksTV

Two other restaurants we really liked: The Plaza Cafe, right there on the Plaza, is another classic, the oldest restaurant in Santa Fe, circa 1905. I skipped the Grilled Cheese sandwich and had a terrific plate of Blue Corn Enchiladas and had a tortilla burger at the Pantry. The other (big) highlight was Cafe Pasqual’s, where Ruth enjoyed mole-topped chicken enchilada plate with jicama salad and cilantro rice, while I was satisfied with the plate of amazing cornbread with green chiles and corn. It was so great, I’d drive back over again tomorrow just for the cornbread!

For a more detailed look at the food scene, try Eater’s take.

Walk around and photograph! You know? Move those legs and find yourself surrounded by inspiring adobe buildings, great art, the smells, the light. Catch the video for more tips on that! 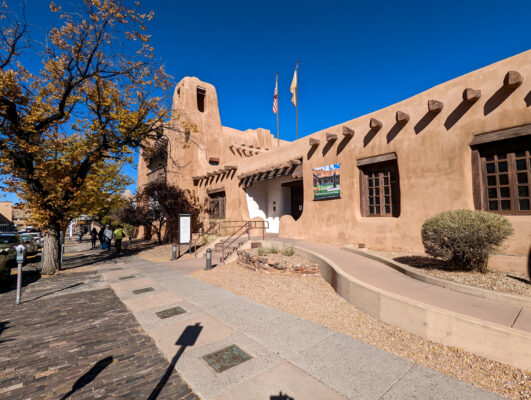 To my pal Scott Bourne, who I spent time with at Bosque Del Apache photographing birds, it’s the Georgia O’Keefe museum, and seeing the amazing work of the former New Mexico resident in one place. For my wife Ruth, it’s just the food culture.

While my stomach remembers the cornbread, of course for me, highlights are going to be photographic. Walking up the hill to the Martyrs of the Cross for sunset, arriving early to photograph the the miracle staircase at Loretto Chapel before the crowds arrived, lying on my back on the floor and looking up to capture the entire round dome of the state capital?

Yes to all, but my highlight is pretty simple: just being in Santa Fe, seeing, smelling, experiencing the City Different streets and snapping away when inspiration hit. Which was pretty often!

And that’s a wrap for our four-part series on the Land of Enchantment. If you haven’t caught them already, please also check out:

I can’t wait to go back and visit more of the state: White Sands National Park, Truth or Consequences, Roswell, the Carlsbad Caverns and New Mexico’s Las Vegas top my to-do list. So much there!

Finally: where would you like see PhotowalksTV go in April? We’ve got some California episodes planned in March, but the following month is an open book. I’d love to hear your suggestions! E-mail me!