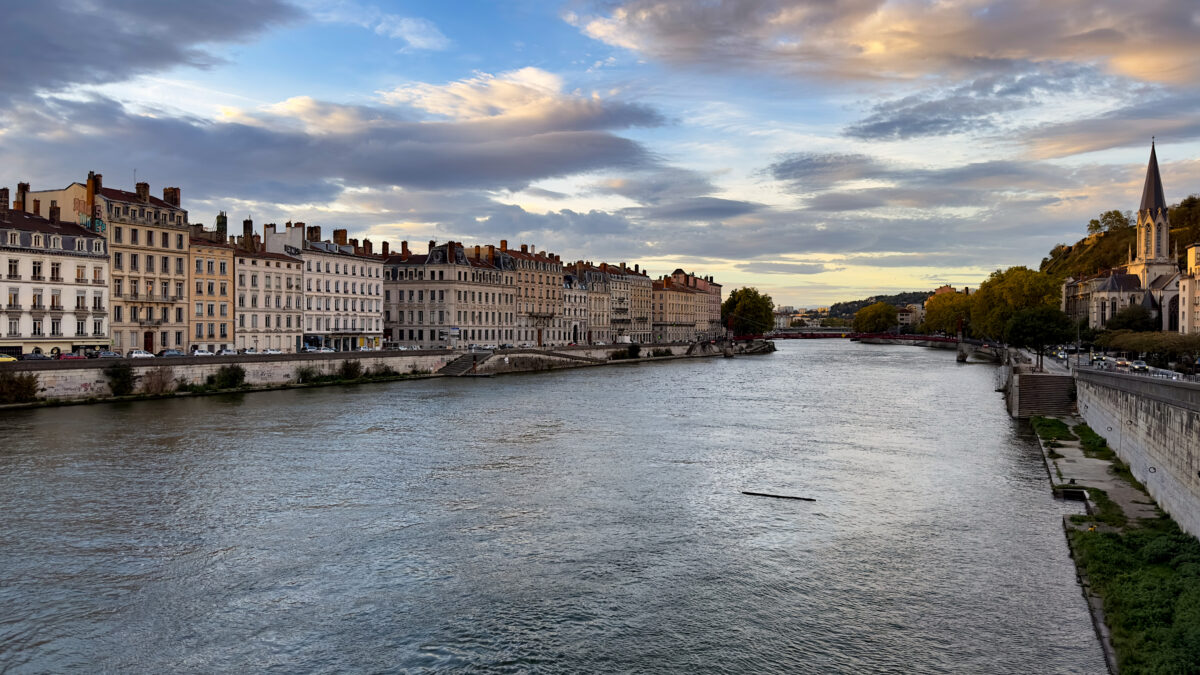 Lyon, France. The new part of the city is on the left, and the old is on the right. Photo by Jefferson Graham for the PhotowalksTV series

Lyon, France isn’t usually a must stop for those who visit Paris, and then perhaps venture out to Cannes, Versailles and the Provence area as well. But it should be.

Lyon, a two hour train ride from Paris and nearby the Alps and Swiss border, ranks as the third largest city in France (after Paris and Marseilles) and is “more calm” than Paris, noted Katherine Torres, a 4-year Lyon resident, in her interview with me for the PhotowalksTV series. “It’s quite smaller….and you can do some amazing walking.”

She speaks my language! 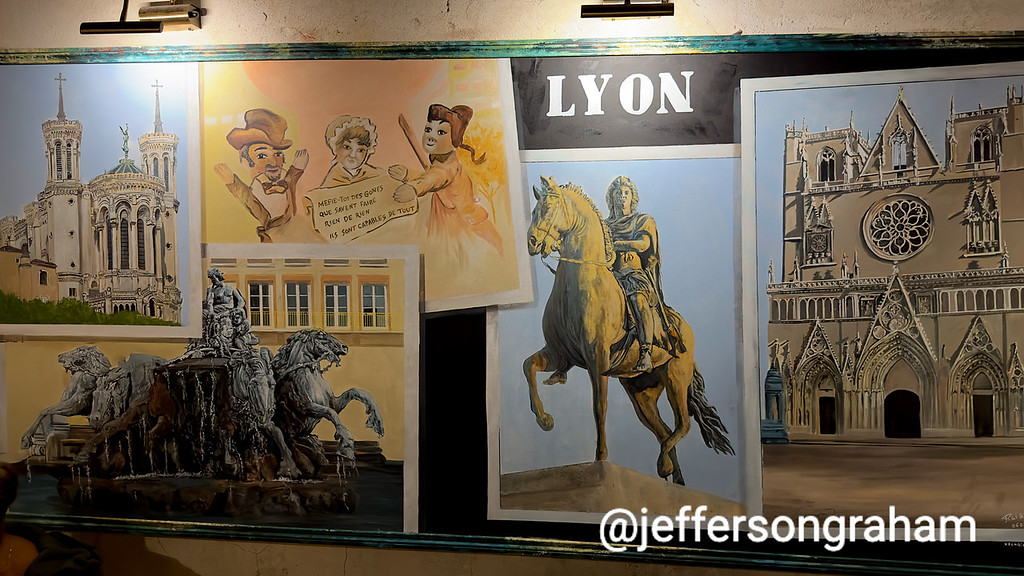 Per Frommer’s visiting Lyon will give you “a more authentic taste of what French life is really like.”

Yes, there’s a new part to the 2,000 year-old city, and it’s cosmopolitan, and full of big buildings and large plazas, and that’s cool.

And the old town, or Vieux Lyon, as it’s called? That will show you what French life was like, once upon a time.

With the little alleys, secret walkways and lonely streets, this is the area Katherine was talking about when she mentioned the walking paradise that is Lyon. You can see for yourself in the latest PhotowalksTV episode, which was filmed on the iPhone 14 Pro Max and Insta360 X3 cameras.

You don’t need a map or directions to play along. Just cross the river from the New part of town to “Vieux Lyon,”, which is like stepping into a time machine that just happens to be chock full of amazing French cafes, bistros, gelato parlors and so much eye candy. 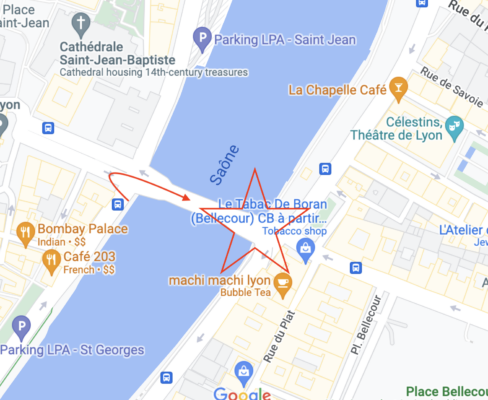 How to get there? Just cross the street from Old Town on one of the bridges. If you take the bridge by the tobacco shop, it will lead you directly to the historic (everything over here is) St. Jean cathedral, which will in turn lead you to Rue St. Jean, the old street that’s full of fun shops, those secret alleys, a puppet museum and all those bouchons. 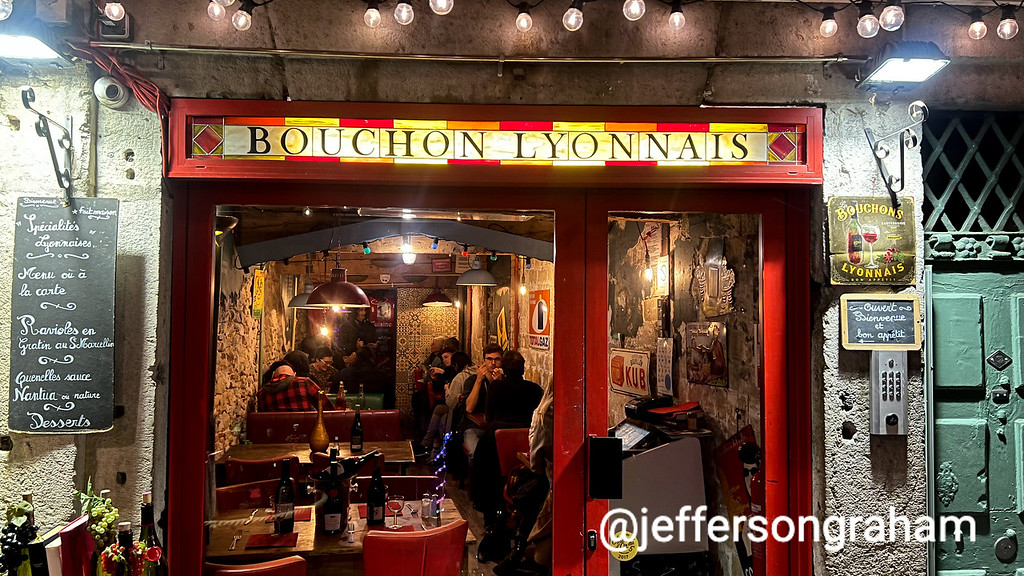 The bouchon: a homey restaurant serving local fare, a place where you get to know your neighbors.

My wife Ruth (subscribe to her newsletter please) describes the fare this way: “meat-centric eateries serving the traditional food of the city, such as Salade Lyonnaise, foie gras, and breaded tripe (tablier de sapeur). I didn’t attempt the tripe but tried a dinner of sausage in a red wine sauce with creamy potatoes that was quite good, especially the potatoes and the dessert, a rose-tinted praline tart that’s a regional specialty.”

Vieux Lyon highlights begin with St. Jean cathedral, which begun in 1180 and got completed in 1476. It’s a big gothic church on a plaza that must be seen.

As you walk down Rue St. John, you’ll pass all sorts of shops and homes. Many of the homes lead to alleys, or “Traboules.” They were said to be built way back when so merchants could get around Lyon without being seen. Some 40 of the passageways are open to the public, and clearly marked with a small identifying seal.

Inside the passageway you’ll find homes, courtyards, gardens, and a fun escape away from the huge crowds that can descend upon St. Jean Street.

There are two ways to explore the area. In the middle of the day with the tourists, or early in the morning, when you’ll have the main streets and sidestreets to your self. I think you know which method I prefer.

The other must stop in Vieux Lyon is climbing to the top of the hill, and seeing another amazing church that dominates the skyline.

The Basilica of Notre-Dame de Fourvière started construction in 1872, so it’s relatively newer, but a stunner, and it leads to a wonderful mountain overlook of the city.

If you don’t feel like climbing the steep steps, you can jump on the Metro and take the Funicular to Fourvière Hill. You catch it right there on Rue St. Jean and it’s a fun ride.

Make sure you check out Lyon on your next French visit and let me know how you enjoyed it.

For more photos, check out my Lyon gallery on my website.

And if you haven’t watched them yet, please check out my five-part video series from Paris on the PhotowalksTV channel.