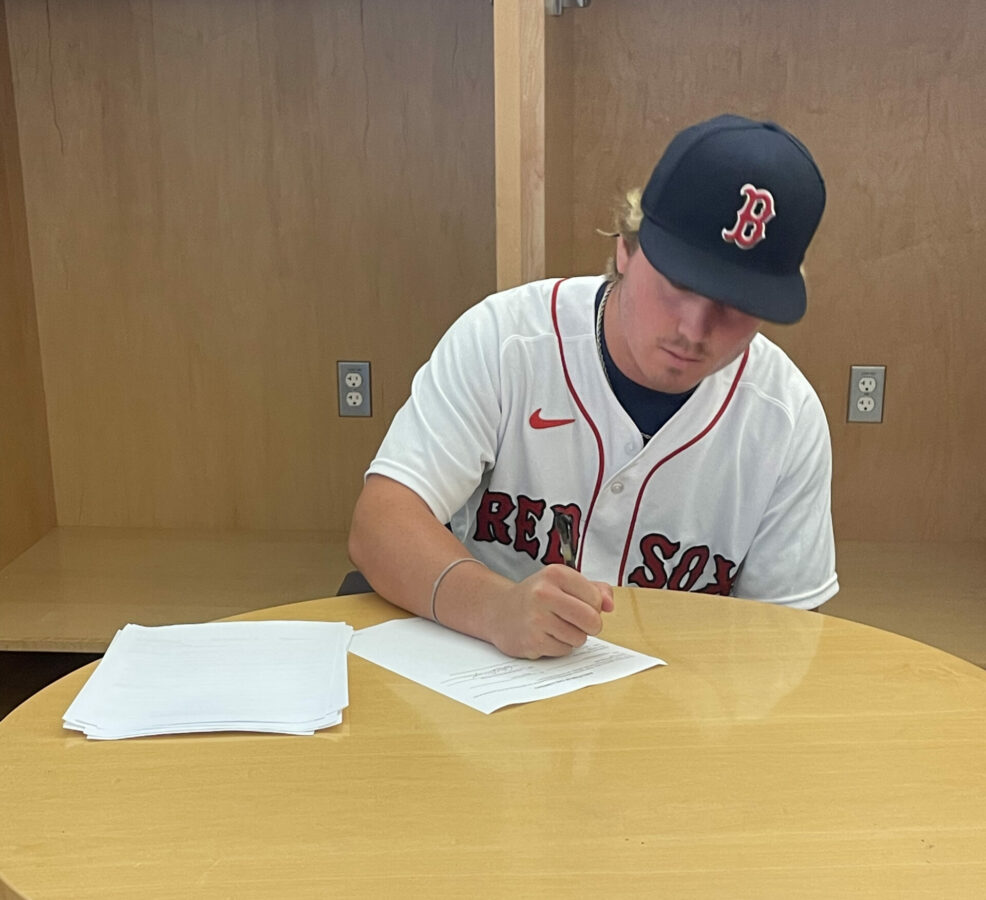 Chase Meidroth has dreamt about this moment for most of his 21 years. It began with T-Ball, then started coming into focus in Manhattan Beach Little League. By the time he was a star infielder for the Mira Costa Mustangs, the dream had become clear. He wanted to be a professional baseball player.

On August 10, when Meidroth stepped up to the plate during the first inning of his first game as a pro, playing for the Boston Red Sox “Low A” minor league team, the Salem Red Sox, Meidroth made that dream a reality. But what he did next stunned everybody. He ripped the first pitch he saw over the left field fence, launching his professional career with a home run. 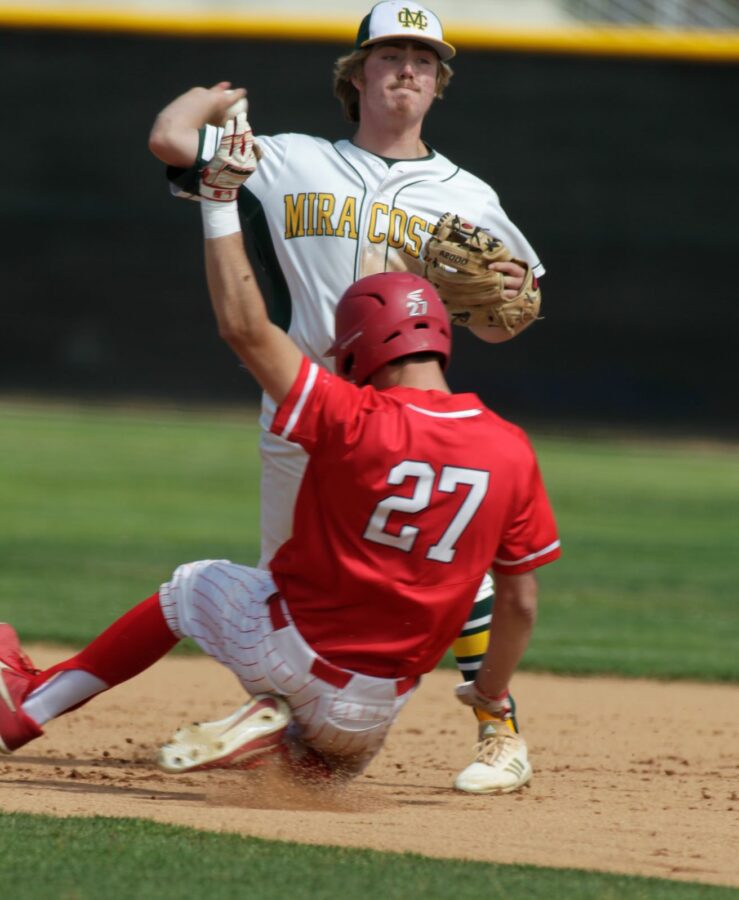 Infiedler Chase  Meidroff was drafted by the Boston Red Sox. He is pictured during a victorious game over the Redondo Sea Hawks in April 2019. Photos by Ray Vidal

“His first swing,“ said Greg Meidroth, Chase’s father, who was watching the game online from Manhattan Beach. “It’s been quite a ride.”

Chase has not let up since. In his first two weeks as a pro, he has hit a stellar .326, with two home runs and an extraordinary .474 On Base Percentage (meaning he’s gotten on base nearly half of his at bats). He’s also flashed leather on defense. On Tuesday, he made a flashy behind-the-back toss to start a double play —  a play that made ESPN’s nightly “Top Ten” best plays made that day in all of baseball.

“Put some music to that one!” the Red Sox play-by-play announcer intoned after Meidroth’s throw.

Meidroth is on the radar of Red Sox nation, among the more avid fanbases in all dof sports. Hunter Noll, who covers the Sox for the Fansided “BoSox Injection” site, wrote about Meidroth’s pretty swing and projected a major league future.

“At Fenway, he would be putting plenty of dents in the Green Monster,” he wrote. “…Chase Meidroth is here, and he’s not wasting time with pleasantries – he’s just going to keep hitting.” 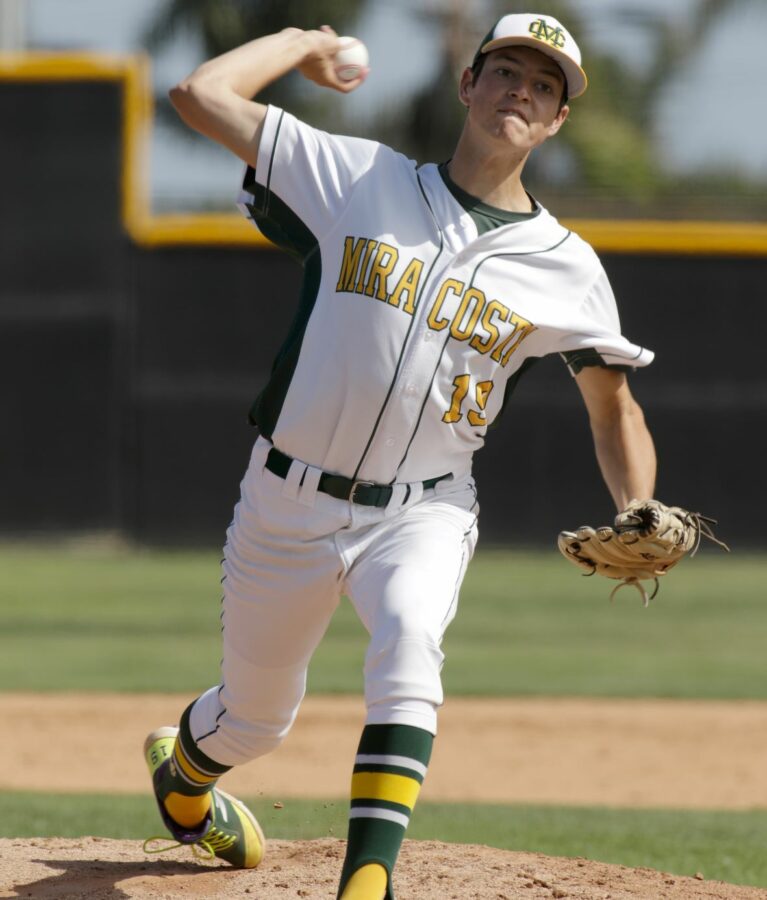 Pitcher Jared Karros, son of former Los Angeles Dodger star Eric Karros, was drafted by the Dodgers. Karros is pictured in a victorious game against the Redondo Sea Hawks in April 2019. Photo by Ray Vidal

Karros is a 6-foot-7 pitcher who likely would have been selected much higher if he’d not been injured for his past two seasons at UCLA. He was a star pitcher for the Bruins when healthy, pitching their opening day games.

The son of Dodgers legend Eric Karros told the LA Times he was glad the Dodgers were the team that drafted him, not just because of his father’s history with the organization but also because the team is known for its development of pitchers.

“It’s definitely pretty awesome, just with them being the local team. I grew up watching them, rooting for them, going to games,” Jared said. “But there’s more than that. With their development and their organization, it’s more than just the local team that I rooted for. It’s an organization that’s going to give me the best opportunity to help further my career.”

UCLA coach John Savage told the Times the Dodgers are getting a steal.

“​​It’s just a matter of building up and making sure he gets stronger,” Savage said. “They might be surprised with how good he is.”

Greg Meidroth said Chase and Eric, inseparable for most of their childhood, are beyond stoked that they were selected in the same MLB draft.

Chase was at home for the draft, just father and son, waiting to hear the Meidroth name announced. Chase, furiously checking his phone for texts from his agent and many baseball friends, had already agreed to a deal with the Red Sox and hadn’t told his father. He walked nonchalantly into the kitchen, where his father was watching the draft, just before his name was announced.

“It was just, ‘Holy cow, this has happened,’” Greg recalled. “You go through tears of excitement and joy. It’s really the coolest thing, just a kid from Manhattan Beach, always playing sports around here, and he was able to get drafted in the fourth round by the Red Sox.” ER