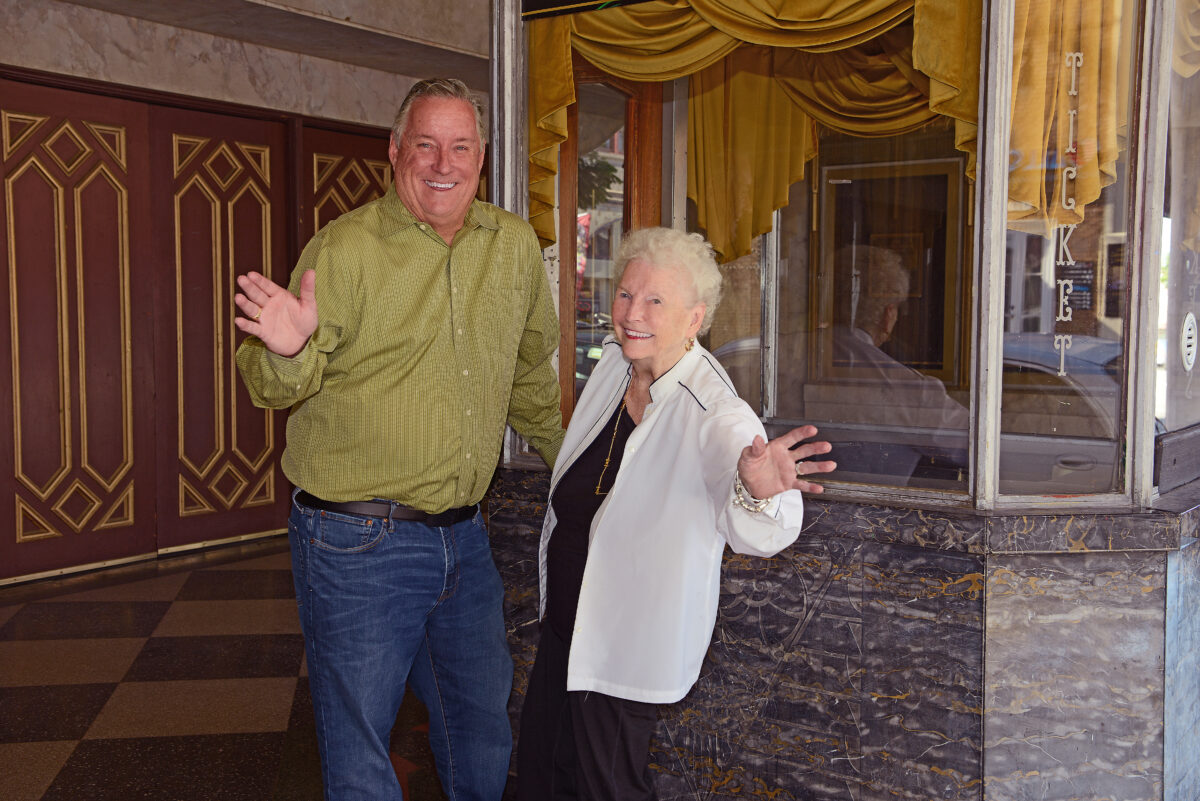 The Grand Vision of James and Pat Brown

The Grand Vision Foundation periodically honors supporters of the arts, and for this year’s gala at the PV Golf Club they chose a duo whose contributions are very different. One is a veteran photojournalist, the other owns a downtown San Pedro restaurant, bar, and brewery. They might not seem to have any connection, but there is a big one – they’re mother and son.

Pat Brown and her late husband Frank covered local arts events at Peninsula News for decades. Their son, James, owns San Pedro Brewing, which opened in 1999. San Pedro Brewing is just down the block from the Warner Grand Theater, and the Browns earned recognition for the support they have given toward making that historic theater the center of San Pedro’s performing arts scene.

The Warner Grand was built in 1931 and is one of the least-changed Art Deco movie palaces in California. Taran Schindler, who is Artistic Director and Deputy Director of the Grand Vision Foundation, gave some background on the group, the theater, and the Brown family’s support.

“Grand Vision was founded in 1996, with the sole purpose of saving the Warner Grand Theatre, which at the time was a derelict building owned by a group of concerned citizens in town. They recognized that the theater could be a key for uplifting the community, and revitalizing our cultural core. They arranged for the City of Los Angeles to purchase the building, and soon afterward founded Grand Vision to provide marketing support, advocacy at city council, and to raise money for an historic restoration. 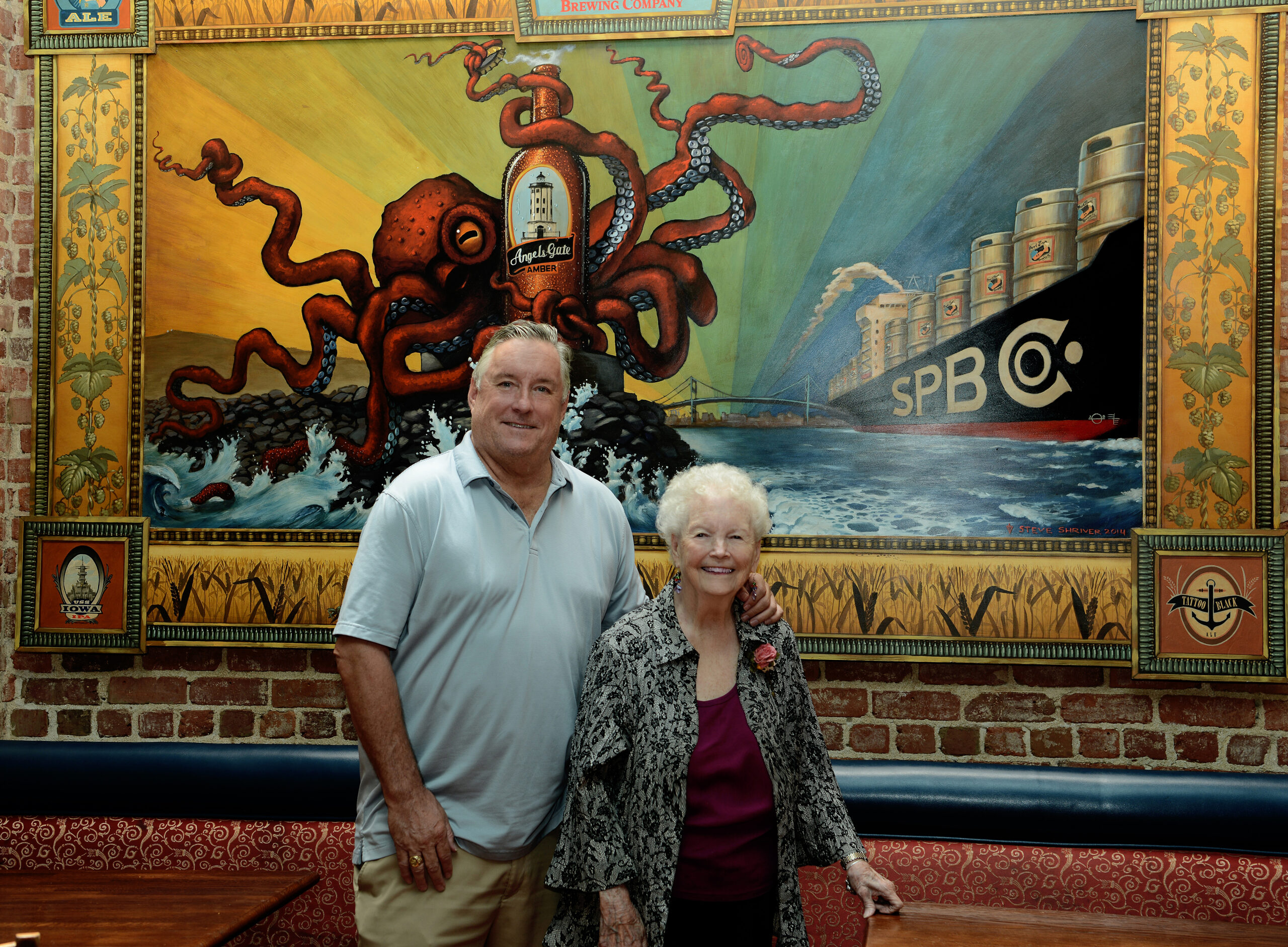 “In 2007, we had a capital campaign called Save Your Seat,which brought together community members who had incredible memories and deep nostalgia for the place. It was where local people met and married, where as a child they sat all Saturday afternoon, watching movie after movie. People adopted seats, they adopted rows, and we raised a lot of money to bring the theater back to a viable state.”

Now that they had the theater in shape for productions, it was time to fill that space with programs and audiences. The Grand Vision Foundation had two problems, which Taran put succinctly.

“The building wasn’t ready, but even more so, the community wasn’t ready. How do you fill a giant theater when the neighborhood has a reputation of being not the safest place? In the ‘50s and ‘60s, this was a sailor town with some rough areas, and though San Pedro had changed, a lot of people outside the community still thought of it that way.

Some groups stepped up and started productions, among them the Golden State Pops Orchestra, the San Pedro Ballet, and Rolling Hills Prep’s music productions. They brought programs to the theater, despite the challenge of building an audience.”

Two people who often attended those programs were a couple who didn’t actually live in San Pedro: Pat and Frank Brown. Frank was an Air Force veteran who moved his family wherever he was deployed – three of their six children were born in France. They had most recently lived near the Pentagon in Virginia before Frank left the service in 1991, and they moved to Palos Verdes so he could study for his master’s degree at USC. Pat says that their career and connection to the community were cemented by a chance meeting at a social gathering.

“We were at a cocktail party and somebody told Frank there was an opening for a part time job at the Palos Verdes News. He was hired as the society editor, but we liked to say society with a small ‘s’. After about four months, he said, ‘You know, I think I need to do this full time, and I need Pat’s help.’ Frank did the writing and I took the photos, and it was a wonderful job. I got to meet everybody, see everything, do everything, and it was great.

“We covered everything on the Peninsula and in San Pedro. Twenty years ago, I don’t think a lot of people knew about San Pedro, because there wasn’t a lot of culture, except for the Warner Grand Theater. We went there to cover some things, and it’s been a love affair ever since because we love San Pedro.” 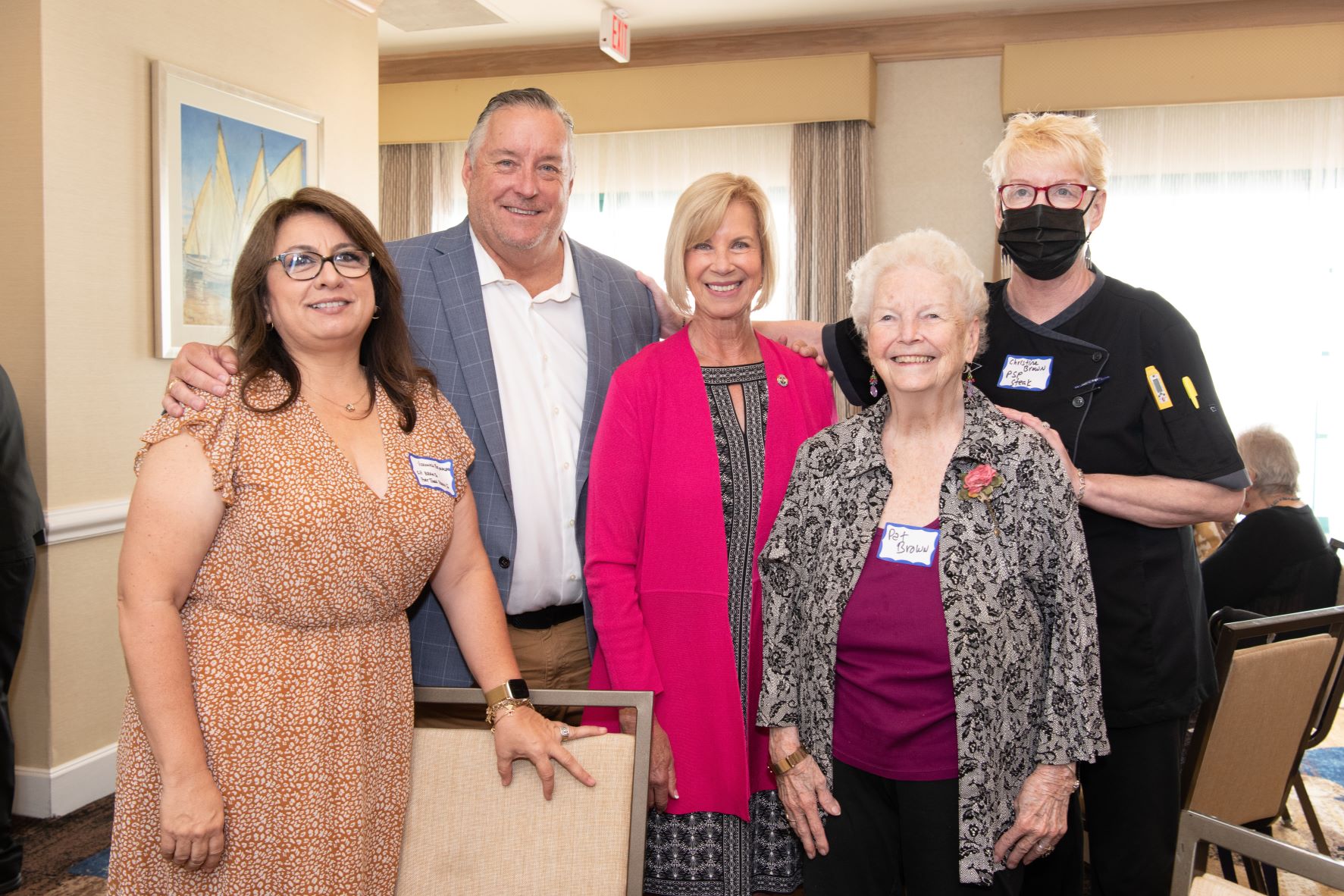 Taran at the Grand Vision Foundation said the Browns’ appreciation for the theater and community was all the more influential because they didn’t make a big deal of it.

“Pat and Frank never batted an eye, and covered Warner Grand Theater programs as they would any event. They simply incorporated them into their society pages, and around town happenings, and were at the forefront of changing the vibe. Here was a well-respected couple who had been writing for the community for so long, saying it’s a good idea to go down and have a cultural experience in San Pedro. And that was our relationship with the Browns from the beginning. There was no fanfare about the process, they just judged the quality of the programs as on a level with the best other options in the area.”

“Pat is a connector of people, a networker. She is incredibly effective at getting people to talk to each other. She had a sense of who to speak to on the Hill, and encouraged individuals to attend concerts. She interacted socially with the friends group of the Norris Theatre, called the Act Two Group, and the vibe spread to them — ‘Oh, we can find experiences down the hill.’ Multiply that by a thousand casual conversations with people who talked to other people. I hold her at the frontline of how we developed a PV audience.”

Pat described  how the Peninsula and San Pedro changed over the years.

“I consider Palos Verdes a bedroom community, but I never think of San Pedro that way. Both have changed over the years, the Peninsula in particular with the growing Asian population. It may be partly in response to that change that the programs at the Warner Grand and the Grand Annex have become more diverse. About two weeks ago, I was at the Warner Grand Theatre and the whole evening was devoted to South Pacific music. I think that a few decades ago the local audience would have had little interest in a program like that. Even people with no connection to the cultures want to experience their arts.”

Another major change in San Pedro’s downtown has been the expanded options for dining and nightlife. San Pedro Brewing, which James Brown opened in 1999, has helped lead the charge. James had previously trotted the globe selling brewing equipment for a company based in the Czech Republic, but took the opportunity to settle down once the former John T’s Tavern became available. James cleaned it up, expanded into the former print shop next door, added an outdoor patio, and put in San Pedro’s first brewery. (Despite the area being inhabited for a century and a half by thirsty sailors and dockworkers, all the beer in town had previously been brewed elsewhere.)

James then turned his attention to the food, which had previously been undistinguished, and decided to improve it. He had a secret weapon when he did this – his sister Christine Brown was then running the award-winning Restaurant Christine’s. Christine helped the kitchen come up with signature pastas and salads to add to their menu of bar food. Between her inspirations and James’s instinct they developed a menu that helped them become a respected dining destination. James knows some people might think that a place called San Pedro Brewing would not be child-friendly, but says that after a look at the menu and environment, they usually come around.

“I know some may be a little off put by the name, but once they come in here, they understand that this is a restaurant. They see the families… One of the wonderful things about San Pedro is that it’s a rare town where multiple generations stayed here. Maybe grandma and grandpa worked on the docks, son did, daughter did, grandkids do. We’re really fortunate that we still see multiple generations coming into the restaurant for family meals, celebrations.”

In the decades he’s been in business, James has experimented with brewing a variety of beers, and he has one for anyone’s taste. Well, almost anyone – his mother Pat is an exception. “I think I’ve had maybe two beers in my life,” she said with a laugh. Luckily San Pedro Brewing also offers wine and cocktails, so if she doesn’t feel like a soft drink, she has options.

Running a popular business helps build a neighborhood, but other people are doing that too, and they haven’t been honored by the Grand Vision Foundation. What’s special about James? Taran Schindler says it’s because of his unwavering but quiet support.

“In 2004 we were beginning to produce our own fundraising events, at first for restoration projects, then a youth music education program, special projects, or programs here at the Grand Annex. We’ve always reached out to local restaurants for support and without fail, James has given us some sort of donation. When we didn’t know how to handle food at events, he was there with suggestions, and making sure we acquired the right things at the right time. Since then, several other establishments have shown themselves as very generous, as well. But I think James and the Brewing Company set the tone for that. With him it was not a competition, like ‘Look what I can do,’ but with the message ‘This is what you do to be a player in the community.’

When companies and individuals make big donations to nonprofits, they often demand that they receive highly visible recognition. While Taran notes that substantial donors are always thanked as part of programs, James has never asked for anything special.

“No strings attached, never with James. But then again, that was the same tone his parents Frank and Pat had set, never any fanfare about their support. It’s not like any of them did this to get their names in lights.”

Taran says that as supportive as James is of their programs, she doesn’t often see him in a theater seat enjoying them.

“He does that magical thing where he’s in many places at once, but he’s usually providing services. He’s in the hospitality business, after all, so he’s often busy when our events are scheduled.”

James confirmed that he doesn’t get away from the restaurant much, but when he does it’s often to attend a game at his alma mater, UCLA. He and Pat both attended the Gathering For The Grand, and family members flew in to enjoy their triumph. Interviewed before the event, James anticipated a welcome reunion. 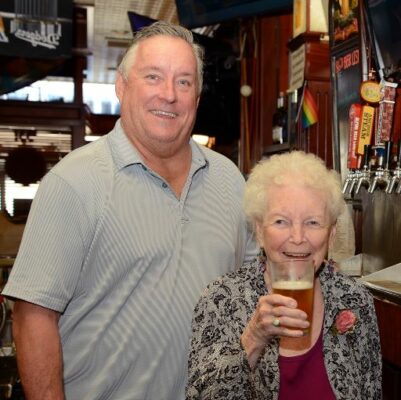 “There are four of my generation left. They’ll be coming in from DC and San Diego, and of course Christine will be there. We love to be together, and while they’re here we’ll also get around a table at San Pedro Brewing.”

They didn’t have to dress up for that dinner, but did for the Gathering For The Grand at the PV Golf Club. Pat liked the “An American in Paris’ ‘ theme, in which guests dress in black and while formal, while the more casually inclined James threatened to wear black shorts and a white polo shirt. “That’s how I’d be most comfortable, but I’ll wear a tux for a night,” he conceded. The Gathering for the Grand was a rare time in the spotlight for two people who have been most active and effective behind the scenes.

The Gathering For The Grand will be held at the Palos Verdes Golf Club on July 24th. Photos and a writeup of the event will be in next month’’s edition. Pen