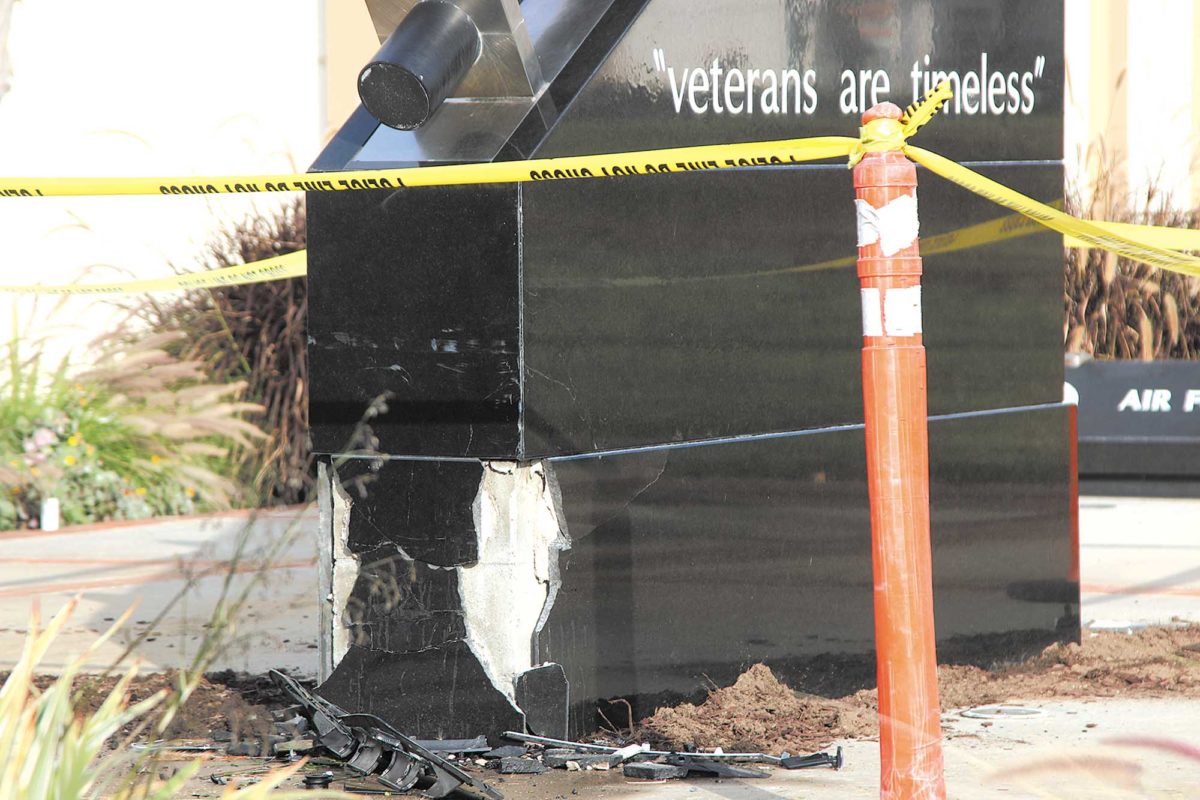 Two people were injured last week after driving a car into the Hermosa Beach Veterans Memorial at the Community Center.

The driver and a passenger were taken to a hospital for treatment of minor injuries sustained in the collision, which took place the evening of Jan. 15, said Sgt. Mick Gaglia of the Hermosa Beach Police Department.

The circumstances of the crash are under investigation, Gaglia said, but right now it appears it was “simply an accident.” The driver of the car, a man, told police he thought there may have been a mechanical failure.

The memorial, which sits amid grass on the community center lawn at least 20 feet from any roadway, suffered minor damage. The main structure, which supports a flag poll that acts as a gnomon in a functioning sundial, is made of cinder blocks surrounded by granite panels, with steel plates supporting the flag and an iron lightning rod running deep into the ground. The solid structure inflicted far more damage to the car, which was totaled, than it incurred. Some of the panels were chipped, but the one containing the memorial’s slogan, “Veterans are timeless,” was unharmed.

On Thursday morning after the accident, the memorial was surrounded by police tape. Two “Freedom Tree” memorial plaques that had been buried in the garden surrounding the structure had been uprooted. Two sets of tracks were visible, with one apparently indicating the path the car took to reach the memorial and the other indicating the route the tow truck took to remove the inoperable vehicle. One of the sets of tracks appeared to line up with the exit from the Arco gas station on the south side of 11th Street opposite the Community Center.

A man working at the South Bay Alano Club, which is across the street from the Community Center, said when he arrived for his shift the night of the crash, he saw authorities towing away the car. Other people at the club said that they often see drivers exiting the Arco station going very fast.

Steve Crecy, a resident who was part of the volunteer committee that built the Veterans Memorial, visited the scene early Thursday morning. He said he had contacted some of the firms that had handled original work on the structure, which marked its 25th Veterans Day in November, and was waiting for the okay from the city for the work to get underway.

Despite the structure’s relative distance away from any roadway, last week’s crash is at least the second time it has been hit by a car. More than a decade ago, Crecy recalled, it was hit by what he believes was a city vehicle doing maintenance work at the Community Center. As with last week’s crash, the car suffered more harm the memorial.