Fogo de Chão in El Segundo – Two restaurants in one 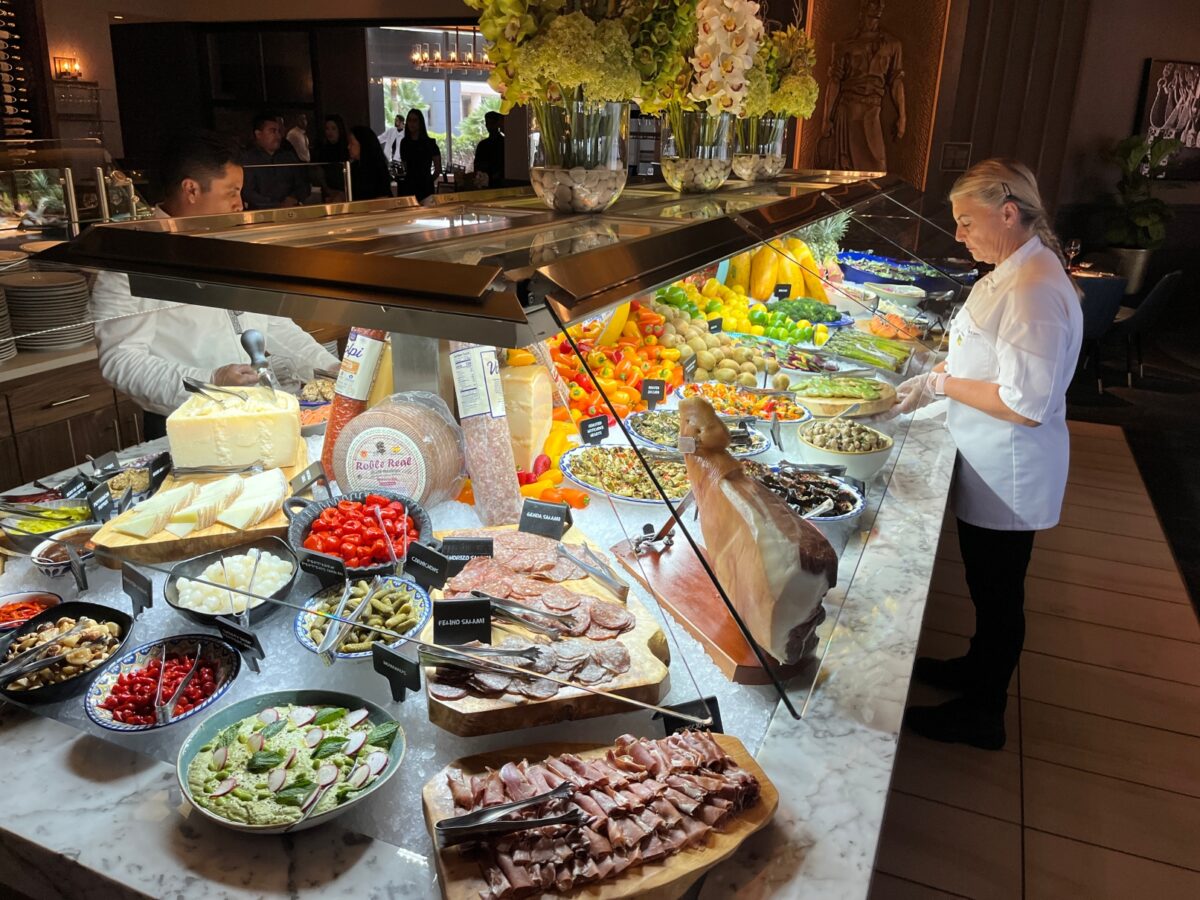 At fine tables in the 1800s, there were two competing models of how to make a meal special: Service Francais, where a table is set with all the ornamentally prepared dishes of a meal arranged so diners could admire them, and Service Russe, where servers bring each dish from the kitchen individually portioned for one person. Fans of the former praised the joy of seeing all the dishes presented so they could decide how much of each they wanted, and complained that waiters bringing individual plates was cheaply theatrical, a way of showing off how many servants you have. Those who preferred Service Russe pointed out that dishes delivered straight from the kitchen arrived hotter, and there was no jostling as diners tried to get items they liked that had not been placed close to where they were seated.

We all know which style became dominant, though Service Francais continued at formal banquets into the 1920s. Elaborate buffets survive aboard cruise ships, at weddings, and hotel brunches, but this style of dining is usually relegated to more downscale affairs.

There is one place in the South Bay that offers both types of service with high style: the newly opened Fogo de Chão. Though people usually think of Brazilian churrascarias as barbecue-focused restaurants that happen to serve side dishes, the market table buffet makes it a destination for omnivores and vegetarians. On any given day there will be over 30 salads, vegetable dishes, cheeses, soup, and cold cuts. Some are Brazilian-inspired, others Californian favorites, but all are attractively presented and arranged. Meanwhile, servers bustle from table to table with hot dishes fresh from the kitchen, not only the skewers of meat that the place is famous for, but cheese rolls, fried polenta, mashed potatoes, and fried plantains.

The best way to sample the buffet, called the Market Table here, is to stop by at lunch, when you may graze to your heart’s content for 15 bucks. I took a friend who had never been to Fogo before and he was overwhelmed with choices. He circled the market table at least twice like a strategist planning an attack, and then loaded up a plate with green beans, hearts of palm salad, roasted and pickled peppers of various hues, artichoke hearts, zucchini, chicken and celery salad, salmon, and an array of meats and cheeses. I had cautioned him to save room for the feijoada, the bean and meat stew with various add-ins, and reminded him that we would receive cheese rolls, polenta, and plantains at the table.

I loaded up on a few of the same items but also got the marinated mushrooms, roasted eggplant, street corn salad, fava bean salad, apple Manchego salad, and grilled asparagus. I’m not sure how Brazilian that corn salad is, but it is different from the usual Mexican corn salad thanks to a dressing based on mayonnaise, sour cream, feta, lime juice, and basil. It’s creamier and sweeter than the Mexican version, but will please those who enjoy the subtle flavors. The apple Manchego salad and chicken-celery salad also use mayonnaise and citrus with different seasonings, and add-ins, including dried figs in the apple salad. Brazilians evidently like mayonnaise as a dressing base, sensible in a hot climate where cool, rich vegetable dishes would be extra attractive.

Servers came by with skewers loaded with beef and chicken, which are available for a surcharge, but we politely declined. The cold table, fried polenta, and cheese puffs that were delivered to our table, and the feijoada were plenty. I like the feijoada with a crumble or two or bacon, a dash of hot sauce, and some farofa, the powdered toasted cassava that adds a slight nutty flavor. Feijoada is the main dish in Brazilian homes from favela shacks to mansions, and you should try some to get a taste of everyday meals.

The skewers of roasted meats are special occasion meals, both there and here, though after you are seated for a churrascaria dinner, the servers always suggest that you visit the market table. Some people make a cursory visit to the buffet and then settle in for an evening of rampant carnivorism, but I suggest that you get that plate of salads and then alternate the contents with meats, going back as needed. The citrusy, fresh vegetable dishes are great as palate cleansers – the orange and beet salad has flavors that cut right through fatty aftertaste of the lamb, and reboot your taste buds.

At many churrascarias almost all of the meats are very simply seasoned, often with nothing but sea salt and a basting of meat stock. The only exception is the chicken legs, which are usually marinated in fruit juice with garlic, salt, and pepper. Fogo is unusual in having several different marinades, and for cooking their beef, pork, and lamb separate from each other so the juices don’t mix. The beef is in that simple sea salt marinade, the pork in something only a little more assertive, and the lamb is in a lemon pepper and mint that makes it a standout. There is also linguica sausage that has no marinade and doesn’t need it. It’s not like the linguica you’ll find in supermarkets that has a deep red color thanks to paprika and spices, and resembles a good bratwurst with a mild pepper kick.

As we tasted our way through the various cuts of beef with identical seasonings, we savored the different flavors and textures of each cut, and there were some surprises. The bottom sirloin and filet mignon were unusually flavorful and tender, while a porterhouse was slightly dry but delicious. Ribeye, my favorite cut at standard steakhouses, was unexpectedly tough when rotisseried. Pincanha, the Brazilian favorite cut known here as top sirloin cap, is available in both regular and extra garlic versions, and is excellent once you cut away the thick rim of fat that bastes the meat as it melts. The lamb was our favorite, available both as chops and slices from a roast, and if this was a conventional restaurant, I could have eaten a full plate of it. I might have done that here too had I wished, because there was nothing stopping me from requesting more lamb every time the server went by, but the variety was much more appealing.

Some add-ons are available at dinner in case there isn’t enough on offer already, so those with a taste for wagyu beef or a dry-aged tomahawk may indulge themselves further. Those who don’t eat meat at all may opt for ordering an entree of Chilean sea bass, pan-seared salmon, or cauliflower steak, and though I didn’t notice any of those going to neighboring tables I do intend to try them sometime.

We tried two cocktails, a Jorge’s Sour and a caramelized pineapple old fashioned, and found the latter decently made but the sour a bit sweet and out of balance. The most Brazilian of liquors, the rum variant cachaça, makes a few appearances as an ingredient but is not used creatively, which was a disappointment. We switched to wine after our starters, and after consulting with a server tried a taste of an Argentine Trapiche Cabernet and a Chilean red blend called Eulila. The Eulila won hands down, and at $44 per bottle it was modestly priced. This blend is bottled for Fogo, and their decision to go with a Chilean wine was a smart one. Brazil makes good beers, but the wines they export are generally second rate.

I have tried two desserts, a berry crème brulee that was well-made but unexceptional, and their take on a brigadeiro, the most popular Brazilian chocolate dessert. The traditional brigadeiro is a simple thing, butter, cocoa powder and condensed milk heated, shaped into balls, and rolled in chocolate sprinkles. Fogo serves a chocolate ganache cake on a chocolate cookie crust with a fudge sauce, strawberries, and whipped cream, with chocolate sprinkles on top. It was a bit overwhelming, and I will opt for the passion fruit mousse or key lime pie in the future.

The all-you-can-eat churrasco experience at Fogo de Chão is $67 per person at dinner, $45 at lunch; the market bar $15 at lunch and $44 at dinner or weekend brunch. Given that one appetizer, salad, and entrée at many South Bay restaurants will cost as much as the whole churrascaria experience, it’s almost a bargain for a meal that unifies two classic styles of dining into a leisurely and delightful feast.