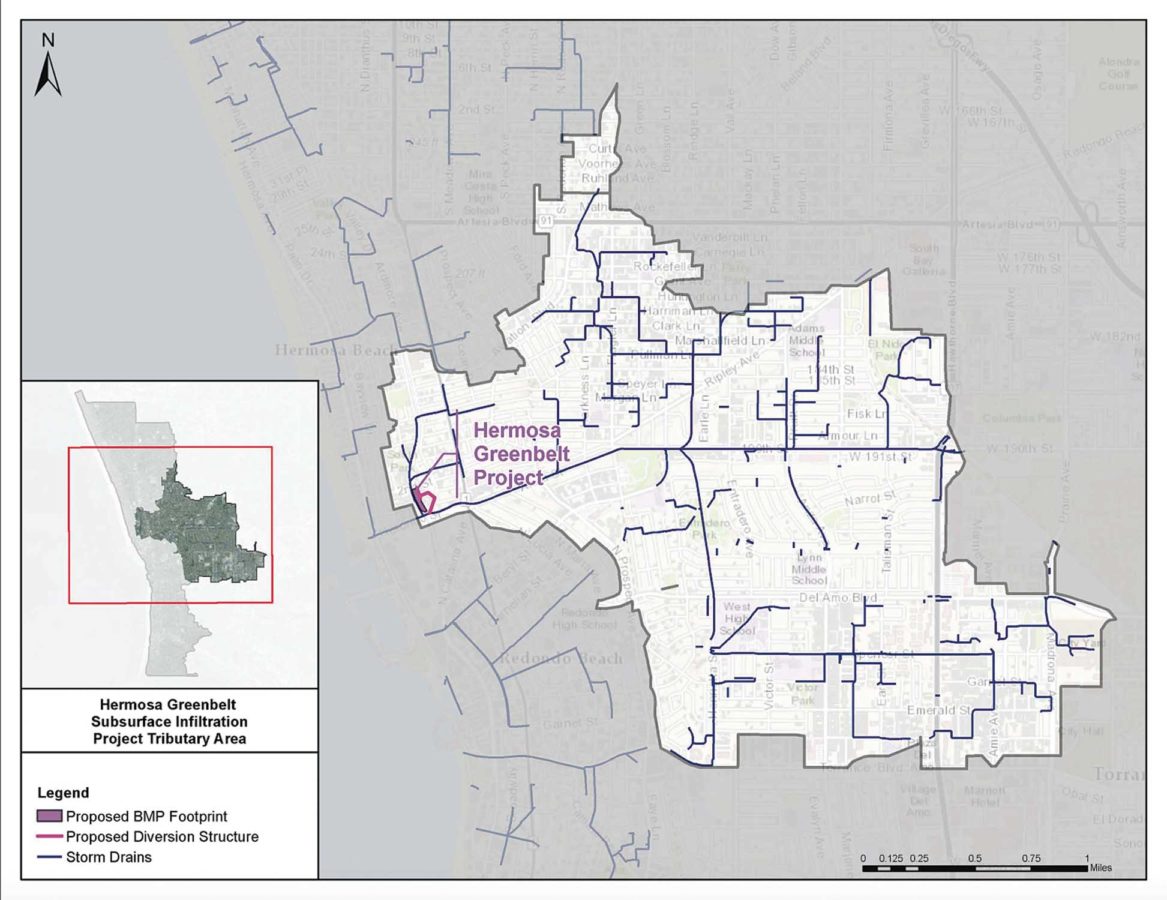 A map of the contributions of South Bay Cities to the Herondo Street storm drain. Image courtesy City of Hermosa Beach

A map of the contributions of South Bay Cities to the Herondo Street storm drain. Image courtesy City of Hermosa Beach

The Hermosa Beach City Council’s decision last week not to pursue a large regional stormwater project under the Greenbelt or beneath South Park has left the future of a $3.1 million grant the Beach Cities received to address the issue in limbo.

Officials with the State Water Resources Control Board said this week that they were still considering whether Hermosa and the other signatories of the Beach Cities Enhanced Watershed Management Plan will be eligible to retain the funds, given that last week’s vote means that they will likely miss timelines set out in the grant to curb ocean pollution coming from the Herondo Street storm drain. Hermosa, along with Redondo Beach, Manhattan Beach, Torrance and the Los Angeles County Flood Control District, had originally identified an area under the Greenbelt between Second Street and Herondo as a location for an underground infiltration gallery, to collect some of the runoff that accumulates on roads and other impermeable surfaces during rainstorms, which would otherwise flow to the ocean and harm water quality.

“We are evaluating whether to offer a revision to the project scope and a time extension, so that the city can complete the new project with the existing grant award,” Meghan Tosney, a supervising water resource control engineer with the state board’s division of financial assistance, said in an email.

The funds come from Prop. 1, a state water bond approved by voters in 2014, and were distributed by the state’s Stormwater Grant Program. They would have covered approximately half of the cost of the Greenbelt project, with the remainder coming from the cities based on their contribution to the storm drain. But the Greenbelt project faced intense opposition from nearby residents, and last week Hermosa’s council voted 4-1 to seek to amend or dissolve the agreement with the other watershed members, and to try to find a location in Redondo to take on much of the Herondo stormwater, while building a smaller project or projects in the Hermosa boundaries.

Leading up to the vote, city staff warned the council that the delays associated with trying to find a location outside the city could compromise the grant. But Councilmember Hany Fangary, who is a member of a council subcommittee discussing alternate locations with Redondo, said that he had reached out to Assemblymember Al Muratsuchi and Sen. Ben Allen, who represent the Beach Cities in the state Legislature. And while Fangary said they offered no guarantees, he said that Hermosa had received “a commitment to represent us at the state level, to help us out.”

“I’m usually not the most optimistic guy in the room, but I’m a little bit more optimistic than our city attorney today, as far as the grant funding,” Fangary said.

It is not clear how much influence legislators have over the decisions of the water board, a regulatory body. In an email, Muratsuchi said that his office had not previously worked with the water board on similar issues, but said that state officials were responsive in helping his office provide the Beach Cities with information about obtaining an extension.

“It remains the responsibility of the jurisdictions in the EWMP to find an alternative that is in compliance, however, we did indicate to the water board that we were supportive of an extension of the timeline to meet the existing grant,” Muratsuchi said.

Tosney, of the state water board, said that her office had received new information from Hermosa late last week and earlier this week, and planned to meet with representatives from Hermosa before making a decision. In the event that Hermosa and the watershed group were to lose the original grant, there are Prop. 1 funds for which Hermosa could apply when they become available starting this summer. While the struggle over the Greenbelt project would be a factor in deciding whether to award those funds, Tosney said, the details of the new proposal, including its environmental benefits and “readiness to proceed,” would ultimately be more important, she said.