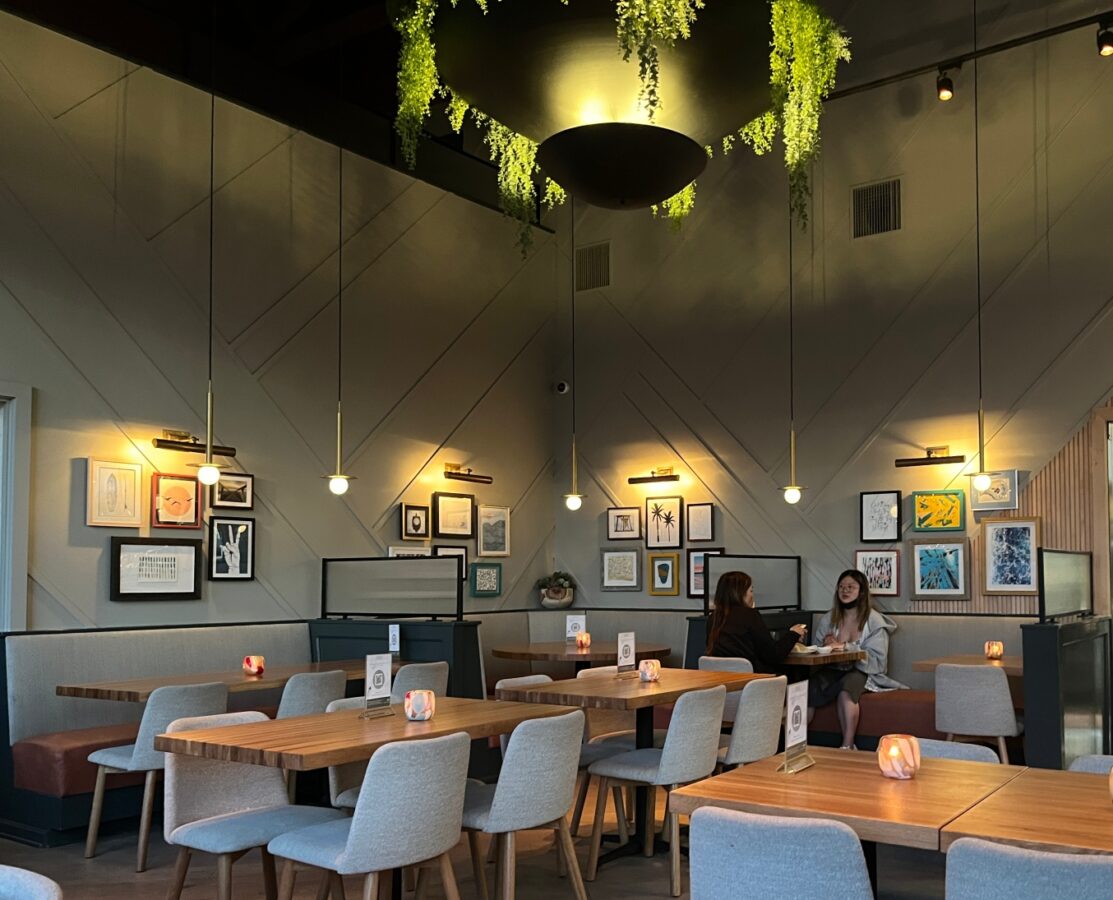 The remodeled interior at Zane's has subtle mid-century style. Photo by Richard Foss

Sometimes you move forward by going backward. A place with a very contemporary design and food can seem dated after only a few years. It’s why some decor can be dismissed with a careless, “That place is so 1995.” Many designers might suggest updating that restaurant to current trends, but it might actually be smarter to go in the other direction

and make it look mid-century. Some looks never go out of style, though it can be hard to know in the moment which ones those might be.

Zane’s opened in 2008, a metamorphosis from a previous establishment called Italy’s Little Kitchen. When I reviewed them in 2017 the place had black walls and an interior dimly lit with bulbous lamps that offered more lighting accent than actual light. It was a modern lounge look that wasn’t all that modern any more, and didn’t really fit their menu of steaks, seafood, and Italian specialties. That selection of food had its roots in the Italian-American steakhouses of the 1950s, and at some point, it must have occurred to somebody that it might be good to remodel the restaurant with that era in mind.

This not to say they went for red leather upholstery and checkered tablecloths – far from it.  Instead, there are accents of ‘50’s and ‘60s Scandinavian design with cool grays and wood accents. This room is tall and narrow. If the restaurant fell on its side it might actually increase the floor space. When the walls were black, this created the effect of stretching to infinity, but the current paint and paneling job gives it character. A light fixture in the center of the room that is draped with fake plants looks like a jungle-covered flying saucer. Smaller lights over the side tables help with their indirect glow. It’s an improvement in every way, but one – the room was previously carpeted but now has a wooden floor, which affects the acoustics adversely. A carpeted floor in a restaurant must carry heavy maintenance costs, so I quite understand why management made that decision. I’ve visited twice recently and had planned to sit outside both times for a quieter meal, but cool and blustery weather shooed us inside. It’s not as loud as many other restaurants in the area, and conversation can still be had in normal tones.

Every meal starts with warm, housemade bread, and a trio of dips: lemony hummus, oil with balsamic vinegar, and a rough-chopped tapenade. The tapenade is my favorite of the three, but the large chunks of olive and vegetable are a challenge to pick up with a knife and fork. They really should provide a spoon, because it’s worth getting every morsel. We ordered a house salad on one visit, a Caesar on the other. The house was a standard, but good mix of fresh greens, and tomatoes with roasted corn, goat cheese, and croutons. The Caesar was a bit more to my taste thanks to a thick, garlicky dressing. If you’re here during their daily happy hour, get the Caesar – the portion is on the small side, but it’s enough for two along with the bread and sauces. We also tried their fried zucchini and the fried brussels sprouts from that menu. The zucchini was five, thick chunks, hot and crispy from the fryer, the sprouts were a larger portion. These were tasty, and the balsamic vinegar was a good flavor pairing, but I found them just a touch dry.Others at the table liked them that way and savored the crispness of the outer leaves. Zane’s isn’t the best happy hour deal in town if it’s all about the money, but if you regard it as a chance to sample a variety of starters even if you’re a small party, it’s a good choice.

Some cocktails are on that list too, and whether or not it’s happy hour you might order the lemon basil martini, or the cosmopolitan. Both are refreshing hot weather drinks that have some sweetness and tartness, but if you prefer a stronger flavor of bitters there are other excellent options. The bar program here is crafted in-house, and The Zane is their pride: tequila or vodka with orange blossom, orgeat, lemon, lime, and topped with candied orange. I recommend it with tequila, because the smokiness plays well with the sweet flavors, but it works either way. The “Don’t Call Me Old Fashioned” is another standout that mixes bourbon with chocolate bitters, maple simple syrup, and luxardo liqueur. It’s a fine twist on a classic.

In two visits we tried the spaghettini mare, branzino, chicken cutlet, ora king salmon, a bone-in ribeye, and “salsicce blanco,” the only unusual item on the otherwise fairly standard Italian menu. That’s not a slam at their other offerings, just an acknowledgement that there are lots of places where you can get linguini and clams, and rigatoni Bolognese. Salcicce bianco is a Northern Italian ragu in a vegetable stock, and wine sauce that is usually made with spicy pork sausage, but done here with chicken sausage instead. Zane’s is unusual in that there is no pork main dish. The only piggy item on the menu seems to be the bacon sprinkled on the loaded potato. The switch to chicken doesn’t harm this dish in the least. It’s the only item I had this time that I also tried on that 2017 visit. I liked it then and still like it now.

I ordered that loaded baked potato just to have the only item with bacon included, but that smoky, fatty flavor was used so modestly that I couldn’t detect it. I was somewhat distracted by the steak, which was a good piece of meat well prepared. Some steakhouses like to get a heavy, smoky char on a steak, so the fat caramelizes, but that’s not what they do here. This meat seems to be seasoned only with salt and pepper, and that’s mainly what you taste besides rich beefiness. I had a steak in Italy in November that was cooked very much like this, so perhaps this is a reflection of genuine European tastes. I enjoy a backyard barbecue steak with plenty of char when it’s done right, but would have this again any time. 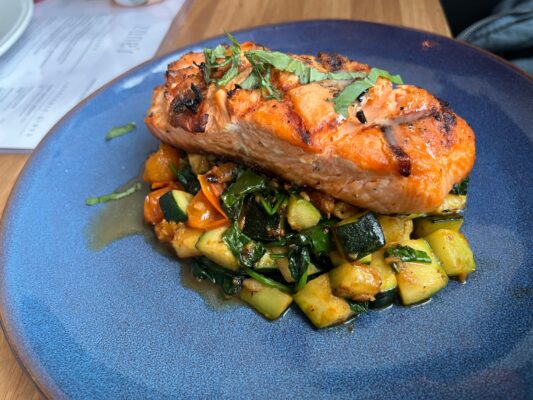 Zane’s salmon is grilled with minimal seasoning, and perched atop a mix of grilled zucchini, tomato, and baby kale ragu. Photo by Richard Foss

The best of the other mains was the Ora King salmon, otherwise known as the chinook. It’s the same species of fish by the Northwest native name or the one given by Maoris of New Zealand. Ora Kings are high in omega-3 fatty acids and healthiest, and since those components affect the flavor it’s also among the most delicious. Zane’s sensibly doesn’t try to gussy up the fish, but grills it with minimal seasoning, and perches it atop a mix of grilled zucchini, tomato, and baby kale ragu. The portion is generous and the flavors perfect.

The other dishes were generally solid, but not noteworthy, though the spaghettini mare stood out for a generous allotment of seafood. The chicken cutlet will appeal to those who enjoy simple flavors, and it was well-cooked. The only item that didn’t please us was the branzino. The preparation with olive oil, roasted potatoes, garlic, and broccolini overwhelmed the meat, and when I’m paying $36 for a fairly small fish, I want to taste it. This recipe would work well with halibut or some other white fish that could be served in a larger portion and be more satisfying.

We’ve tried only two of the dessert items, the six-layer chocolate cake and a pistachio cake. The chocolate cake was one of the breed that is so dark and rich that it seems that light will bend around it, as it does around a black hole, and that’s not a bad thing. I was however glad that there were other people at the table to share this, because I couldn’t have finished a whole piece by myself. The pistachio cake was the polar opposite, all light and fresh flavors and textures. If you have enough people around the table to share both, I highly recommend it because a little of each is perfect.

Dinner at Zanes is about what you would expect given the location on a prime corner in Hermosa, but two people can dine well for around $120. After several decades in the space, they know their business, and it’s a solid choice for cooking that isn’t flamboyant but is very good indeed.