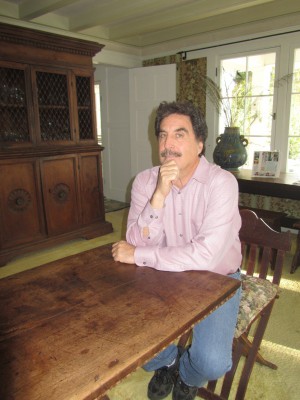 Don Christy, proprietor of the Vanderlip Ranch House and author of Up Around the Bend.

It’s that time of year again when ghost stories proliferate in darkened bedrooms. Perhaps none has received as much attention in Palos Verdes as the myth of the haunted Vanderlip mansion.

Don Christy, the stepson of Frank Vanderlip Sr.’s youngest son John, grew up on the property located within the Portuguese Bend Community and currently lives on site. He says the stories are all a bunch of hokum.

“There are all kinds of stories and speculation, and absolutely none of it is true,” said Christy, who recently published a book about the Vanderlip estate called Up Around the Bend.

One of the oldest stories involves a young girl that haunts the property who was reportedly killed and thrown down a well. No such thing occurred, Christy said. Other stories involve apparitions walking along the road leading to the house.

In all his years around the property Christy says he’s never had an encounter with any alternate life forms.

“I would like to say it here and now, there are no ghosts,” Christy said. “There is really nothing up here to see. And I would so appreciate it if the public would leave the Vanderlip family alone.”

Ever since about the 1960s, stories about ghosts at the Vanderlip mansion have spread partly because of the history – Frank Vanderlip Sr. founded Palos Verdes – and the general privacy of the Vanderlip family. Occupying the house now is Frank’s grandson Kelvin Jr. and his wife.

“A lot of people have preconceived ideas,” Christy said. “They think that the Vanderlips are these strange odd people. They are not. They are just good normal people. But they have to preserve their privacy and people should respect that.”

Curiosity seekers for decades have driven up to the outer gates in hopes of a rare encounter. Mostly they end up scaring themselves or each other, said Christy.

“We’ve had so many people over the years who’ll just come here at night, at 2 or 3 in the morning. I could hear every car that came up,” Christy said. “I got real sick and tired of people coming here at one point. Sometimes they’ll come during the week. I’ll hear a loud car with music and kids and they’ll turn around and park like they own the place.”

One time he was threatened by a group of young people, Christy said.

“I can’t believe how stupid these people are,” Christy said. “People have tried to climb up the walls. It’s ridiculous.”

Another time Christy caught a woman peeking under the gate.

Christy can’t deny he’s had some fun with unwelcome visitors at times. On occasion he would sneak up and scare them. The affable writer grew up in a guest house on the property just beyond the gate, and later returned to care for his ailing mother who lived in the first home built on the peninsula in 1916.

Frank Vanderlip Sr., a real estate mogul from the east coast, purchased 16,000 acres of the Palos Verdes Peninsula in 1913 for $2.4 million. Among the investors was JP Morgan. Today just 11 acres remain in the Vanderlip etate.

The main house, known as Villa Narcissa after Vanderlip’s wife, was given to Frank’s son Kelvin and his wife Ellen, who lived in the home up until her death in 2009. Christy believes the ghost stories stem from Ellen’s father, a Norwegian, who used to visit during the summers in the 1950s.

“Like a lot of Norwegians, he was light-skinned with light hair and he was an older guy.” Christy said. “I heard that he would walk around in a sleep shirt and a little lantern and a thing on his head. People would see that and thus the story of the ghost. I’m 90 percent certain this is where it started.” ER