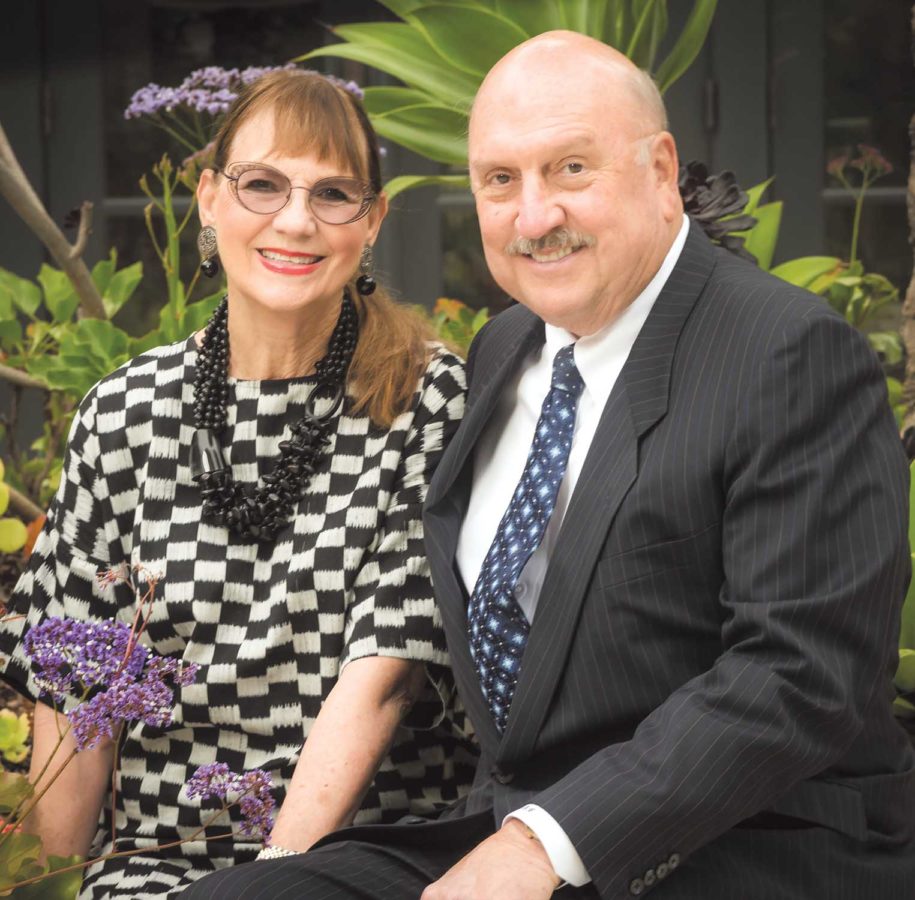 Concert violinist, corporate chief, captain of finance, consummate volunteer and class action attorney are some of the roles that describe the five people H.E.L.P. (Health and Elder Law Programs) will honor at their May 4 gala. However, the roles David and Ann Buxton, Allen and Dorothy Lay, and Brad Baker value most is community changemaker.

To celebrate these five pillars of the community, H.E.L.P will present the honorees with awards for leadership, generosity, and impact at their May 4, Journey to Grand Adventures Gala at the Torrance Marriott.  H.E.L.P provides free education and resources for seniors.

David Buxton showed signs of business acumen in high school when he began selling vintage Ford auto parts, traveling 10,000 miles every summer, and shipping parts across the country. When he joined the United States Air Force in 1963, he asked to be deployed to Paris. They sent him to Perris, California. After seeing the palm trees and sunny weather, he told himself, “Someday, I’m going to live out here.”  “And here we are.”

After the Air Force, Buxton attended the University of Southern California, where he studied real estate. He decided to major in real estate because he read in Forbes magazine that one-third of the richest people in the world made their fortunes in real estate. Buxton took a class at USC from a real estate guru who wrote the seminal book on commercial real estate. “But, he never made money himself in real estate,” Buxton said. Buxton won the “Best Appraisal” award at USC for his term project, an analysis of a complex property.

After entering real estate financing, Buxton helped secure loans for landmark buildings across the country, first as a Union Bank vice president, and then with his own financial companies.

Buildings Buxton acquired for his own portfolio include the TorMed Medical Office buildings on the Torrance Memorial Medical Center campus. In 2007, he retired from his 40-year commercial, mortgage, and real estate investment banking career. Like many other recent retirees, Buxton took up golf, but changing trends in medicine had resulted in increased vacancies in his buildings. So, he began managing his properties, himself.

Since moving to the Peninsula in 1973, Buxton has chaired numerous nonprofit boards, capital campaigns, and committees, including some at the Neighborhood Church and with the Republican Party. He was a founding board member of the Torrance Police Foundation, which raises funds for equipment, education, and training for men and women in blue.

“David truly cares about the organization and the policeman. He and Ann have been very generous. They lead by example,” said TPF Board Chair Hank Parker. 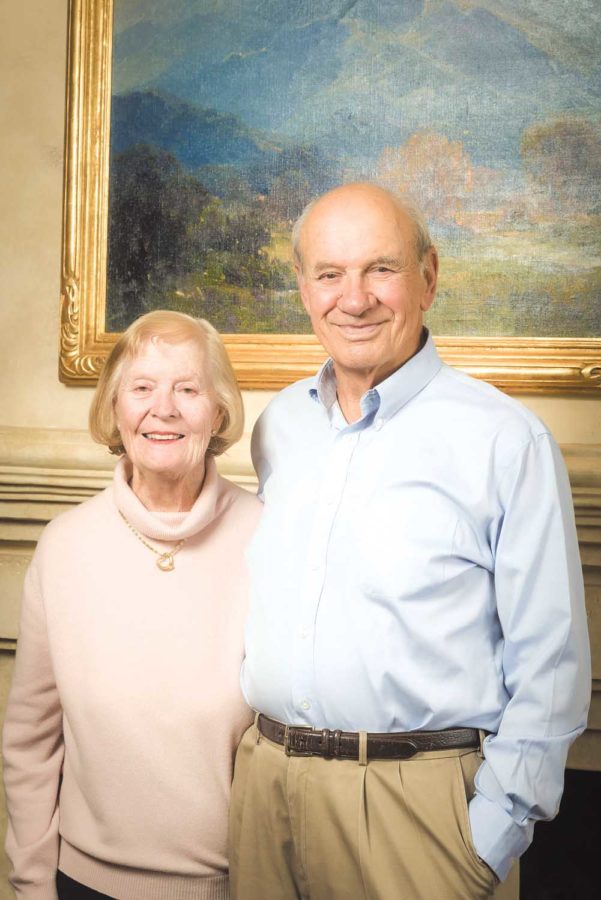 “Ann is very kind and thoughtful too,” Dr. Young continued. “The Buxtons are church people. When they’re in town, they’re in church.”

At the Neighborhood Church, Ann serves on the Fine Arts committee and is a member of the Flower Guild.

Beauty and design have always been important in Ann’s life. In her youth, parents who hired Ann to babysit for 35 cents an hour often returned to a home that looked markedly different: Ann had rearranged their furniture. Luckily, most of the parents were pleased with her changes.

Ann has hosted numerous Palos Verdes Art Center gatherings at the Buxton Palos Verdes Estates Tuscan Villa, where the furniture is perfectly placed. “These are my people,” Ann said. Currently, she is chairperson of the PVAC Board of Trustees, and was president for two years. Ann has also served for three years as president of the Circle, PVAC’s support group of over 100 women.

“Ann is is very positive, as well as caring. Ann doesn’t focus on the problem, she focuses on the solution,” said longtime PVAC Trustee Maude Landon.

The Buxtons have sponsored a Kenyan girl’s education for a decade. Last year, they were delighted to meet the teen in Africa, encouraging her to study hard and never give up on her dreams.

“It’s been a wonderful experience. We feel good about giving her an education. It’s been a joy to me.” Ann said.

Nearly 70 years ago, Dorothy Lay met a nice young man at a Methodist youth camp in Kansas. She declared to her mother that evening, “That’s the man I’m going to marry.” And she did. Rolling Hills residents Dorothy “ Dottie” and Allen, a pioneering high-tech executive, will celebrate their 63rd wedding anniversary this June.

Dorothy said she knew Allen was the man for her because they had so much in common. Thei parents were all teachers and the two shared similar values.

Allen founded Pertec Computer, which was listed on the NYSE in the mid-seventies. He was subsequently president of Cado Systems, which also went public. Next, he was a general partner with a venture capital firm, investing in numerous start-ups. Said Allen, “Some succeeded, some did not,” he said.

As a respected industry leader well before Silicon Valley was a household phrase, Allen recalls watching tech titans Bill Gates and Steve Jobs as they eyed each other warily at industry gatherings.

While Allen built companies, Dorothy pursued her music interests. She was the first violinist at several leading Southland orchestras, as well as a highly sought-after violin teacher for 20 years. She also served as president of the Peninsula Committee for the Los Angeles Philharmonic and led orchestras and choirs at St. Peters by the Sea.

As proud members of the Greatest Generation, the Lays dismiss the millennial notion of following your passion. Instead, they credit their success to “timing and a lot of hard work,” Allen said.

Added Dorothy, “When you have to do something, you just do it.”

The Lays have brought their incredible work ethic to civic and community organizations. Allen was a longtime Rolling Hills councilman and mayor, though he never spent more than $150 on a campaign.

“We like Palos Verdes. We decided several years ago to focus our efforts on giving in Palos Verdes, San Pedro, and Wilmington,” Allen said. The Lays have supported the PV Art Center, Palos Verdes Land Conservancy, South Coast Botanic Gardens, and many other nonprofits. “These organizations are what make this community viable and a very interesting place to live,” Allen said. 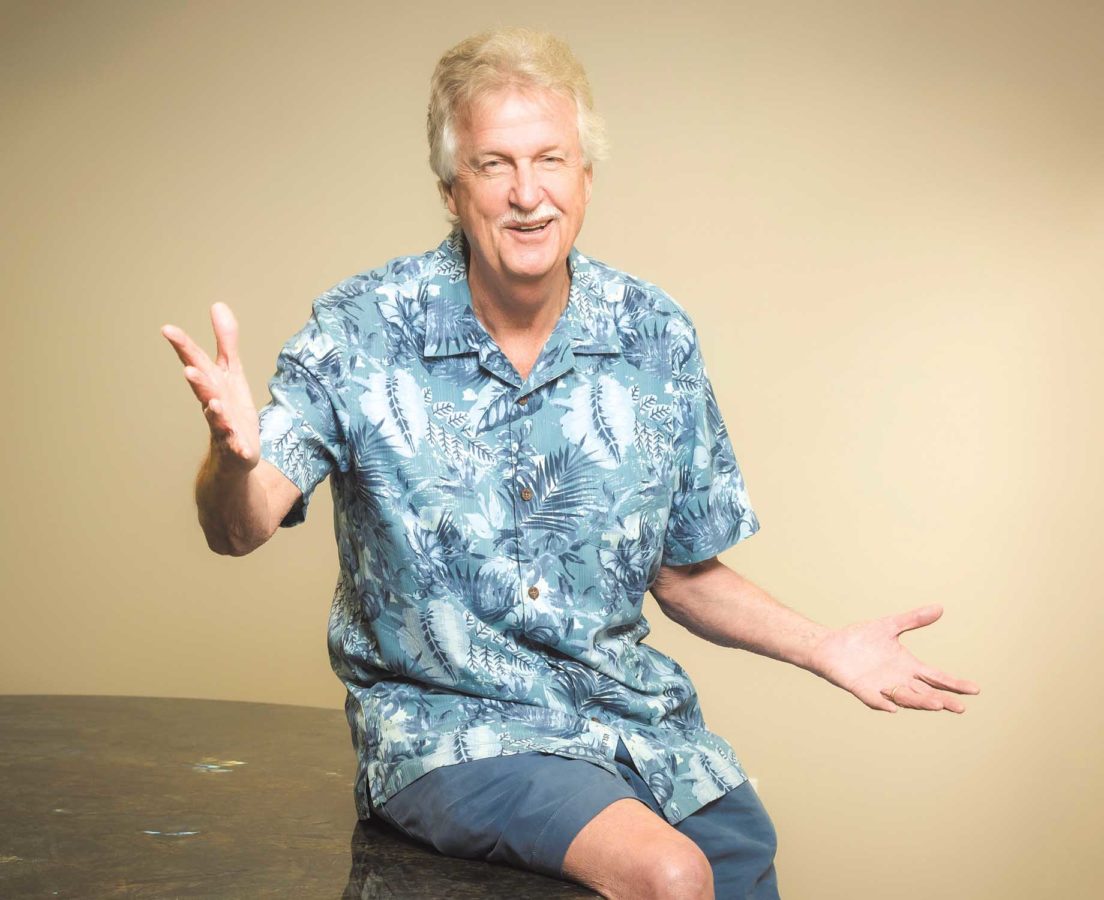 In 2018, the Lays made a substantial donation to Peninsula Seniors, enabling the group to purchase part of a building. “They needed a facility. It was high time they stopped having to beg, borrow and steal for a place to operate,” said Allen.

“PV Seniors Executive Director Margie Beierschmitt said, “Besides their financial support, the Lays have been helpful with their guidance through this capital campaign process. They gave a generous gift to the building fund, as well as to establish the endowment.”

“I think the Lays have a heart for our community. They are very savvy philanthropists who knew they could be really impactful to our organization at this time,” said Beierschmitt, who happily shared that PV Seniors is relocating this month to a building near the Peninsula Center Library.

The PVAC has also benefited greatly from the Lays’ leadership and generosity. Former PVAC president Maude Landon said that Allen was president of the organization during a crucial time— the bidding and reconstruction phase of the Center. “Allen kept the Capital Campaign committee on course with weekly meetings for several years. He never missed a meeting. He has been a wonderful model for us to follow,” Landon said.

Another charity the Lays support is E.X.P. — The Opportunity Place, which empowers students from Wilmington, Harbor City, and other cities through internships, mentoring and education. Since 2002, the Lays have supported about 15 high school E.X.P. students, as well as enabling them to attend Cal Maritime in Vallejo, California.

Allen related with heartfelt enthusiasm the journeys of two of their beneficiaries: A teenager with neither college nor career aspirations is now a successful architect. Another is an international lawyer.

E.X.P. Chief Executive Director Amy Grat said, “The Lays invest in youth and the return on that investment is leaders of our communities.”

When you meet Brad Baker at his law firm on Pier Avenue in the heart of Hermosa, it’s easy to be taken aback by his work uniform: board shorts, Hawaiian shirt, and flip flops.

Seated at the surfboard-shaped conference table in the law offices of Baker, Burton, and Lundy, Baker said, “We’re not your typical law firm.”

Baker has been a follower of John Wooden’s Pyramid of Success since sixth grade, and applied the legendary UCLA basketball coach’s precepts while playing basketball at University of California Irvine. Fortunately for his clients, this was the only arena where Baker did not excel. He claims to hold the school record for the most benched player.

After graduating from the UCLA School of Law, Baker faced a life-threatening illness in Europe. While confined to a Swiss hotel with a 104-degree fever, and losing fifteen pounds, Baker told himself, “If I make it through this, I’m going to donate six months of my life to something [charitable].” When he returned to California he worked at Legal Aid. Afterwards, he started a law firm with law school classmate Kent Burton.

He has twice argued before United States Supreme Court and is the only attorney known to have turned an evenly split Supreme Court into a 9-0 win for a class action suit.

Class action lawsuits and estate planning might seem to have little in common. But for Baker, both are about helping the vulnerable—fighting for employee retirement plans or helping seniors plan for problems that can arise when money, children and legacy conflict.

H.E.L.P. Board Chair and retired medical director Dr. Tom Paulsen said, “I think Brad’s humor helps to make him such an effective attorney. He is so confident, yet he has this light comical air. He really warms to people because of that side of his personality.”

Baker has donated countless hours of legal work to  H.E.L.P. and served on its board for nine years. He and his wife Jennifer have also donated generously.

“Seniors have always been a focus of mine; I’ve always appreciated them, possibly because I had two sets of incredible grandparents who gave me more love than I deserved,” Baker said.

He feels that society often dismisses seniors. “They’re still people. It’s okay to mess with them,” Baker said. “Everyone treats them with kid gloves. I have fun with my clients.”

Baker attributes his generosity to his upbringing. “My parents were huge in paying it forward. If the younger generation was in the habit of paying it forward, the world would be nicer; we would have a better society. There’s a satisfaction that money can’t buy. You can call it karma,” Baker said.

Torrance non-profit H.E.L.P. offers guidance to seniors and their families on financial, legal and health issues. Last year, H.E.L.P. assisted over 6,000 families. The organization partners with local cities and groups, such as Peninsula Seniors, to assist South Bay’s fast-growing senior population. “With 25 percent of the Peninsula comprised of seniors, it’s important that there are sufficient funds, and the funds are allocated correctly,” said H.E.L.P.’s Executive Director Britt Huff, the immediate past Rolling Hills Estates mayor.

“H.E.L.P. is a first stop resource for seniors. We’re one of the few organizations that provides an impartial, sit-down safe-haven; tell us your problem, and we’ll walk you through it. In this day, that’s rare,” Huff said.

For information about H.E.L.P., visit HELP4srs.org. To purchase tickets to the May 4 “Journey to Grand Adventures” gala at the Torrance Marriott, call (310)533-1996 or email AShubin@HELP4srs.org.