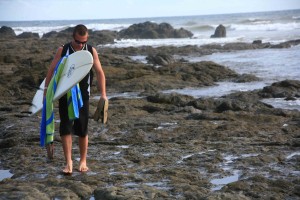 Matthew Varon at the end of a day of surfing.

The surf was pumping in front of the Torrance Beach parking lot at sunset last Friday. Guitarists Jordan Munde and Jeff Nelson were playing the Rolling Stone’s “Wild Horses.” Over 200 of Matt Varon’s friends, as well as his parents Russell and Debbie, his sister Morgan and uncle Marshall were gathered on the beach for a candlelight vigil.

If there is such a thing as a fitting farewell for a man who died at his father’s home for no known reason, this gathering was it.

But it was of little consolation to his father, who was barely able to express his thanks to the gathering.

Russell Varon’s 21-year-old son Matt was home last week, on break from Arizona State University’s Carey School of Business, where he was on the dean’s list. Tuesday evening, he and his mom indulged in one of their favorite rituals — Tuesday Two-For-One burgers at Hennessey’s in the Redondo Riviera Village. After dinner Varon returned to his dad’s Manhattan Beach home. The two talked until late in the evening about fraternity life and the law school.

The son had worked for his dad and uncle at Morgan’s Jewelers in Torrance, which their father Morgan Varon had founded in 1946. But the surfer-skater-snowboarder planned to chart his own course when he finished school. His father couldn’t have been prouder.

Wednesday morning, Matthew Stuart Varon was found by his father unconscious on the couch, his mouth covered in blood and foam.

The father called 911 and attempted to resuscitate his son. He was pronounced dead at Providence Little Company of Mary in Torrance. According to the Manhattan Beach police, there was no evidence of drugs, alcohol or trauma.

At press time, the family was still awaiting the results of a coroner’s autopsy. 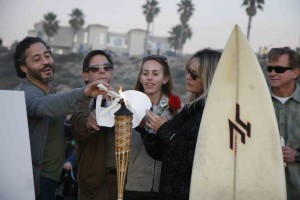 On the evening of her son’s death Debbie Varon sought comfort at Torrance Beach. She threw a rose in the ocean and then sat in the sand to wait for the rose to be taken out to sea. The waves took it out, and brought it back in so many times that finally the mother decided to retrieve the rose. She found it resting on a shell.

Minister Steve Villanueva recalled the story during the Friday evening vigil as a sign that Varon is now in God’s capable hands.

Neighbor Ben Morse described the warm relationship he witnessed between Matt and his father as an inspiration in the raising of his own two boys.

Craig Stevens, the dad of one of Varon’s Arizona State roommates recalled seeing Debbie’s smile and Russell’s spirit of determination in the couple’s son.