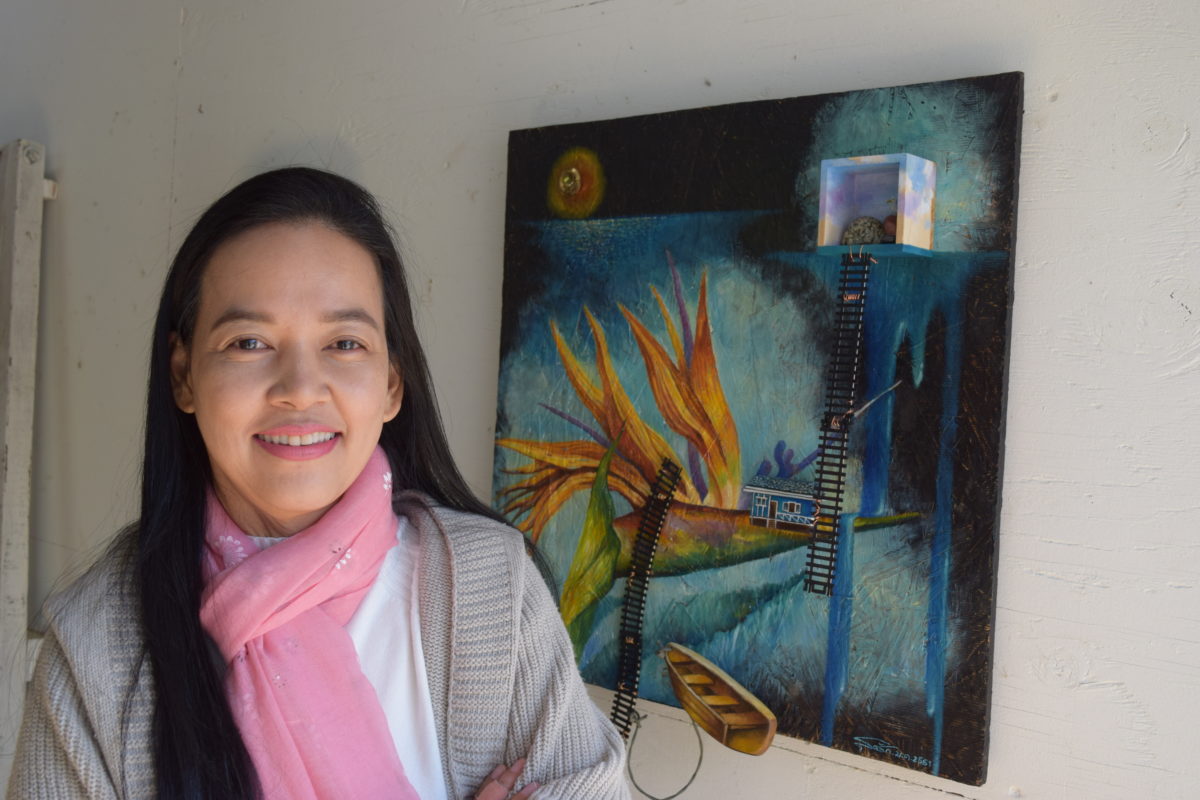 I’m on my knees and leaning over the large canvas oil paintings of Sudrak Khongpuang as the artist herself uncovers and displays one picture after another. We’re on the floor in the Portuguese Bend home of Ben and Peggy Zask, where Sudrak is in residence for one month, a stay which concludes with a reception at South Bay Contemporary/SoLA Gallery in Los Angeles. 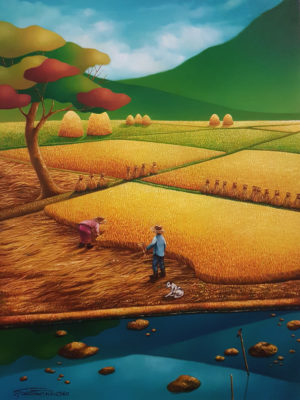 Sudrak lives in Thailand and the majority of her paintings depict the rural countryside outside of Bangkok. The pictures are vibrant and lush, saturated with color, and yet the tones are earthy and cool. They are often filled with gentle hills, sprawling rice fields, quiet ponds with water lilies and lotus flowers, a water buffalo or two and a few billowing clouds in a blue sky. They are Edenic and one would not be afraid to step into them, for there are no crouching tigers or hidden dragons.

Childhood memories brought to life
Sudrak Khongpuang has been described as a naive Surrealist, and in art this might imply someone without an academically-trained background such as Henri Rousseau, Grandma Moses, or even Maudie Lewis (depicted in last year’s film “Maudie” with Sally Hawkins and Ethan Hawke). However, since Sudrak has a pair of university degrees that definition travels only so far in this case. As for the Surrealist handle, one could point to René Magritte (if we regard Sudrak’s floating islets with their tethered rowboats dangling in the aether), but the undulating ridgetops and the smooth pastures also recall the American regionalist painters, mostly of the Midwest, such as Roger Medearis, Grant Wood, and Thomas Hart Benton. 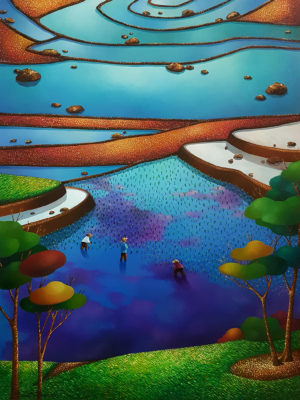 In Sudrak’s painting, though, with its more intense hue, the work springs from the fond memories of her youth, when every summer she would spend time with her grandparents away from the big cities. Those were pleasant days for her, and she often uses the word “happy” when referring to what she felt or in describing what she hopes to convey through her art.
I would probably substitute the word peaceful, or maybe soothing and contemplative, because if we mention “happy” paintings others might think we’re really saying saccharine instead, and these pictures are anything but that.
The landscapes do contain people as well, but they are often tiny figures, usually seen in the distance and trudging through a path in the rice fields. The meaning is clear: Sudrak is expressing her reverence for nature and this ties in with a Buddhist tenet that says S/he who knows nature, knows life.

Bridging an ocean through art
This isn’t the first time that Sudrak has come to the United States. Two years ago she was given a solo show called “Grown Up” at the Loft in San Pedro. That show, like the present one, was under the auspices of Peggy Zask and South Bay Contemporary, but it was also before Zask moved her gallery out of the harbor and farther north.
Peggy Zask isn’t known for luring artists from other countries, so how did she and Sudrak first connect?
It started with a mutual friend of Peggy and Ben’s named Matthew Thomas who was an artist at Angels Gate, above Point Fermin. He participated in an art show in Thailand that was organized by Kamol Tassananchalee, who is among Thailand’s most respected artists (he represented his country in 2015 at the Venice Biennale). That was when Thomas met Sudrak, they became friends, and later Sudrak mentioned her desire to exhibit her art elsewhere. She’d already been shown throughout Thailand, and so Thomas reached out to Peggy and Ben.
It’s clear that they were instantly smitten by Sudrak’s work. 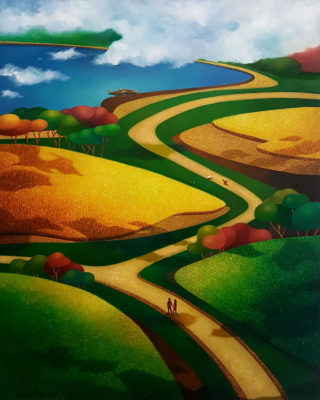 Enlarging her repertoire
This time, though, she’s expanding her palette, her artistic horizon, by trying something different: Sudrak is moving from 2D to 3D. Or, as Peggy explained it to Alyssa Wynne, “Ben and I work with found objects in order to not consume so much. Sudrak has been influenced by that attitude so, rather than do sculpture since she’s a painter, she’s taking objects and painting on them, dimensionalizing the format she’s painting on.”
In her studio on the grounds of the Zask residence, Sudrak shows the first fruits of her endeavor: She’s already painted on the rear casing of a guitar and on a galvanized washboard, and she’s also attached small stones and pieces of wood to other canvases (a few lengths from a toy railroad track now serve as a vertical ladder in one picture). While ultimately they will be harder to roll up into a mailing tube, the works are impressive in that what’s been incorporated doesn’t seem out of place or merely applied in a moment of whimsy. No, each addition is carefully weighed, and contributes to the overall effect.
Accompanied by her hosts, Sudrak has made several trips to the tide pools at the base of Portuguese Bend, and with Ben Zask has gone to estate sales and other places where intriguing objects have been acquired. It’s not the way that Sudrak has approached her art all these years, but it’s a branching out that’s bound to throw open new doors and become a part of her artistic vision once she’s returned to Thailand.
When we stand before Sudrak’s paintings it’s more than merely looking into a bucolic landscape. It’s also looking into work that sidesteps anger or confusion or confrontation, whether political, sociological, or ecological. Instead, her pictures radiate harmony and whisper to us what’s possible on a balanced planet. This is art to nourish the soul.
Sudrak Khongpuang: A Tale of Two Shores is just that, work brought from Thailand and work produced here, on the peninsula or at South Bay Contemporary/SoLA Gallery where the artist is currently painting, Thursday through Saturday, 11 a.m. to 4 p.m., which is also open to the public during these times. A reception takes place on Saturday, Feb. 24, from 4 to 7 p.m. and the address is 3718 W. Slauson Ave., Los Angeles. A few days after that, Sudrak returns to Thailand, but always with the prospect of returning and sharing more of her rich and vibrant work. (310) 429-0973 or go to southbaycontemporary.org. ER