Everything at this Southeast Asian cafe is plant-based, and most of it works 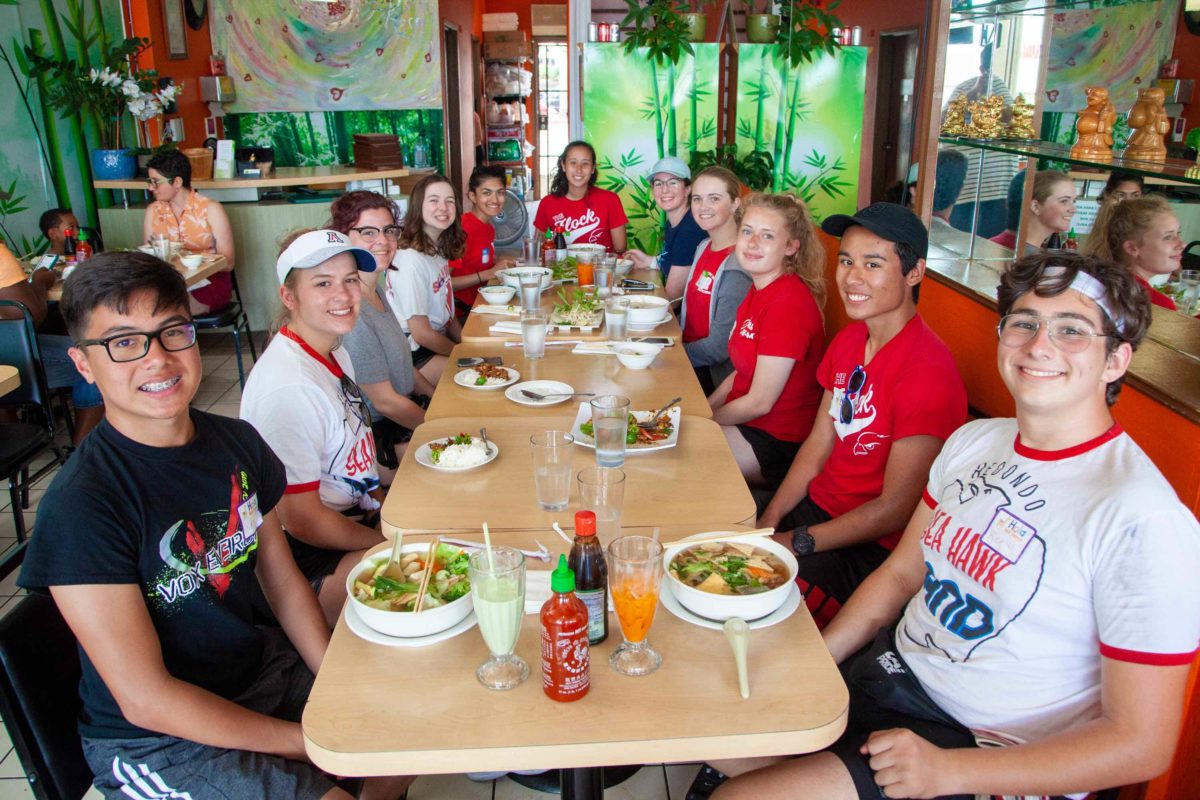 The Redondo Union Marching Band takes a break at Happy Veggie, just a few blocks from their campus. Photo by JP Cordero (CivicCouch.com)

Occasionally I see a place with a name like “Jolly Cow Burgers” and wonder what about that establishment might spark bovine levity. I don’t think cattle are particularly intelligent compared to people, though the performance of certain politicians as stupid herd animals puts that in doubt. Nevertheless, even something as dim as a cow must regard being chopped into bits and eaten by something else with some dismay. Then again, a restaurant called “Dismayed Cow Burgers” doesn’t have the same ring to it.

Happy Veggie in Redondo is off the hook for that, because I’m assuming vegetables lack any apprehension about their place in the food chain. The little restaurant in a corner of a strip mall focuses on an unusual specialty – vegan Vietnamese food. This may seem surprising because the Vietnamese diet is famously heavy on seafood, and the best-known national seasoning, a sauce called nuoc mam, has fish as a major component. Then again, many Vietnamese are Buddhists who forego meat for at least part of the year, and cooks in that community have gotten a lot of practice in making plants tasty. The restaurant is a cute space nicely decorated with murals and original art, and it’s a serene but casual environment.

The menu is aimed at a mainstream audience, with every item given a clear English language explanation, and as might be expected soy-meat and tofu make many appearances. The most traditional setting of these is the golden tofu appetizer, triangles of bean curd that are flash fried and served with mint and a lemon pepper dipping sauce. Since tofu doesn’t have a lot of flavor on its own, this item gets judged on how light and fluffy the tofu comes out and the quality of the sauce. The bean curd was slightly leathery rather than crispy, but the sauce was delightful. It was composed mainly of salt, pepper, and lemon with just a dash of chili, but that was enough to make a luscious accompaniment. 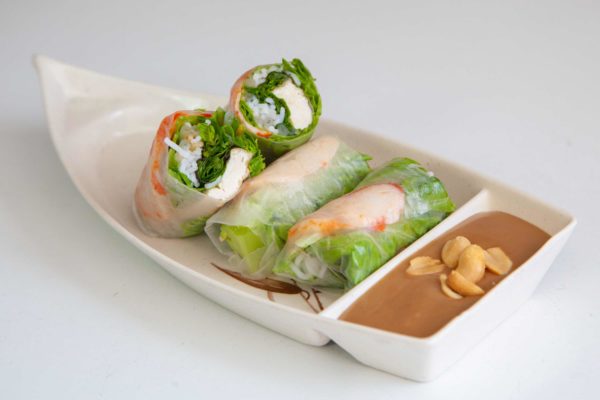 The soya “chicken drumsticks” — actually textured soy wrapped around little sticks – showed how close modern soy products can get to mimicking real chicken. They had the crisp exterior of real fried chicken wings and would have been fine with buffalo sauce. The sweet and sour sauce they came with wasn’t quite as interesting, but we had some lemon pepper sauce left over and used that. There were a few house-made pickles on the side as a garnish and we wished there were more, because they were excellent as a flavor contrast. We were a bit less happy with the “crunchy casaval rolls” (and our server didn’t know what casaval might be, so I can’t answer that question). It was a fairly standard vegetarian Vietnamese summer roll of vegetables, tofu, and peanuts in a rice flour wrapper, but they were so generous with the cilantro that it overwhelmed the other flavors. I like cilantro, but this was too much.

For mains we ordered chicken curry, lemongrass fish, a “szechuan” stir-fry, and a bowl of pho. Though pho is traditionally a breakfast item in Vietnam, Americans enjoy it all day, and it’s one of the benchmarks for any Vietnamese restaurant. This was the best vegetarian version I’ve had, the broth rich with star anise and spice. It was missing some of the umami and richness you get from a bone broth, but taken on its own merits it was successful.

The szechuan stir-fry with soy chicken was solidly executed with a balance of ginger and peppery heat, but I liked the curry a bit better. Though it had been ordered extra spicy, the heat seemed to me to be about on a par with the stir-fry, though the coconut milk in the curry does have a way of moderating peppery flavors.

The only dud was the lemongrass fish, because soya fish just isn’t a convincing substitute for even mildly flavored seafood. The food chemists are no doubt working on this but based on this evidence, they aren’t there yet. Lemongrass and garlic are great when paired with robust stocks and full flavors, but it just took over here.

To pair with your meal you have the option of teas, juice drinks, or lemonade, and the lemonade is quite good. The Vietnamese like theirs lightly salted, and if you ask they can make it that way, but the tart, fresh stuff they serve by default is just fine.

Happy Veggie offers three desserts, all on the sweet side as is traditional, but we decided to pass this time. Our bill for four was $93, not bad at all for dinner in the Beach Cities. If you’re a vegetarian or vegan who wants to explore Southeast Asian cuisine, this place is made for you, and if you’re a fan of Vietnamese food who is interested in a different experience you should give it a chance.