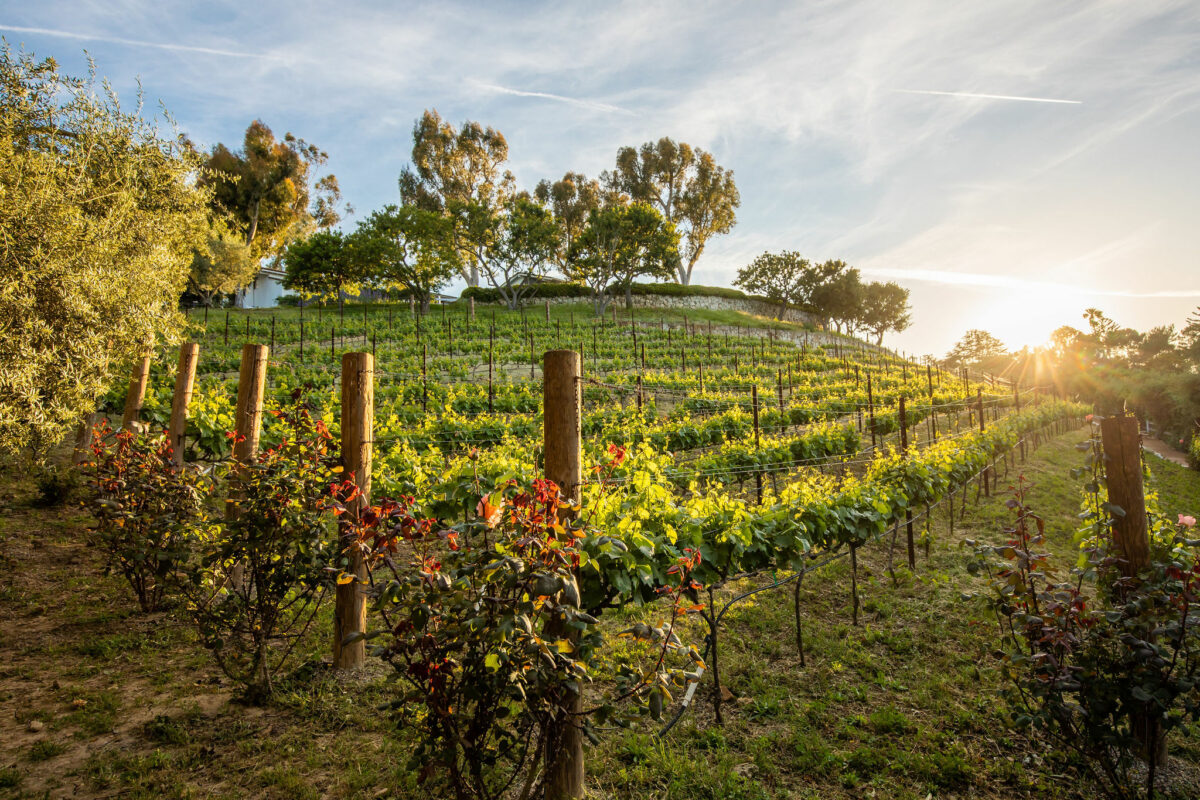 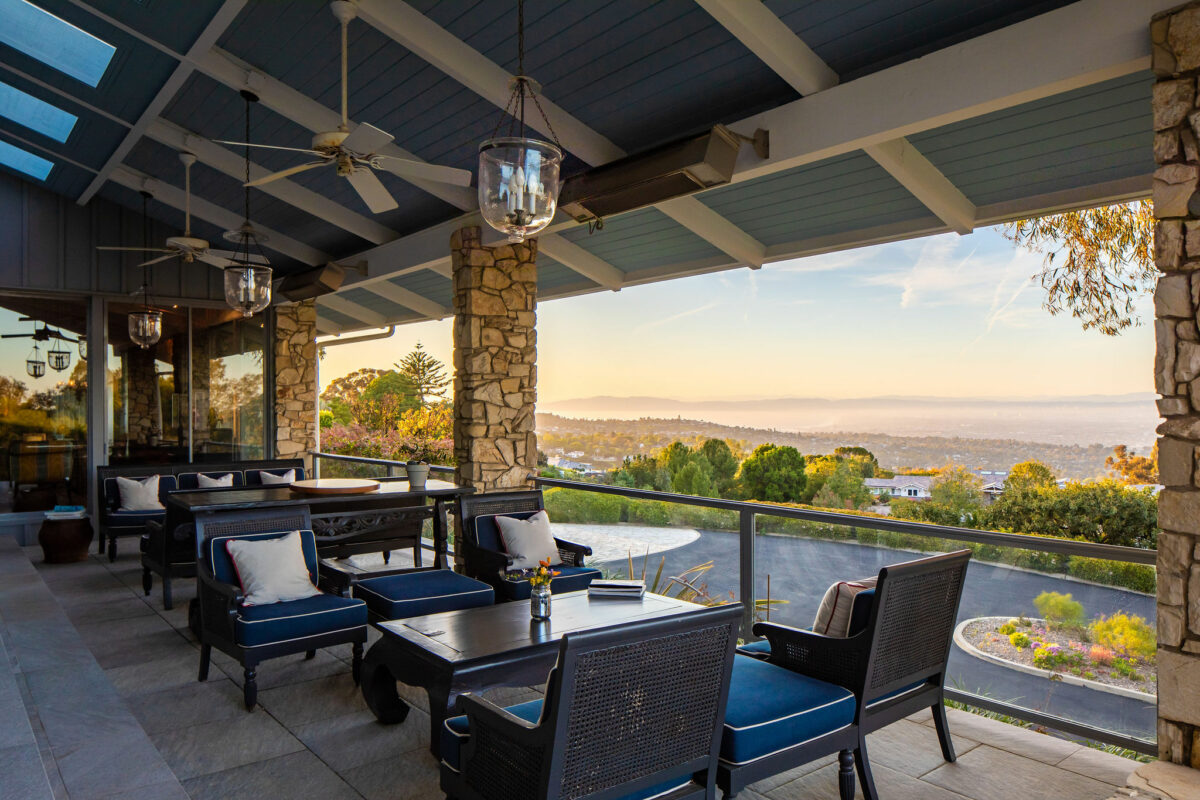 Villa Oneiro’s setting suggests a Sonoma vineyard, but with an ocean view.

This European style estate has over 2,500 hundred grape vines, and 100 olive trees, of both Greek and Spanish varietals on site. The estate is located on Portuguese Bend Road in Rolling Hills, in an area of the Peninsula  designated as an American Viticultural Area (AVA). The designation was issued by the Alcohol and Tobacco Tax and Trade Bureau in 2021, in recognition of the climate and geographic  characteristics, conducive to growing grapes.

Villa Oneiro has received ratings from Wine Spectator of 91 for it’s Chardonnay and 93 for the Pinot Noir. The wines produced from these grapes are primarily Pinot and Chardonnay, and were planted in 2006, within specifically selected microclimate sites. The vines produce approximately 275 cases of wine each year.

The property also produces 250 fifty liters of olive oil annually annually, and supplies Peninsula restaurants with herbs from its garden and citrus fruit from its orchard. 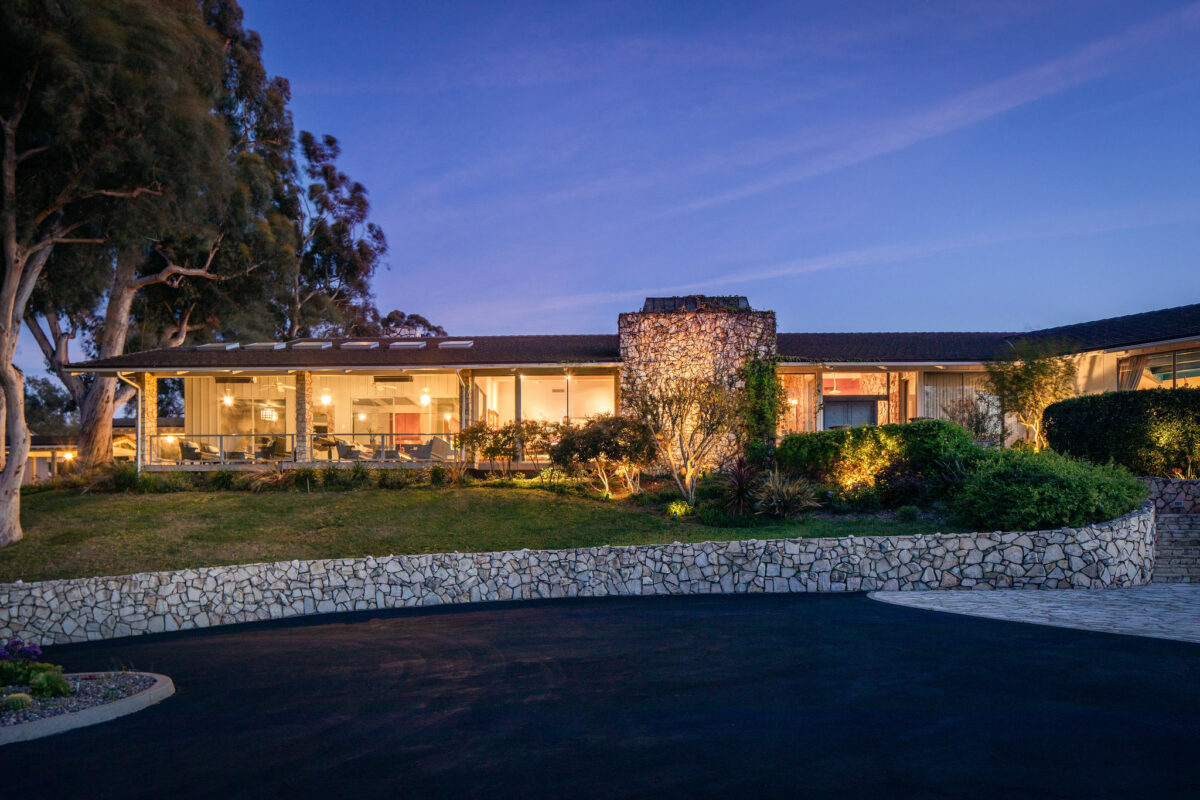 Villa Oneiro is Greek for “House of Dreams.” The sprawling five acres was conceived in the Mid Century by developer Ernest Hahn, the “Father of the Modern Mall,” as his personal residence. He selected the site because of its privacy, and expansive views of the Santa Monica Bay, and Los Angeles basin. Hahn believed the location, which spans the circumference of Portuguese Bend Road, was the best location in Rolling Hills, according to Realtor Gerard Bisignano who is representing the sellers on this listing. 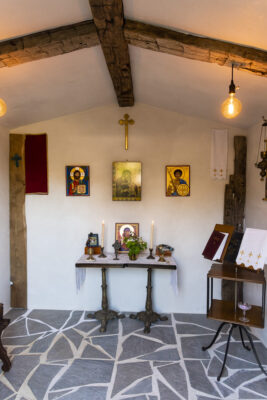 Hahn’s first major project was La Cumbre Plaza in Santa Barbara, which opened in 1967. He went on to become the largest mall builder in the Western United States. Among his projects were Hawthorne Plaza (1977), Long Beach Plaza (1980) and The Courtyard (1981) which was redeveloped into Promenade on the Peninsula.

The most striking characteristics of this property are its sustainability and luxury. It offers ecological self-reliance within a gated community. Walking paths throughout the five acres lead through the vineyards, herb gardens and olive groves. Refuge can be found in a small, stone chapel with a chapel bell.

The current owners have transformed the one level, 6,200 square foot home and grounds to reflect their beliefs in sustainability and respecting nature while maintaining the Mid Century style.

The post and wooden beam ceilings, coupled with extensive use of  PV stone masonry on interior, and exterior walls and around the fireplace, reinforce the feeling of the home being tied to nature. The floors are walnut. A  temperature controlled wine cellar is on premise.

In addition to a new swimming pool and spa, there is an outdoor kitchen. A wood burning outdoor oven, with an activity area and firepit, offer multiple areas by which to take in the spectacular views.

John Muir might have been visiting Villa Oneiro when he wrote, “I only went out for a walk, and finally concluded to stay out till sundown, for going out, I found, was really going in.”  Pen