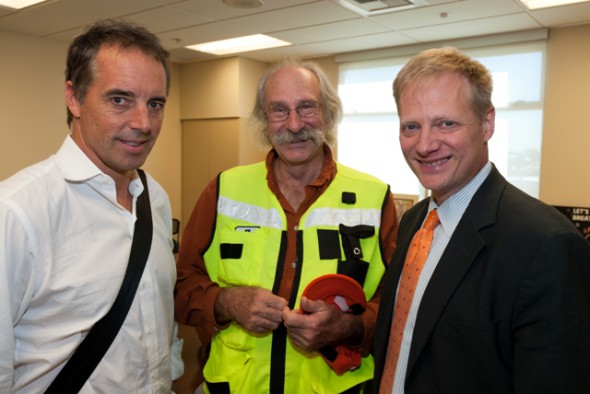 The revolution began at Eat at Joes.

Its leaders included a man with a grey handle-bar mustache who wore a bright yellow vest, an exuberant college professor from Iowa who came bearing the gifts of smaller plates, and a long-legged explorer who’d once bicycled from the arctic to the end of South America but who now was on a broader quest – to find a way to change Americans’ habits so that they live longer, healthier, and happier lives.

A year ago, Dan Burden, Brian Wansink, and Dan Buettner arrived at Eat at Joes – home of the John Wayne omelet – to officially launch the Beach Cities’ quest to become what is known as a Vitality City. The public health initiative grew from Buettner’s work with National Geographic identifying the areas in the world where people live the longest and healthiest lives, known as Blue Zones; Vitality City seeks to apply lessons from how those people live to how people live here. The trio is the equivalent of an A-Team in public health – Burden is the leading national expert on making cities more walkable and bike-able, Wansink is the leading researcher on Americans’ “mindless eating” habits, and Buettner is a big picture thinker who has created what is essentially the Holy Grail of public health.

Vitality City is more than a program or set of policies. It is a movement, one that seeks nothing less than to make America a fundamentally healthier and happier nation. And it begins in the Beach Cities.

“This needs to be the epicenter for change for the entire nation….So people can say, ‘This was the place,’” Burden told a few dozen local dignitaries who’d gathered at Eat at Joes.

That gathering was significant in many ways. The Beach Cities Health District late last year won its bid to make Manhattan, Hermosa, and Redondo Beach a Vitality City – more than 60 cities nationwide sought the distinction – in no small part because BCHD CEO Susan Burden and chief health officer Lisa Santora achieved a rare political feat. Every City Council and school board, in addition to the BCHD board, unanimously agreed to join the Vitality City quest. Never before had each member of every elected body in the Beach Cities unified in such a manner.

The Vitality City movement arrived at a critical time. Americans have never been less healthy.

According to the Center for Disease Control and Prevention, 68 percent of American adults are overweight or obese. One out of every three adults is obese, as are 17 percent of Americans aged 2 to 19. Twenty years ago, only four states had obesity rates over 20 percent; today, all fifty states do. The upshot is that Americans are dying younger. A CDC study last year found an overall dip in life expectancy as the average American lost a month of their lives, from 77.9 to 77.8 years – an extremely rare occurrence in industrial nations. If obesity rates continue to grow, the National Institute on Aging projects a loss of five years in life expectancy throughout the U.S.

The Beach Cities are not an exception. According to a survey conducted late last year by Gallup, 60 percent of Beach Cities residents are overweight, a figure believed to be conservative since it relied upon self-reporting.

“We are such a beach-oriented town, yet 60 percent of Beach Cities residents are overweight or obese,” Santora said. “A lot of people, when they hear this, are taken aback – they have a conception of us as the volleyball players you see at the beach, or the people riding bikes on the Strand. Healthy behaviors are often the most visible behaviors.” 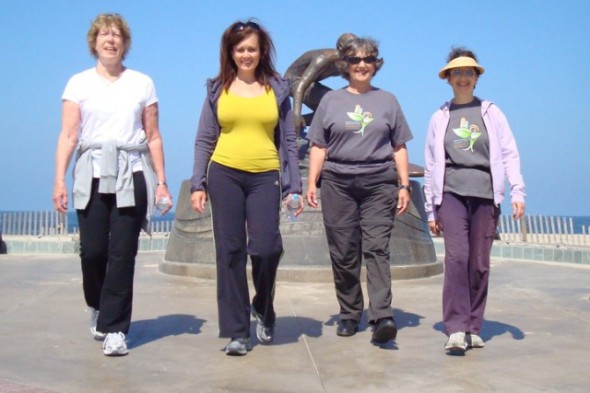 A walking moai, one of 104 such groups formed as part of the Vitality City public health initiative.

Obesity rates in the Beach Cities were not the most shocking numbers in the poll, which is part of a national measurement called the Gallup-Healthways Well-Being Index (WBI). The WBI provides daily snapshots of 188 U.S. cities, surveying Americans’ physical and emotional health. The WBI data revealed high levels of stress, anger, and worry locally – the Beach Cities ranked 176 out of 188 cities in stress, 160th in anger, and 178th in worry.

By way of national comparison, the Beach Cities are angrier than Detroit and as stressed out as New Orleans.

“If you think about it, these are pretty scary numbers,” said John Harris, a vice president with Healthways, the employment health company that partners with Gallup in producing the Well-Being Index. Healthways, a firm that works with employers in finding ways to address employee health issues, also partnered with Buettner’s Blue Zones team to create the Vitality City project. A key part of the project is evidence-based and data-driven; Gallup will do its WBI assessment each year of the three year duration of the Vitality City project in the Beach Cities.

“I’ll be honest with people: we are not doing what has been done before,” Buettner said. “Every component of the Vitality City project is evidence-based. But nobody has brought them together the way we are bringing them together. So, in a way, the Beach Cities are part of an expedition team that I think is going to lead America in a new way of thinking about health, about making a community healthier.”

Buettner vowed that the movement has just begun.

“I think we just showed them a glimpse,” Buettner said. “But the South Bay of L.A. – if we can do it here, we’ve proven to the rest of America it can be done….I just know all eyes will be on us, and we will prove we can do it.”